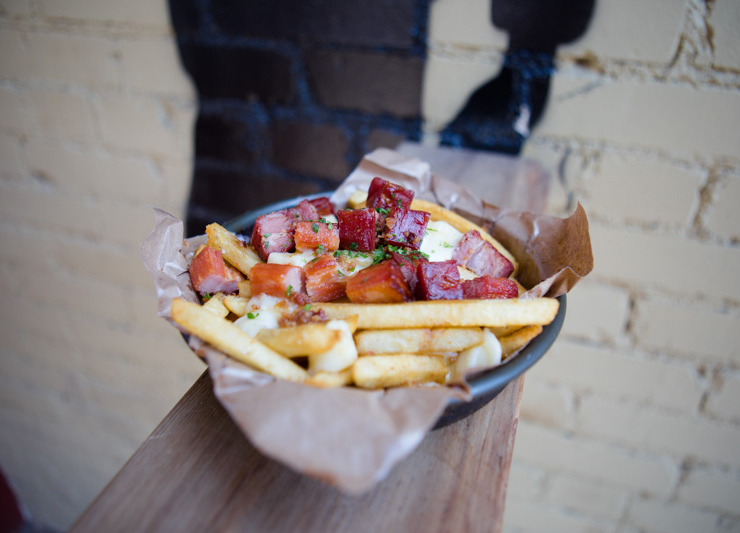 You’ve Gotta See The Pork Poutine At The Blind Butcher.

There are a lot of things that Texas does right in regards to dining — things like barbecue, day-drinking and insane rates of restaurants per capita.

But one thing Texas — or more precisely, North Texas — isn’t exactly known for is poutine.

Maybe it’s because Dallas is a thousand miles away from the Canadian border. Or perhaps it’s because, in Texas, there are just so many other food trends going.

Regardless, poutine hasn’t quite found its way to the forefront.

But the folks at The Blind Butcher are doing what they can to change that. And it’s working: Since it opened up back in January, food critics all around town have been talking about the spot’s duck poutine specifically.

And Oliver Sitrin, head chef at Blind Butcher, says the buzz isn’t just in the media. He claims he slings up to 50 of these suckers out each night.

Of course, the duck poutine isn’t the only poutine on the menu. There are two other kinds currently being served — mushroom and pork belly — with a third (shrimp) set to soon become another permanent fixture.

Listen: There’s good reason the poutine — as well as the Blind Butcher as a whole — has found such rousing success. The entire bar — restaurant, gastropub, whatever you want to call it — is painstakingly deliberate in its approach to its specialties. And Sitrin has his kitchen running like clockwork.

And at least three chefs are involved in the crafting of the pork belly poutine alone.

Here’s how it works.

Sitrin scores and cuts whole pork belly — a beautiful blend of fat and meat, the likes which would make any bacon-lover drool — into two large pieces, which are then hung from a rack inside the kitchen’s modest smoker. Sitrin likes to change up the genus of wood chips regularly, saying it keeps the taste unique with each new batch he gets. (This week, he’s been using a mix of pecan, apple and hickory.)

As the meat smokes, another chef slices the house-pressed mozzarella cheese curds into cubes. The pressing process is one of the more time-consuming requirements of the poutine. The cheese, bought from Deep Ellum’s world-renowned Mozzarella Company, arrives in large two- to three-pound masses. The cheese is then removed from its bag and set on a baking sheet, which is then wrapped in cling wrap and pressed in the cooler to create the dense curds used in the dish.

While all of this was going on, a chef known simply as Canada in the kitchen works on the sauce that will grace the mix of fries, cheese and meat. This process is also an involving one. Each poutine dish has a slightly different sauce, though they all have a similar sweet finish. Canada tells me it’s maple syrup that gives his sauces that unique quality.

As his name indicates, Canada is the only true Canadian on staff — which, one would think, makes him invaluable resource in the crafting of the poutine at the Blind Butcher. And maybe he is — although no one in the kitchen lets on.

While the sauce simmers, Sitrin opens up the door to the smoker, allowing the escaping smoke to fill the air with its unique, heavy aroma. The fully cooked stomach has a wonderful red and gold skin once it’s ready, while the inside looks like it would go wonderfully with some eggs if sliced thickly. In this instance, the stomach is cut to fit into a specific container and then sliced into three fingers for each poutine dish. The fingers are then cubed to go along with the cheese and fries. Excess pieces of meat are used in other dishes; the kitchen never throws away such prime meat.

From here, all that’s left is assembly. Fries are seasoned with a house-made spice mix — another lengthy process, requiring the cooking and grinding of specific peppers. The cheese curds are then mixed evenly throughout the fries, ensuring an even distribution of melted mozzarella.

“I make this dish like I make my nachos,” Canada says. “I layer the cheese.”

After the cubed stomach is added in, the sauce is lightly drizzled and brushed on top of the dish, assuring that the fatty meat, the lush cheese and the fried spuds get all that sweet tinge to them.

When finished, the dish — and, mind you, between the smoking, curding and preparation processes, it takes a full three to four days to make the whole thing — is something entirely unique, and entirely filling. And the sauce is what really sets the dish apart, providing a depth of flavor beyond the usual gravy. It’s marvelous: The fries soak the maple syrup infused-sauce, and the slightly melted cheese and perfectly smoked pig belly creates an amalgamation of flavor that demands to be paired with a craft beer –preferably something dark — for washing it all down.

Truly, it’s dishes like this one that seem to properly set up the Blind Butcher as one of the great gastropubs of the area. So we couldn’t help but we sot down with Sitrin and Canada to have a chat about the way things work in the kitchen.

So you’ve heard the old adage about drinking yourself blind, yes? Is that the reason for the name the Blind Butcher?
Sitrin: No, but that’s a good one!

Then why the Blind Butcher?
Sitrin: We just came up with a funny name, honestly. We had a lot of names in mind, and that’s the one everyone kind of liked.

You held a soft opening back in January. Why not go for broke right away?
Canada: We wanted to establish baseline prep levels, because everything takes time. It wasn’t smart to try to open with a menu unless we had a month to prep — which we didn’t. But we wanted to get people in and get people excited about the space and give away food at first and let them drink.
Sitrin: The bottom line of that is that it wasn’t because of the menu, it was because of the time it took to finish the kitchen. We needed to open up as soon as we possibly could. We didn’t have time to spend a month in the kitchen, prepping like you should do. Instead of opening up as a shitshow and not knowing what the fuck we’re doing, we opened up and just gave away food for a little while and let the bar do its thing while we got our footing.

Obviously, with the name of the space, you were going to have a meat-heavy menu. What made you want to put poutine on it?
Sitrin: I think it’s great drinking, partying, having-a-good-time-going-out food. Go out, grab some beers and, if you start getting hungry, share some poutine with friends and keep going. At the end of the night, I would much rather have a duck or pork or mushroom poutine and then keep going.
Canada: When we first were talking about it, when [Sitrin] first said it, I was like “Oh man, we could make it good.” We didn’t just slap it together, we took our time and did it right and made it actually impress people. It has a depth which reflects our skills and what we do. We’ve all spent a long time getting better and better. Applying that to something simple — like, back home, they use a lot of packets and powdered gravy mixes — I just wanted to take what I knew from back home and almost elevate it. And I’m not the only one doing it; there is a restaurant in Montreal that has like 25 poutines on the menu.

When you were crafting the dish, did the staff rely on Canada’s homeland expertise?
Canada: It was more collaborative, I would say. [Sitrin] had a vision of, like, two to three that he wanted, and then it was a question of how we would execute it. He gave me the freedom to try and do my own thing on some of the stuff. I’d bring it back to him, he’d taste it and then say, “Oh, it needs this or that. Let’s try this.”

Were there other poutines that didn’t make the cut?
Canada: We are actually rolling out a shrimp poutine. We actually have a lot of ideas for them, but it’s a lot of practicality. It’s hard to get rid of what we have because people like it. We’re playing around with the shrimp one. That’s pretty cool.

What kind of shrimp will you use?
Sitrin: We’re going to use gulf shrimp, since they’re the closest shrimp to us.
Canada: They’re nice, the gulf shrimp. We compress the cheese curds with parsley and lemon, so they’ll actually turn green. It looks like it’s avocado on there, but when you take a bite it’s got a nice bright taste. We wanted to do that because of the hotter weather. We wanted to be able to have this but not have it be super heavy — to try to lighten it up, brighten it up for spring and summer. We’ve got a lot of other ideas that we haven’t really played around with yet.

How’d you settle on these four?
Sitrin: I knew that pork belly poutine and duck poutine were going to be on the menu. The thing is that, in the kitchen, we don’t waste anything. So if I put something on the menu, I have to have an outlet for anything that may go unused. I’m not going to bring in one item and waste anything.
Canada: It makes sense. We get in whole ducks for other things, so we have the duck bones. So it makes sense to make duck stock. And then it makes sense to make gravy from the duck stock. It follows a logical progression of the other areas of the menu complimenting what we do overall.

How would you categorize the Blind Butcher? Would you call it a gastropub? A bar? A restaurant?
Sitrin: To begin with, it was always a bar that had really killer food. But I always said that I hope it’s perceived as a gastropub. We’re making our own demi, we’re doing our own sauce work. We don’t have canned shit. We;re doing as much stuff in-house as we possibly can possibly squeeze out of this tiny space. In doing that much work, I think it is perceived as a gastropub. This is elevated, good bar food.
Canada: Labor-intensive, locally sourced. We really care. We have a small team and everybody really, really cares about what they do. And it carries over to the front of the house, too. 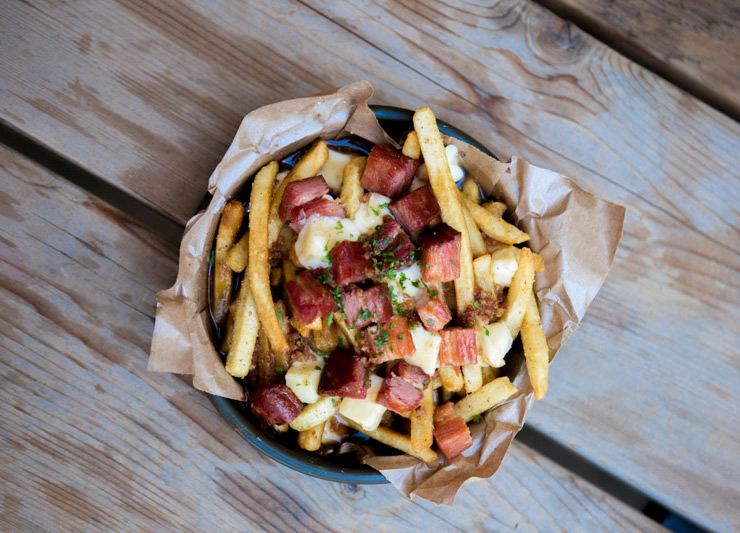 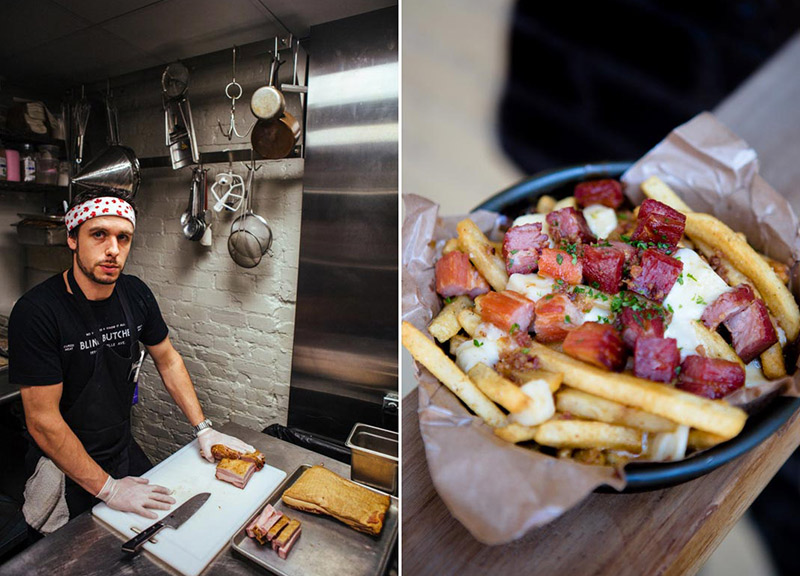 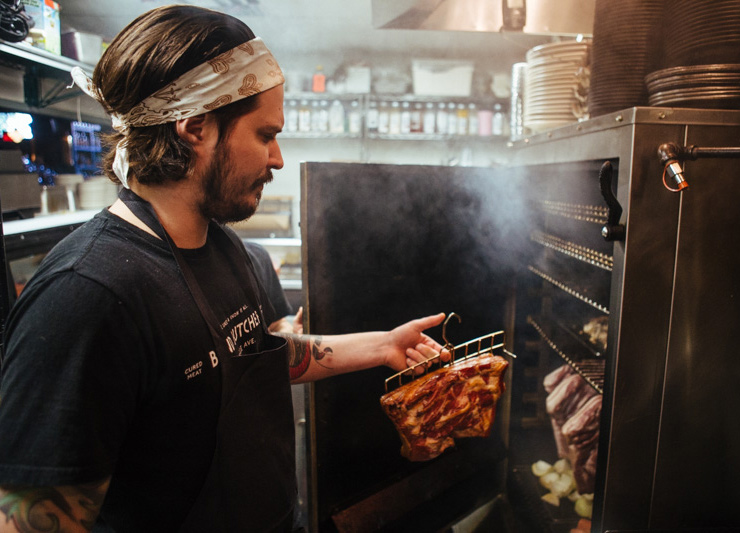 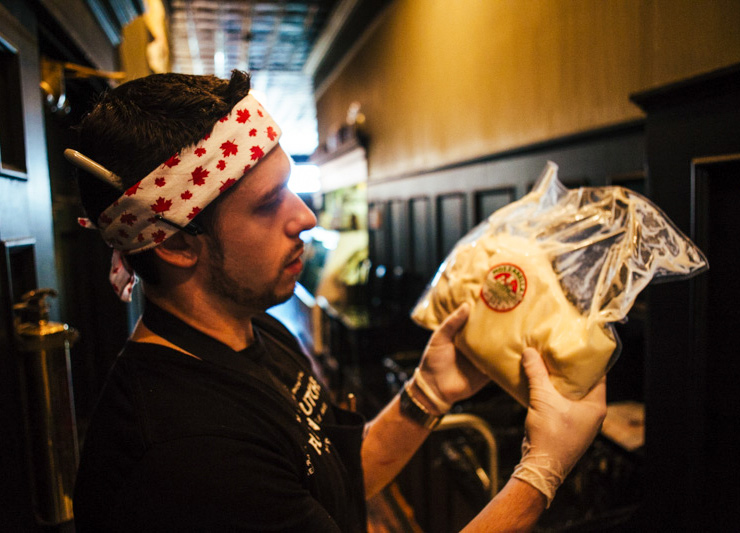 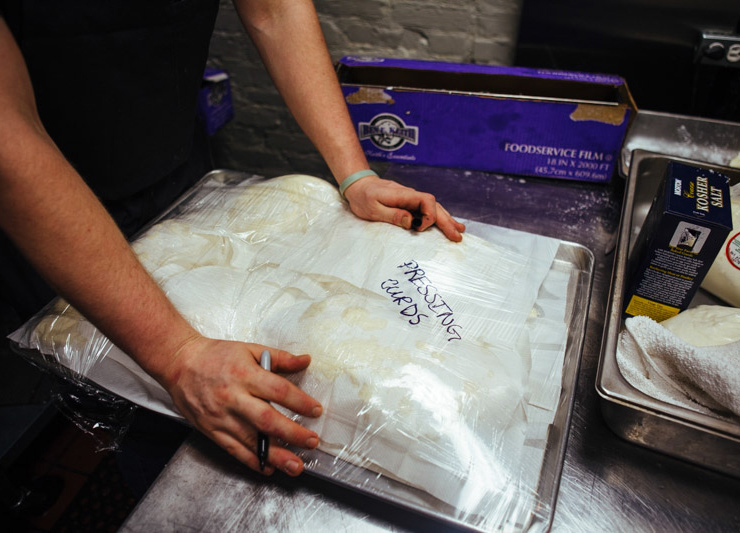 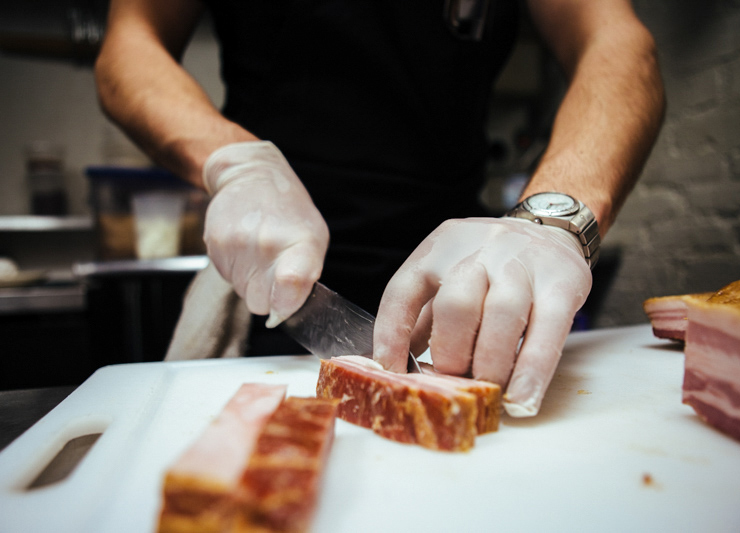 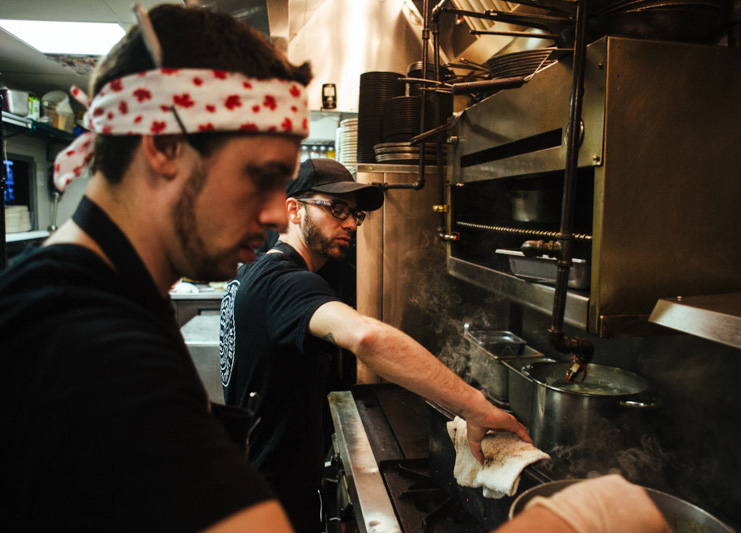 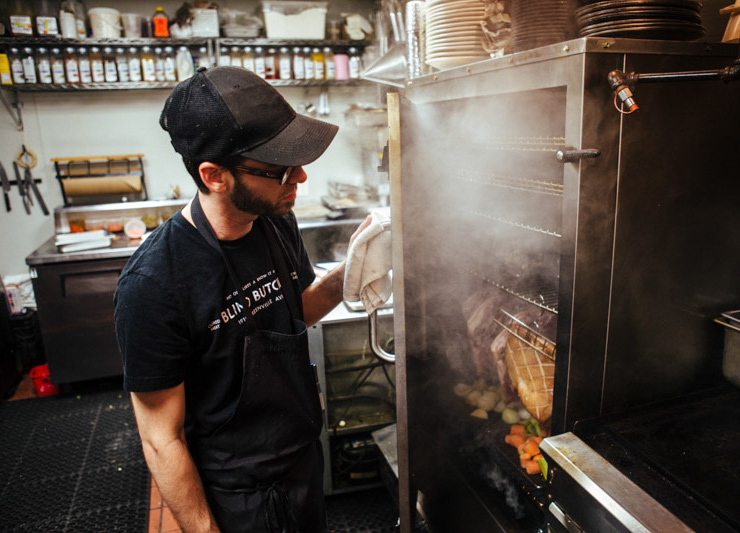 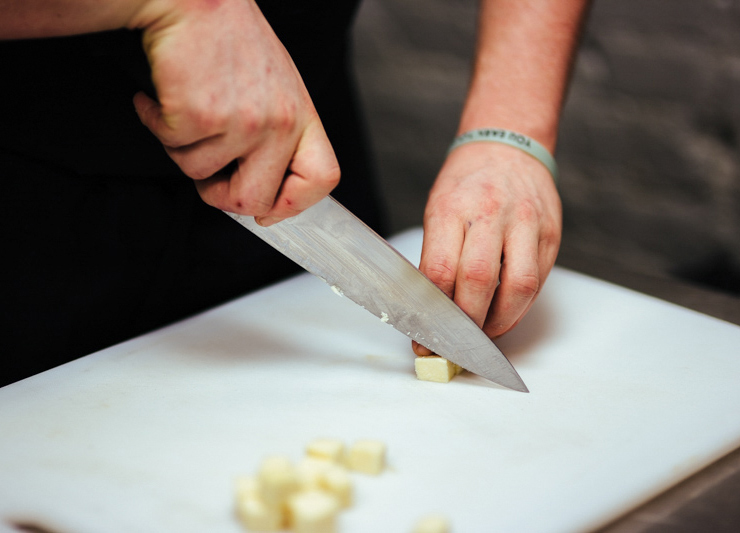 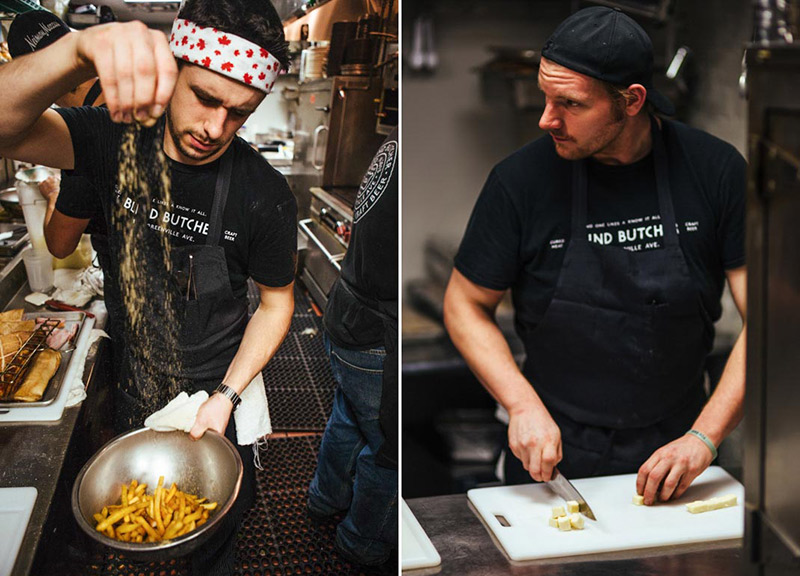 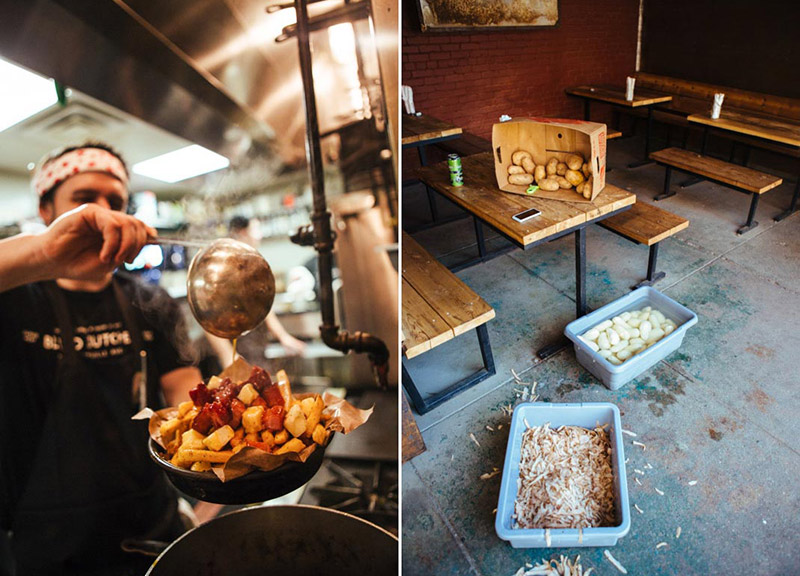 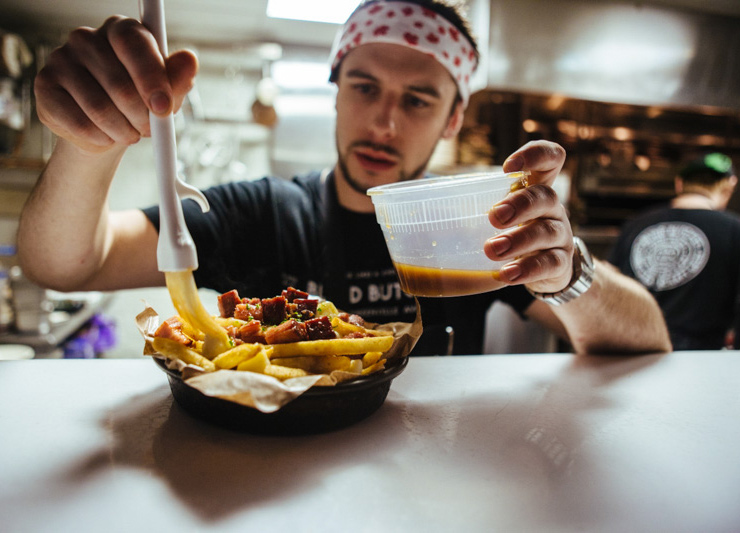 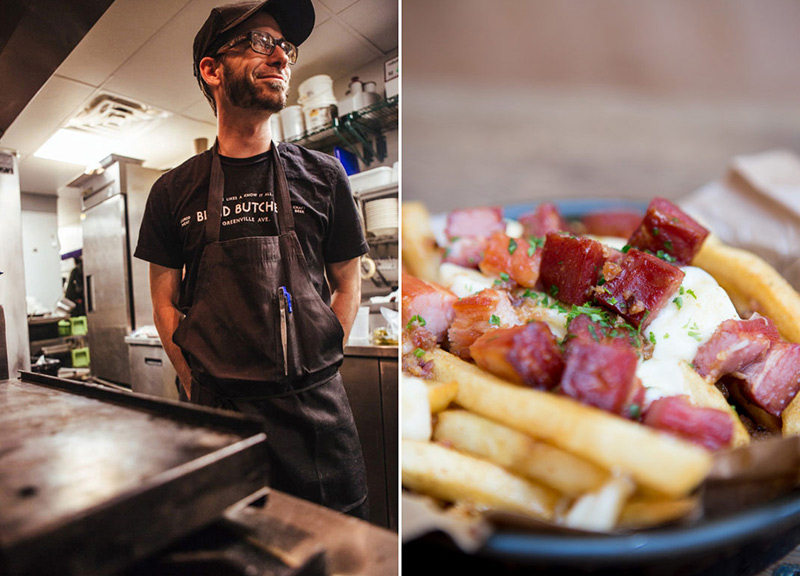 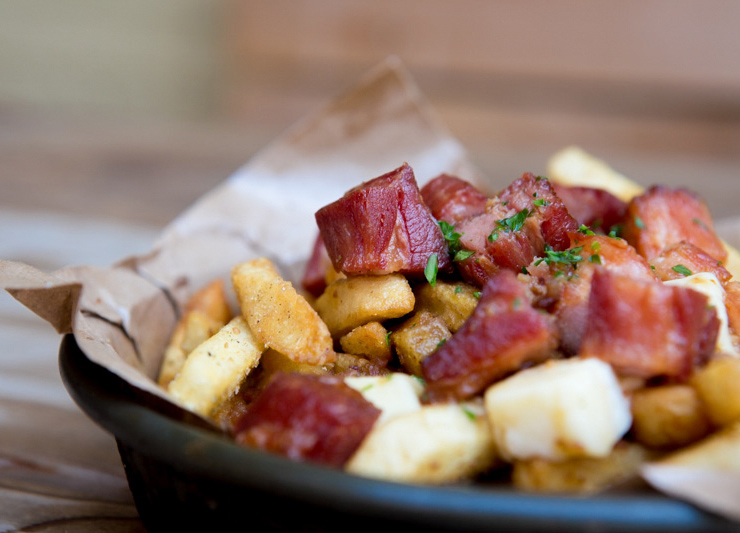 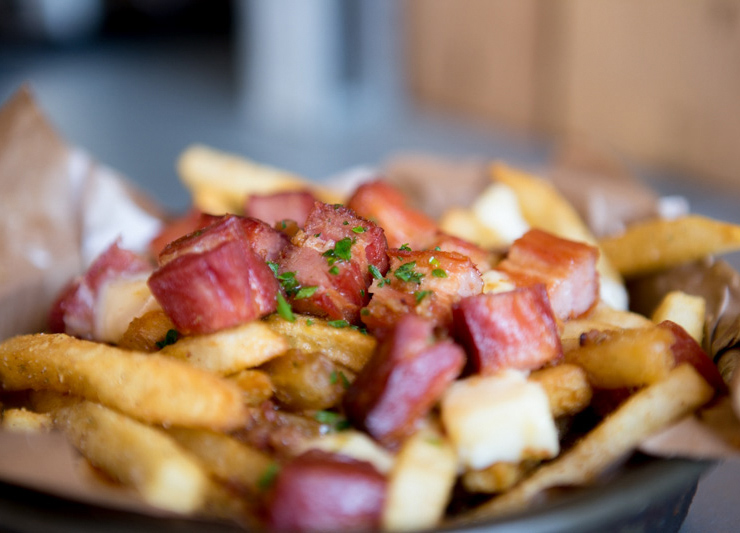 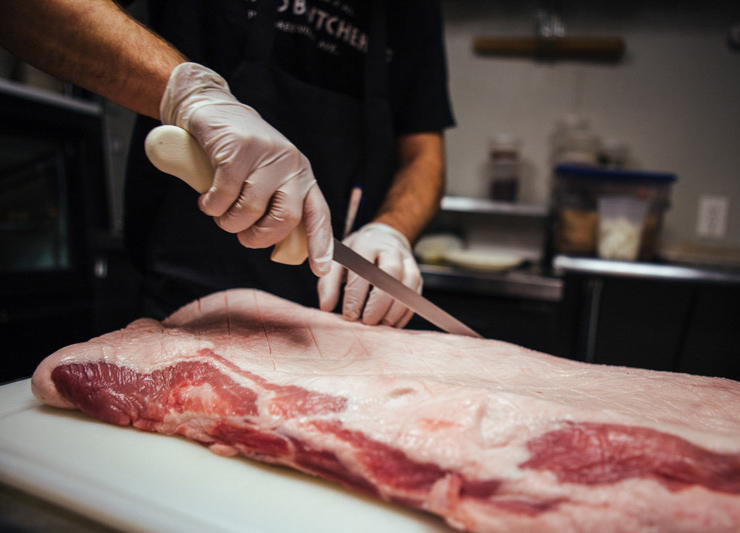 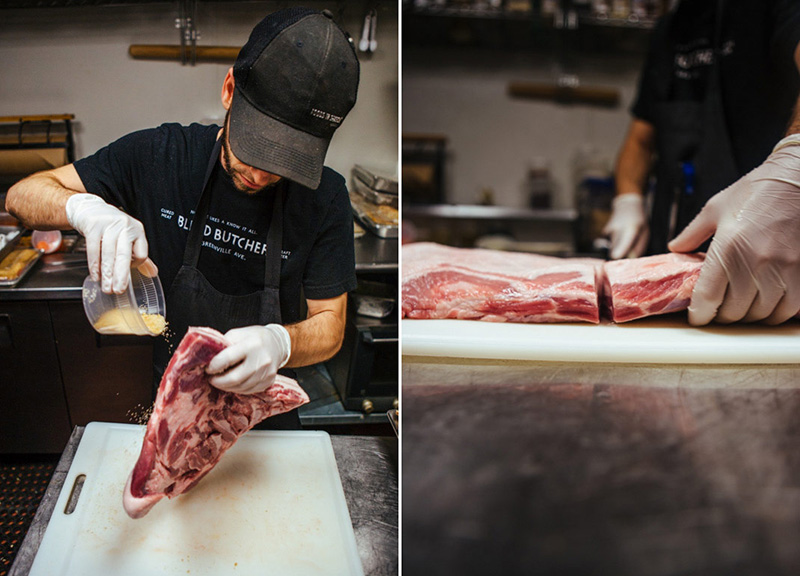 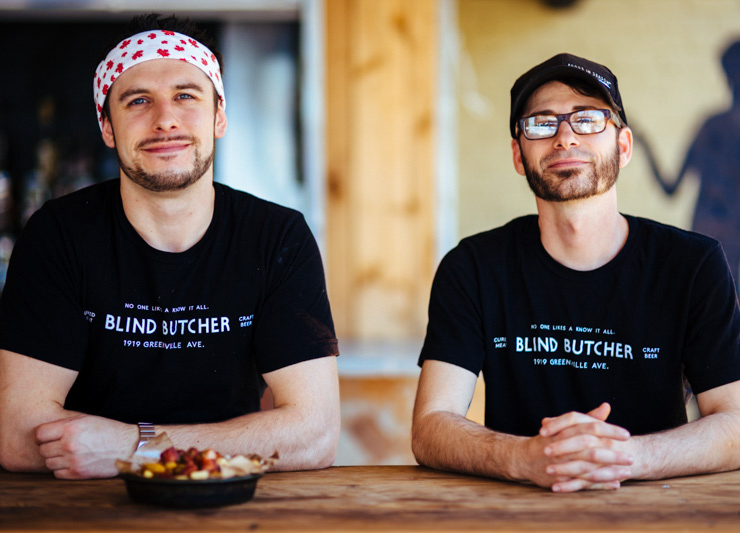