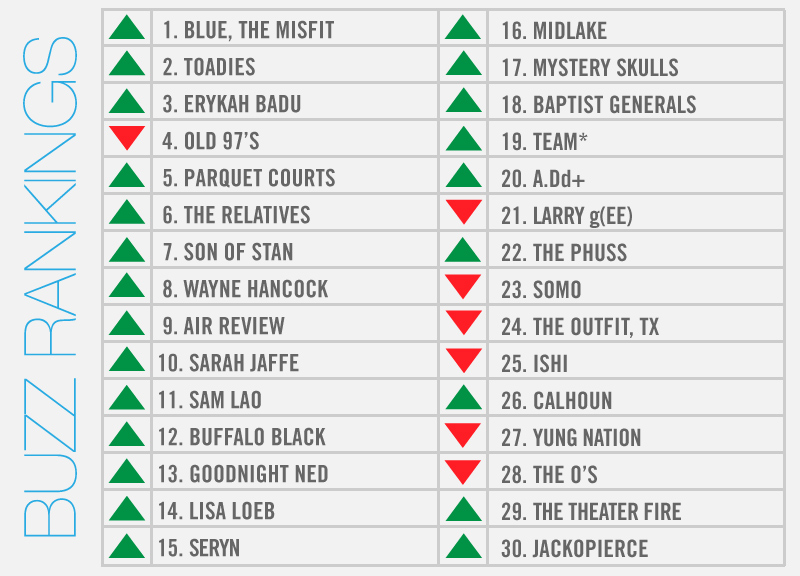 Ever since debuting its Rubberneck set at SXSW the Toadies have been touring the country playing that seminal album from front to back. So far, though, that lone Austin performance has been the closest the band has come to repeating the feat in front of its hometown fans.

That, of course, will change when the band headlines this weekend's fifth annual Homegrown Music & Arts Festival at Main Street Garden Park. After that, frontman Vaden Todd Lewis told 1310 The Ticket's afternoon drive show “The Hardline” earlier this week, if the crowd is still into it, they'll play a bunch more songs that are less than 20 years old.

In any case, the anticipation of said event is pretty high.

Still, it wasn't enough to overcome Blue, The Misfit, who climbs to the top of our local music power rankings for the first-ever time thanks to the release of his long-awaited Child in the Wild LP earlier this week.

That sucker's been praised in just about every publication in town thus far — including our own. Says Mikel Galicia of the album: “There's no denying Blue's resume: From his earliest days in Sore Losers to his production work for national artists and, more recently, his cultivation of an impressive hip-hop collective to call his own, the guy's accomplished plenty. Child In the Wild, however, is his greatest accomplishment to date.”

Topping our Buzz Rankings, we imagine, registers a close second.

Impressively, Blue held off a whole slew of the Toadies' fellow participants in the Homegrown bill this week — including The Baptist Genearals, Calhoun, Seryn, The Phuss, Mystery Skulls, Sam Lao, Goodnight Ned, Son of Stan and Sarah Jaffe, each of which made its way onto our chart. Additionally Son of Stan and Jaffe both confirmed the release of new albums this summer, Goodnight Ned released a brand new music video featuring a single off its own upcoming release and Sam Lao debuted a new music video.

But Homegrown wasn't the only festival game in town this week. To that end, performances at Plano's inaugural Suburbia Music Festival last weekend also helped acts including Midlake, Ishi, Larry g(EE), A.Dd+, Yung Nation, SoMo and The O's earn their own spots in this week's rankings.

Elsewhere, The Relatives earned a placement on FX's Fargo, Lisa Loeb and Parquet Courts similarly showed up on the small screen, and TEAM* released its second EP.