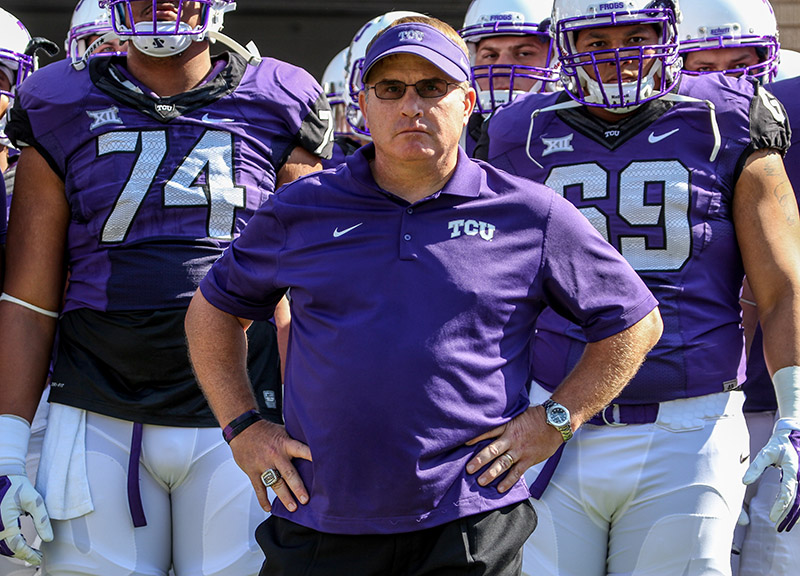 Following Saturday's 42-9 Victory Over Oklahoma State, TCU Is Back In The Top 10.

For the second time this season, the Texas Christian University Horned Frogs are a top 10 team in the country.

This week's jump from No. 12 to No. 10 follows a 42-9 dismantling of then-No. 15-ranked Oklahoma State. The win capped off a three-week stretch against three top 15 Big 12 teams, in which TCU walked away 2-1. But Saturday's win was the team's most complete effort on both sides of the ball: With the offense and defense clicking the way it did Saturday afternoon in Fort Worth, TCU looks poised to make a run for the Big 12 Conference Title.

“This group cares,” said TCU head coach Gary Patterson when asked about bouncing back from last's week loss to Baylor. “When you get a group that cares and they play together, then you're gonna have a chance to win football games.”

This week against Oklahoma State, Patterson saw the two visions he's had for this team come together.

The defense, which has traditionally been the backbone of the program under Patterson, held Oklahoma State without a touchdown and also held that Cowboys offense to just 258 yards — the fewest yards by an Oklahoma State team since 2009.

After the game, Patterson noted that his team played the same defense he did last week against Baylor when they gave up 782 yards of offense and 61 points; all he did differently this week was make sure to put his players in better positions. Those moves paid off: Linebacker Paul Dawson led the team with 13 tackles in the first half alone and the secondary had two interceptions with help from a front seven that had five quarterback hurries. The Cowboys' offense was stagnant.

The Horned Frogs' offense, however, was quite flashy. Patterson's new air-raid offense put the Horned Frogs in control right from the get-go. Early in the first quarter, TCU scored three times on four plays with a 34-yard rushing touchdown from running back B.J. Catalon and a pair of touchdown catches by wide receiver Josh Doctson for 77 and 84 yards.

The offensive production this week wasn't anything new, though. Quarterback Trevone Boykin has played well in each game this season. In fact, his 1,873 passing yards, 14 touchdowns and four interceptions on the season are nearly identical to Heisman frontrunner and Mississippi State quarterback Dak Prescott's numbers.

But, as good as Boykin has been, running back B.J. Catalon has been just as vital to the Horned Frogs' success. Catalon leads the team with 10 touchdowns and 744 all-purpose yards. He provides a spark on offense whether he's running the ball or catching it, and his contributions on special teams are invaluable.

After the game, the recurring thought from players and coaches was that they played a complete game across the board. After last week's loss to Baylor — in which TCU blew a 21-point lead in the fourth quarter — playing a complete game was Saturday's most important goal.

“We knew that taste we had in our mouth after the Baylor game,” quarterback Trevone Boykin said. “We made a promise to our team and ourselves that we really don't want that anymore. So we just came out today and played four quarters.”

Still, TCU is far from being on a clear path to winning the Big 12 title. In the coming weeks, the team still has to face a West Virginia squad that just blew out Baylor and a Kansas State team that's climbing the polls and just beat Oklahoma. All the same: This three-week stretch for TCU proved that this team can hang with anyone in the Big 12.

And it was also wake-up call, of sorts: If this team can fire on all cylinders on both sides of the ball, they're a tough beat.

On Saturday at least, the Horned Frogs looked up to that task.

TCU Head Coach Gary Patterson and the Horned Frogs prepare to take the field Saturday against the Oklahoma State Cowboys.

The then No. 12 Horned Frogs run onto the field to face the then No. 15 Oklahoma State Cowboys. The Cowboys were the third straight Top 15 Big 12 opponent The Horned Frogs faced in as many weeks.

TCU running back B.J. Catalon (23) jukes away from an Oklahoma State defender. Catalon ran for 102 yards on 10 carries and scored two touchdowns.

TCU running back B.J. Catalon (23) spins off an attempted tackle into the end zone for 34-yard rushing touchdown. Catalon leads the team with 10 touchdowns.

TCU wide receiver Josh Doctson (9) breaks away from the defense for a 77-yard touchdown catch. Doctson had seven catches for 225 yards and two touchdowns against Oklahoma State

Oklahoma State running back Tyreek Hill (24) attempts to turn the corner against TCU. Hill, an American sprinter is one of the fastest college football players in the country but was held to 60 yards rushing and 41 yards on kick returns.

TCU quarterback Trevone Boykin (2) attempts a pass after scrambling out of the pocket. Patterson gave praise to Boykin's decision making on Saturday for looking to pass before running.

TCU defensive tackle Chucky Hunter (96) throws up the signal for fourth down after the Horned Frogs make a defensive stop on third down. Oklahoma State converted just three of 15 third down attempts. 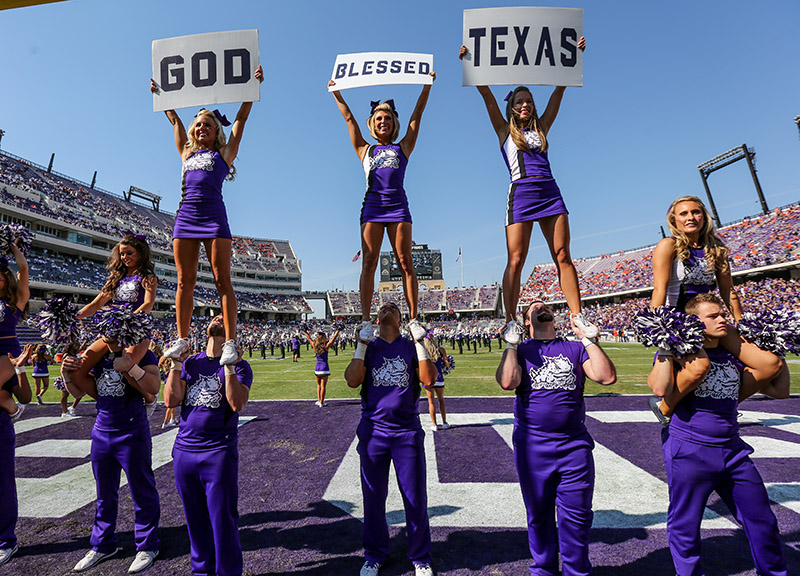 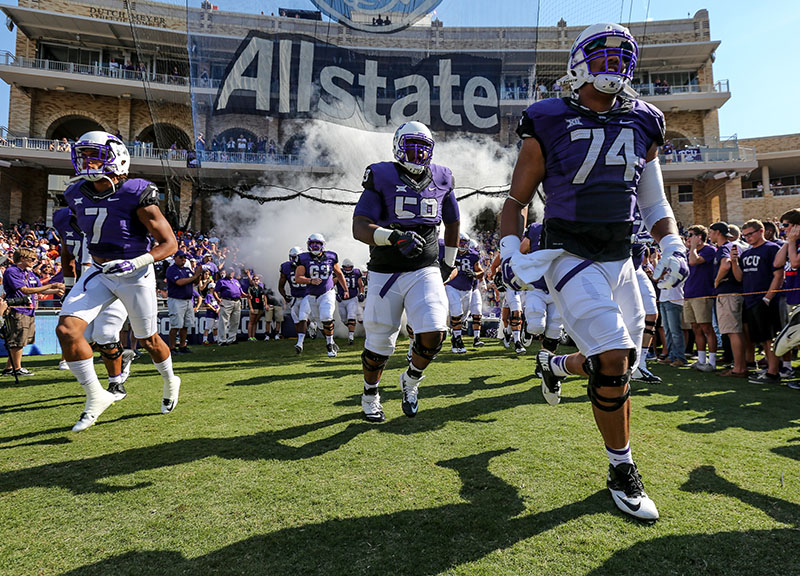 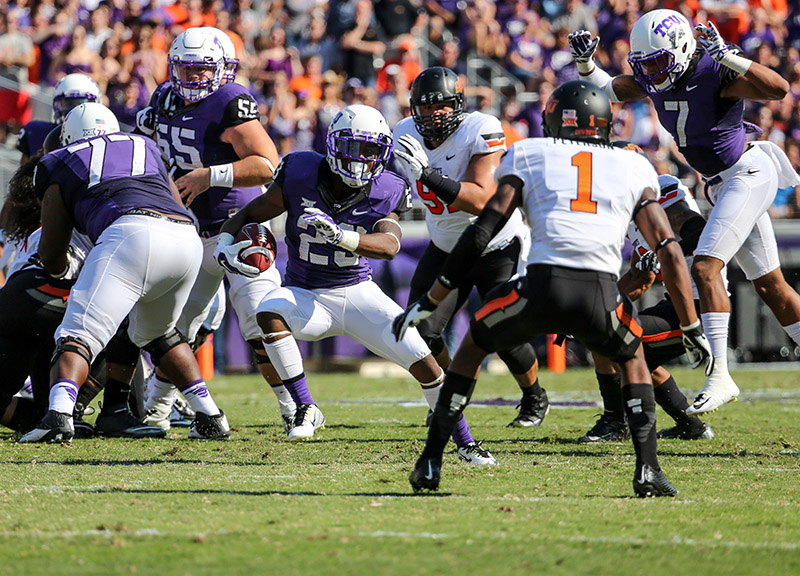 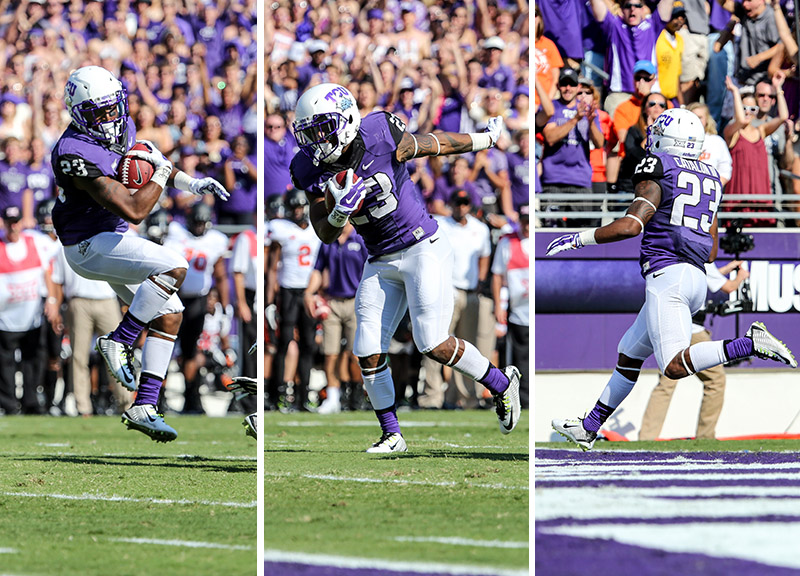 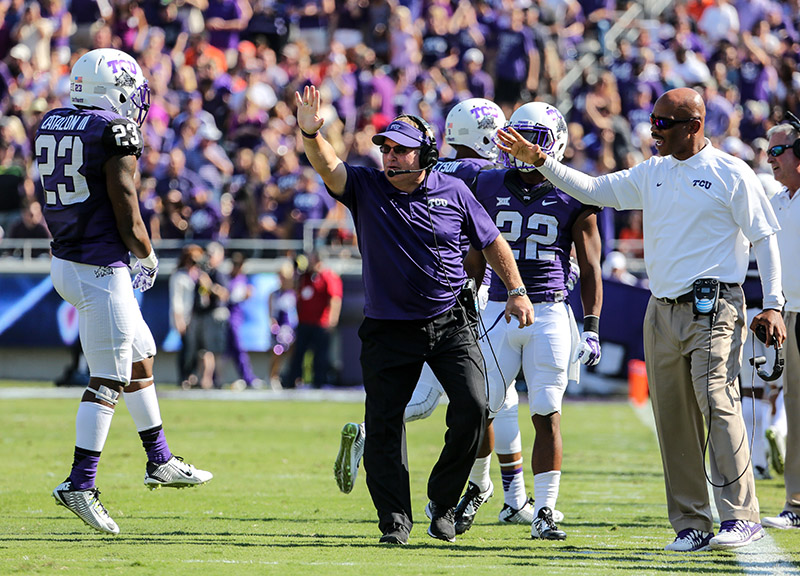 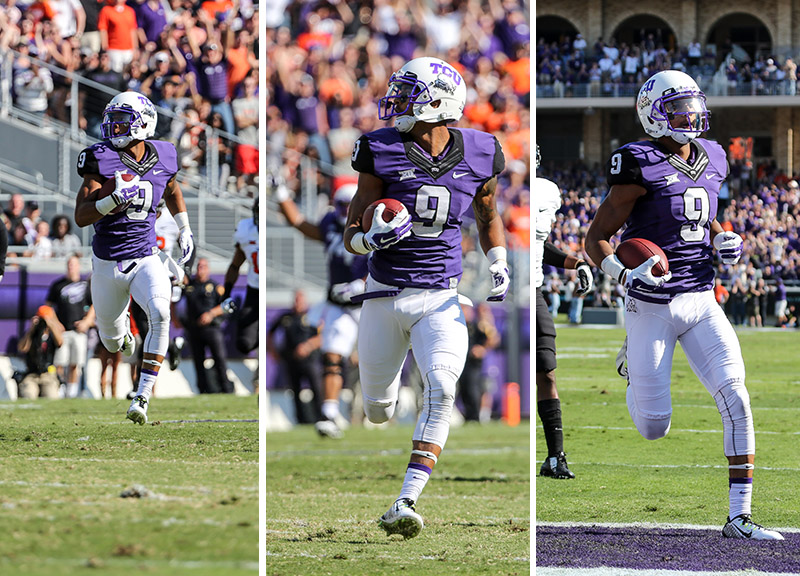 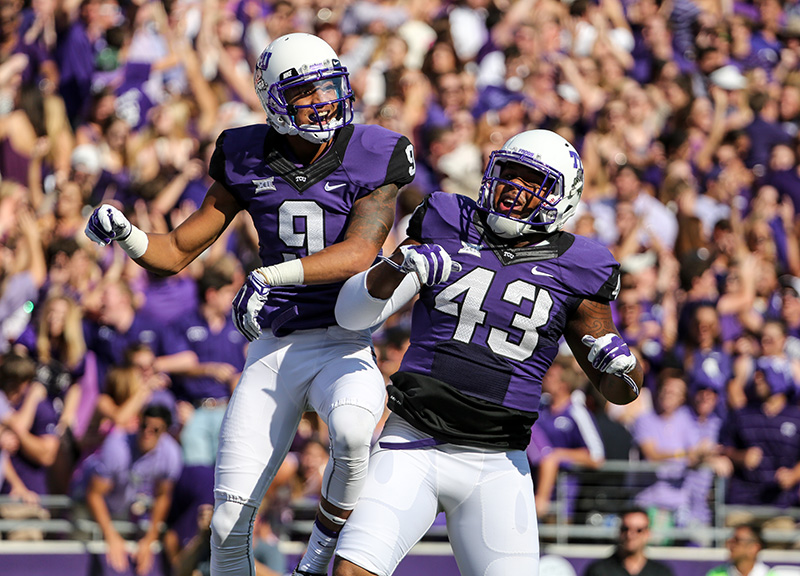 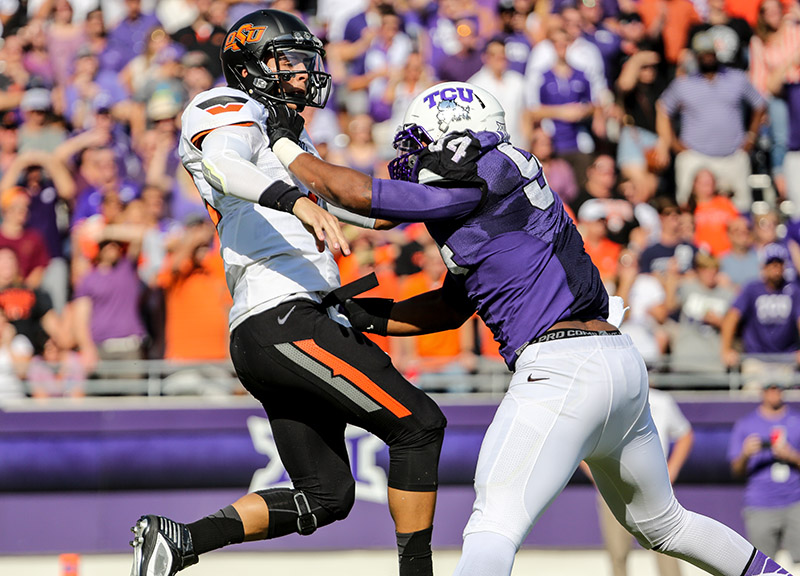 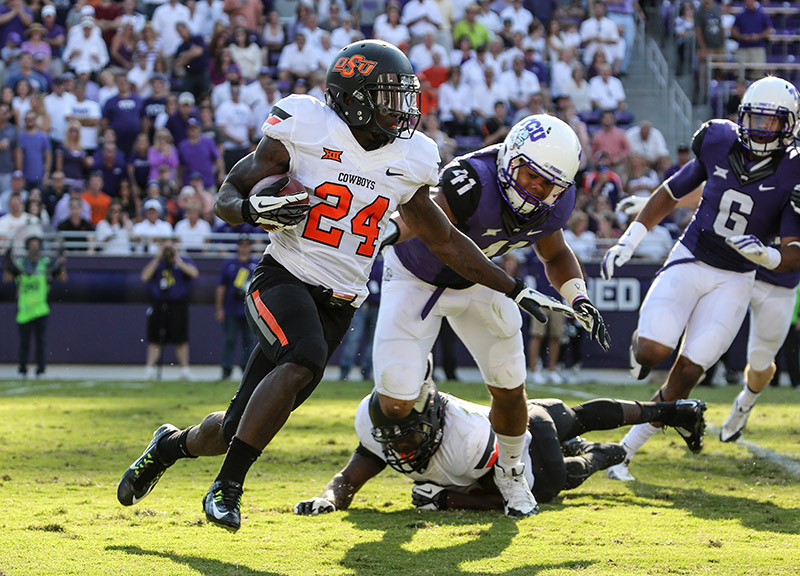 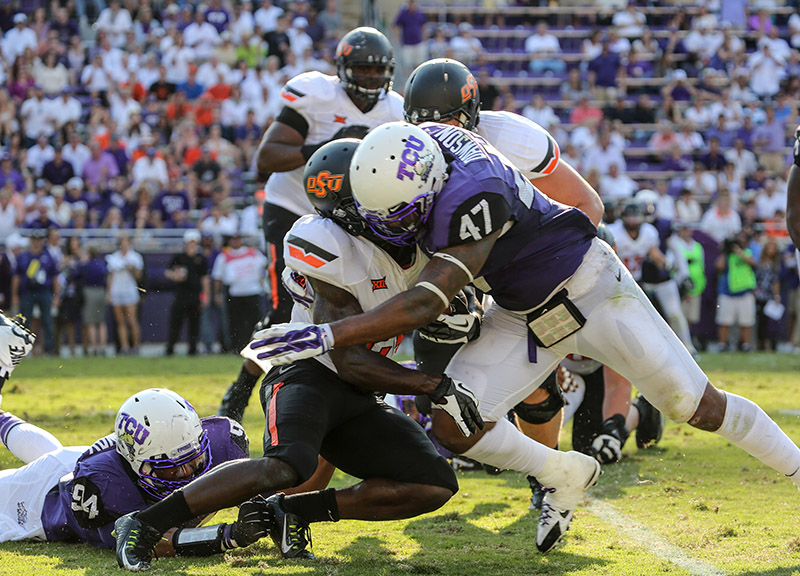 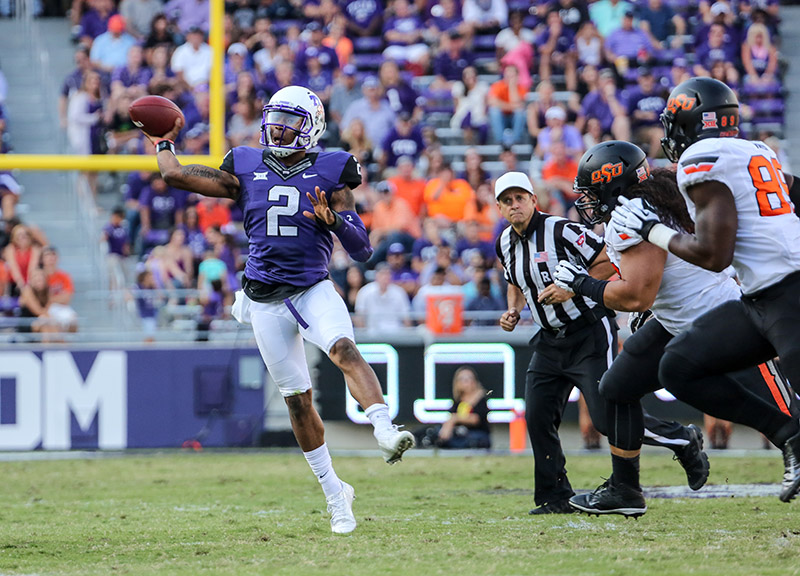 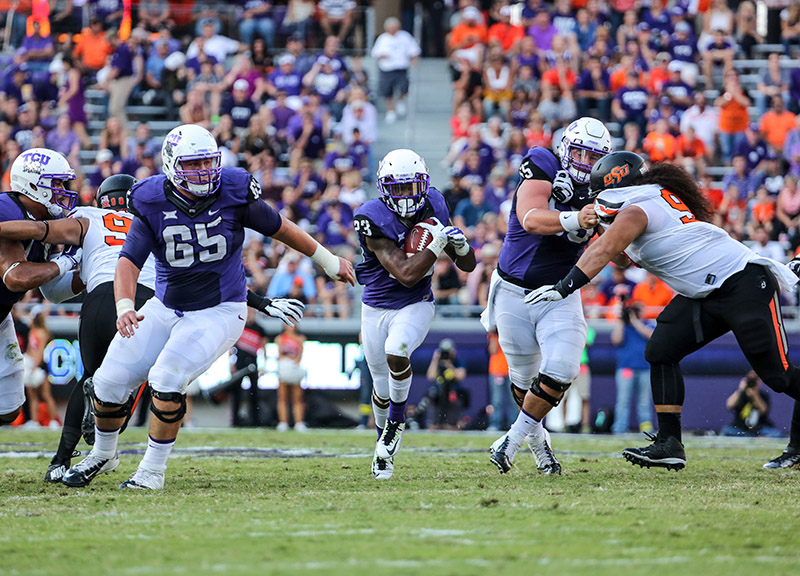 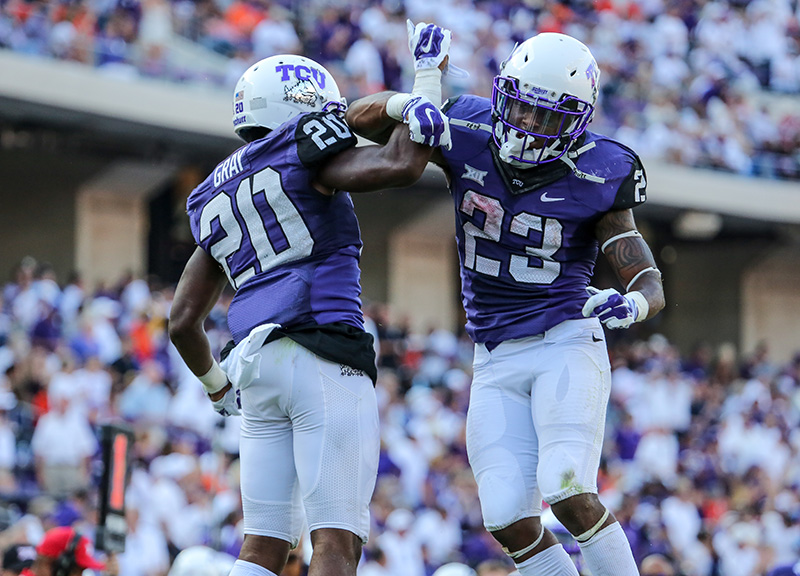 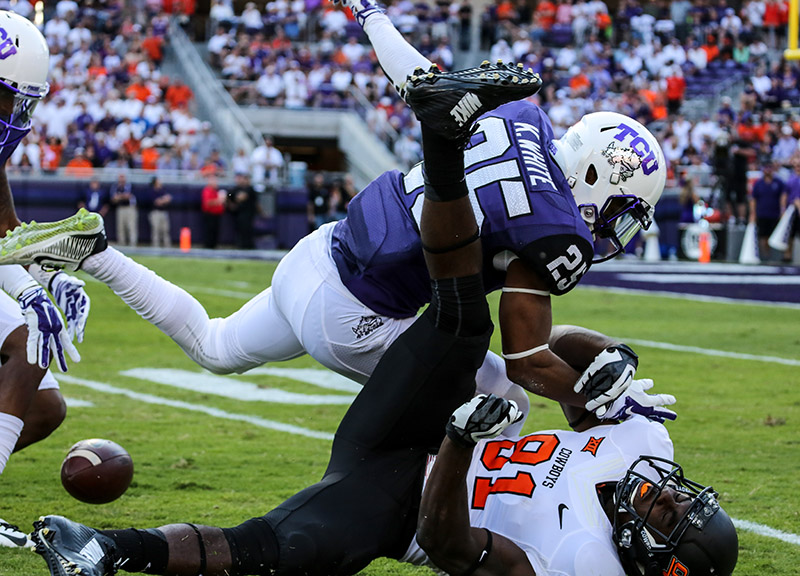 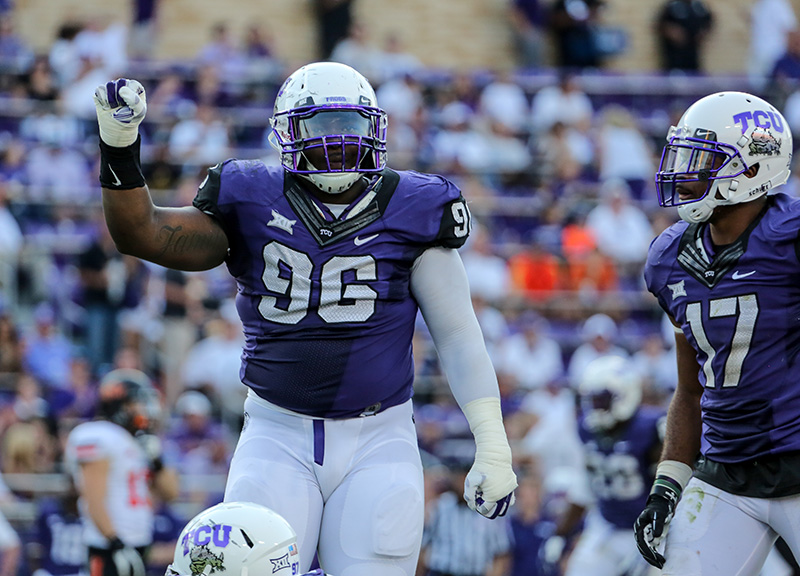 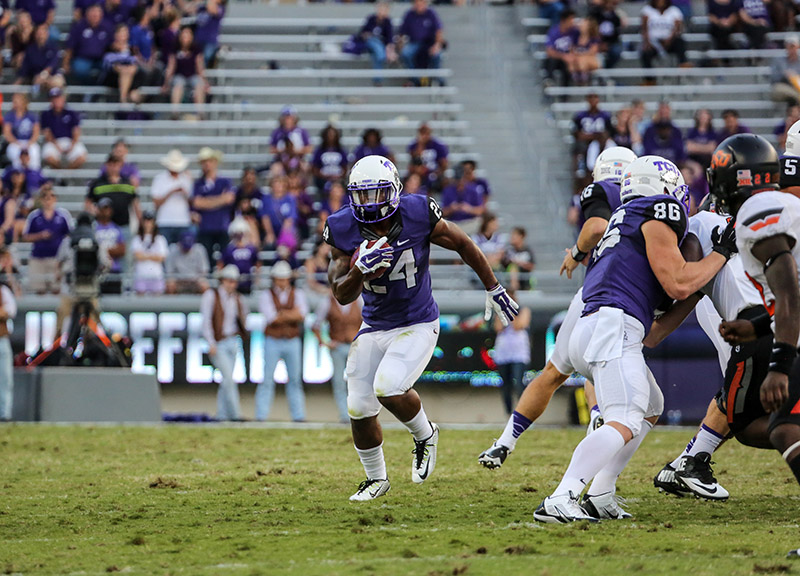 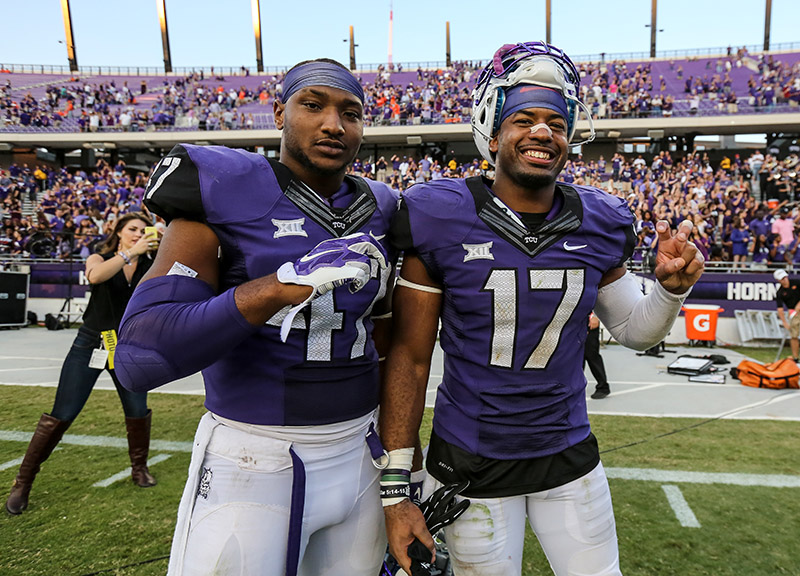 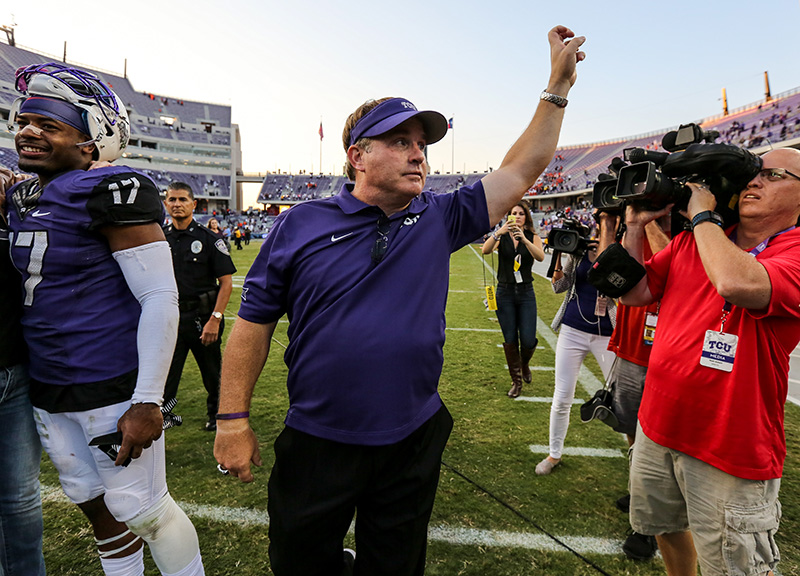