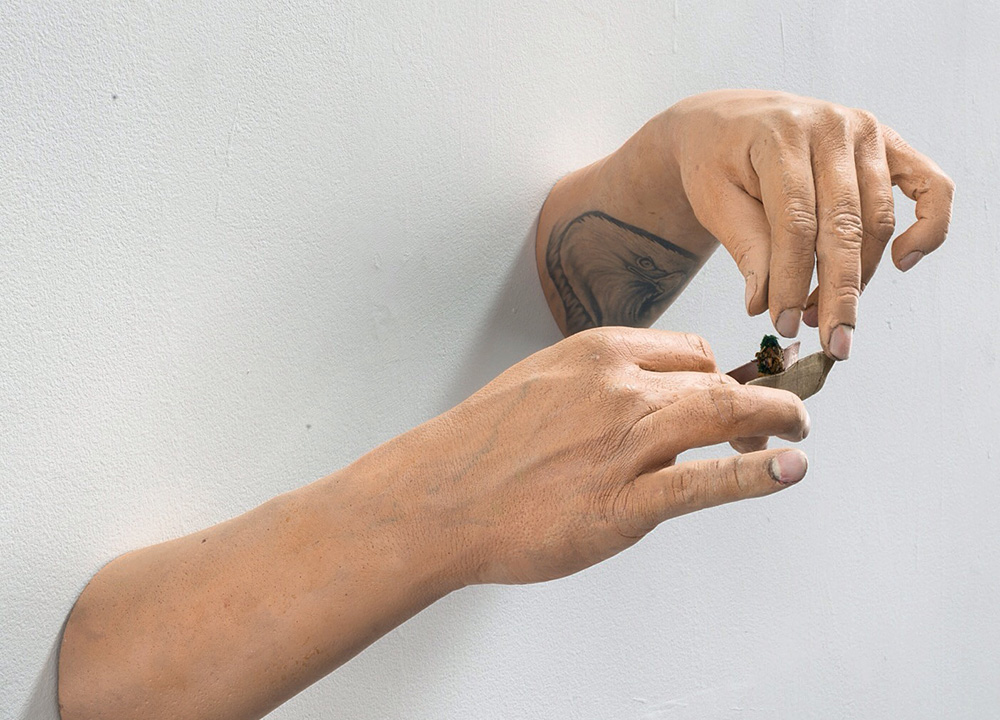 Even in high school, Sergio Garcia was a rebel.

“I got into a lot of trouble,” the Dallas artist reveals with a shrug.

Going against the grain is in his nature. Always has been. He grew up spraying graffiti on various walls around Dallas — work that can still be found all around town, branded by the legendary Infinity Crew, of which he is a founding member. Later, he flexed his hand at customizing motorcycles with intricate metalwork and detailed airbrushing. Oh, and he spent some time spent playing in a political punk band, too.

Talk to Garcia for too long about his younger days, though, and he’ll mostly casts a side-eye at that trouble he once faced. Because, today, his rebellious nature is working for him.

Operating out of the two separate Dallas-based studios he owns, Garcia now spends his days toiling with resin and flashing the abilities he first honed as a young graffiti artist. His sculptures and talents represent a raw aesthetic — one that often comes off remarkably real, so much so that his wife, the award-winning burlesque dancer Missy Lisa, sometimes can’t figure out if she’s looking at a picture of his work or of its inspiration.

This trippy nature of his work, combined with its overarching and unorthodox appreciation of street-level themes, has earned Garcia scores of fans of late. Juxtapoz, Hi-Fructose and High Times are just a few of the publications to have highlighted his work in recent years. Still, Garcia remains a humble being, a man who would rather not be required to attend his own gallery openings — or at least not to have the light shining on him all night long.

He’s one of Dallas’ most exciting artists, a creator at the top of his game and of increasing profile — his work was recently showcased at the rapper Future’s pop-up retail shop in Los Angeles — and yet he’s readily seen mingling about around town, just another guy out grabbing a beer with some friends, unrecognized by most.

Following his Future cosign and just in time to highlight a new 4/20 sculpture, we recently caught up with Garcia to talk about his come-up, his process and his thoughts on the reactions his work elicits.

In the past, you’ve said that meeting with Frank Campagna of Kettle Art is what spurred your career toward doing larger works and commissions. How’d that go down? Do you think the Dallas art scene is one of organic support and encouragement?
I think Dallas has a lot going on. It’s cool, because Kettle is like a co-op. Kirk [Hopper] was the main person involved financially, and Frank ran it and managed everything else. Now Frank fully runs it. I love the idea that Kettle works with established artists and still gives new artists a chance to shine. So that was cool. I learned a lot, because Kettle took us to our first art fair — the Affordable Art Fair in New York. And then Kirk took us to Art Now in Miami during Art Basel, and all these fairs that really opened my eyes to what I wanted to do. Kettle is one of those galleries that gives people a chance. Kirk wanted to open a new gallery for emerging, mid-career artists so they would get recognition alongside the established ones. It can be hard to get into that setting, but it’s cool that Dallas has that — and it’s done really professionally. People would be like, “Hey, man, just go to Kettle. It’s where it’s at.” You start learning the ropes of what to do, what not to do. Galleries are kind of like record labels. I used to be in a band. I think I learned a lot from jumping in a van and touring. It’s the same way I did my work — started messing with this gallery or venue, then this gallery. And now I’m pretty fortunate to where I may get a lot of offers, but I can work with my main folks and put myself in the right opportunities.

How did you go from doing graffiti to doing the 3D, sculptural stuff?
I got to a point where I was airbrushing stuff and I started to ask myself the personal question of how far I could take it. I started asking myself, “Who is Sergio Garcia?” Y’know? Am I just reproducing images that I find, or doing more? For some odd reason, I started the tricycle first. People responded, and that’s when I realized I could really communicate a feeling with this type of work.

How does that feel, that big response? Things have always been on the up-and-up with you, but even more-so lately.
The idea of doing a show and being on-blast can be weird at times. Sometimes I wish I could not be there, y’know? Like, set up the art for the opening and then go. That’s why I like graffiti — because, in graffiti, you can paint and nobody knows who you are. But sometimes I’ll go to art fairs and I’ll see people responding to the art, maybe try to touch a bubble or something, and I’m just hyped that ,out of all these other works, they’re really intrigued about what I’m doing. I’ll have a woman with a hair salon in Georgia, who knows nothing about contemporary art, re-post it and be like, “THIS is art!” I like it more, say, if the people setting up the art fair, putting trash bags in the trashcans and stuff, if they’re super stoked on it and trying to get a photo with the art or something.

How do your “elevated hood classics” or “sneaker-brow” pieces wind-up on these high-brow gallery walls? Where does the current demand come from?
There’s a common thing in my work. I know the “Lean” one is kind-of hip-hop, but I think a lot of my work has to do with the youth, before people get jaded. I’ll jump around – I’ll do a pencil sharpener, a joint, a blunt. And I think what ties it all together now is the youthfulness to it. I like the idea of it not being serious. A lot of times, my collectors can be very serious, but they still want this tripped-out piece in their house, y’know? I mean, I did the blunt and the joint ones and I don’t even smoke that much. I first released them at Scope Miami, and I think then Thinkspace posted about it on Instagram. The next morning, High Times magazine called for an interview. The Hash Museum bought two sets for Barcelona. The main reason I did the blunt and joint pieces was it was right when Colorado made marijuana legal, and some people were against it, but also not. It became, like, “Is it taboo? Can we do it in public? Is this bad?” I just did it out in the open. A dude rolling a blunt. A woman rolling a joint. I did the American eagle tattoo on the man’s arm. I did the woman’s nails and gave her a diamond ring. I wanted people to be like, “Oh, this woman is fancy, but she’s smoking. This dude is a dirty mechanic, but also all-American.” I wanted to ask: “Where are we with this as a society?” I wanted to really say something with it.

Speaking of that demand, a recent piece of yours called “For a Minute I Thought the Wall Was Leaning” has been receiving a lot of attention. It originally showed at Art Basel Miami, but has now since made an appearance at Future’s pop-up shop in L.A. How did that come about?
The story of the “Lean” hands is a long one. The first one actually got destroyed…

Whoa, whoa, whoa, Back it up. Destroyed? As in, you created one, it went to its curator or was published, and it was destroyed and you created another one?
I made it for a guy that wanted me to do it as a commission piece. He had second thoughts and he wound up giving it to a close friend to destroy. I forgave him the second he told me about it. The main reason why I did the piece was because I wanted to tap into a culture that doesn’t really get exposed to contemporary work that much. It kind of was a big deal to me, and I’m always still kind of hesitant at times, because people have died on it, y’know? Yet, when I did Art Basel, Paul Wall sent me a message and was like, “Yo, I really dig what you’re doing,” and just that was a really big solidification from the Houston scene. I did the piece to document the Houston rap scene and a culture that I don’t know a lot about. For the first set, to get the bracelet right, to get the bottle right, I called upon my original curator. We had to get the jewelry right, the pinky right, everything. Even when I did the Future pop-up, my buddies got me an empty bottle of Actavis to reference. I knew about codeine, I knew it was a pint, but I didn’t know about it that deep. I wanted it to be legit. I’m hyped that people like it.

Let’s talk about the hands themselves. They’re insanely realistic. Are they mass-produced? Where do you get your hand models?
All the “Lean” hands are different. I don’t recast the hands, they’re all unique. The one I had at Basel was throwing up a Houston “H.” It’s an ongoing series. As for models, I use mostly friends, family. A lot of times it’s my hands! A lot of times it’s my nephew, Jaden. He’s the easiest. I’ll offer him money for his book fair or something, and he’s excited to help.

‘We Shall Not Wilt’ part of the @urbannationberlin Permanent Collection. Thanks @thinkspace_art Inspiration for the piece: “The cry of ‘Flower Power’ echoes through the land. We shall not wilt. Let a thousand flowers bloom.” – Abbie Hoffman, Workshop in Nonviolence, May 1967 #urbannationberlin #sergiogarcia #sculpture #3d #thinkspacefamily #arts #art #berlin #peace

So what’s happening now?
I released a piece for 4/20. It’s crazy. This one is wild. I used a lot of my airbrushing on this. The joint itself is really just one piece of resin, but you can see the jay looks filled because of my airbrushing. It’s pretty hyper-real. You can see I casted Elisa’s umbrella, part of a pool noodle and I wrapped a plastic bag around it to get the texture for the joint. In the future, I aim to do more full-body work, still focusing on kids.

What’s the 4/20 release titled? Your titles are usually kind-of long, yet somewhat lacking in “creative” description.
This one is titled “So, this is one of the new joints we got in.” There’s a band I like out of Texas called …And You Will Know Us By the Trail of Dead. I always thought that name was super rad. Sometimes, titles just aren’t there and I’ll just have to go with “Heart Trike” or something like that. But, if it is there, I try to run with it.