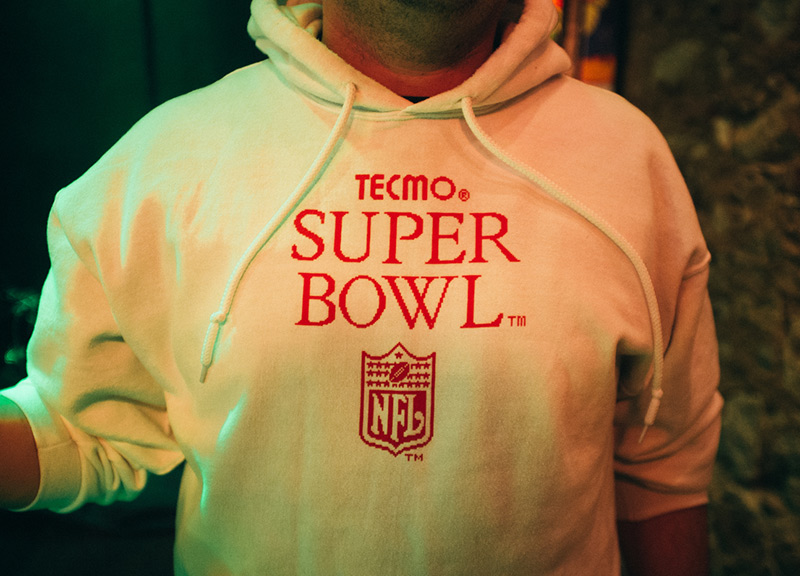 I Got My Ass Kicked In A Tecmo Super Bowl Tournament.

As the nearly three dozen entrants to the first-ever Tecmo Texas tournament began stumbling into Three Links just before 11 a.m. this past Sunday, it was immediately apparent that there were two distinct factions among us.

There was the group debating whether a pre-noon beer or a coffee would best help settle their pre-game nerves and the faction whose steel nerves and steady hands brimmed with confidence. There were those among us that thought they had a legitimate shot at the $250 top prize and others offering up self-deprecating quips about just not embarrassing themselves. Or more telling, there was the group that knew all about the storied reputation of Tampa Bay Buccaneers cornerback Wayne Haddix and his 75 max speed, 75 interception rating, and 69 quickness, and everyone else who remembered — or more likely didn't, because, hey, why would you? — that Haddix happened to have his one and only decent season in 1990 when the Tecmo Super Bowl folks were designing their game.

After spending the past three weeks studying old TSB game guides, watching the NFL Films documentary on the game and its now-annual championship in Madison, Wisconsin, and playing somewhere around 70 or so games on a bootleg NES top-loader that I'd picked up just for this nearly month-long cram session, I figured my skills were somewhere in between these two groups.

When it came time to compete, it turned out, none of my preparation seemed to help much. Playing games against the CPU, which it turns out is worse than even the most novice human opponent, hadn't helped at all. Neither had the fact that I watched so many YouTube videos of accomplished Tecmo Madison competitors facing off against one another.

If I had learned anything in my brief TSB dealings, it was this: The Tecmo Gods are fickle.

I had enough experience with the fluke fumbled kick returns, improbable interceptions, blocked extra points and the like to know that even the most inexperienced Tecmo player stood a chance of winning any given match on any given day.

Nuance, on the other hand, is a nearly impossible thing to pick up over night. Or more accurately: The more I discovered about the game throughout the day, the more I realized I had yet to learn.

Never was this more apparent than just prior to my first game of the day — a matchup between Vinny Testaverde's Buccs and Steve DeBerg's Chiefs, by the way — when I was asked by the overseer of my bracket whether I wanted to customize my playbook before we started play. To mask the fact that I had no idea how to even access the playbook customization screen, I feigned an air of confidence and boldly proclaimed that I didn't need to mess with any of that.

“Who couldn't win with the default playbook?” I quipped with a faux self-assuredness.

The answer, I found out in short order, was anyone who had even the slightest hope of winning this thing.

I wish I could blame my naivete — or the two beers I pounded just before play began — for my first-round loss, but even after giving up an 80-yard touchdown on a fluky, fumbled kickoff, I still managed to squeeze out a pretty competitive match. Well, sort of. At the very least, I didn't completely embarrass myself. And, besides, it could have been a hell of a lot worse. I could have been in the “D” bracket where all the ringers and the Tecmo Madison vets were taking each other on, brought together by random seeding.

As it were, I found myself in the losers portion of the “A” bracket where my company included Three Links co-owner Scott Beggs, tournament co-organizer Chris Derrow and all three members of local punk band The Hormones.

Three beers later and brimming with liquid confidence, I held Begg's Chiefs to all of zero yards passing while leading my own pass-happy Oilers onto victory. Next, I celebrated my win with another beer and a series of one-liners regarding the fact that, while there were over 50 people in the bar, none of them were female.

Synonyms for “sausage party” come easy when spirits are high.

But there was already a lot to be happy about, to be sure. Things were going more smoothly than I think than even the tourney's organizers expected. Case in point? Only one game had been derailed by an equipment malfunction all day, and, even then, the competitor admitted it was his own exuberant ground stomp following a crucial fourth down stop with roughly 50 seconds left in the game that prematurely ended his comeback chances.

Somewhere between that game and my own tournament exit at the hands of Hormones guitarist Geoff Walp — screw you Thurman “perpetually fumbling inside my own 20” Thomas! — talk began sprouting up all over the bar about how cool it would be if there were some sort of monthly or quarterly retro videogame tournaments at the bar.

Even Beggs himself told us that, despite his bar's pretty steady crowd of Sunday regulars, it didn't compare to the enthusiastic lot that hung around downing beers for eight hours or so this past weekend. And, in any case, I'm pretty sure I know at least one local nightlife/culture website that would probably be on board for sponsoring regular Mario Kart-, RBI Baseball-, NBA Jam– or Goldeneye-related events. Just saying.

Anyway, as more and more eliminated competitors began switching their focus from playing to drinking, the crowds gathered around and rooting on the final eight competitors grew somewhat more vocal — though not quite to the extent that we've witnessed in Tecmo Madison clips. That said, if there's something important to be learned from playing in one of these things — even more than how crucial it is to memorize the full bench rosters of every team in the league (even the shitty ones, like Steve Grogan's 1-15 Patriots) — is how to pace one's drinking. Or, rather, I assume that the eight-hour drinking marathon was the biggest reason not everybody seemed to stick around to spectate during the final two matches of the day.

But make no mistake: The finals played out the way they should've. While playing out the tournament's championship on Three Links' stage, Tecmo Madison vet Brent Boudreaux and Internet league competitor Russell Sloan very clearly showed off their intimate knowledge of the game — down to who was the No. 7 receiver on the putrid, 5-11 Arizona Cardinals.

For a brief moment in the championship game's final minutes, though, things did ramp up a bit.

Inexplicably, after a couple of incomplete passes from Sloan's rallying Cardinals, the bar began erupting in chants of “Tupa, Tupa, Tupa” until Sloan relented and subbed the fledgling backup quarterback into the game. I would joke here about how it felt for a few brief moments — like we were transported back to some random sports bar in 1990 — but, even back then, I doubt anybody ever willfully chanted part-time punter Tom Tupa's name so gleefully.

Still, it was kind of fitting that, like his real-life counterpart, Tupa ended Sloan's chances for victory after a desperation throw was picked off in the game's final minutes.

That one will surely eat at Sloan, who had beaten Boudreaux earlier in the day, until Tecmo Texas returns for its next go, whenever that may be. He shrugged it off when the crowd suggested as much to him, but I think he was just playing cool.

As for me? Well, I'm afraid to admit that even with a year's practice under my belt, I probably won't do much better next time.

Not that it'll let that stop me from trying. 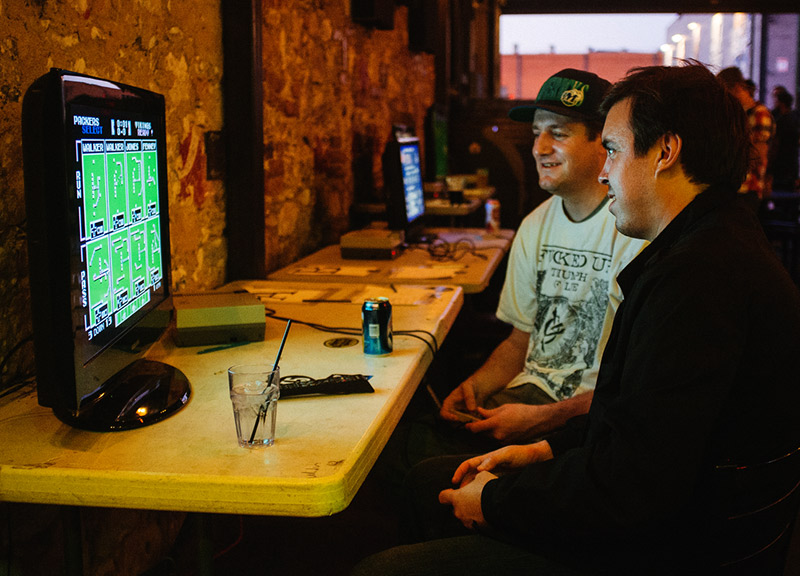 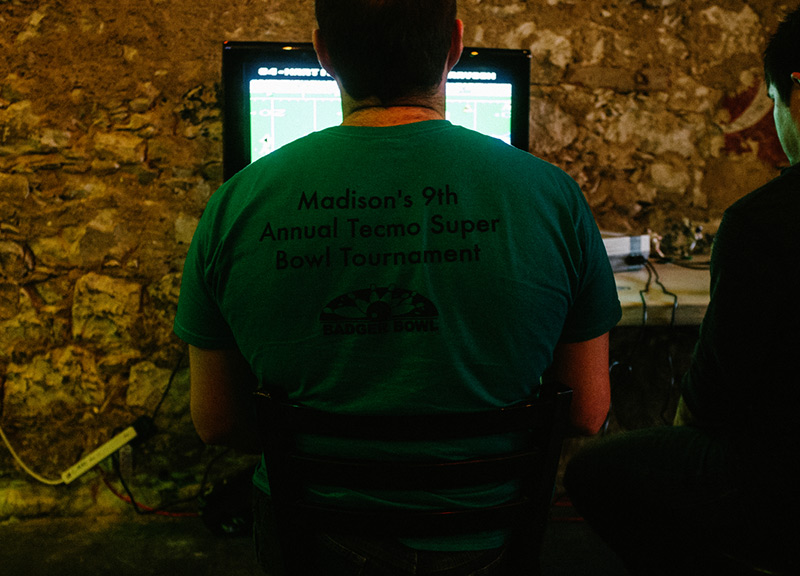 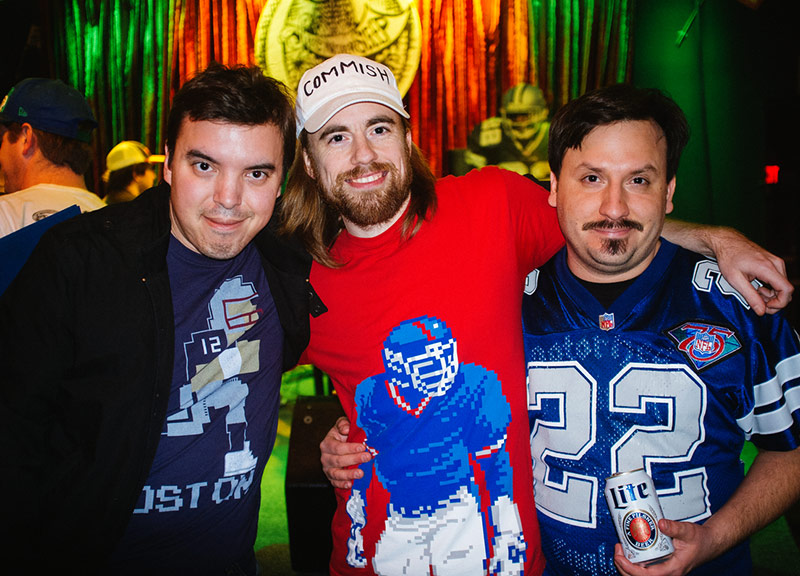 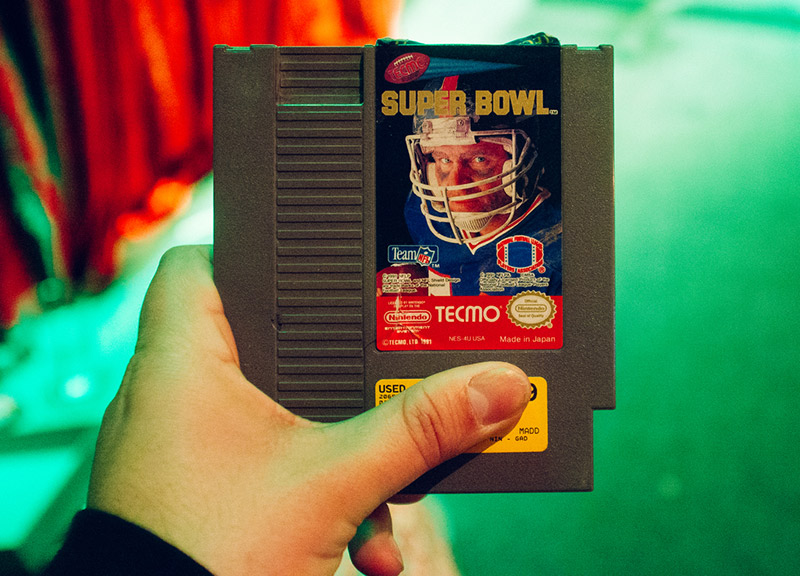 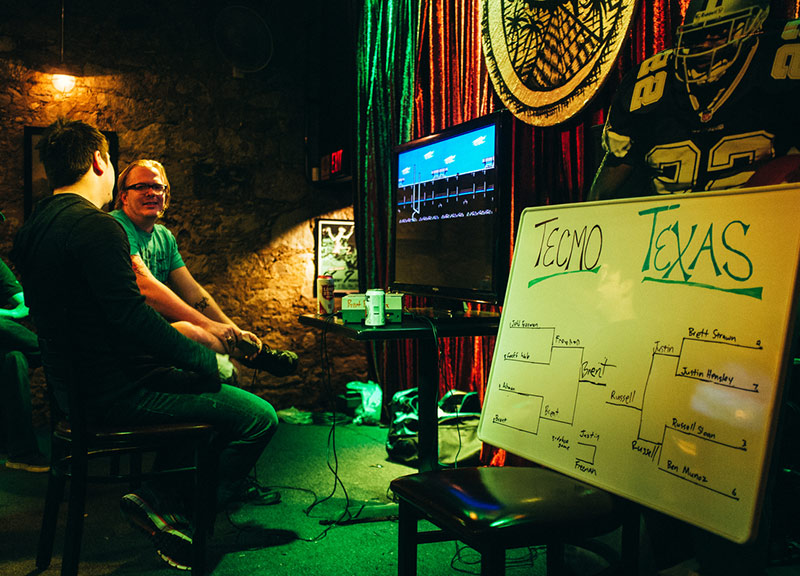 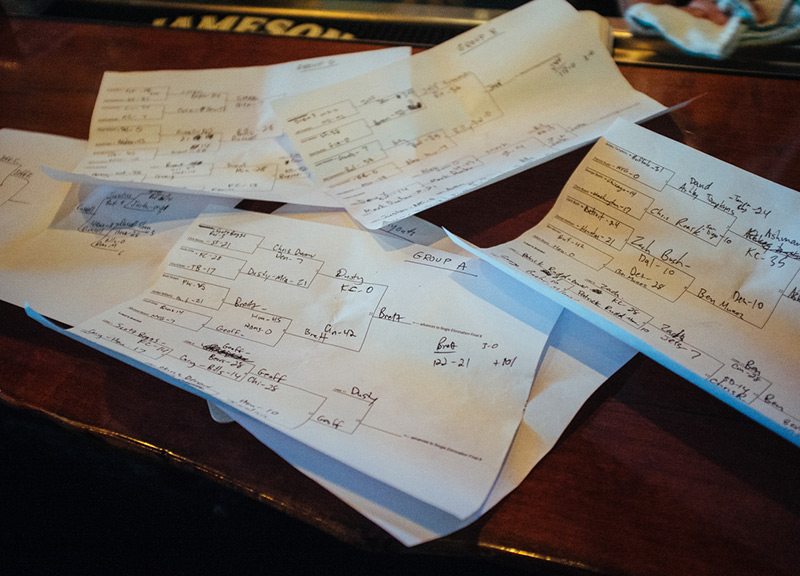 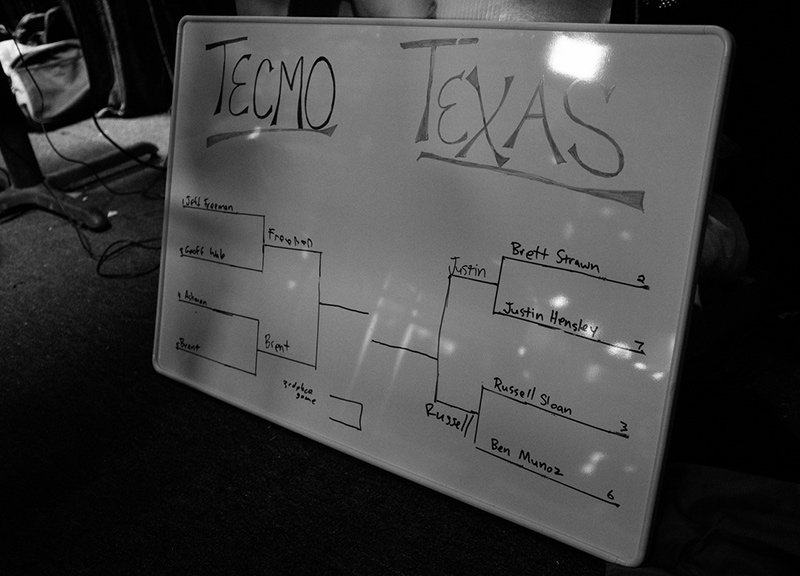 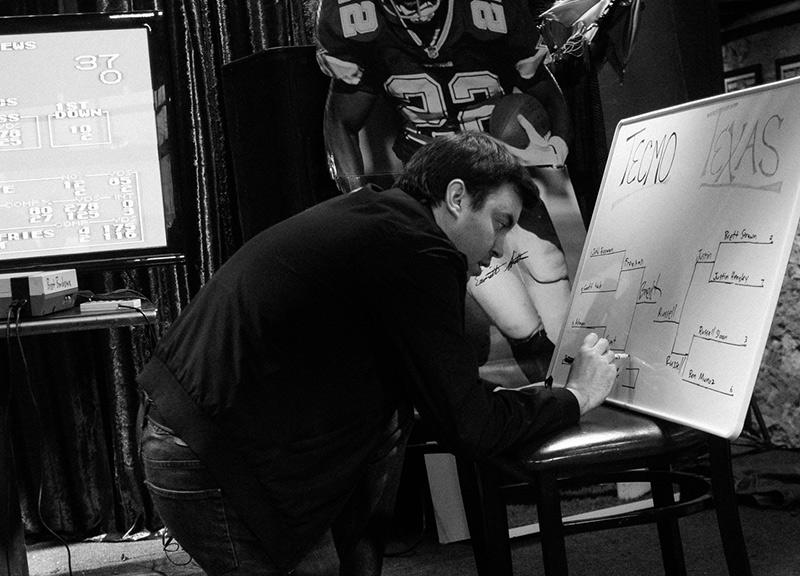 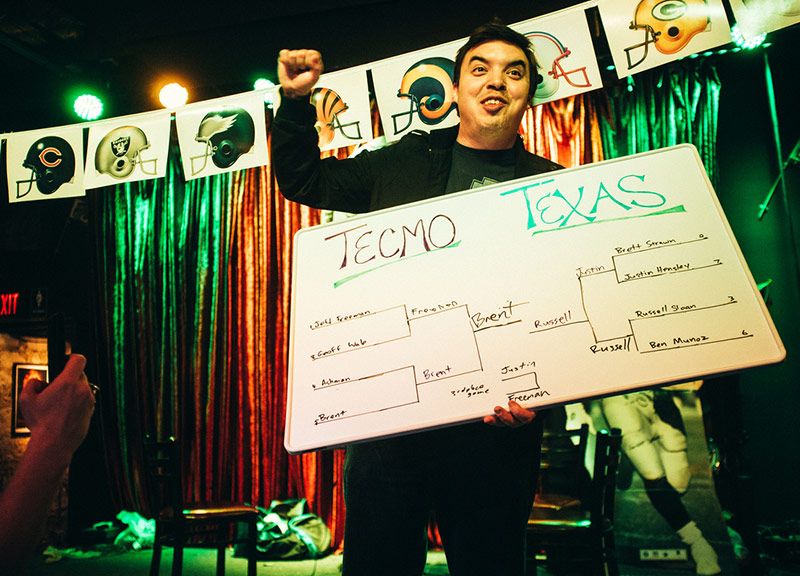 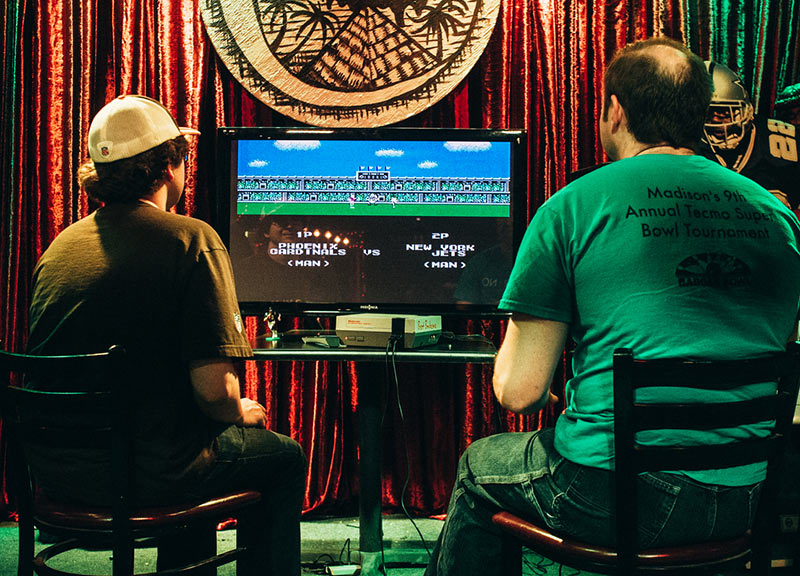 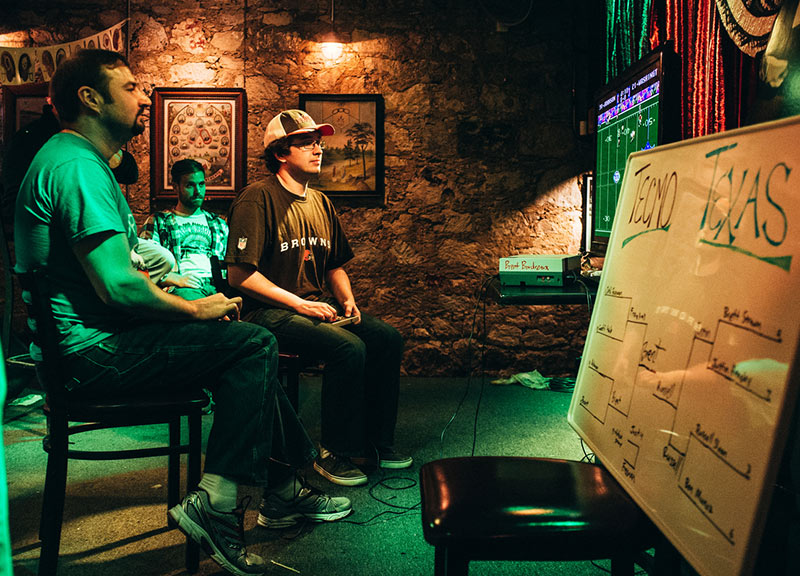 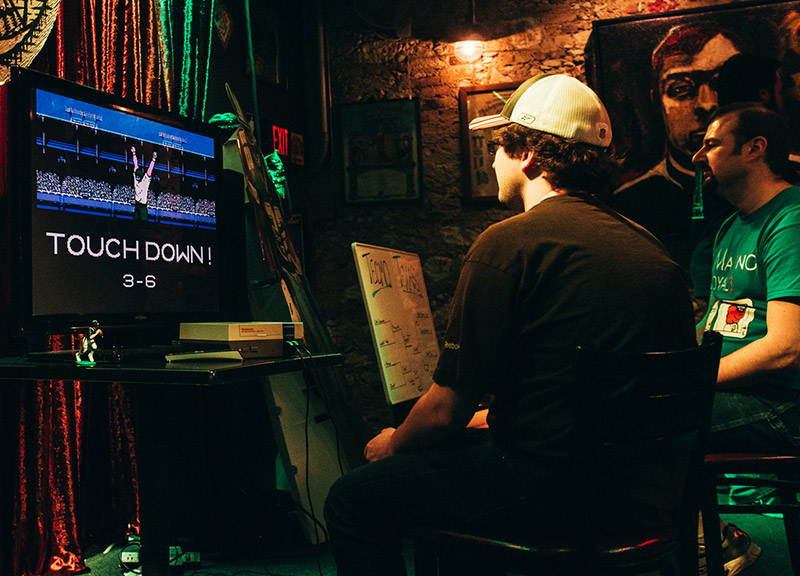 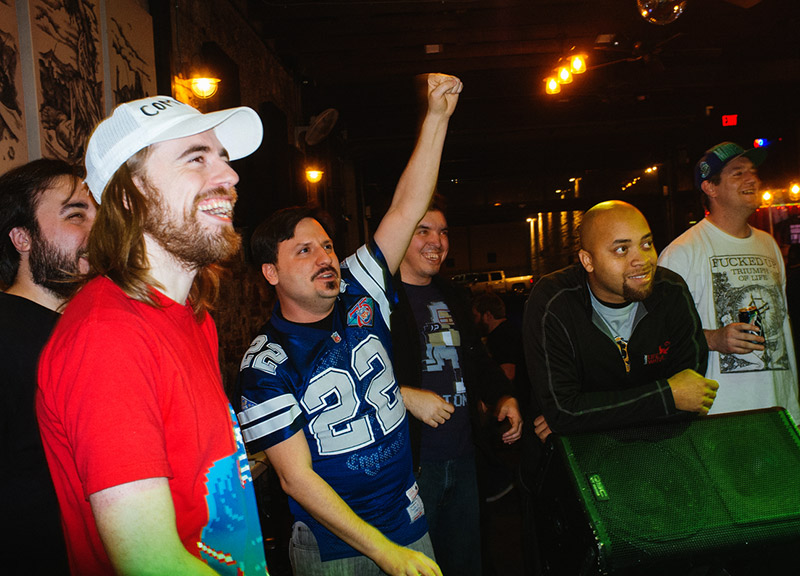 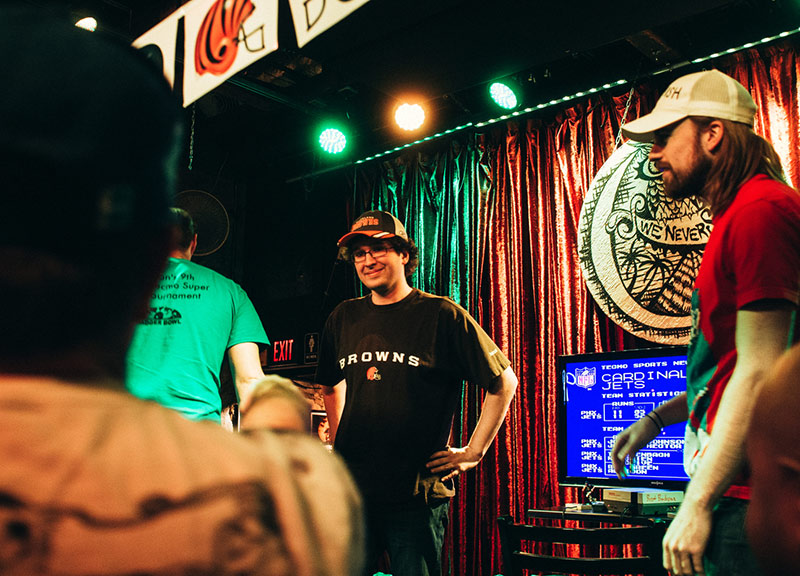 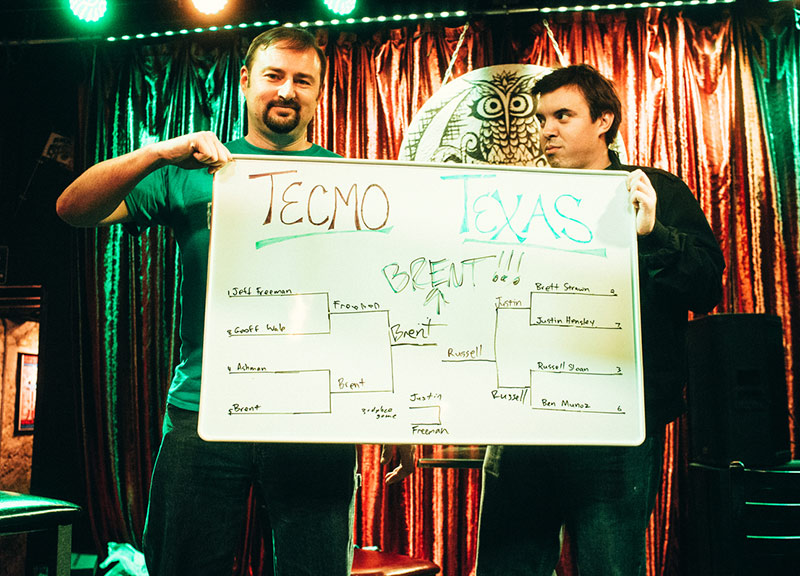