How Effed Are The Mavs? 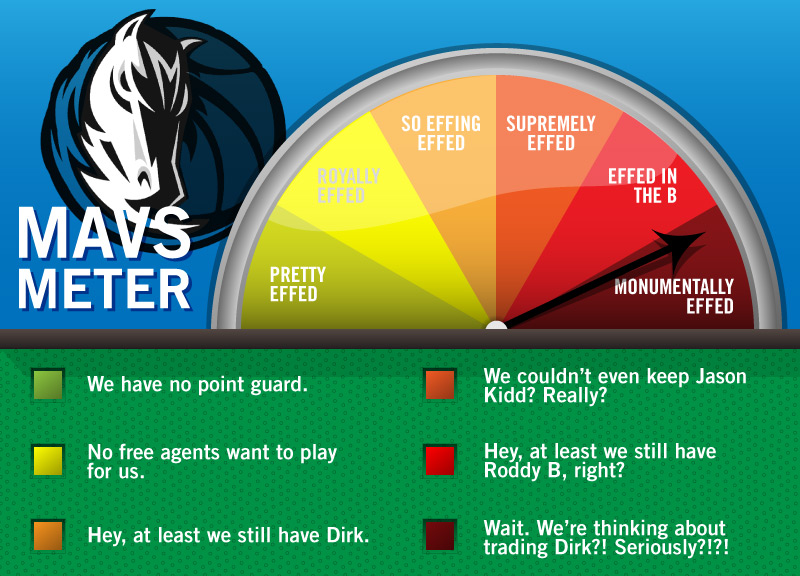 An Illustrated Breakdown Of The Mavericks' Suddenly Dire Situation.

Oh, man. How did this happen?

A little over a year ago, Your Dallas Mavericks were on top of the world, having just recently won the 2011 NBA Championship, their first such title.

Not long thereafter, owner Mark Cuban and general manager Donnie Nelson made the decision to break the band up, allowing starting center Tyson Chandler and starting forward DeShawn Stevenson to leave the team in free agency.

The plan, as the organization put forth to their rabid fan base, was to save up funds for a sure-to-be epic run at greatness during the 2012 free agency period when such big names as Dwight Howard and The Colony's Own Deron Williams would be ripe for the taking.

Only, well, less than a week into the player-signing period, the Mavericks look to be supremely screwed.

Williams re-signed with his current team, the Brooklyn Nets. Howard has made it clear that he wouldn't mind being traded from his Orlando Magic team — but only if it's also to the Nets. Meanwhile, one-time Maverick Steve Nash, a seemingly fail-safe backup plan to Williams, agreed to a sign-and-trade to join up with the Los Angeles Lakers. And Jason Kidd, the Mavericks' surely most guaranteed option, upped and left as well, reportedly agreeing to terms to join the New York Knicks. Even longtime fan favorite Jason Terry has also jumped ship, signing a deal to join the Boston Celtics.

Suddenly, the hometown Mavs are left with a roster that only includes Dirk Nowitzki, Shawn Marion, Brendan Haywood, Rodrigue Beaubois and Dominic Jones as holdovers from the 2011 championship team. Potentially even worse, bit parts from last year's team — Delonte West, Ian Mahinmi, Brian Cardinal and Yi Jianlian — still haven't been resigned by management, and at least two of them (West and Mahinmi) appear likely to draw attention from other teams as well.

There doesn't appear to be a light at the end of the tunnel, either. Now, the Mavs are reportedly going after the long-washed-up Elton Brand. And, as ESPNDallas noted earlier this week, Nowitzki went on record last year as saying he wasn't sure he wanted to be a part of a rebuilding Mavs team.

In other words, the Mavericks are effed. But just how effed? We made a handy graphic to help determine that much.