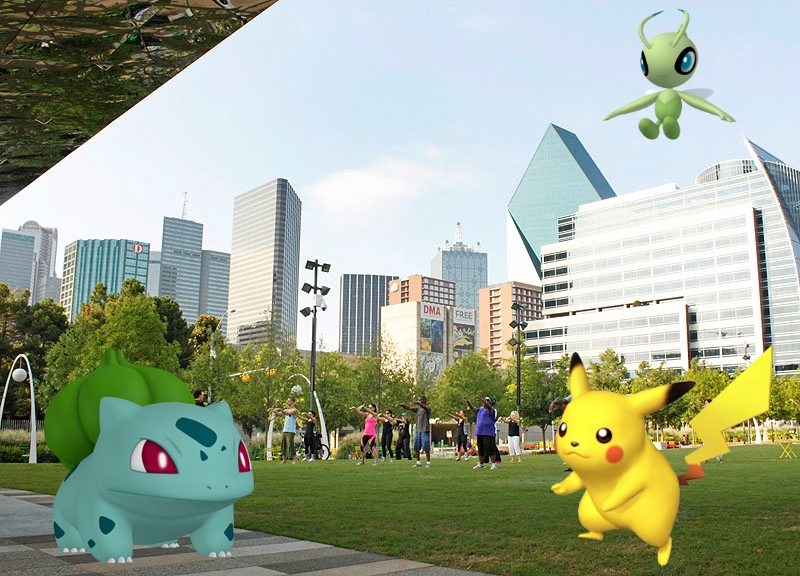 If you’re anything like me (read: a ’90s kid with a smart phone), you’ve probably spent the past weekend combing the neighborhoods of Dallas, hunting for rare Pokémon.

The recent release of Pokémon Go, the franchise’s first foray into augmented reality, is taking the world by storm, and whether you’re a diehard Pokémon Master or you’re just getting started, we figured it would be useful to share some tips and tricks to becoming Dallas’ top Pokémon trainer.

After all, you teaching me and me teaching you — it’s right there in the Pokémon theme song.

Plan Your Hunt. Before you set out on your Pokémon adventure, be sure to plan out where you want to go. If you are looking for items such as Pokéballs, potions and revives, then head to an area with many notable landmarks (read: Deep Ellum, the Dallas Arts District, basically anywhere Downtown). These areas are chock full of Pokéstops, which can be spun to collect items. Pokéstops refresh every five minutes, so if you head to Deep Ellum, you can grab a drink while farming some items. If you’re looking for rare Pokémon, head over to your nearest neighborhood or public park. Walking is recommended, but if you’re impatient or just lazy, grab a buddy and take a drive through neighborhoods to maximize your hunting potential. (Note: Don’t hunt and drive! Whoever is riding shotgun now has a new responsibility beyond navigation.)

Catch Multiples. If you’ve played for more than an hour, I’m sure you’ve already caught well over your limit of common Pokémon such as Rattata and Pidgey. Although you might tire of catching the same Pokémon over and over, catching multiples of common Pokémon actually grants you stardust and candy, which allow you to power up and eventually evolve your Pokémon. You can even transfer the excess Pokémon to Professor Willow to gain some extra candy. Catching multiple Eevees, for example, will allow you to evolve into one of the game’s top Pokémon — Vaporeon, Jolteon or Flareon.

Track Your Prey. There’s a lot they don’t tell you in Pokémon Go. When out and about, keep an eye on the bottom right corner of your screen, and you will see a “Nearby” tab that shows you all the Pokémon close to you. Below these Pokémon, you will see one to three footprints. This tells you how far away these Pokémon are to you — the closer you get to one of your targets, the fewer footprints it will have beneath it. While out adventuring, keep an eye on these footprints and watch for elusive Pokémon to get closer and closer. If no footprints are shown, the Pokémon will show up in your immediate area within 10 seconds.

Walk Everywhere. Throughout your journey, you’ll probably pick up some eggs. These eggs can be hatched through walking certain distances and can contain some very rare and cool Pokémon. The farther the distance required to hatch it, the rarer the Pokémon. Be sure to click on an egg and select an incubator to start tracking your distance. The app will track your distance walked as long as it is open, so hop on over to the Katy Trail and log some miles to get those eggs hatching. Plus, exercise is much more fun when there’s Pokémon involved. Seems that way today, at least!

Join Forces. If you have reached Level 5, you are now able to choose a team. This team will determine your allegiance for the rest of the game, so choose wisely. Joining the same team as your friends will allow you all to attack a gym at once and take over an area as a group. Once you have chosen a team, you are now ready to take over a gym. Gyms can be found throughout town and will be either blue, yellow or red, depending on what team has current ownership. If you think your Pokémon are up to the test, you can battle them in the gym to win that area for your team.