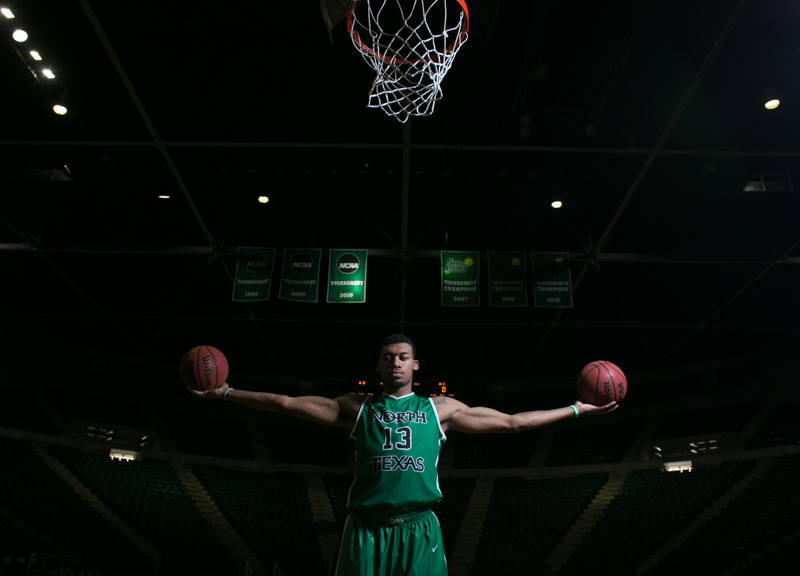 “I'm just happy to be in this position,” the athletically gifted 20-year-old power forward said, anxiously tapping his hands against the table he sat at during the press conference in which he announced his decision. “This is my dream.”

The announcement puts an end to Mitchell's unorthodox and well-documented college career. It also comes almost two weeks after North Texas' season-ending — and disappointing — first-round loss in the Sun Belt Conference basketball tournament. The Mitchell-led team finished the season 12-20, a far cry from the high expectations Mitchell and company had for themselves coming into the season — expectations that included a 20-win season, a conference championship and a run in the NCAA tournament.

“You have expectations in anything you do,” Mitchell said yesterday when asked about the season. “I had expectations of being player of the year in certain aspects of the game. But it didn't turn out.”

Mitchell faced a similar decision this time last year after his highly successful freshman campaign came to an end. But the noted J. Cole fan decided to return to UNT to develop his game some more and mature as an individual.

Upon last year's announcement to come back to school, Mitchell received an immense amount of preseason hype from such national publications as CBS, which ranked the 6-foot-8-inch, 235-pound forward as the No. 7 player in the country heading into the season, and Sports Illustrated, which featured the skilled dunker in their college basketball season preview as a player who could potentially put his mid-major school on the map.

But, throughout the season, despite showing the same flashes of elite talent as his freshman year, Mitchell's sophomore efforts didn't live up to expectations. After averaging a double-double as a freshman, Mitchell's numbers dropped in all categories this season, except in minutes played and steals (he averaged all of .1 more swipes per game this season than last). After this sophomore campaign of 13 points, 8.5 rebounds and 2.7 blocks per game, Mitchell's draft stock has dropped in most every mock draft that can be found these days; whereas, heading in this season, he was viewed as a potential lottery pick, most prognosticators now see Mitchell as a mid- to late-first round selection.

Still, just as he was before the season, Mitchell is confident in his ability to overcome the current round of chatter about his game.

“I'm killing everybody — that's my mindset,” Mitchell said yesterday about his current draft stock. “I've played against everybody in the country. I'm just gonna go at their head.”

Said Benford: “He can flourish in the open space that he'll be allowed to play in in the NBA.”