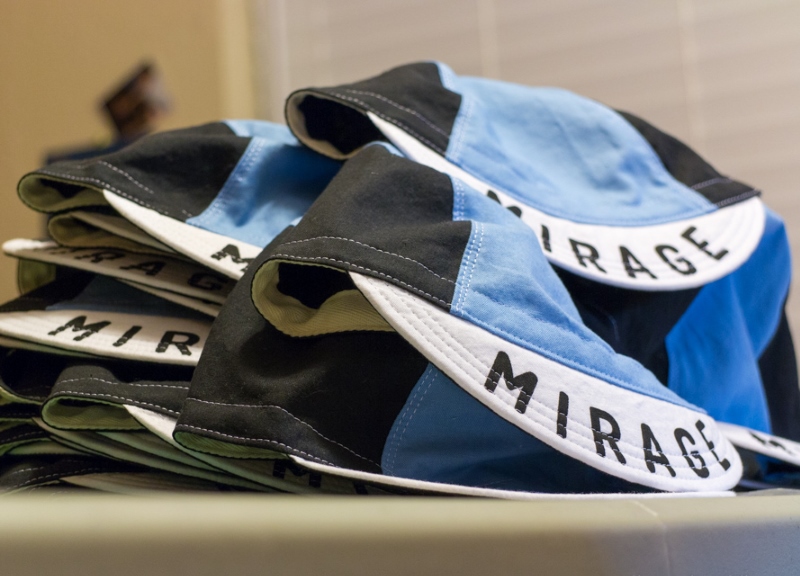 Sure, the Metroplex was just covered in ice, but spring is fast approaching. And for those of us who were unwilling to leave the house no matter how many accessories we had on, this is great news: The weather will soon be nice enough for us to take our bikes out for a spin around White Rock Lake or other Dallas neighborhoods.

But will you be properly geared up? While everyone always mentions the importance of wearing a helmet while riding, people seem to forget the cycling cap as must-have accessory. They help cover your head against the elements: When it's cold, they act as insulators; when it's hot, they keep the sweat out of your face.

And, as it happens, there's a company in Deep Ellum that specializes in making cycling caps. For a year now — March 15 marks the company's anniversary — Jewel Ybarra of Ellum Bag Works has been designing, sewing and shipping her one-of-a-king cycling caps to clients all over the world.

Recently, she was kind of enough to sit down with us and talk about EBW, her own experiences in biking and why she thinks Dallas is more bike-able than Austin.

Let's start at the very beginning: What got you into cycling?
Pretty much in 2013. We just kind of started using our bikes as a fun thing, just going around Dallas and White Rock Lake because we live there. Then it evolved into exploring Dallas, and then falling in love with the city afterwards. Then we stopped using our car completely last year. We just got rid of our car — so we have to ride our bikes. EBW came out of a need for a good cycling cap for the Texas heat. It was unbearable that year.

I remember 2013 being stupid hot. And you were new to Dallas that year?
So, we moved in 2013. It was actually supposed to be just a pit stop. Originally, my husband and I were going to move to Canada to work for a small business, and I was going to be sewing. But I've never sewn, ever. So I was learning how to do that, and then, combined with the fact that we started using our bikes more often, that's how EBW got started and became what it is now.

Wait, so you're new to sewing and you just start making caps? How'd you learn?
I learned sewing on my own. YouTube has been a huge help because it's a teacher in your own home. Then just tinkering and figuring out what works and doesn't work. I mean, I have prototypes that are still going strong. So I must be doing something right.

That's impressive. I've seen some of your designs on your website, and there's some really cool seasonal ones not to mention some that are made out of interesting fabrics like herringbone. From where do you draw your inspiration?
Just really the cycling life. There's not a specific demographic I cater to. I want to make it so everyone can feel like they're the type of cyclist that can wear a cycling cap and not feel weird about it. Like, it can be for the guys that are daily commuters that just get on the bike to go into an office — and I want those designs to be seamless and look like a nice cap. And for the urban kids that like to ride around in the city, the fixed kids, they want to look a little edgy, so I'll have few designs like that, as well as some cool one-of-a-kind fabrics. Like, the cap I'm wearing right now, is a Japanese fabric. It's very exclusive; I have no more of this fabric. I enjoy what I make. I want to be able to get it out there and have people enjoy them.

In terms of availability, I know you have your EBW home page and your Etsy page. But where else could people around Dallas buy your caps if they want to check them out in person?
I have a ton over at Transit Bikes on Lower Greenville. There's some available in Sprockets up in Denton, and there's some at Fulton Cycle Works in California. I also sell some to Nymb.co, which is an online bike accessory store.

And now you have a full range of caps, ranging from lightweight fabrics to even heavier ones like the Polar Vortex for the heavy-duty, weatherproof cap. Are there any upcoming designs you could give us a sneak preview on?
A darted four-panel. It has the pleats like the more classic cycling caps, not like the usual three-panel caps you see now. I've got a three-panel, four-panel and four-panel with dart. Next up, I'm working on a five-panel cap — that's more of a camping cap — sometime in the future. It's put on the back burner for a few months now. Also, for the summer, I'm going to have a wicking cap. It's going to be polyester, with a wicking band for the heat. I'm very excited about that one. Then I have a new fabric called Moleskin, which is very heavy, woven cotton. I like to offer wool alternatives because I'm allergic to wool, so I can't work with wool. I try to offer an alternative that can meet people's need for wool-like materials — and also because I'm vegan.

Hey, me too! So, for the sake of any newbies that might be reading this, could you explain what the different between the three-, four- and five-panel caps means?
That refers to the design of the cap where the number of panels is the different pieces in the cap. The three-panel cap is more of a classic racing style where it's made up of three pieces; a big one and two side pieces ,and it fits more like a dome. The four-panel is just an additional piece, and it fits differently in that it's not as tight around your head as a three-panel. And it has a larger build.

So apart from caps, I know that you have some wallets on your site made from recycled bike tubes. How did you get started doing that? It's a really rad idea.
For a while there, I was just amassing a bunch of bike tubes and I saw piles of trash waiting to be thrown away. Then I got thinking, “What else could I do with this? I don't just want to throw it away.” I figured I could sew it into something useful, and I thought, “What about a wallet?” The material would be really good since it actually repels water. Then, Fran from Transit Bikes started collecting the tubes for me, and I would collect them once a week. I had to stop doing that since I've just amassed 100 pounds of bike tubes that I'm slowly working through. Plus, I liked the idea of doing something biking-related. It's very eco-friendly, and they're really sturdy. I still use my original prototype that I made. It's a little rough around the edges, but it's still holding up.

This prototype is more of a card carrier and the models on your site are bifold wallets. Are you looking to make new types of wallets?
I'm staying with those two for the moment, just because I'm too busy with everything else.

Are you thinking of expanding into making any other accessories?
Nothing at the moment. My big goal is at the end of March finally getting my industrial machine so I can make things of all sorts — backpacks, messenger bags, hip pouches, foot retention straps, the whole nine yards.

Since we're talking about cycling culture, what are your thoughts on how that culture is here in Dallas? Do you connect with the cycling community at large?
There's surprisingly a ton of it. There' a lot of little hot spots of cyclists just wanting to go out and ride together. The Transit Bikes guys moved their Taco Tuesday ride to Sunday because they had so many people. Cycle Deep does their usual Tuesday night rides that should be starting soon. And then there's Bike Friendly Oak Cliff, who are always doing something.

What do you think the city of Dallas could to do make this a more bike-friendly city?
First, they need to give more money to the Bicycle Coalition because all they can do is put up signs and paint and maintain the paint they've already put down. And unfortunately there's not much that can be done because their budget ties their hands behind their back. It's not as good as it can be, but the roads are wide and, more often than not, the drivers are friendly and it's easy to get around.

You mentioned earlier that you've gone car-less for a year now. The Dallas-Fort Worth area is a big place. What has that experience has been like?
It's super easy — mostly because of the public transit system. Thanks to an old injury, I can't ride for too long. So I can just hop on the DART or a bus and then, from there, it's only a few miles to your destination. And with the weather, it's not too difficult. It helps to work from home, but I schedule my days around the weather.

In your explorations around Dallas, are there any specific spots that you like more now? Or something that surprised you that made you appreciate the city more?
Yeah, I was actually surprised how well the neighborhoods connect.

Really? How so?
Coming from Austin, where we lived most of our lives, Dallas is not supposed to be a cycling city. But the neighborhoods are so well-connected because a lot of them are based on a good grid pattern, which makes it a better cycling city than Austin in my opinion. The problem with Austin is that the neighborhoods are very segmented, and they're all separated by highways. Here in Dallas, I can get from South Oak Cliff to the Galleria mall if I wanted.

All photos by Alberto Ybarra. 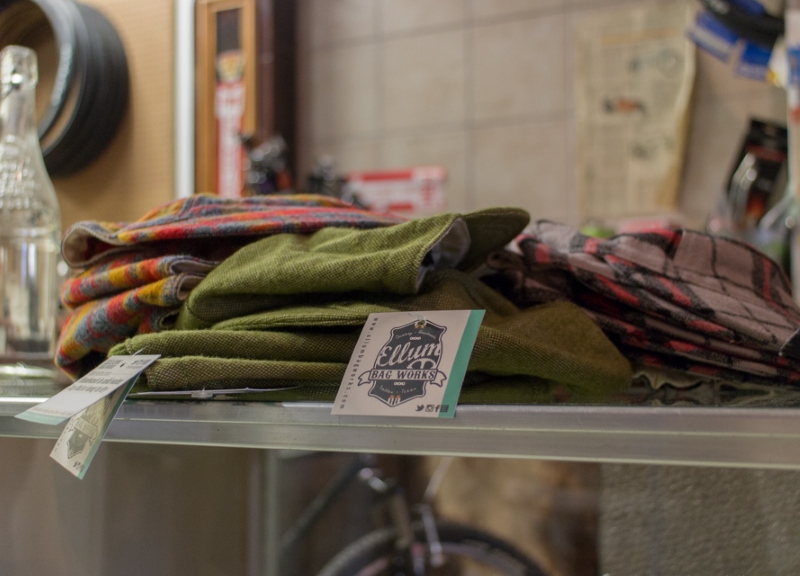 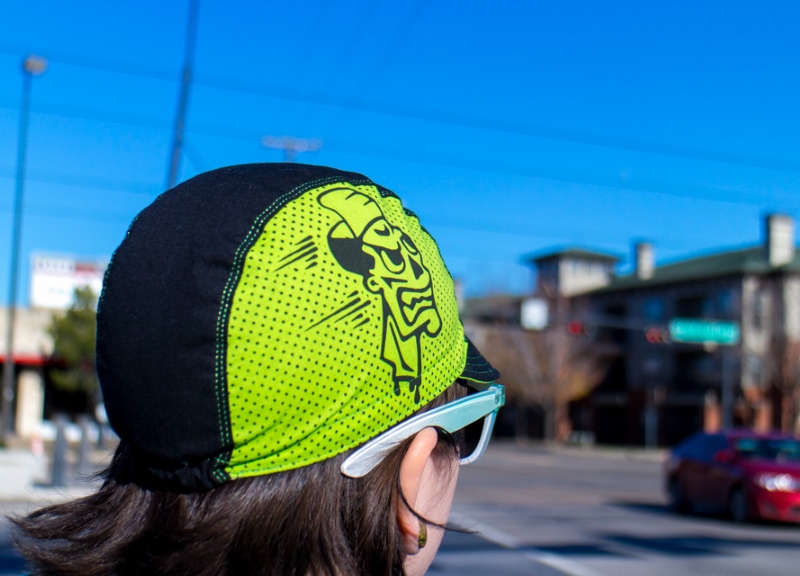 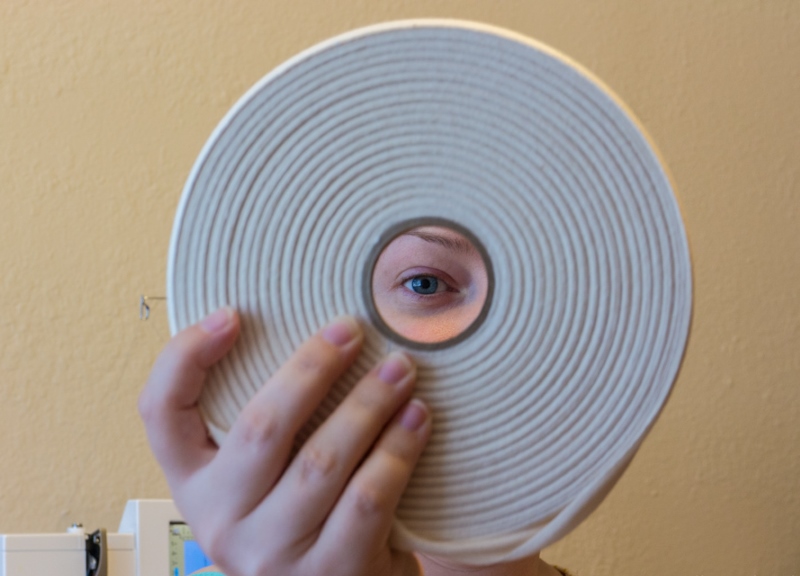 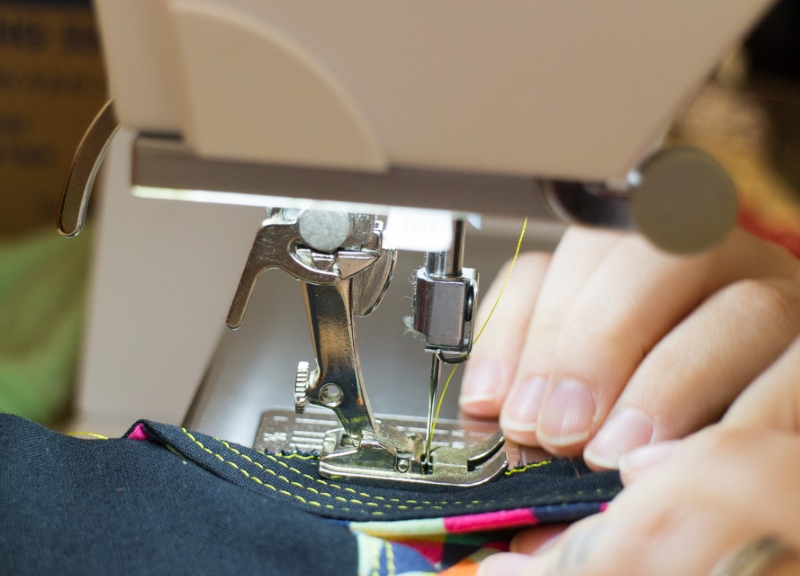 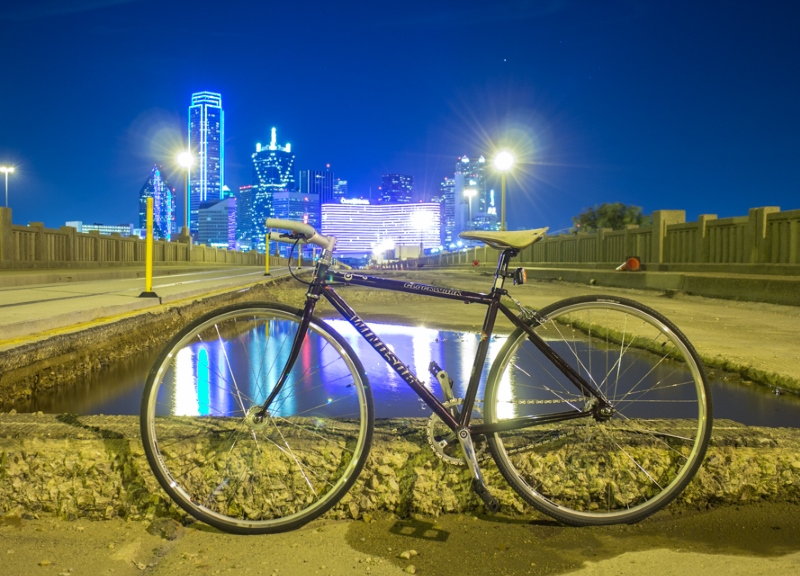 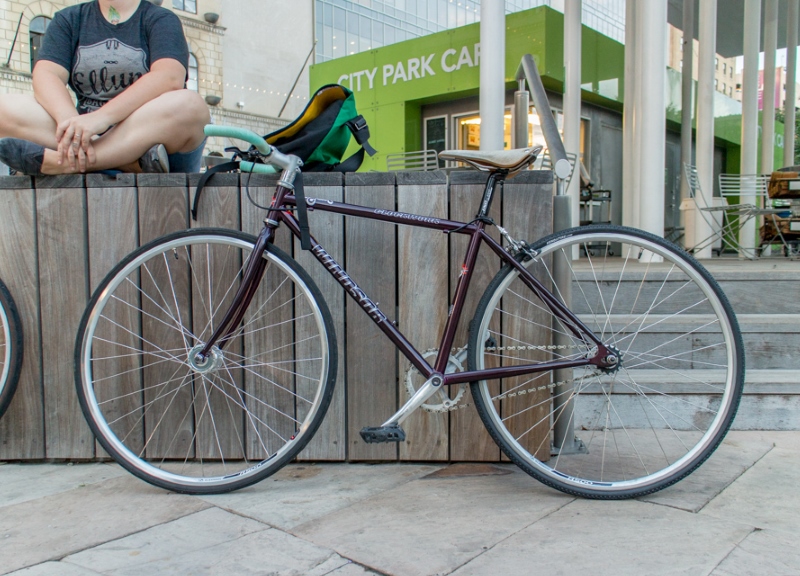 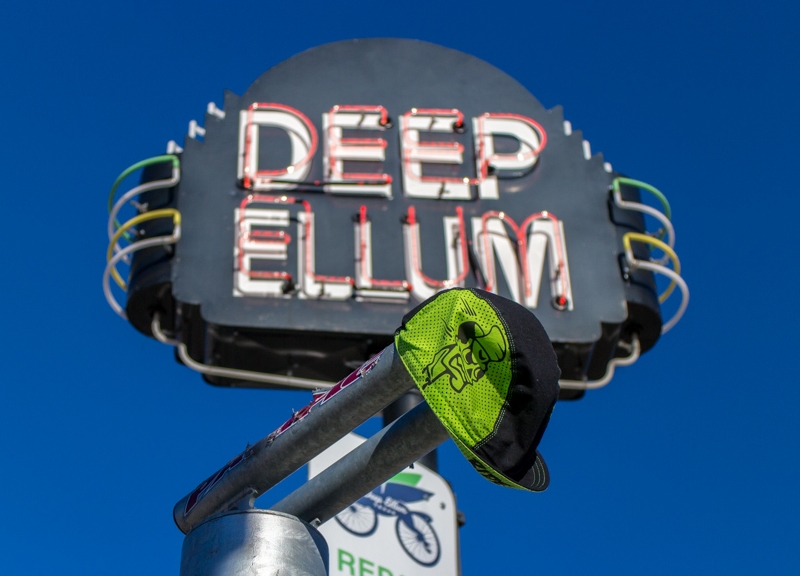 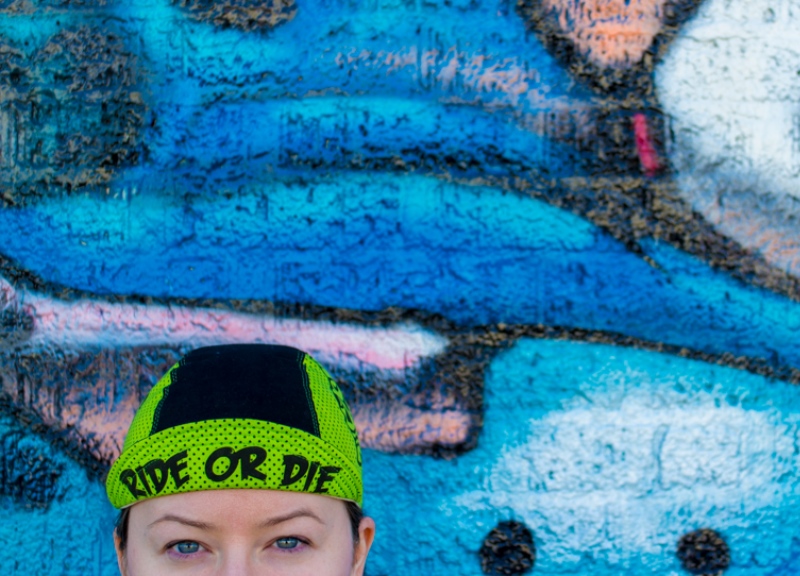 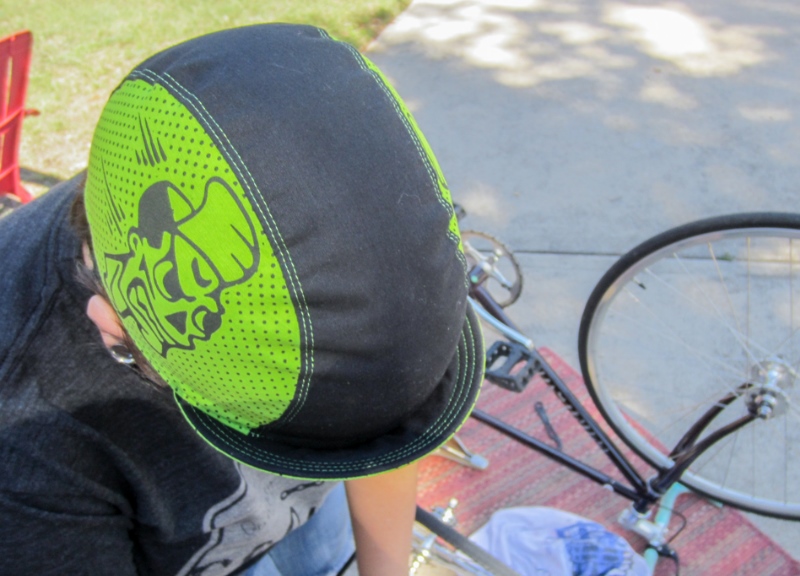 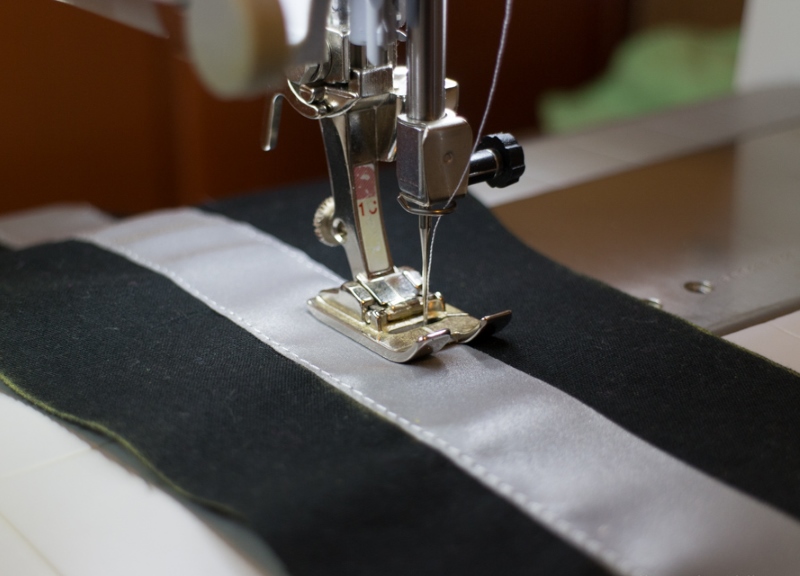 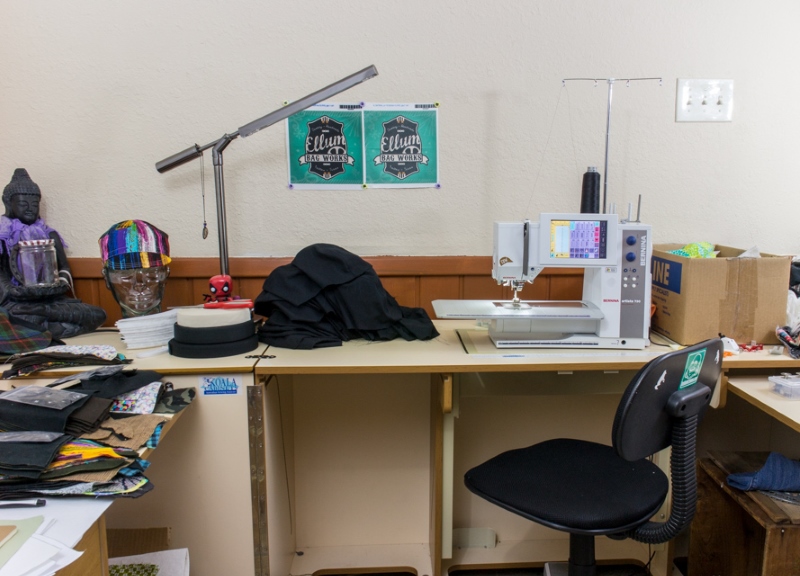