The 10 People You’ll Find At Every Texas University. 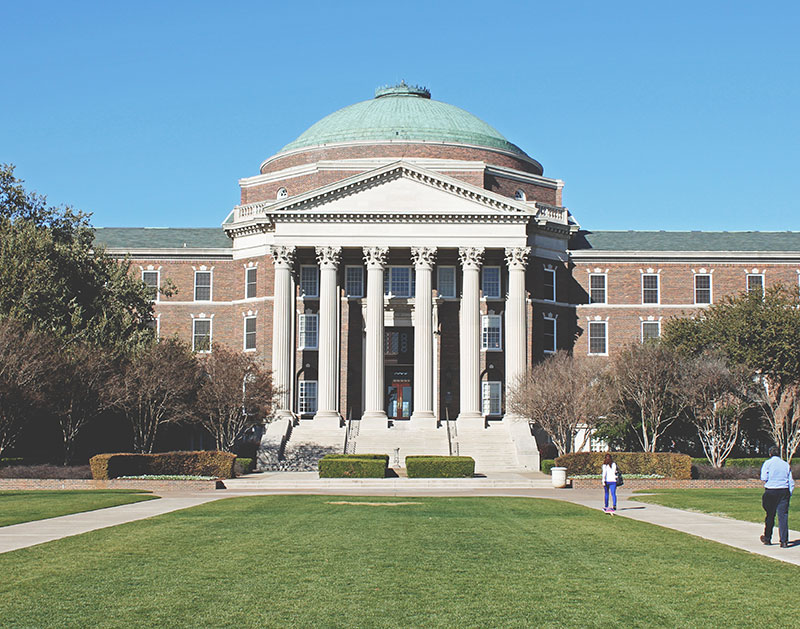 Every Four-Year School In Texas Has Its Share Of These Stereotypical Students. Some Of Them Just Have More Of Them Than Others Is All.

College — if it’s anything like the movies — is a four-year-long sex party extravaganza.

There are some similarities, sure. But, in the end, it’s just a four-year (and sometimes five- or six-year) confusing blur filled with some partying, plenty of all-nighters and a hefty bill called “tuition.”

The best thing about college, and I think we can all agree on this, is that it affords students the chance to meet new people — people they never would’ve interacted with otherwise. On campus, you meet people from different backgrounds, religions, intellectual levels and inebriation levels.

Yes, the students that fill our state’s colleges tend to all fit into a number of different, simplified categories. And, to be sure, some of our colleges in Texas feature more of these stereotypical characters than others.

To that end, we’ve created this guide to the college student stereotypes you’ll find across Texas, and picked a school where you’re most likely to find each of these species.

Just remember: If your current or former higher learning institution in Texas isn’t represented here, it’s only because no one cares about your school. 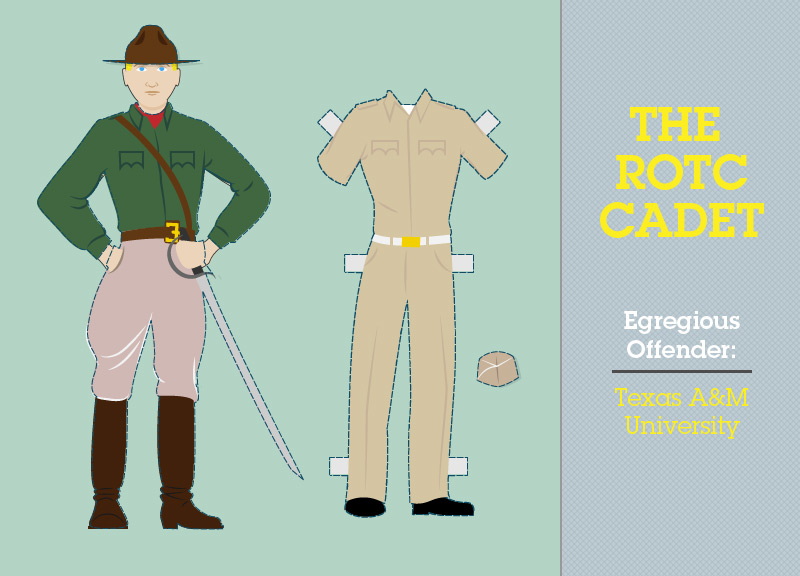 1. The ROTC Cadet.
Egregious Offender: Texas A&M University.
Texas A&M has a chip on its shoulder, largely thanks to the University of Texas. Trust us: You don’t want to say the words “University of Texas” around an Aggie. They’ll promptly “correct” you and point out that the school in Austin is actually “Texas University” because stupid, inaccurate semantics like this actually matter to them and help them sleep at night. But the crown jewel in the A&M stereotype crown jewel isn’t its relentless Longhorn hate. Rather, it’s the school’s massive ROTC program. They’ve got more future soldiers studying here than any non-military academy. That’s not a bad thing, either. The average ROTC Cadet enters college a scrawny little kid and leaves solid as a rock in mind, body, spirit and soul. You may call that “training.” Other of us refer to it as “hazing.” 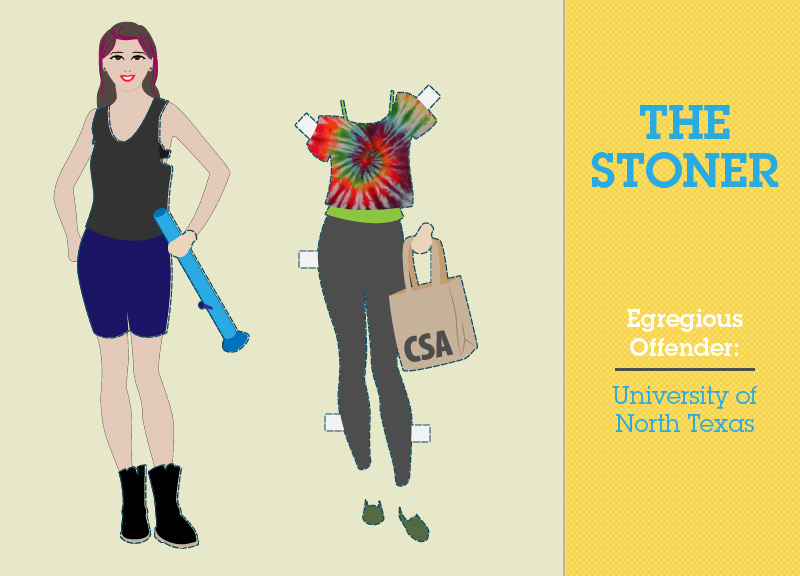 2. The Stoner.
Egregious Offender: University of North Texas.
The University of North Texas refers to its athletics department as “The Mean Green,” which is pretty stupid considering that the school’s mascot is an eagle. The student body doesn’t seem to care much, though. No, not because basically every team in the athletic department is terrible, but mostly because they’re too busy smoking on green to really care. Ever hung out with a Stoner? It can be fun, if you don’t mind lingering in a messy dorm room covered in psychedelic artwork and Jimi Hendrix, Lil Wayne and/or Allman Brothers posters. Beware of these red-eyed creatures when it comes to discussing politics, though. Because they certainly know more than you despite the fact that they’ve never read a newspaper in their life. 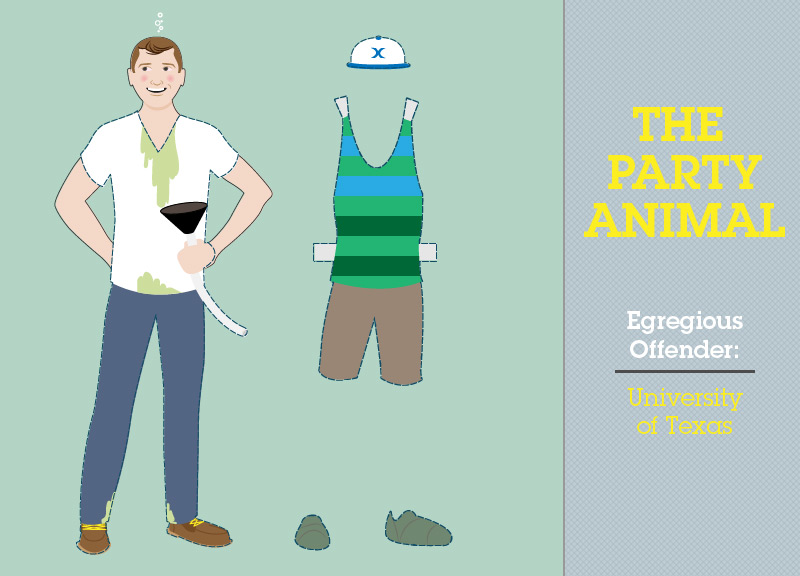 3. The Party Animal.
Egregious Offender: University of Texas.
The University of Texas might be the most diverse college in Texas. It doesn’t matter if you’re in the Panhellenic crew, a hippie, a weirdo, a loner, a conservative, gay, straight, a liberal or whatever. All of the people at UT can come together, join hands and get totally wasted — especially on 6th Street. The Party Animal goes to class hungover on Thursday with stamps and wristbands still on their hands and wrists. Really, dude? Getting wild night on Wednesday? That’s the least active day of the week! Alas, there they are, checking Tumblr, Facebook and Instagram — and basically doing anything except paying attention to the lecture they’re supposed to be hearing. 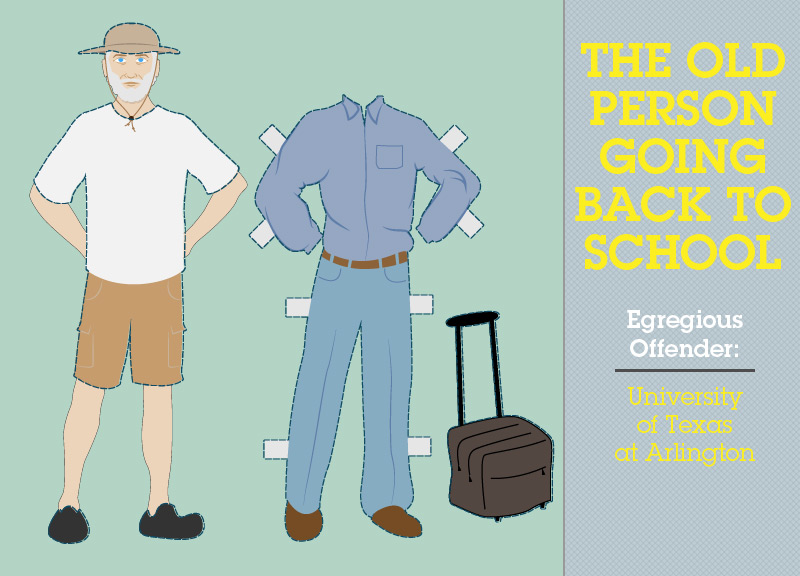 4. The Old Person Going Back To School.
Egregious Offender: University of Texas at Arlington.
The University of Texas at Arlington probably isn’t on a lot of high school seniors’ minds. But for actual seniors of the geriatric set, UTA is the bomb. Yes, out of all of these species listed, it’s the Old Person that’s the easiest to spot. For one thing, they’re old. Plus, they’re always sitting in the front row, coughing and asking the professor to “please repeat that.” You’ve got to respect their knowledge, though. These folks know how to get the very best education their money can buy. That’s because they’re old enough to remember when a gallon of gas cost $1. 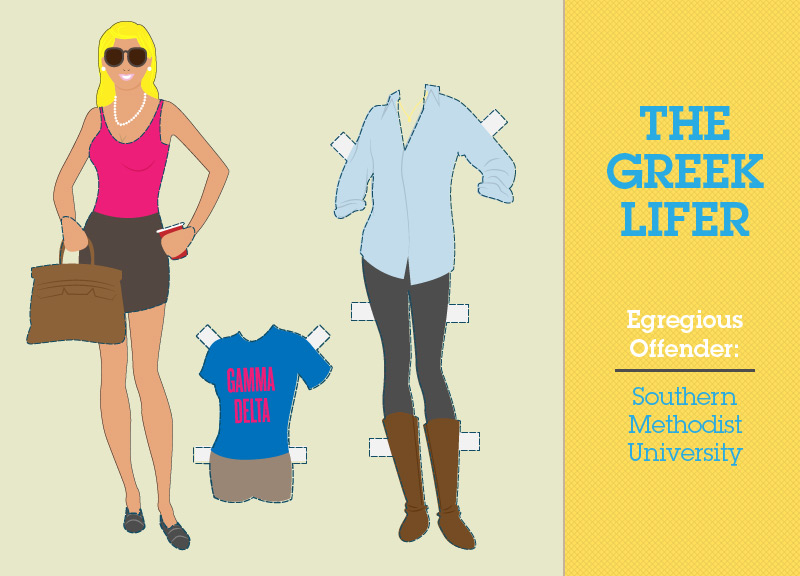 5. The Greek Lifer.
Egregious Offender: Southern Methodist University.
When it’s rush week at SMU, you know. For one thing, it’ll be on the front page of the student newspaper, above the fold, with dominant art. You can’t blame The Daily Campus for this, though. Being in a fraternity or sorority is a bigger deal in University Park than actually being a Southern Methodist. The Greek Lifer can be spotted being OK with a little hazing if it means entry into an exclusive three-word social club. 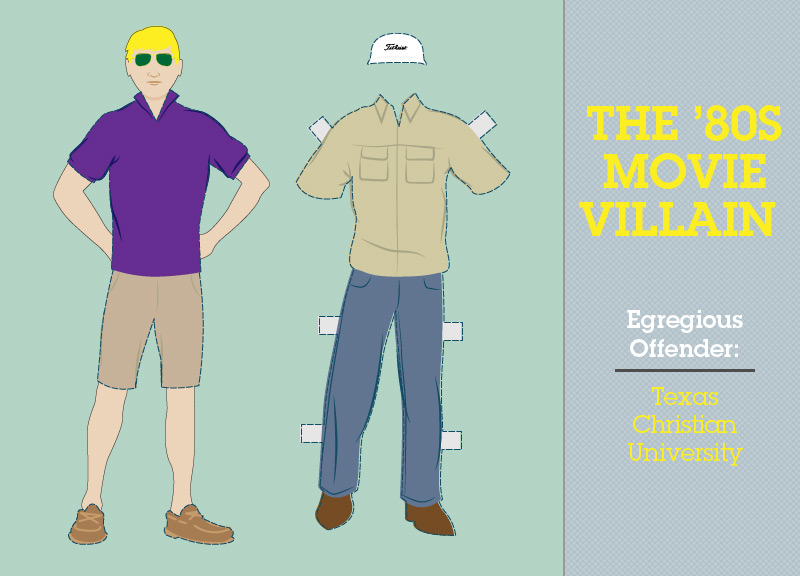 6. The ’80s Movie Villain.
Egregious Offender: Texas Christian University.
TCU is eerily similar to SMU. The main difference? Most of the students at TCU all dress and act like they’re the villain in an ’80s movie. No, not like Alan Rickman in Die Hard. We’re talking James Spader in Pretty in Pink. You know the type: A bright Polo shirts with the collar popped, pleated shorts, croakies attached to their Ray-Bans and Sperry Topsiders on their feet. The ’80s Movie Villain lives to party and turn their nose up at the poor people who hang out far from campus. Don’t fret: When they start to grow fat and bald, their trophy wife will leave them. 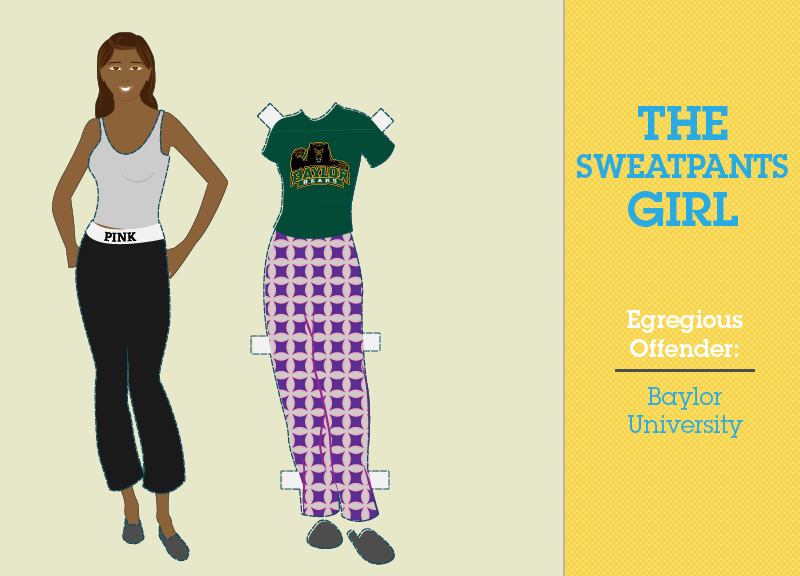 7. The Sweatpants Girl.
Egregious Offender: Baylor University.
You can practically throw all the students that go to a private Christian school in Texas into a huge Venn diagram. They all feature the same cast, really; it’s just that some are better at playing certain characters than others. Along these lines, at Baylor, it’s the Sweatpants Girl that reigns supreme. Sweatpants Girl comes to wears sweatpants (or yoga pants) to class, to the cafeteria, to the gym, to parties and to brunch. Up top, she can be found sporting North Face fleece, with a designer purse tucked beneath her armpits and a clunky case swallowing her smartphone. Don’t be coerced into thinking that she just “threw this outfit on.” This whole look has been carefully calculated. The telling sign? All that caked-on makeup. 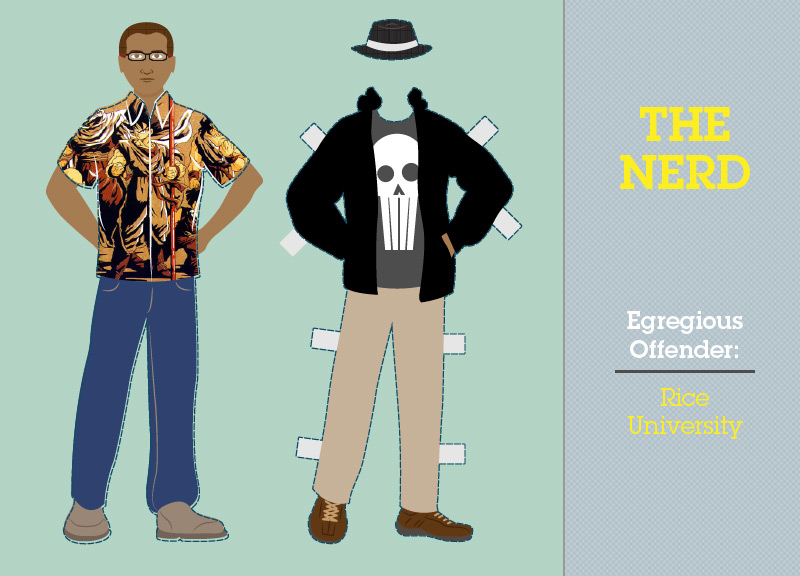 8. The Nerd.
Egregious Offender: Rice University.
Rice is a crazy tough school. That’s why all The Nerds end up here. It’s also why they have naked runs and things like that. Only The Nerd really thinks that shit is funny. Still, you have to respect these guys. They have no shame in their love for Dungeons & Dragons, they’ve already read all the Game of Thrones books and they can quote Adult Swim lines with the best of them. They’re a tough lot to spot when not running naked, though. Your best bet for meeting a nerd like this is to sign onto your Xbox Live account. 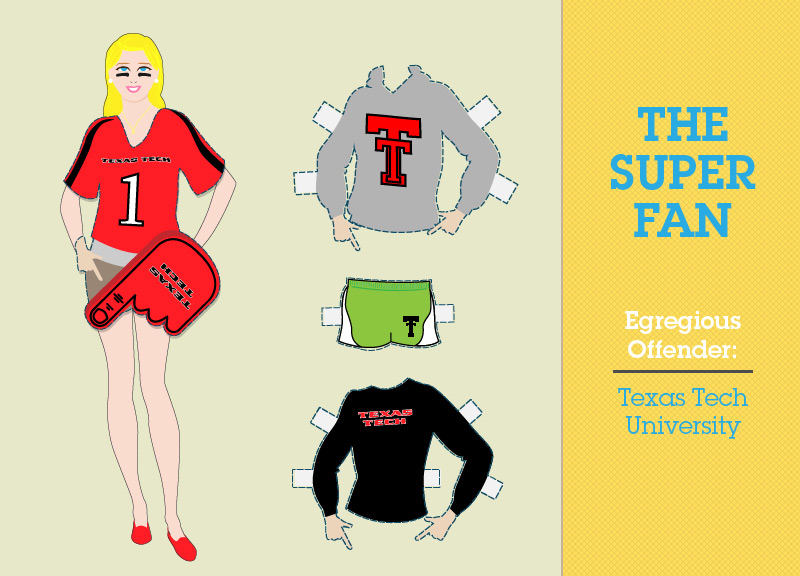 9. The Super Fan.
Egregious Offender: Texas Tech University.
What is there to do in Lubbock? Pretty much nothing. Hence all the love for Raider football. Hey, at least it gives the student body something to do on a Saturday. And, though the Raiders have a mediocre football program (a lowly .563 all-time winning percentage, 11 conference titles and a big fat zero national championships), their fans don’t seem to mind. instead, the Super Fan makes a ritual out of tailgating and acts like an obnoxious idiot at ballgames, getting wasted by kickoff thanks to said tailgating. The Super Fan is easy to spot; they’re the only ones with the guts to wear a team jersey outside of the stadium, and their rooms are decorated in sports-related memorabilia, including, of course, the quintessential team schedule poster. You even tell who they are when they’re on the road. That’s what the school-themed bumper sticker and flag on the window are for. 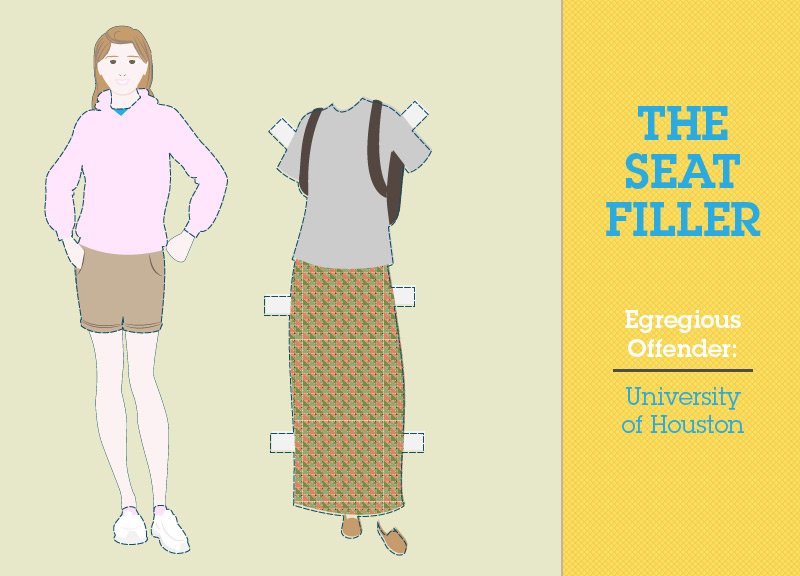 10. The Seat Filler.
Egregious Offender: University of Houston.
Aside from from a creative writing program that is consistently ranked among the best, why would anybody actually enroll at the University of Houston? We’re not sure, really. But we do know who these people are. They’re the Seat Fillers, and, well, they exist at pretty much every school. They’re the ones who blend into the background, the extras on the set to the movie that is your college experience. They make up the crowd. But, really, the Seat Filler is absolutely nothing special. Despite what their mothers tell them.

All illustrations by Jeremy Hughes.