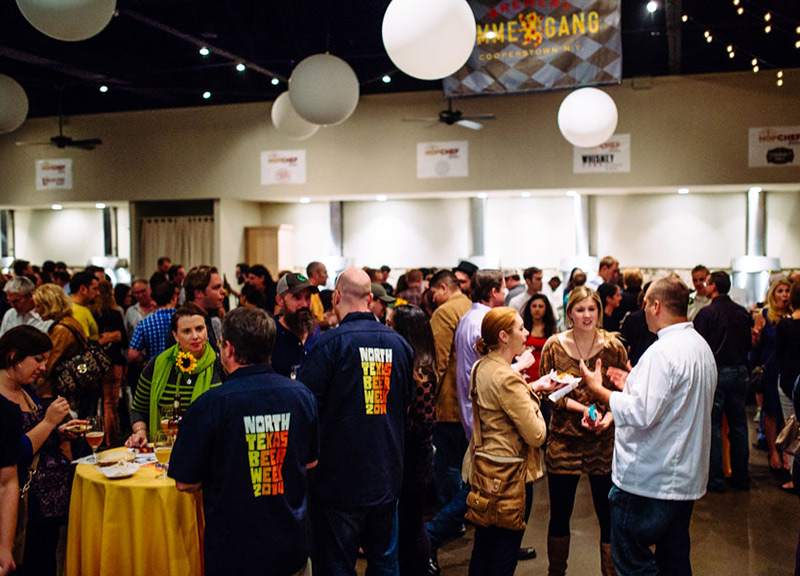 We Got Drunk On Food and Beer Alike At Brewery Ommegang's First Dallas Hop Chef Competition. It

A scintillating array of smells immediately greeted all who entered the event space of 3015 Trinity Groves on Monday evening. Next, these newcomers were handed a glass, some paper and a wooden token. And with those elements came an explanation of sorts — something about voting, although most just skirted on by, skipping that chit-chat and heading right toward the food positioned along the back wall of the venue.

Patience may be a virtue, but at last night's Hop Chef competition, it lost its fight against gluttony. Perhaps this was to be expected: Brought here as part of North Texas Beer Week, this was the Brewery Ommegang's first time hosting its food-and-beer-pairing cook-off in Dallas.

And in boasting a lineup of participating chefs from some of Dallas' most celebrated and “beer-forward” eateries (Irving’s FM Smokehouse, the Design District's Meddlesome Moth, Lower Greenville's Blind Butcher and Libertine Bar, Plano's Whiskey Cake and Uptown's The Common Table), there was indeed reason for excitement about the Cooperstown, New York, brewery's affair. Because, on this night, something a little different was promised: Sure, on any given day, you can enter any of these restaurants and eat a pleasant, filling meal; but, at Hop Chef, you could eat fare from all of these restaurants, assembly-line style, and call it a “meal.”

And it was indeed the competition part of the event, while easily glossed over by attendees, that served as the impetus behind these inventive chefs creating the night's entirely new — and, yes, delicious — dishes. To win, cooks had to create the best food and Ommegang beer pairing. Although, with a beer list seven deep, the real winners were the attendees.

Jumping from table to table, hungry beer-lovers grabbed small serving plates while Ommegang staff cleaned and refilled their glasses with brews of varying opacity and earth-tones. Meanwhile, chefs worked tirelessly against the wall, cooking all manner of meats and veggies, and doing their best to plate them pleasingly.

If you were bold, you could shotgun each food and beer pairing: Finished one dish, take a quick gulp of beer and rush over to your next favorite food. Of course, you'd be drunk and full-to-bursting before you knew it. Also, you might get belligerent and be asked to leave. But, yes, at least they would call you bold.

Truly, though, the conscientious were rewarded. These dishes were best enjoyed slowly, with deliberate bites preceding moderate sips of that hoppy elixir nestled in hand. These pairings, after all, were there to be observed and enjoyed. And those who gave them that respect prospered — while, OK, also getting a bit buzzed.

Unsurprisingly, all the food was solid. Also unsurprisingly, the beers were enjoyable. Ommegang specializes in the malty Belgian style of ales, and the bold hoppiness at play required either a heavy hand or a subtle dash from the cooks.

Some pairings were just awesomely spot on.

Whiskey Cake's Stan Rodrigues in particular created an amazing Asian-style pulled pork bun. The soft, sweet bread was filled with pork that was braised in its beer pairing, the Abbey Ale, for 12 hours. On top of the bun was a Kung Pao glaze that added a subtle, sweet compliment to the darkness of the beer. Man, was it good. The crowd as a whole agreed, too, awarding Whiskey Cake with the People's Choice award.

Other pairings felt a bit ham-fisted.

FM Smokehouse's Smoked Texas Quail tacos topped with lemongrass pico de gallo were fairly solid. The corn and flour tortillas used gave the dish shape with the flavor of the corn. And, to be sure, the pico boasted hints of the beer with which it was paired, the Hennepin Saison. But after a first subdued bite of the taco, the sip of the Hennepin that followed fought against the taste buds: The citrus flavor lent by an orange peel and the odd introduction of ginger contrasted the taco and ultimately left the two in conflict. Perhaps an incorporation of ginger into the taco could have helped to meld the two? Perhaps.

Still, none of the other competitors on hand — at least not in the minds of the event's actual judges — matched the efforts of Oliver Sitrin and his Blind Butcher staff. Their jalapeno, bacon and cheddar bratwurst with sauerkraut and mustard was good, sure.

But what really stood out about this dish was its presentation. Sitrin harangued all to smell a hop-filled bag he kept by his station — the same hops used in the beer he'd been tasked with pairing, the Hop House pale ale. It was a goofy ploy, but it worked, selling the judges on the fact that there actually was something to this pairings' thought process. Also, it didn't hurt that Sitrin's demeanor elicited more than a few laughs.

On the whole, Dallas' first Hop Chef affair was pretty awesome, you guys. If you balked at the $60 cover charge, well, that's your loss, as the amount of food and beer served in return more than made up for that rate.

So, too, did the laughs. 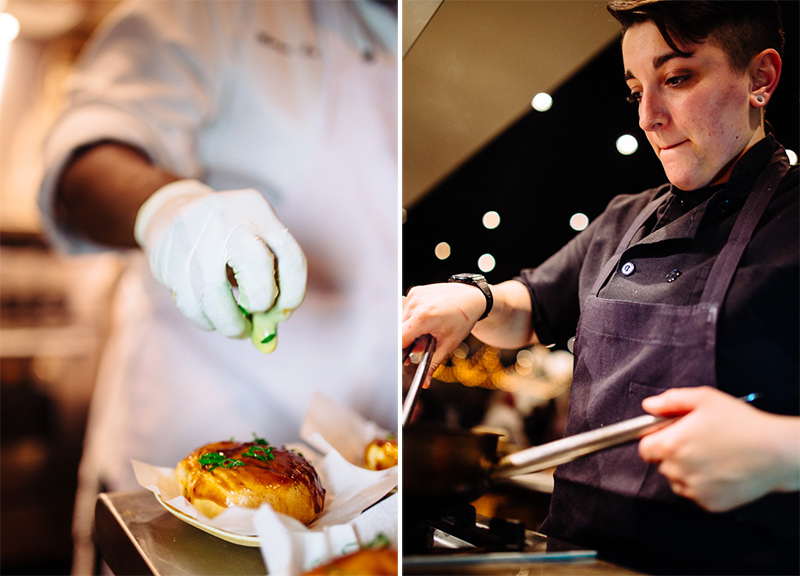 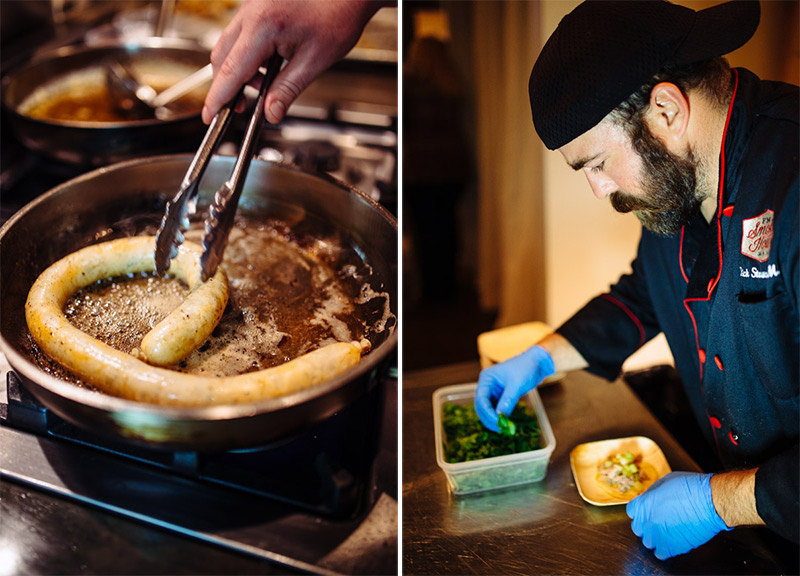 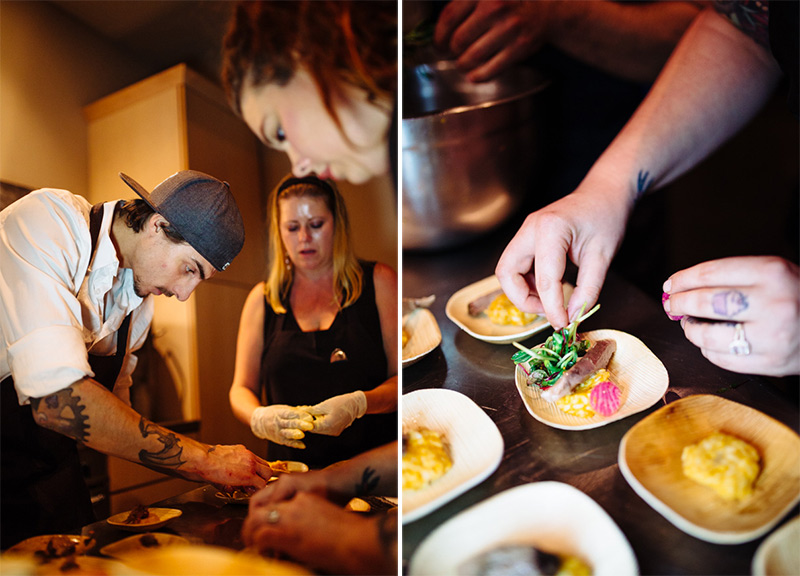 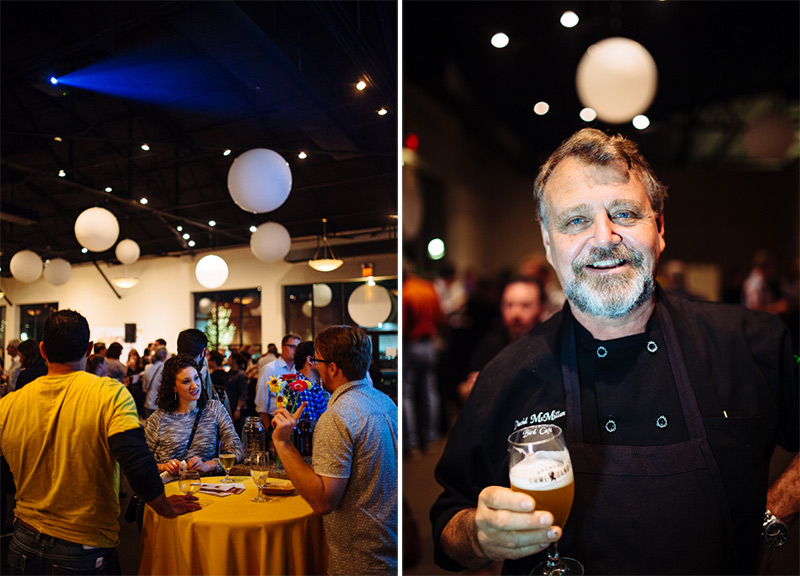 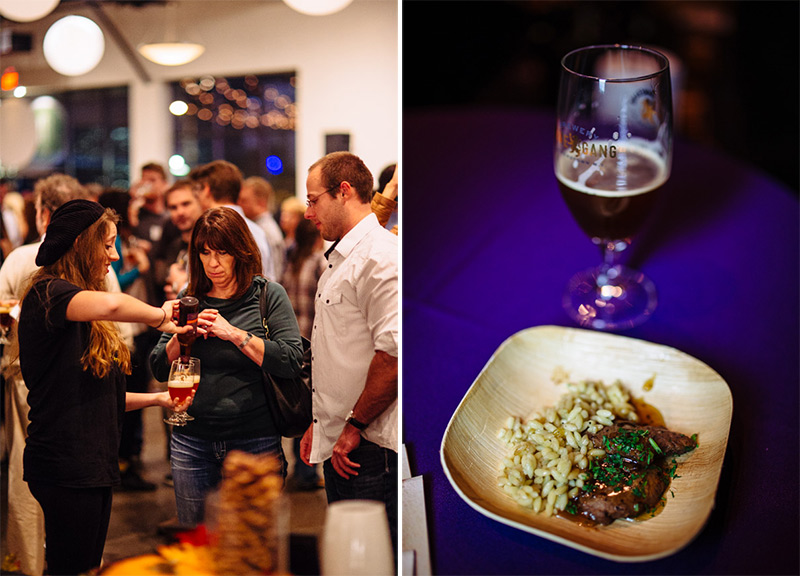 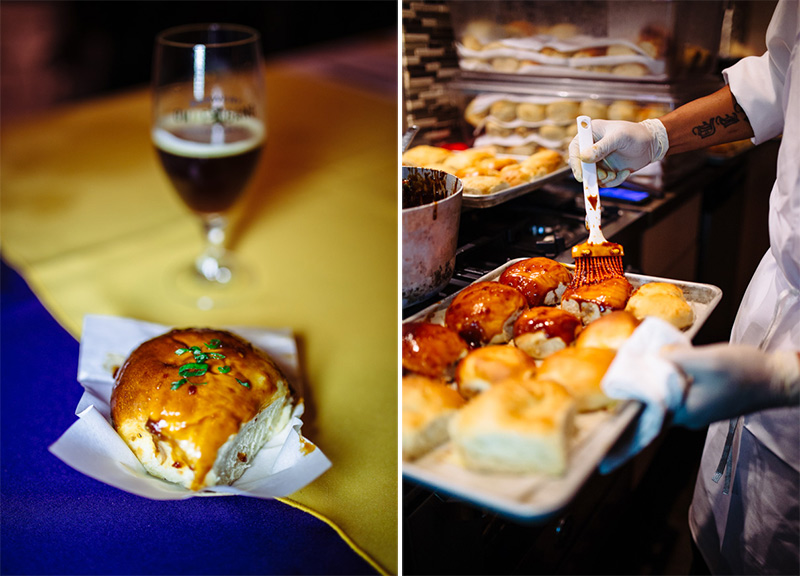 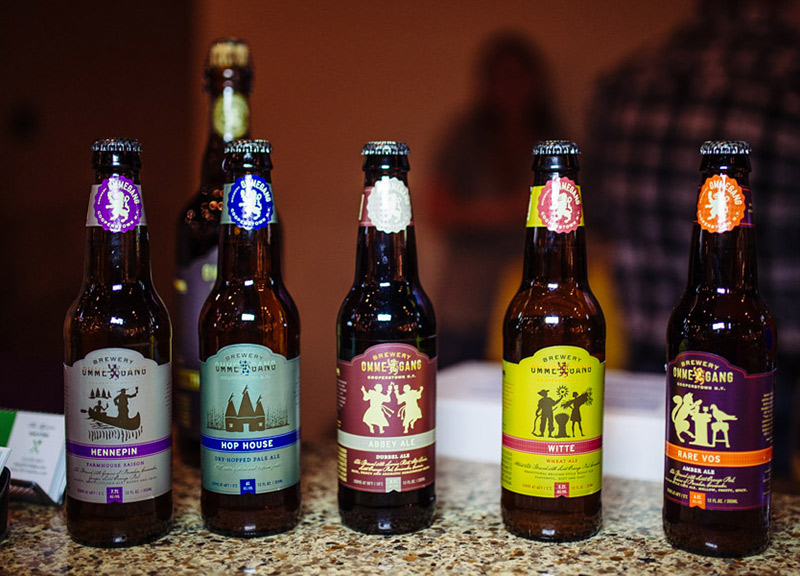 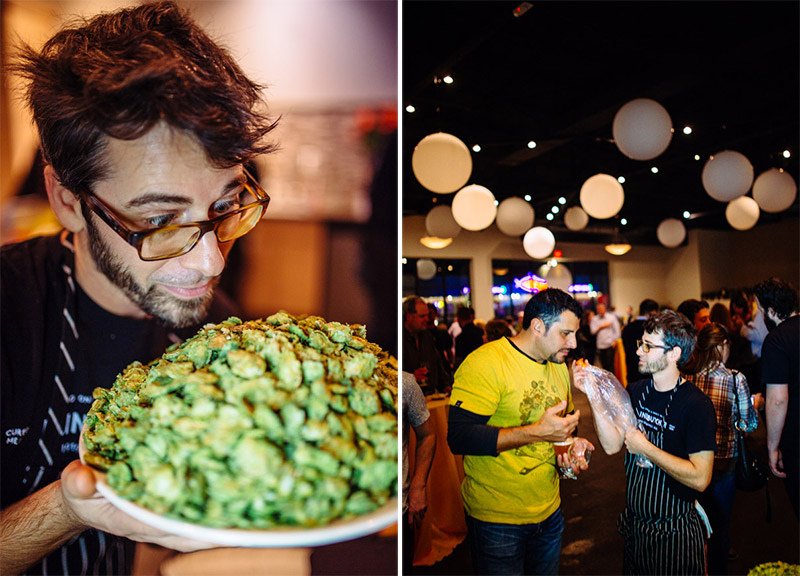 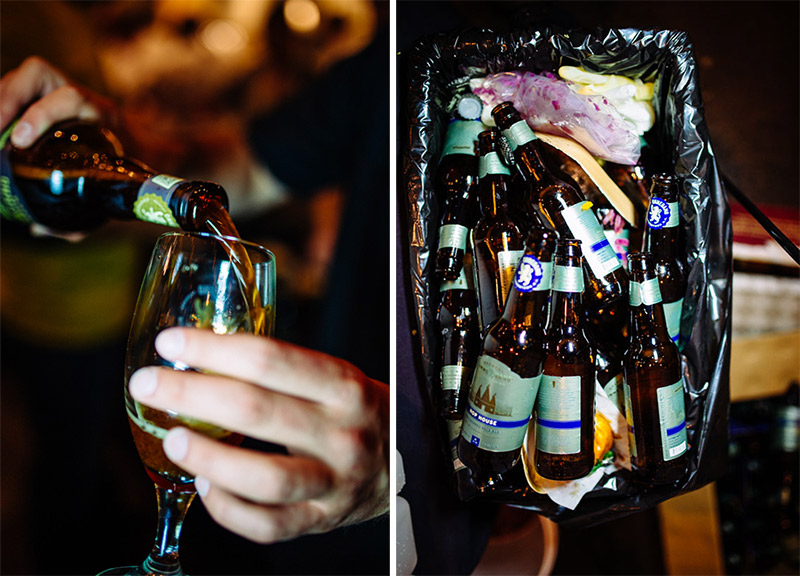 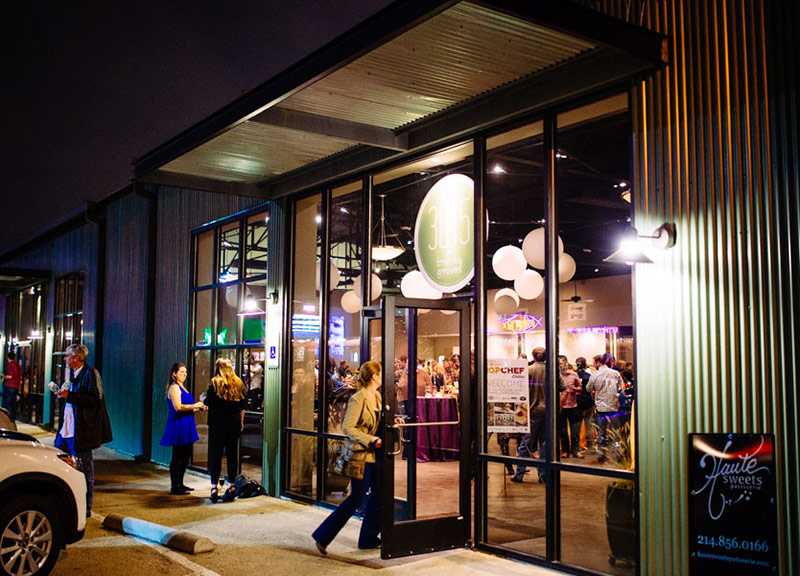 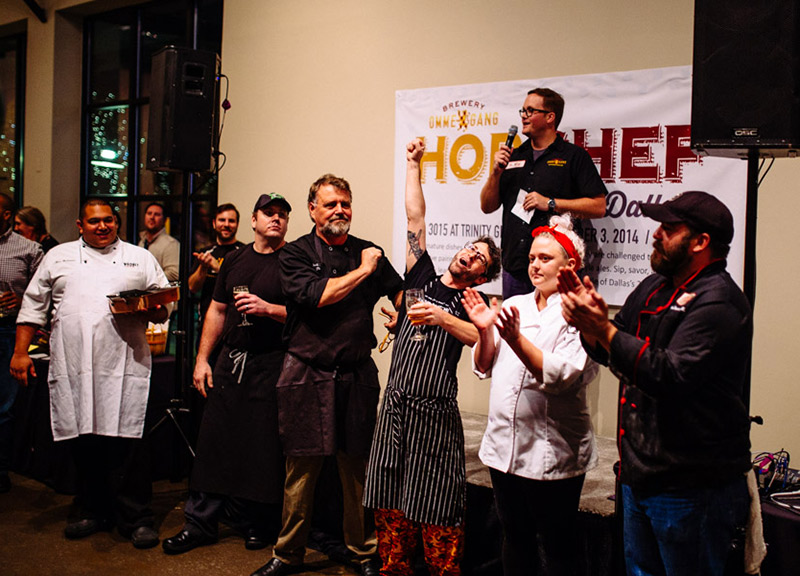 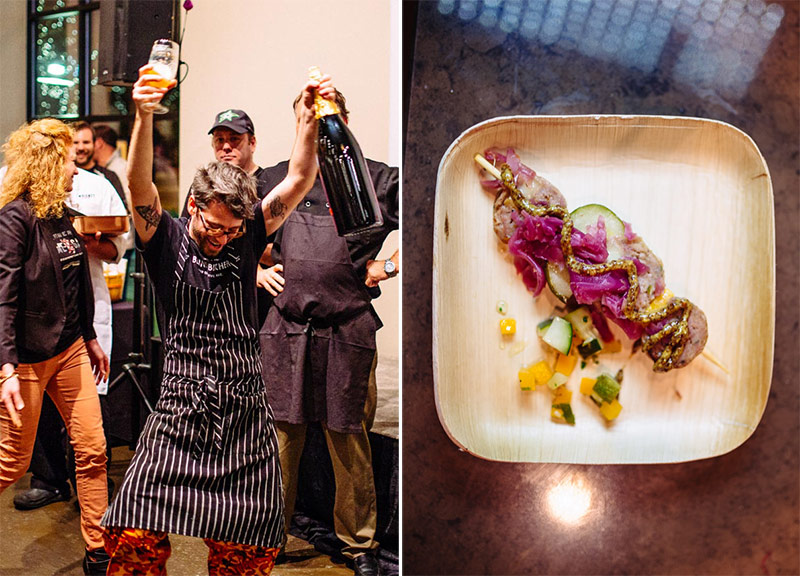 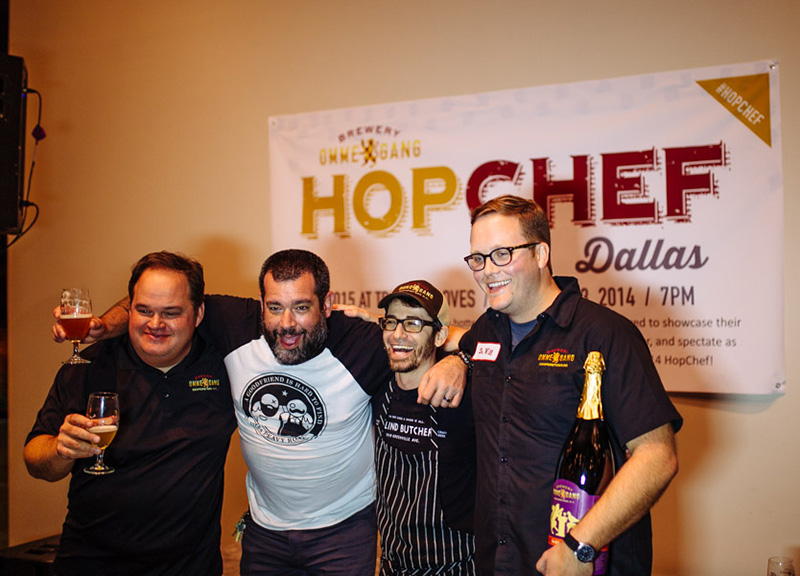