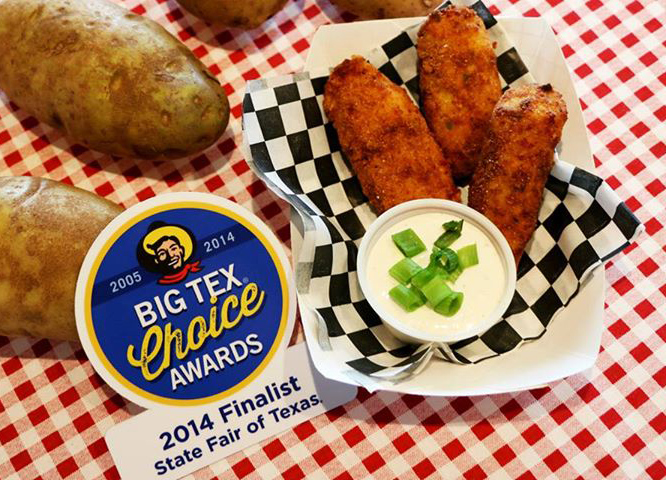 Turns out, it's not illegal to pick bluebonnets in the State of Texas. Nor is it illegal to pretend to deep-fry the state flower, either, it seems.

And, yes, someone is pretending to do just that this year at the State Fair of Texas. Earlier today, the State Fair announced its finalists for its 2014 Big Tex Choice Awards — or, in other words, the new, mostly obnoxious and over-the-top food items that are being introduced for purchase at this year's fair season, which kicks off on September 26.

Rather than actual bluebonnets, this year's “Deep-Fried Texas Bluebonnet” offering really just a deep-fried blueberry muffin that's been stuff with cream cheese and white chocolate. Pretty exciting stuff — although not nearly as exciting as the Fried Sriracha Balls, which we suppose at least one North Texas-based politician is excited about, and a Funnel Cake Ale.

But, wait, there more! Check out the below list, complete with photos and descriptions, courtesy of the State Fair itself.

• Chicken-Fried Loaded Baked Potato. “The creamy and moist insides of a baked potato, loaded with generous amounts of butter, bacon, and cheddar cheese, are coated and battered with a delectable blend of spices and flour that create a perfect combination of fried crispy crust and delicious, creamy loaded baked potato. Served with a ranch dipping sauce.”

• Deep-Fried Texas Bluebonnet. “A blueberry muffin, scone-style batter that is stuffed with cream cheese, blueberries and sweet morsels of white chocolate. It is baked and deep fried to a perfect golden brown. This mountain of flavor is topped off with whipped cream, chopped white chocolate morsels, powdered sugar, blueberries, and a delicious blueberry glaze.”

• Fried Gulf Shrimp Boil. “Everything you would expect in a shrimp boil rolled into a ball, dusted with fish fry, and fried to a golden brown! Baby gulf shrimp, diced red potatoes, onion, lemon, and seasoning are formed around a cocktail shrimp, dusted and fried with the tail sticking out for a handle. Served with a remoulade sauce.”

• Fried Sriracha Balls. “A lip-smacking combination of shredded chicken, corn, green chilies, tomatoes, and Sriracha hot sauce, formed into balls and coated with crispy tortilla chips. It is then flash-fried until golden brown. For those who like their food higher on the Scoville Scale, extra Sriracha Sauce is available.”

• Fried Sweet Texas. “Traveling across Texas to try the best and most popular desserts gave inspiration for this fried treat. Fried Sweet Texas starts with fresh pie dough filled with crunchy pecan pie, juicy peach cobbler and creamy buttermilk pie. It is then deep fried until the crust is golden brown and flaky, and then served up with a side of Texas’ own Blue Bell Vanilla Ice Cream. A real tribute to Texans and their amazing sweet treats!”

• Original State Fair Brew (Funnel Cake Ale). “A light and delicious ale brewed to be reminiscent of one of the telltale flavors of the State Fair – FUNNEL CAKE! This refreshing English style summer ale has been brewed to be ready and crisp, with just the right amount of toastiness and sweetness, finishing with delicate notes of natural vanilla; all great flavors you find in a perfectly executed funnel cake. For those whose taste buds call for a sweeter finish, take advantage of the option to have the rim of your cup coated with powdered sugar. Must be 21 years of age.”

• Twisted Texas Tacos. “What do you get when you combine the four major food groups of Texas? Chicken Fried, Barbecue, Tex-Mex, and Chili – Twisted Texas Tacos! This taco starts off with tender, juicy hickory smoked Texas beef brisket, double-dipped in a barbecue spiced buttermilk batter and deep fried until it is robust and beefy. It is served in a warm flour tortilla, generously layered with a Mexican cheese blend, crispy fried okra, and a sweet and crunchy tri-color slaw, accented with zesty poblano and sweet pepper corn. Served with a creamy country gravy, spicy Texas Chili and a miniature salute from the Lone Star flag.” 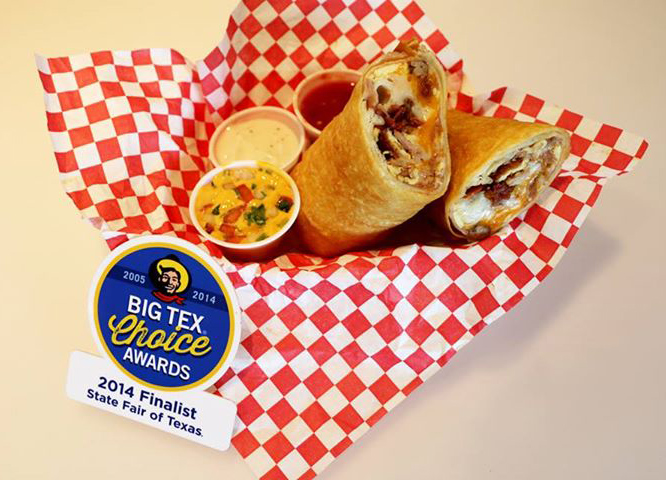 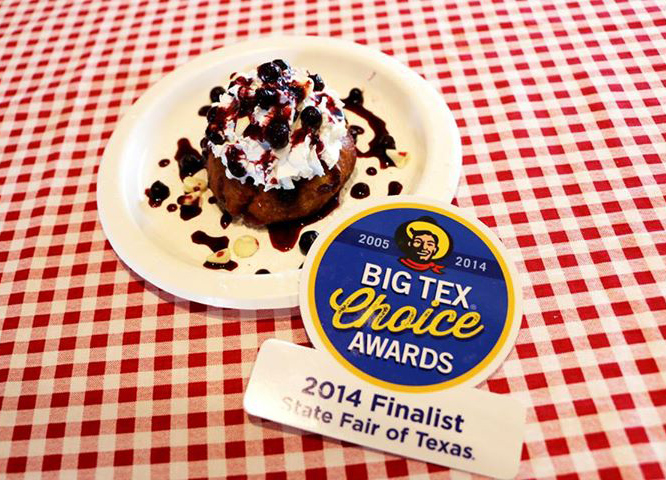 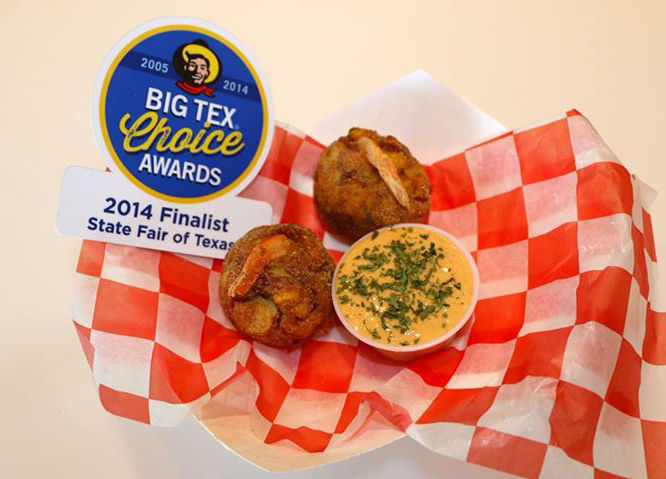 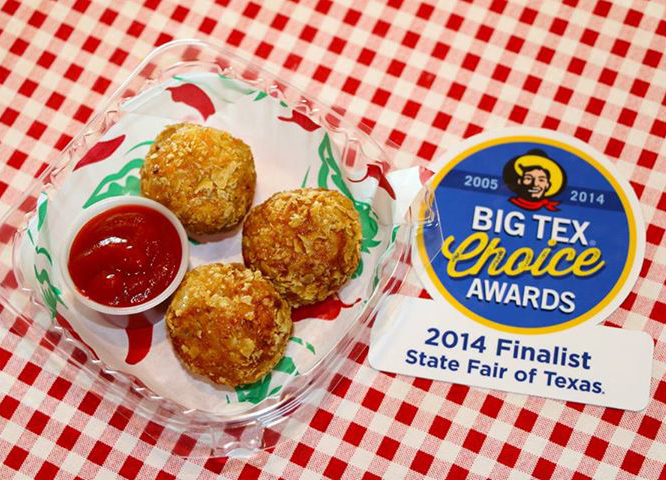 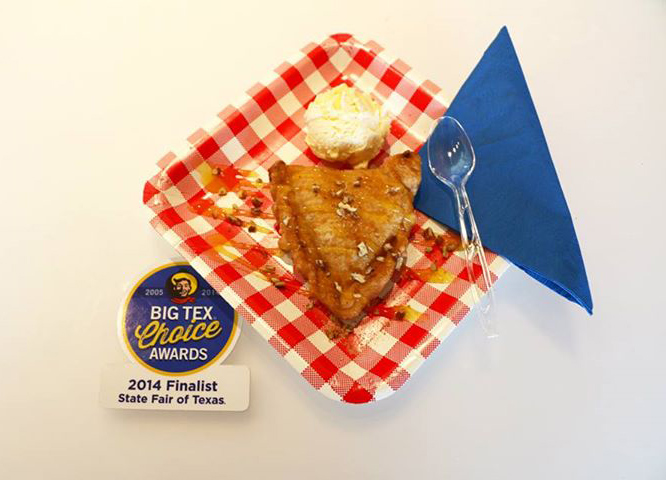 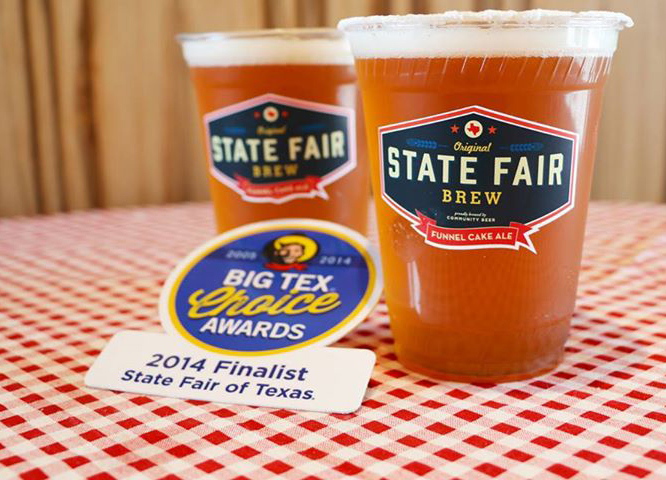 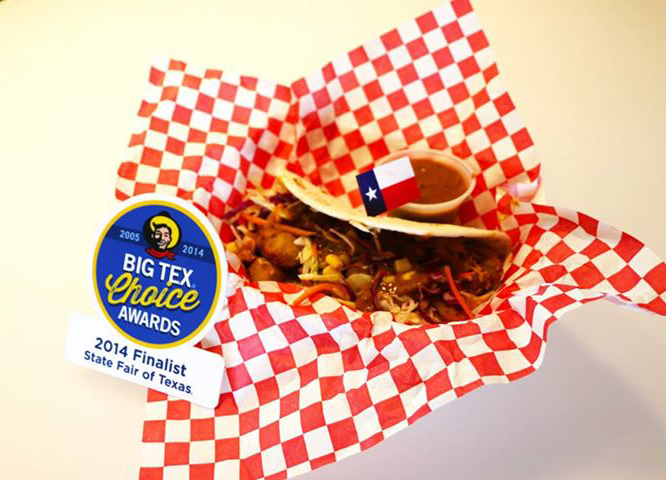