Forechecking: The Western Conference Champs Are Back! 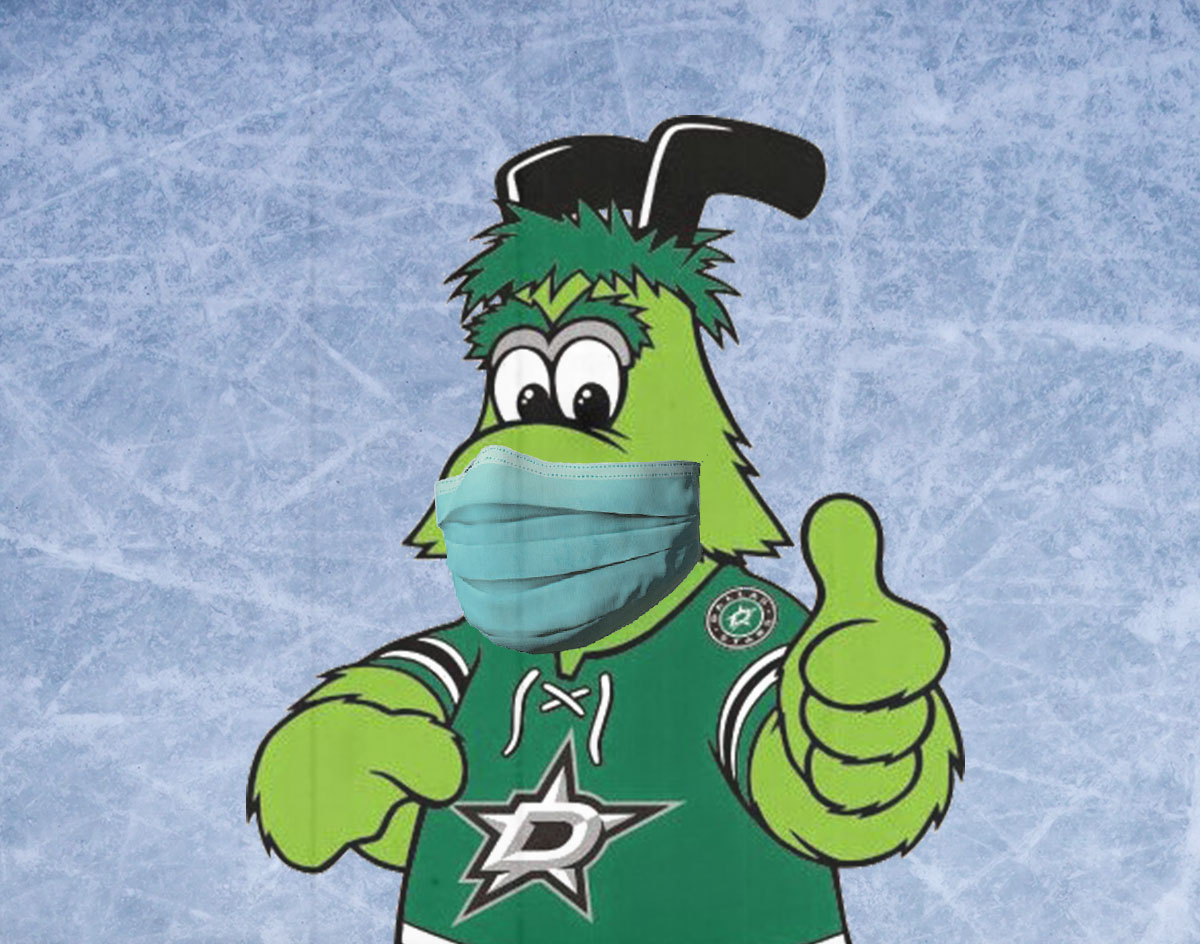 At This Point, 17 Players On The Dallas Stars’ Roster Are Fighting COVID-19 And We Have No Idea When The Season Will Start. But Let’s Still Preview It!

Your Western Conference Champion Dallas Stars are back!

On January 19, Jamie Benn and the bois in Victory Green™ are slated to take to the ice in competition once again — and for the first time since succumbing to the Tampa Lightning in Game Six of the Stanley Cup Final back in September. Or so we think! With as many as 17 players testing positive for COVID-19 currently, the Stars’ already-delayed NHL season start could be delayed for a while, honestly.

But there’s a lot to look forward to when that moment arrives. After four months away from competition, the Stars’ largely unchanged roster will aim to repeat as “Best in the West” and hope to flip its incredible 2020 success into a 2021 championship.

It’s really tough to figure out what all these COVID-related concerns will mean to the team’s on-ice performance, but we do know that the Stars will start their season without forward Tyler Seguin or goalie Ben Bishop, both of whom are still recovering from surgeries.

Is that an ominous way to start the season? You betcha, but when has this team ever had things easy?

What Do You Need To Know About This Upcoming Season?

There are new divisions! As you may have heard, the still-ongoing coronavirus pandemic has made a mess of pretty much everything — and between travel restrictions and public gathering mandates, teams will be unable to cross the Canadian border. Ergo, the league has restructured into four, mostly geographical divisions. Dallas will join the Carolina Hurricanes, Chicago Blackhawks, Columbus Blue Jackets, Detroit Red Wings, Florida Panthers, Nashville Predators and the Tampa Bay Lightning in the Central Division now — and, honestly, we love it. From an entertainment perspective, Stars fans will get a protracted look at some exotic Eastern teams and avoid the dreaded 9 p.m. start times that would’ve been inevitable had the Stars been placed in the West Division as originally planned. From an competition based perspective, the Stars are well positioned. Of the team’s seven division mates, only the Lightning, Hurricanes and, to a lesser extent, the Blue Jackets are poised to be major challengers to the Stars for playoff seeding. But crazier things have happened! (Like everyday.)

It’s a shortened season! This year’s got just a 56-game regular season, followed by the usual playoff format in May.

What’s Going On Up Front?

Thanks to Jim Nill’s timing of contract expirations, the Stars have had very little turnover from last season’s roster in general,  but especially so among its forwards. Veteran wingers Corey Perry and Mattias Janmark are the team’s only forward losses from the Final team, and they’ll be replaced by any combination of these familiar faces and young whippersnappers:

Justin Dowling: The Stars’ Band-Aid, the 30-year-old will likely see duty in the lineup throughout the season in different roles — just as he has in the past. Dowling is not a long-term fix, no. But he’s competent, and with Tyler Seguin out for most of the season, expect some shuffling of personnel.

Joel L’Esperance: The Texas Star has seen several call-ups to The Big Show to this point, but hasn’t forced coaching staff to keep him around for more than a cup of coffee. We don’t see Joel overtaking other depth players to be a regular, but at 25 years of age, it’s now or never for him as an NHLer.

Ty Dellandrea: Anointed as a Radek Faksa 2.0 of sorts, Dellandrea has been a topic of discussion for fans for some time now. The 2018 first-round pick hasn’t made the jump to the NHL yet like class-mates Rasmus Dahlin, Brady Tkachuk or Quinn Hughes, but we’re hoping young Ty can put together a strong enough three-week stretch at the beginning of the season to keep him around. Otherwise, he’ll be returned to the AHL for additional seasoning. We like what the 20-year-old center brings to the club, although he may be better served with more ice time in the minors.

Nicholas Caamano: Another Texas Star tasked with call-up duty last year, this versatile spark-plug winger is our pick for holding down the fourth line to begin the season. The former fifth-round pick has limited offensive upside, but his wheels and physical play make him a good energy winger.

Jason Robertson: The left-winger selected 39th overall in the 2017 draft, will have to battle his way into the top six if he’s gonna make the NHL roster. An intelligent goal-scorer unfortunately better suited for a role that isn’t available yet, we don’t foresee the coaching staff relying on the California native in a checking role.

All gas, no brakes 🔥 pic.twitter.com/XWYcU2B5Fm

The four-headed monster returns in all its glory. Miro Heiskanen, John Klingberg, Esa Lindell and Jamie Oleksiak will continue to patrol the Stars’ back end this season as the core embodiment of the team’s identity. Arguably the league’s best two-line combo, expect no changes in roles for these minute-chewing defenders. Andrej Sekera will handle the bend-don’t-break third pairing with what we expect to be a rotation of players. Taylor Fedun returns to the team as its utilitarian option, newly acquired eight-year NHL veteran Mark Pysyk will see minutes from time to time and Julius Honka (yes, that Julius Honka) is once again an option. But among the new faces, we’re most excited for Thomas Harley. A member of Team Canada in this year’s World Juniors, Harley’s promise as puck-mover on the third pairing could make for a very mobile Dallas defensive unit. Head coach Rick Bowness may eventually opt for a more defensive player in that role, but if Harley can make a positive impact early in the season, it should be his job to lose.

How ‘Bout Those Goalies In The Back?

Fresh off a Stanley Cup run and a newly signed three-year deal, Anton Khudobin is back in net for Your Stars at the start of this season. With Bish out for the foreseeable future, the Kazakhstani fan favorite returns as the Stars clear cut No. 1 netminder. For the time being, he’ll be backed up by highly touted prospect Jake Oettinger. You may remember Oettinger from his limited run of mopping up garbage time in the playoffs last summer — and stopping all eight of the shots he faced in 37 minutes. While he’s still wet around the ears, the 2017 first-rounder continues to develop to the Stars’ expectations, and he should prove to be a competent goaltender against the division’s lesser squads as he learns the ropes. As for Bish: Still recovering from his October 21 surgery to repair a torn meniscus, he’s eyeing a late March debut at best, giving him a full month of play in preparation for the playoffs. (Fingers crossed.)

How About Three Keys To The Team’s 2021 Success?

1: Getting off to a good start. Unlike like last year, where you could Cinderella your ass from a seven-game losing streak to a Cup Final run, a slow start in a 56-game schedule could effectively tank playoff hopes for any potential contenders just a month into play. In turn, we expect a hungry squad brimming with confidence out the gate — and, with very few new faces in the lineup or behind the bench, the Stars don’t need a lot of runway to get their system up and running to full effect.

2. Firing up the young guns. We love how the Stars’ vets led the way offensively through crucial junctures of the 2019-2020 season, but for the team to elevate its scoring numbers from among of the league’s worst to at least average, young forward Roope Hintz and Dennis Gurianov are going to have to find more consistency in their production levels. Some of that will come from long-overdue bumps in ice time, but without Seguin in the lineup, these two speedsters absolutely need to take ownership and force the coaching staff to use them in more situations. Gurianov particularly has the potential to be a 40-goal scorer in this league, and Roope has all the skills to be an All-Star. Now let’s see it!

1. Probably some dumb luck. Quite frankly, the Stars are going to need a bit of good fortune if they want to navigate the season to their/our satisfaction. There are many variables to any given season — ones that are beyond a team’s control in even a regular NHL season — and, in a year as bizarre and unpredictable as this, it’ll help to find a penny or two.

The Stars are back, everybody — and they’ve got one thing on their mind…