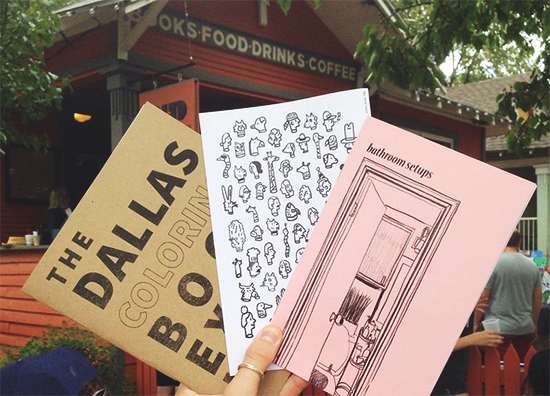 The First Dallas Zine Party Was An Instant Success.

Through bouts of rain, shine and those waves of humidity that immediately follow those short spurts of drizzle that just happen because surely Horus or Zeus is just fucking with us, The Dallas Zine Party took place at The Wild Detectives this past Sunday afternoon. And, gloomy weather aside, the attendance was healthy, with upwards of 200 people coming through to celebrate the delightfully more weird and artistic side of Dallas and its independent micro-publications filled with art and literature.

Randy Guthmiller, a man of many hats and the event’s founder, had been dreaming the event up for about a year and a half and was inspired by zine parties around the country, like Houston’s.

“Every world-class city should have one,” Guthmiller told us excitedly on Saturday. “This is something that the community needed.”

Even better, he got the pop he was looking for in that regard. Guthmiller said one of his goals for the party was to allow the event’s exhibitors a chance to sell out of all the merchandise they brought along to sell here. And, far as we can tell, most of the vendors who stuck around until the end did just that.

In all, the Dallas Zine Party had about 30 exhibitors come through, 25 of which hail from North Texas. Among them were Guthmiller’s own publication Shapes, as well as lifestyle, arts and culture magazines such as Denton’s Austere and Dallas’ THWD. Also on display: Broken Fingers, a skateboarding quarterly, and Modernizm Zine, which comes from Texas’ second best city, Houston.

Really, the whole thing boasted a host of different sensibilities for all kinds of different folks. And there was even live music from Jakkkechan, Moth Face and Kitbashes on the shop’s back porch, too.

“With zines, there are no rules,” Guthmiller said. “They cross-pollinate.”

So here, on a Sunday afternoon during Labor Day weekend, all things art, literature and music converged. Next year, things are looking to expand, too. Guthmiller told us he’s already been approached by a larger venue to host the party. He’s also seeking status as a non-profit for his concept.

Here’s hoping that growth does come. Sunday’s was a wonderful event — and one that undeniably placed substance over commerce.

“I’m pretty sure I’m losing a lot of money doing this,” Guthmiller said with a laugh at one point.

Doesn’t mean the the rest of us aren’t all richer for the effort, though. Because we certainly are.