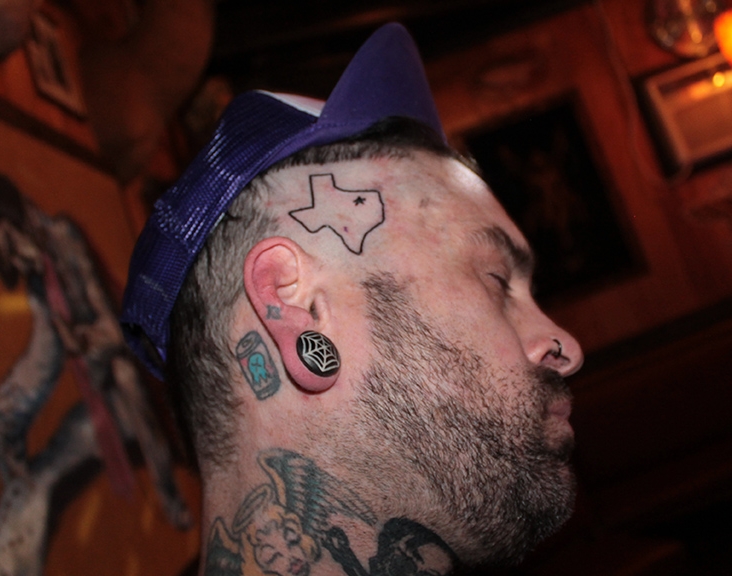 Tough Guys With Face Tattoos Are Upset They Can’t Go to One of Many Beer and Burger Spots in Dallas.

Update: Matt McGinnis, founder and president of Pen & Tell Us, the marketing agency that works with Little Woodrow’s, issued the following statement, saying the chain has since renounced its face tattoo policy: “Little Woodrow’s does not have an issue with tattoos as evidenced by the fact that we had no restrictions on tattoos of any kind except at two of our 16 locations. At those locations, we implemented a policy where we requested that neck and/or facial tattoos not be openly displayed. After further review, we have rescinded this policy. We continue to focus on providing a safe and comfortable environment for all our guests. The company regularly reviews and modifies its policies when it is deemed reasonable to do so.”

Tattoos on the face, hands and neck are commonly referred to us inked up folks as job stoppers. The kind of statement you make when you’re ready to forever preclude professions like bank teller, news caster or high-paying corporate gig from your future career outlook.

Turns out, they’re also dinner stoppers, too. The web has been crying afoul after a Midland man was recently turned away from the beer and burger chain Little Woodrow’s for having a tiny little face tattoo. Despite the loads of negative online reviews, Little Woodrow’s is well within its rights to continue enforcing its chain-wide policy to deny entrance to patrons who refuse to cover up their face or neck tattoos – just like many face tatt-bearing Dallasites have the right not give places like recently opened Little Woodrow’s location on Ross and Hall money they could otherwise be saving for more job stoppers.

“We do not prohibit anyone from having tattoos and entering the establishment. We prefer that there be no face or neck tattoos,” says Philip Brinson, attorney for Little Woodrow’s restaurant and bar in Midland.

Title II of the Civil Rights Act of 1964 prohibits discrimination in places of public accommodation based on race, color, religion, or national origin. Furthermore, the Americans with Disabilities Act prevents discrimination on the basis of physical or mental disabilities.

Currently, tough guys with face tattoos aren’t considered a protected group under either of those acts.

Even still, members of groups that are protected by those acts can still be refused service at privately owned places of public accommodation (i.e. craft beer bars springing up in currently gentrifying neighborhoods) as long as the refusal isn’t applied to just one group of people.

That’s the key difference here — where folks not born with face tattoos chose to get them knowing that not 100 percent of their life would be exactly the same as beforehand – and with cases like what happened at Kung Fu Saloon not so long ago, where a dress code barring patrons from entering who not wearing socks was only being enforced towards patrons who were minorities. That’s a situation that was truly fucked up. It’s one thing to be discriminated against because of the way one was born; it’s an entirely different issue to intentionally alter one’s appearance and get offended because people took notice and acted in an unfortunately predictable manner.

World famous tattooer, Elm Street Tattoo owner and Ink Master judge Oliver Peck best summed it up in his quote to CBS earlier this week: “A young kid today gets a neck tattoo and all of a sudden they can’t go into a restaurant. Yeah, that’s what you get. Like, you chose to be a part of the underworld.”

Just like you can choose how to react. You can either cry all over that teardrop tattoo of yours, or just go and find a cooler bar to drink in.

Sounds like an easier call to make than what kind of art do I want to wear on my face for the rest of my life, to be honest.