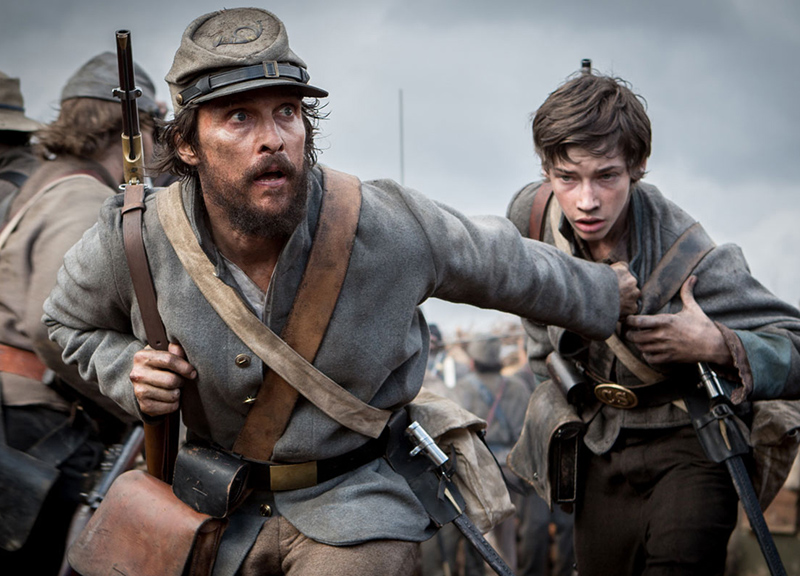 Not Even An Impassioned McConaughey Can Save The Disjointed Free State of Jones.

The Civil War represents a time period that Americans generally don’t like talking about too much. Sure, we mention that it happened in history class — but the details are just awful.

It’s a wonder the states ever pulled themselves up again in its wake, really.

Attempting to show a more personal side of this point in American history is Free State of Jones, which tells the story of Newton Knight (McConaughey) and the rebellion he led against the Southern forces.

Knight was a nurse for the Confederates. But eventually, this poor farmer from Mississippi had enough of fighting a rich man’s war. So he left his post and gained a following of men, women and former slaves, who were tired of Southern officers raiding farms for food and other items. These people rebelled to take back over their farms in Jones County as the larger war raged on around them.

That’s not the whole story here, though. As things progress in this film, audiences also learn of the troubles this group faced after the war ended — from Southern farmers still using slaves to former slaves just getting the right to vote. And they’re even thrown forward to the 1940s for a court trail, too.

It’s a lot. And what starts as an inspiring film about one man taking back control of his hometown before long ends up becoming an over-saturated mess.

Free State of Jones is less a movie than the cobbling together of a highlight from a miniseries that never ran, like the filmmakers felt they had to touch on every aspect of this inspired-by-real-events story. In turn, nothing feels fleshed out, and as soon as one problem is mentioned, the film just moves right along to the next — with title cards and all, lest the audience not have every last goddamn thing spelled out for them.

McConaughey does well enough in his role as the rebellious Knight. He’s a stoic leader who spits out multiple inspirational speeches as often as he fights. He believes in equality for everyone, but even within his rebellious group, not everyone believes that. Some just want their farms back. That’s a pretty fascinating dynamic, actually, and one that this film should’ve spent more time dissecting.

Instead, in trying to tell everything, this film ends up accomplishing very little. Its tone suffers for it, too. During the Civil War part, many of the scenes feel grand in scope as audiences get some gritty war scenes and insights into the interesting guerrilla war tactics Knight and his group use. Intriguing and ripe for character development as that all is, though, it just gets rushed past so the second, far-more-disjointed half can have its day. In the end, the film falls short in its epic historical drama efforts.

Free State of Jones could have been great if it streamlined its efforts to tell the story of one man fighting for the injustice of the South. It still has its moments, I guess. But the few shining spots get lost in the saturated story.