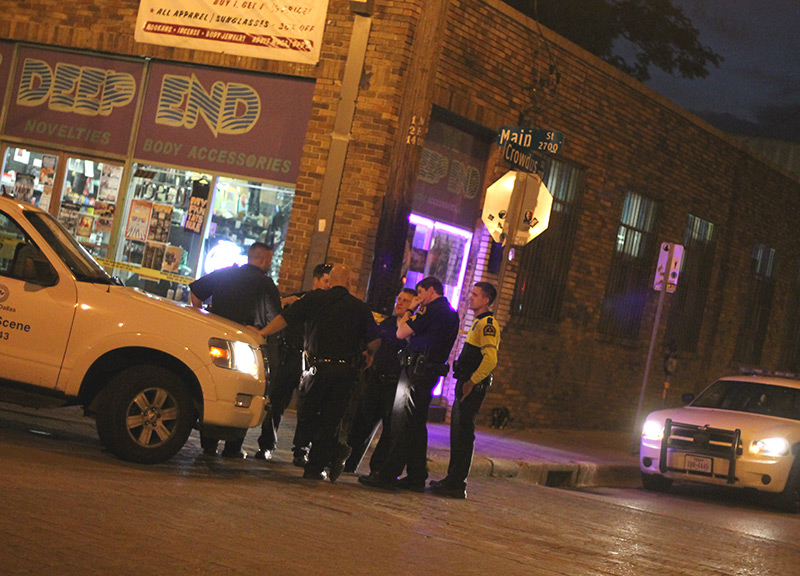 DEEP ELLUM — If the black cat shuffling lazily past The Deep End at 9:30 tonight had to come offer up some bad omen, it had arrived about an hour too late.

Things were relatively serene at this point in front of the Deep Ellum head shop located at 2721 Main Street, right at the Crowdus intersection. There were still six squad cars and at least eight police officers inspecting the store, sure. But things had calmed down significantly as compared to the scene right before 8:30 p.m. There were more cops then. More traffic, too.

At 8:30 on Wednesday night, police had blocked off the intersection half a block in either direction, responding to an alleged break-in at the store and a reported hostage situation taking place inside. After a standoff, officers rushed into the store, apprehending a suspect and hauling away two alleged victims for questioning.

An hour later, police weren't ready to reveal too many other details.

“We're still trying to figure it all out,” Dallas Police Department sergeant Frank Gorka said. “The good thing is that we know no one was hurt.”

Well, not injured, at least. Marek Halama, owner of The Deep End, was napping at 8:30 when he was called and told to get to his store. Upon arriving, he says, police told him that his store was the victim of an attempted robbery, that one of his employees — a woman named Angel — had called the police, that she had been taken hostage, that she may have been tied up while inside the store, and that there was likely a gun involved.

“I'm sure she's traumatized,” Halama said of his employee, whose last name he wasn't willing to reveal. “She called the police when it was happening. Then her boyfriend showed up — and I think he had a gun put to his neck.”

Far as Halama could tell, nothing from his store was missing from the attempted robbery. But, once police allowed him into the scene, he found that there was plenty of damage to speak of in his office.

“My ceiling is done,” he said.

Halama said the damage was the result of police chasing the suspect into his back office and the scuffle that took place as the suspect tried avoiding apprehension.

Tensions were high at that point.

“[Just] a whole bunch of shouting going on,” said Deep Ellum resident Joshua Stephens, who was headed home to his apartment when the traffic block got in the way of his commute.

With things starting to settle down closer to 10 p.m., Halama said he was just glad to know that no one had been physically injured. And, to his credit, he looked quite calm when discussing the whole matter.

“I mean, I guess when your business is right downtown, this stuff happens,” he said. “It's inevitable to a degree when you're in a city of this size.”