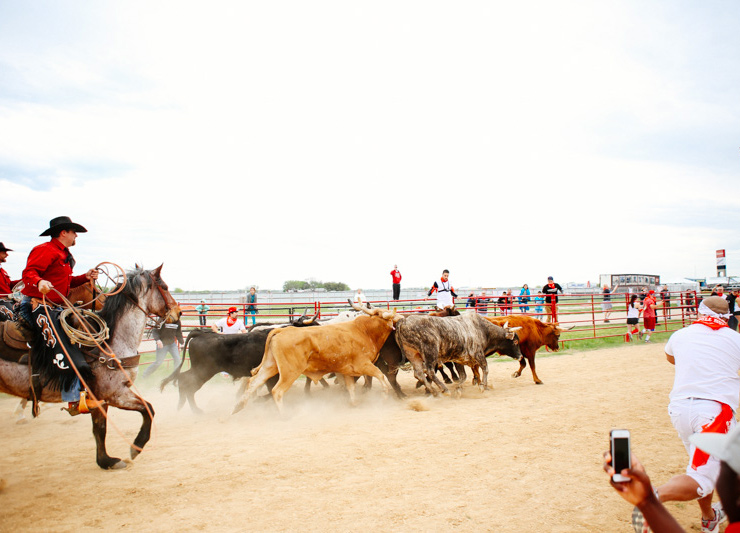 Panhandlers, Escaped Bulls and Johnny Manziel Were Loose On Dallas Streets This Week.

You're Zika!: Good job, Dallas. First, we become the epicenter of Ebola in the U.S., and now there are not one, but two cases of the Zika virus here. The carrier picked it up in Venezuela and passed it onto another person whilst getting it on. Yes, that's yet another STD you can pick up if you're not careful. No mosquitoes in Dallas have actually tested positive for the virus yet, but the World Health Organization estimates there could be up to 4 million cases across North and South America this year. So batten down the hatches, it's gonna be a rough summer. Minus 2.

Gone for Good: In news that's devastating especially for family and friends, but also the community at large, two Plano East High School seniors apparently took their own lives over the weekend. Ritu Sachdeva and Hillary Kuizon, both seniors, were found dead early Sunday morning. Sachdeva died of a medication overdose and Kuizon by hanging. Police are currently investigating whether a suicide pact was involved. All anyone knows for sure is that there's a huge loss that can't be replaced. Please know that if you, your friends or your children are battling depression, there are people who want to help. Minus 2.

Can't Handle It: As the Dallas Observer put it, imagine being hauled off to jail when you get pulled over for speeding — not for missing your court date, mind you, just for speeding. The first time. Legally, it's the same classification — a Class C misdemeanor — as panhandling, or “solicitation by coercion,” as the Dallas statute puts it. As part of a crackdown on the uptick in violent crime near Downtown, which includes more arrests for drug dealers, DPD is also sending what it deems “aggressive panhandlers” straight to jail. Do not pass go. Definitely do not collect $200 from passersby. Tanya Ragan, the most vocal anti-homeless advocate, is calling for “zero tolerance” and “tough love.” Sure, there's occasionally an intimidating guy who will get in your face, and those guys need to be reprimanded, but is this the best we can do as a city? We're once again trying to deal with a symptom of a much bigger problem, because right now it's the easiest thing to do. We're trying to get homeless people off the street, but only in the most superficial way. We're not trying to actually help them; we're just trying to sweep them under the rug, like too many cities try to do. Minus 3.

Bones About It: A missing persons story came to a very sad ending nearly a year after it first began. Plano resident Christopher Tennyson went missing on April 4. A bicyclist found bones — including a skull — near Carlisle Elementary School on Wednesday. A medical examiner confirmed what Tennyson's family feared: Those were Chris' remains. Minus 1.

Johnny No-Angel: If he only sort of wanted him before, Jerry Jones will really want Johnny Manziel now — y'know, given the Dallas Cowboys owner's penchant for gambling on scumbags like Greg Hardy and Joseph Randle. The embattled Cleveland Browns quarterback (for now) is facing allegations that he hit ex-girlfriend Colleen Crowley while the two were at Hotel ZaZa late last month. Dallas police aren't investigating, but a Fort Worth police report relays some vague details of the incident. This isn't the first time the Heisman Trophy winner has been accused of this type of thing, either. In October, he was questioned by Avon, Ohio, cops about another incident with Crowley. Even though he hasn't been officially charged with a crime, the NFL could still suspend Manziel. Though, who are we kidding, nothing will probably come of it. Minus 2.

A Load of Bull: Driving on Dallas streets is nearly always a hazardous practice, but for once it wasn't potholes that were biggest threat to local vehicles. On Sunday night, a loose bull was seen running through traffic on I-35 near the Walnut Hill Lane exit. After some honking, the beast eventually yielded his right of way, moseying away from traffic and towards his worried owner, who was able to recapture his cash cow. Plus 1 that nobody got hurt, and Plus 1 more that somebody managed to film it happening on their cellphone.