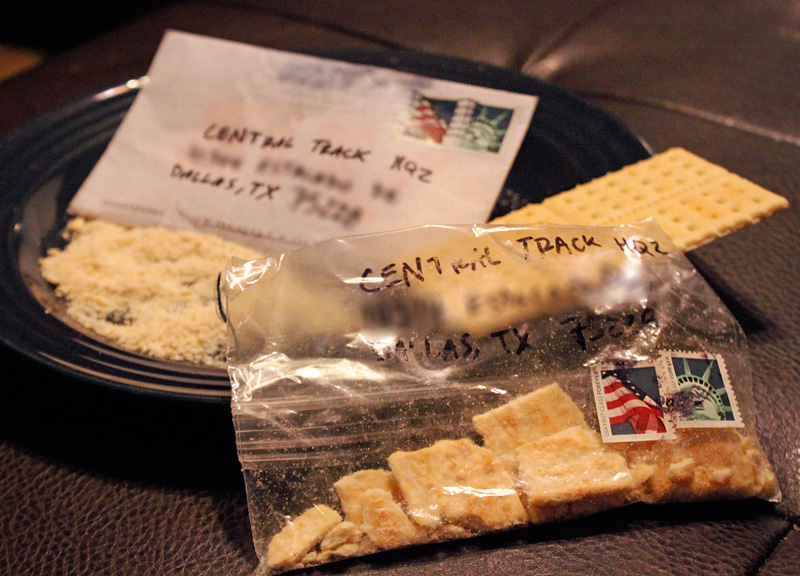 Envelopes Aren’t All They’re Cracked Up To Be.

A couple of weeks back, we came up with the theory that unpackaged items sent through the mail — or even those packaged in such a way that the contents are clearly visible — are handled much more carefully than those mailed in more conventional containers. It stands to reason, in our minds at least, that in the case of a conventionally packaged item, the mail carrier may assume (in some cases wrongly) that the sender went to the proper care when wrapping and securing their item.

We attempted to test this theory once before with an un-sleeved vinyl record. And while that go-round did provide us a compelling tale involving urine samples and a befuddled postman, it didn’t necessarily give us definitive proof that our little hypothesis carried any real weight.

For one thing, we overestimated just how fragile a record really is.

While a single grain of dust on one’s stylus does have the power to forever alter an album’s playback, the change isn’t really visible to the naked eye. In fact, the more we thought about it, the only time we can really recall seeing a record break was when our 13-year-old selves found a box of our friend’s dad’s old vinyl in his garage and decided to hurl one Frisbee-style across the room at his head.

In retrospect, even if our vinyl had come back damaged, it still wouldn’t have really proved anything, as we would have had nothing to compare it to as we had not simultaneously sent a packaged version for comparison purposes.

So, this week, we picked one of the most fragile items we had on hand — crackers. These things, with their vertical and horizontal perforations, were not just brittle, they were almost unreasonably delicate. We really had zero expectation that we would be receiving a fully-intact cracker this week. But, then again, that wasn’t really the point.

For the first time ever, we sent two packages to ourselves — one wrapped in a standard white letter envelope and one using our tried-and-true plastic baggie method. We wanted not just to see if the crackers would mail; we wanted to see which came back in better shape.

Just as predicted, the crackers in the plastic baggie came back in drastically better shape.

Sure, it very well could have been because the crackers in the envelope were treated as “letters 1st class” while the crackers in the baggie were considered “packages / lumpy envelopes 1st class,” and therefore handled differently, but we like to believe there’s at least an element of validity to our unconventionally packaged items theory.

Item: Crackers.
Estimated Value: Less than $1.
Cost of Postage: $0.90 (each).
Method: We placed one cracker in a standard white letter envelope and another in a plastic sandwich baggie which we folded to be the same approximate size as the envelope. Other than the package materials, we tried to make the two items appear as similarly as possible.
Days to Deliver: Two.
Condition Upon Arrival: The cracker in the envelope was completely obliterated. Not one chunk remained. The envelope itself was soaked through with an oily layer of butter, and crumbs were leaking from the corners. On the other hand, the cracker in the baggie was relegated to several medium-sized chunks. It was in no way unscathed, but it very clearly fared much better than the other one.
Running “Can You Mail It?” Success Rate: 90.9 percent.