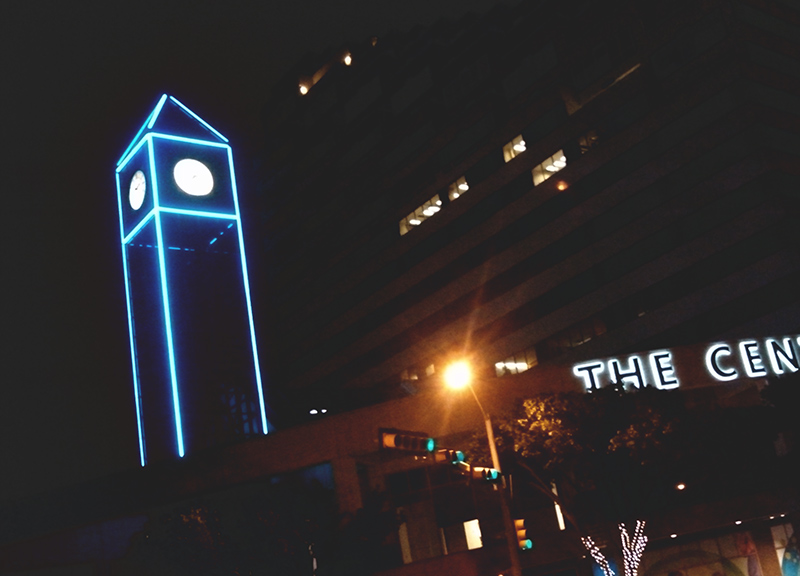 The Green Building May Temporarily Be Dark, But Cedar Springs' The Centrum Is All Blue Now.

It's been a weird couple of weeks for the Dallas skyline.

In late June, maintenance workers finally took to the rooftop of the Magnolia Hotel to repair the Neon Pegasus statue that had sat for months in its place among the clouds unlit. Then, about after that Downtown Dallas feature returned, another icon of the skyline vanished: Bank of America Plaza, known colloquially and affectionately as “The Green Building,” shut off its green argon piping so builders could begin replacing those dated fixtures with new, brighter LED lights.

Quietly, though, another tall-ish Dallas building has picked up the light-up popping slack in Bank of America Plaza'ss stead: A few months back, a building called The Centrum, located at the intersection of Cedar Springs Road and Oak Lawn Avenue, saw its clock tower adorned with bright blue neon piping.

Sure, the tower is significantly shorter than the temporarily non-lit Bank of America Plaza, but it still looks pretty cool.

“They were put up as an enhancement to the building,” Brad Moseley, the manager of office and retail at the Centrum offers up, simply enough.

And, it seems, the ploy has worked: All developer-owned condos in the building are currently occupied.

As for the blue color, though? Moseley says it was just the buildingâ€™s owner's choice. But I feel like it's a safe assumption to note that, since the building looks pretty blue in the daylight, it was the natural choice. Plus, the flash definitely also adds a certain something to the building, which has slowly been becoming more and more relevant over the course of the past few years.

In late 2011, you may recall, they opened the Winston Supper Club.

Plus, it's right off the Cedar Springs strip, where there always seems to be a party going on and plenty of eye candy to take in.