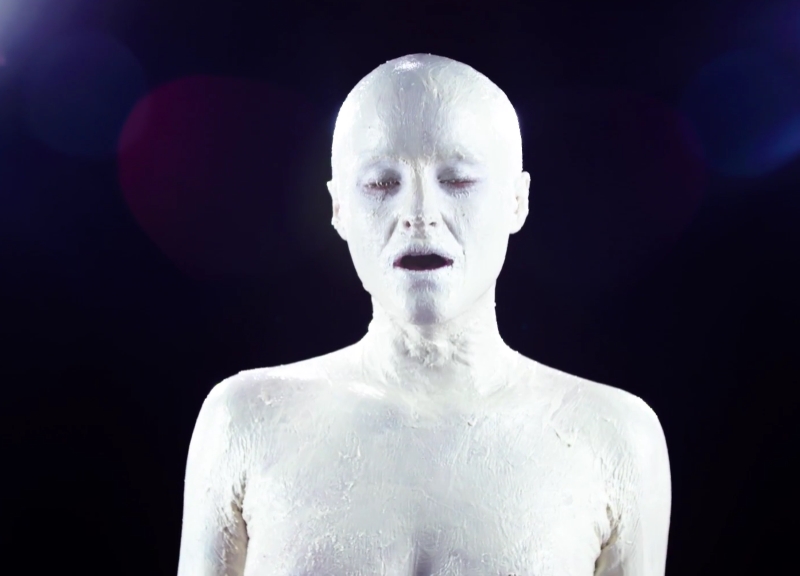 With some obvious nods to acts like St. Vincent, the Brooklyn-based duo Tiger + Man released a killer, self-titled debut EP back in March. An alum of Dallas’ Booker T. Washington High School for the Performing and Visual Arts, singer-songwriter Tiger Darrow and her film-scoring partner Andrew Orkin (aka “Man”) juxtapose sweet-sounding vocals and sporadically angular guitar lines, blending in elements of alt-rock and electronic music in the process.

With Pride Weekend coming up, Tiger + Man felt it an appropriate time to allow us to premiere the video for album closer “Paper Cranes,” a song the duo says is “is representative of feeling suffocated by the views/beliefs/opinions of others.” It’s a simple, yet poignant clip, all shot in one take due to Darrow’s harrowing experience during the shoot, in which she can be seen suffering an actual panic attack on screen.

Explains Tiger about the circumstances that led up to the frightening turn: “That was liquid latex in the clip. Andrew dreamed up the idea of this anonymous subject painted in all white to symbolize humans as a virginal, clean slate before they are influenced by outside stimuli to ‘color’ them — their thoughts, opinions, ideas…We got everything set up at Bravo Studios, I got painted up in white latex from head to waist, and then the fun began. What we didn’t account for was that, even though we let the latex breathe a little before letting it drop onto my head, the smell of ammonia would still be incredibly strong. Everything was fine until we got to the very end of the take — when the latex had finally clogged my ears, glued my eyes shut and plugged my nose. I cracked my mouth open to try to take a breath, but inhaled ammonia and latex. The more I inhaled, the more I got ammonia. So I panicked. Nearing the end of the video, you can see the beginnings of my panic attack. At the very end of the video, before we fade to black, my tears are very real. This was a really fun one to shoot (albeit pretty terrifying).”

Terrifying, indeed, although the simple-yet-effective resulting video was inarguably worth suffering for her art. “Paper Cranes” stands as a powerful statement during a time when things like the recent Orlando nightclub shooting make these types of issues more critical than ever.