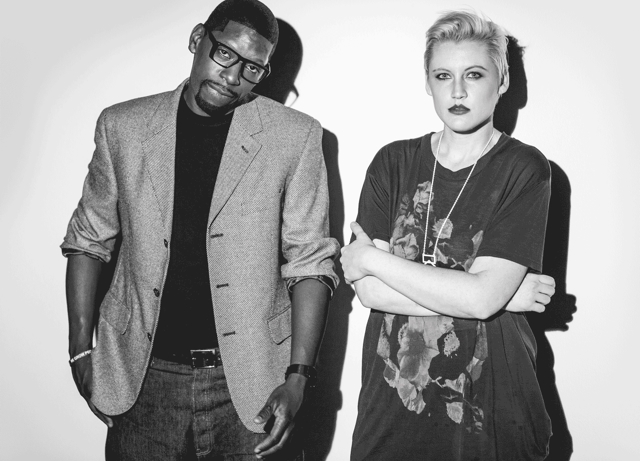 New Music From The Dividends, Pageantry, Ni Taylor and More.

The Dividends — “Rain.”
RIYL: Having all that power.
What else you should know: Along with that hot new Dividends track we dropped in this week's White Noise column, the duo of S1 and Sarah Jaffe also premiered a second track from its debut project yesterday, this one via Stereogum. That project, called the Far From Away Vol. 1 EP, earns its release today, and will be celebrated with a headlining performance at Trees tonight.

Cantina — “Hypnotic.”
RIYL: Pounding the skins.
What else you should know: John Dufilho's all-drummer supergroup premiered a second track from its debut album this week when “Hypnotic” first popped up on KUTX. As for these guys, their A Sea of Keys LP officially earns its release on July 22 via We Know Better Records.

Snowblood — “LoveSpell (Mystery Skulls Remix).”
RIYL: Scratching backs, having your back scratched in return.
What else you should know: After being featured on Mystery Skulls' “Hellbent” single, the ex-pat producer returns the favor, remixing Snowblood's debut single. You can stream the original version of the LA-based artist's tune — which Mystery Skulls also produced — here.

Pageantry — “Vicious Wishes.”
RIYL: Summer surprises.
What else you should know: On top of April's Influence LP — one of our favorites of the year so far — Denton's Pageantry already have another EP ready to release here in a couple weeks. The title track, “Vicious Wishes,” plays like the single The Smith Westerns never got around to releasing before their untimely demise. Eat your heart out, Whitney.

Tony Ferraro — “The Great Nice.”
RIYL: The subtle elegance of Scott Danbom's piano mastery.
What else you should know: Dentonite Tony Ferraro has been steadily releasing new music even after February's A Parrot Buys a Hotel LP — another of our 2016 favorites. This marks the third non-album single from Ferraro. Hey, that's enough for an EP, we'd say. Man, you Denton folk are productive.

Riverboat Gamblers — “Massive Fraud.”
RIYL: The specter of death.
What else you should know: Riverboat Gamblers releases its first new single since frontman Mike Weibe's SXSW injuries, where he collapsed his lung, among other things, after falling off a bar. On the B-side is a cover of The Dicks' “Hate the Police,” as well. Vice's Noisey blog talked to Weibe about all of these things, if you'd like to learn more.

Vik Filthy — Cold War Caviar.
RIYL: Blank canvases.
What else you should know: With the release of this beat tape, the transition of the artist and producer formerly known as Rob Viktum is now complete. So I guess all you rappers out there should update your contacts list.

Chokey — s/t.
RIYL: Rocking out with your S.O.
What else you should know: After releasing a three-song demo back in March, this bf/gf sludge duo featuring Parker Lawson from Two Knights and his ladyfriend Jade Wells are back with a proper debut EP containing four new tracks. Same vibes, more fidelity.

Ni Taylor — Politely Rude.
RIYL: Getting by with a little help from your friends.
What else you should know: Between the writing and producing credits and guest verses, Taylor's most recent LP boasts a whole slew of area hip-hop heavyweights — Spinderella, J. Rhodes, members of Erykah Badu's Cannabinoids backing outfit, -topic and Alsace Carcione, among others. Taylor's is another aggressive and confident female voice in the scene, something we've been mighty hashtag blessed with this year.

Club Meds — “Cat Drag Mother.”
RIYL: Being simultaneously loud and proud.
What else you should know: Since moving to San Francisco, Binary Sunrise's Kenneth Kemp has shifted his output of sometimes experimental post-punk/dance music in an unapologetically gay direction. His new band, Club Meds, just released its tongue-in-cheek Straight People EP, from which the spastic dance punk single above is taken. To paraphrase Mr. Kemp, it's not entirely a departure from his previous work, it just features a little added smeared lipstick to his old sneer.

Siberian Traps — Stray Dogs.
RIYL: Being from Fort Worth.
What else you should know: Historically, Fort Worth's been a city known for its country musics. More recently, though, if you had to identify a Fort Worth sound you'd have to point to the punky and sometimes lo-fi offerings from Dreamy Life Records or to the slew of acts turning to Jordan Richardson to put his trademark faux '80s spin on their chugging rock records. Partially recorded at Dreamy Life's Cloudland Recording Studio and mastered by Richardson, Siberian Traps finds a way to merge all three of these elements on a single record. You'd be hard-pressed to find a single Fort Worthian that won'd appreciate this record on some level.

Jonas Martin — “Wannabe.”
RIYL: The Spice Girls, but only ironically.
What else you should know: John Lennon Songwriting Contest winner Jonas Martin is back with the second single from his upcoming sophomore record, this one written as a tribute to his late father. Starting as more of a piano pop thing, the track adds more and more interesting psych elements while building towards its climax. We reckon that's partly the handiwork of producer Jason Burt (Color TV, Natural Anthem), who has been developing something of a trademark sound of his own.

Rei Clone — “Smallpox Champion.”
RIYL: Fugazi, but if they sounded a lot more like My Bloody Valentine.
What else you should know: Yesterday, Dangerous Minds posted a link to “Shoegazi,” the shoegaze tribute to Fugazi. It was put together by Brazilian label The Blog That Celebrates Itself Records, and features an appearance by some locals. Track 6 is none other than Denton's Rei Clone with their take on “Smallpox Champion.” That band's also working on a new EP that'll be out sometime in the next few months.

They Say the Wind Made Them Crazy — “Red Blood Green Grass.”
RIYL: Flying by the seat of your pants.
What else you should know: In regards to this track, experimental vocalist Sarah Ruth Alexander and experimental jazz guitarist Gregg Prickett told Verbicide Magazine, which premiered the thing, the following: “'Red Blood Green Grass' begins as a dedication to any living being who has died on the plains to be food and/or shelter for another being but grows to encompass the dichotomy of animals dying and so feeding one another as opposed to those beings who died from cultural conflict such as war. The simplistic version could be stated as animals dying and killing versus humans dying and killing and the collision in more recent times of these two spheres.” Completely improvised in the studio without any previous discussion or planning, the pair pretty accurately conveys that whole dying-animal thing, especially with Alexander's oh-so-chilling shrieks.

Jay Luse — “Vices and Contradictions.”
RIYL: Clawing back up from rock bottom.
What else you should know: Denton's Jay Luse follows up one of 2015's most underrated local albums with this single, which earned its release via Bluntiq. The track, he says, is intended to get folks hyped about his next projects, whatever those wind up being. But, hey, it works.