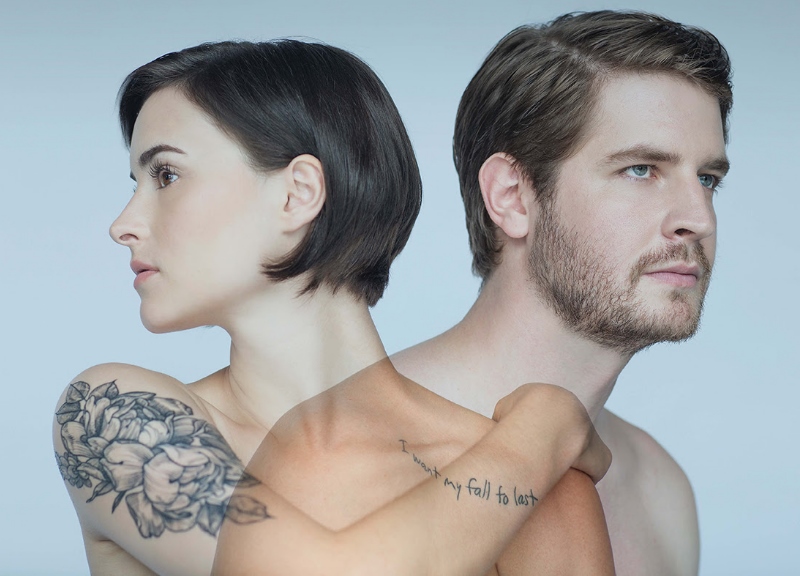 Tiger + Man — s/t EP.
RIYL: St. Vincent so much you’ve worn through the grooves on your Strange Mercy vinyl.
What else you should know: Like Sarah Jaffe before her, singer-songwriter Tiger Darrow has changed things up quite a bit since her acoustic guitar days. Her current project, a collaboration with film-scorer Andrew Orkin, blends the electronic and acoustic worlds rather seamlessly. For her part, Tiger sucks you in with her outstanding vocal abilities, waiting until you stop to really admire them to whack you with a burst of mangled, St. Vincent-like guitar lines.

Claire Morales & Gollay — “Suzanne.”
RIYL: Judy Collins, covers, songs about plutonic friendships.
What else you should know: Collaborations are totally Claire Morales’ bag, baby. In the past several months, she’s worked with fellow Dentonites like Sundae Crush’s Jena Pyle, Pearl Earl’s Ariel Hartley and Chinasky the Fury’s Dalton Kane on an old-timey covers project, on top of releasing a Halloween-themed album with Daniel Markham under the name Harmony in Hell. Here, she’s paired with Fort Worth’s Rachel Gollay — a pretty killer songwriter in her own right — to put a similarly dreamy spin on Leonard Cohen’s 1967 folk classic “Suzanne.”

Mega Ran — “DDT” (feat. Doug Funnie).
RIYL: The Golden Age of the WWF.
What else you should know: WrestleMania 32 is a little more than a week away. You should know this by now. Phoenix nerdcore rapper Mega Ran has been releasing one track a week from his wrestling-themed mixtape, Monday Night Ran leading up to the big day. The full thing will be online sometime next week, and feature songs named after Stone Cold Steve Austin, New Day and Macho Man Randy Savage. Here, local boy Doug Funnie gets in on the action, packing tons of ’80s wrestling references into his verse on “DDT,” an ode to Jake “the Snake” Roberts that’s even named after his patented finishing move.

Rat Rios — “Tungs.”
RIYL: Using lots and lots of hairspray.
What else you should know: Dripping with ’80s nostalgia and a lo-fi drum machine beat, Rat Rios keenly uses a few simple elements and a repeating four-note vibraphone line to make some low-key fire. Catch her opening for Young Fathers at The Loft on April 8.

Sarah Jaffe — “Did David Feel Like This?”
RIYL: Flipping cancer the bird.
What else you should know: Written and recorded with members of Midlake and Centro-matic, Sarah Jaffe’s offering up downloads of her David Bowie tribute anthem for free, with the caveat that she’d be ever so grateful if you donate some cash to the American Cancer Society. Text HOPE to 20222 to make a painless $5 donation. It’s just that easy.

White Denim — Stiff.
RIYL: Jam bands — until they start jamming for 10 minutes between choruses.
What else you should know: After finding that Leon Bridges kid, White Denim’s Austin Jenkins and Joshua Block decided to split. The rest of the band decided to keep things going and, well, they sound no worse for the wear, really. If you like old White Denim, you’ll like new White Denim. Hear front dude James Petralli talk all about the band’s recent changes with Texas Monthly here.

Andy Meadows — Modern Day Crooner.
RIYL: Jazz in cowboy hats.
What else you should know: Modern Day Crooner is quite the apt title for this release, as that’s really the only way to describe Arlington’s own Andy Meadows and his silky baritone pipes. The disc flirts a little more with jazz than even most Texas swing does, and at its most lounge singer-y, things can get a little cheeseball at times, but in the best possible way.

Kevin Aldridge & the Appraisers — “Faux Blaze.”
RIYL:
What else you should know: Between his work on the new Quaker City album and, now, this Kevin Aldridge release, producer Jordan “Son of Stan” Richardson has proved himself more than capable of handling genres outside the standard Wizard Vizion palate. This is the third of four singles Aldridge and his bandmates recorded with Richardson. They’re formally releasing the thing as part of a show at Magnolia Motor Lounge this Saturday.

Chokey — s/t.
RIYL: Rocking out with your S.O.
What else you should know: New Denton BF/GF doom metal duo Chokey features Parker Lawson from Two Knights and his ladyfriend Jade Wells. Listen to this EP loud as you can stand to. And don’t miss their male-led cover of the Dixie Chicks’ “Goodbye Earl,” a song we originally thought deserved to be covered by no band ever. Boy were we wrong about that.

The Lash Outs — State of Excess.
RIYL: New tuneage.
What else you should know: A couple weekends back, Three Links spent four nights celebrating its three-year anniversary. As part of that madness, Dallas pop-punk/power-pop outfit The Lash Outs held a release show for its latest full-length. Once again, the Descendents’ Stephen Egerton produced and mastered the thing, which is fun as all get out. This time around, singer Joey Holbrook also got rid of that terribly affected vocal thing that made the band’s earlier records harder to get into.

Acid Carousel — “American High”/”Elaine Benes.”
RIYL: Digging through dad’s record collection.
What else you should know: In case you’re not familiar, Acid Carousel is John Kuzmick and Gus Baldwin of Moon Waves. Aside from being a little more polished and mostly ditching the big distracting synth lines, the two projects don’t sound worlds apart. Like these two tracks? They also put out another EP not so long ago.

PVC Street Gang — Grasp Commandoz.
RIYL: Taking drugs.
What else you should know: Even lower in fidelity than their usual lo-fi approach to post-punk, PVC Street Gang’s latest pair of cuts feel a little more thrown together than we’re used to. Is that a drum machine in there? Damn, that’s like a 2009-era PVC move right there. Remember that song “Cutlass”? Man, that song was a monster jam. Anyway, hey, new PVC Street Gang!

Saint Clair — “Cookin'” (feat. TV & Epiffa).
RIYL: Doing the cooking dance.
What else you should know: Have you ever seen Polyphonic Spree/Okkervil River’s Michael St. Clair do his one-man band thing? He often plays out under the name Saint Clair. This is not that. In fact, this could not be any more different than that. This Saint Clair is more on that ultralight putting-gospel-in-your-hip-hop trip, at least for this song.