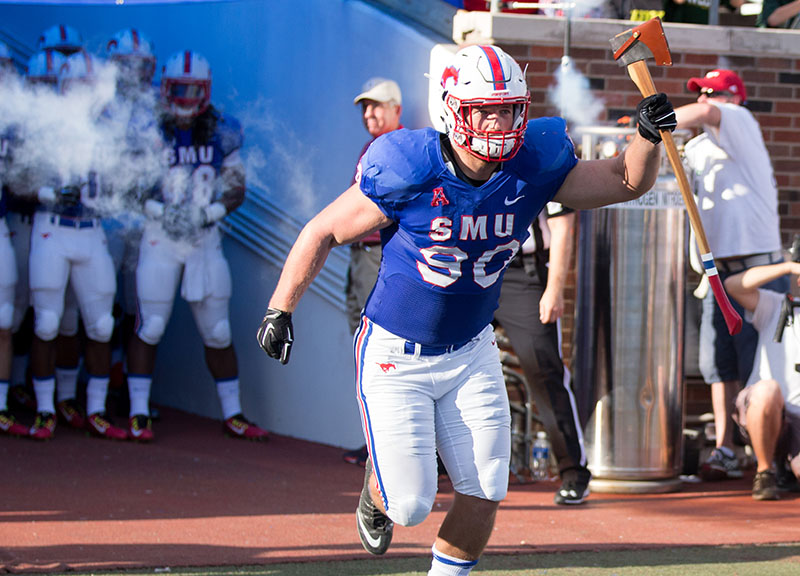 It wasn't much of a surprise to see the No. 4 Baylor Bears take the ball for their opening possession on Friday night, move it 75 yards on four plays and score a touchdown — and in just 50 seconds, no less. That much was kind of expected from a team that led the nation in points per game and yards per game in 2014.

The real surprise came on the next possession. First, freshman SMU running back Braeden West returned Baylor's ensuing kickoff 49 yards to the Bears' 46. Then junior quarterback Matt Davis connected with redshirt freshman wide receiver Courtland Sutton for a 46-yard bomb. And, just like that, the game was tied.

Almost no one saw that coming — not from a team that was considered to be the worst FBS team in the country in 2014, a squad that took a full 120 minutes to score a touchdown to start last season. In turn, the quick strike stood as a clear statement: The Chad Morris era at SMU has arrived, and it's worthy of your attention.

And it was satisfying. All off-season long, there was plenty of talk around The Hilltop about how much change the former Clemson offensive coordinator could really implement during his first season in Dallas. And while most believe it will take at least a couple seasons for Morris to get his Mustangs where he wants them — not unlike the transition that men's basketball coach Larry Brown undertook with his program — the quick score was at least a sign that the culture and confidence surrounding the Mustangs program is headed in the right direction.

Prior, few could've imagined that, for the full first half of Friday's home opener — in front of a sold-out crowd of 32,047 at Gerald Ford Stadium — the Mustangs could go toe-to-toe with the Bears and even put them on their heels.

“We knew it was going to be a dog fight,” said Baylor head coach Art Briles. “Can't show up and win. Coach Morris is about as well-schemed as any coach that you could have to open up with in a blind situation.”

Eventually, though, after a well-fought first half where the Mustangs only trailed 21-28, reality set in. The Bears put together a 28-0 second half and put the game away with a final score of 56-21.

Luckily for the Mustangs on the football field, it was the SMU fans out in the stands who bared the brunt of the criticism Friday night. On the field, there were actually a lot positives to build on, including the impressive play of quarterback Matt Davis, who finished the night 16 of 23 for 166 yards and two touchdowns while rushing for an additional 115 yards. His decision-making was suspect at times — especially at the end of the first half when he failed to manage the clock properly and leave enough time for the field goal unit to take the field. He threw some errant passes that led to two interceptions, too. But otherwise, Davis looked like a leader and player who can makes things happen when the pocket collapses. Redshirt freshman wide receiver Courtland Sutton, who stands 6'4″, too proved he'll be a tough matchup for cornerbacks this season. True freshman running back Xavier Jones also flashed some playmaker ability, scoring a rushing touchdown and leading the team in receptions.

After the game, though, Morris wasn't contented.

“Losing is something we're not going to get used to,” he said in his post-game press conference. “This is a totally different era. Moral victories don't do me a whole lot of good. We can win, and we're gonna win.”

Morris' next opportunity for his team's first win comes next Saturday against North Texas at Gerald J. Ford Stadium.

SMU defensive end Zach Wood (90) leads the Mustangs on to the field for their season opener against the No. 4 Baylor Bears. Wood finished the game with three tackles.

Baylor safety Terrell Burt (13) runs onto the the field at Gerald Ford Stadium to face the SMU Mustangs. Burt finished the game with three tackles.

Baylor quarterback Seth Russell (17) dives into the end zone for a touchdown in the first quarter against SMU. Russell threw for 376 yards and five touchdowns in addition to this rushing touchdown.

SMU running back Xavier Jones (10) breaks free from a Baylor defender. Jones carried the ball 13 times for 38 yards and a touchdown.

SMU’s home opener was a sell out with over 32,000 people in attendance.

SMU quarterback Matt Davis (4) confers with his coaching staff on the sideline during the first half. Davis accounted for 281 total yards of offense and two touchdowns in the loss to Baylor.

SMU running back Prescott Line (42) carries the ball in the first half against Baylor. Line finished the game with 9 carries for 24 yards.

SMU wide receiver Courtland Sutton (16) celebrates with running back Prescott Line after scoring his second touchdown of the game. Sutton led the team in receiving yards with 82.

Baylor safety Taion Sells (26) is congratulated by his teammates after an interception.

SMU wide receiver Courtland Sutton (16) can’t catch up to pass intended for him in the end zone against Baylor.

Baylor wide receiver Jay Lee (4) runs away from the SMU defense for a touchdown. Lee scored three touchdowns on three receptions against the Mustangs.

SMU head coach Chad Morris encourages his players as they come off the field. Morris made his SMU coaching debut against the Baylor Bears.

SMU wide receiver Ryheem Malone (13) catches a pass in the second half against Baylor.

Baylor wide receiver Corey Coleman (1) scores a touchdown in the second half against SMU.

Baylor quarterback Seth Russell (17) rushes down the sideline after scrambling out of the pocket. The play was called back after a holding penalty.

SMU head coach stands with his team after losing to Baylor 56-21. Morris and the Mustangs play North Texas Sept. 12. 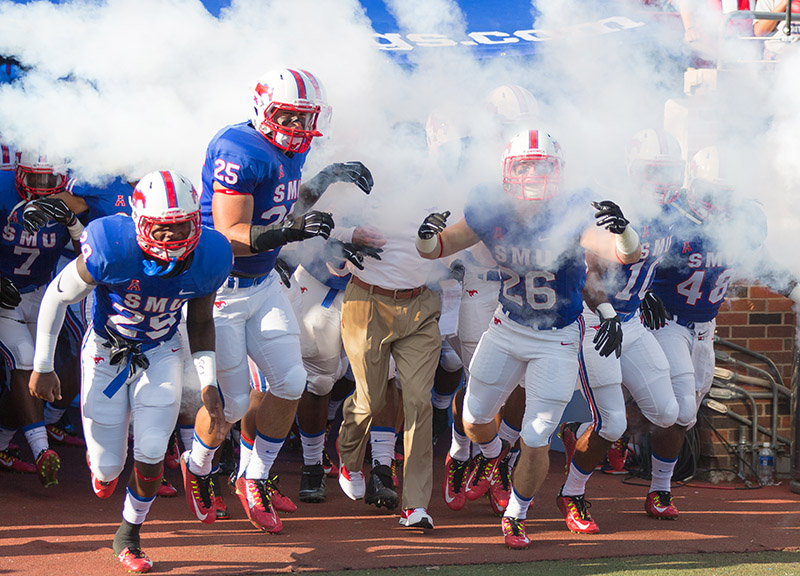 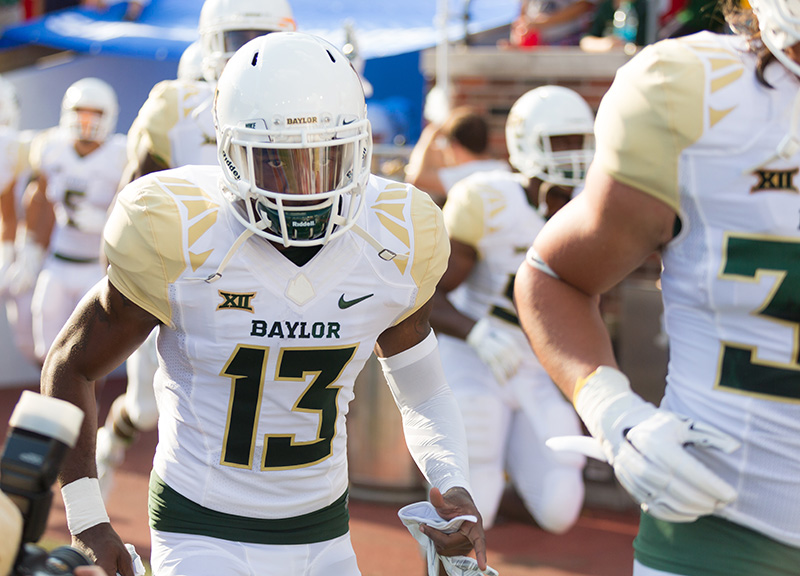 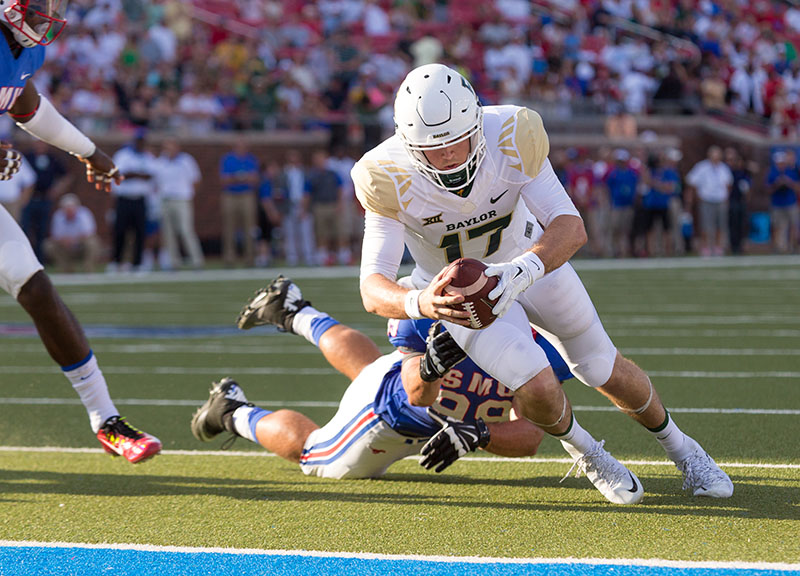 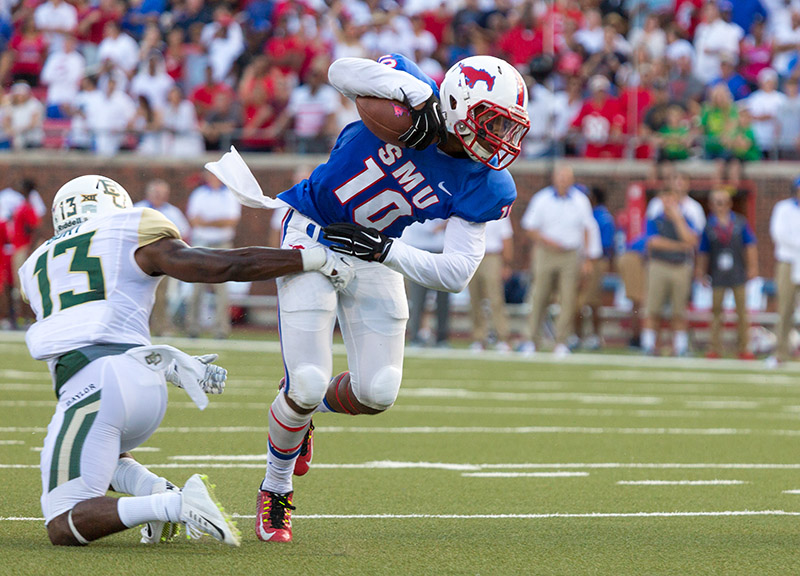 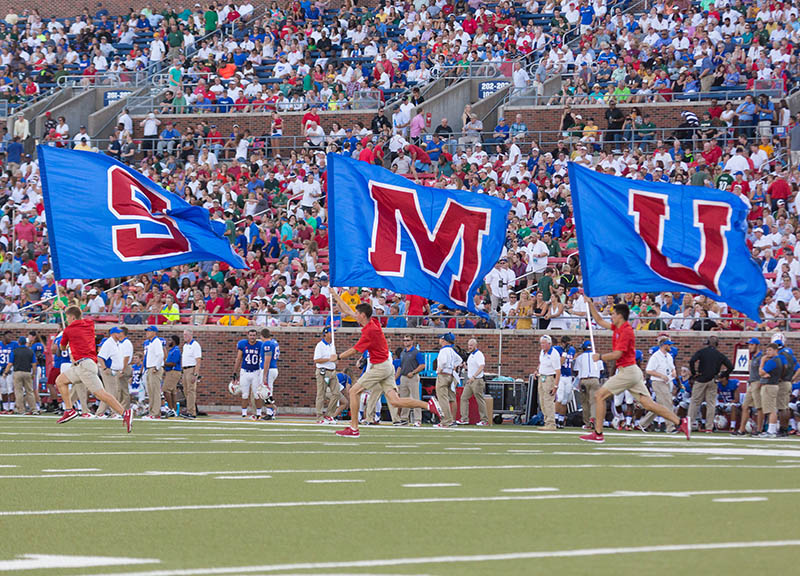 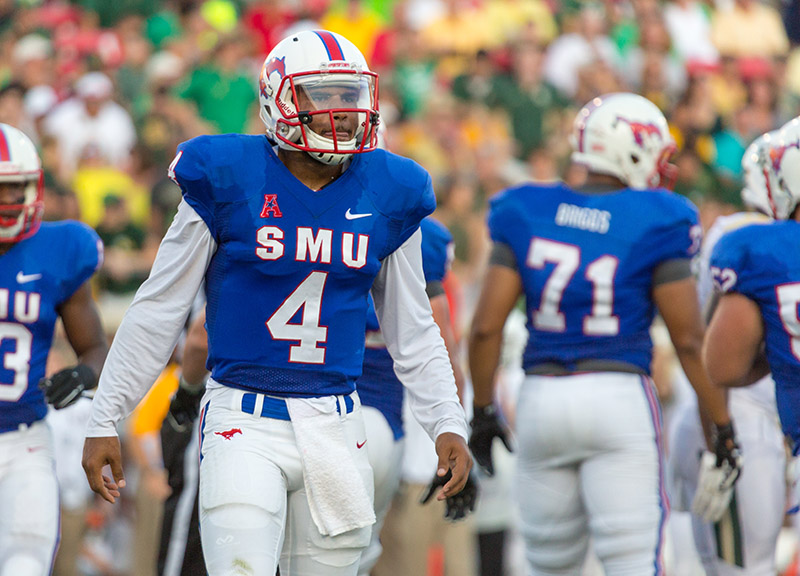 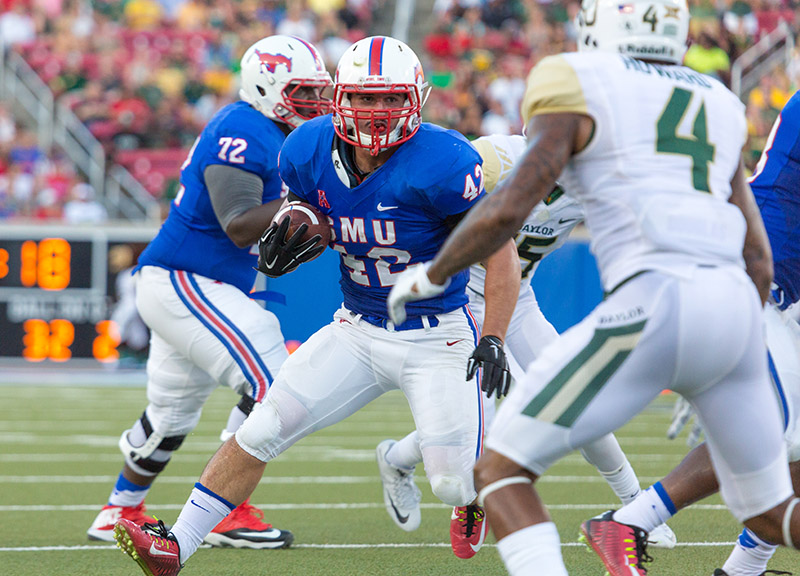 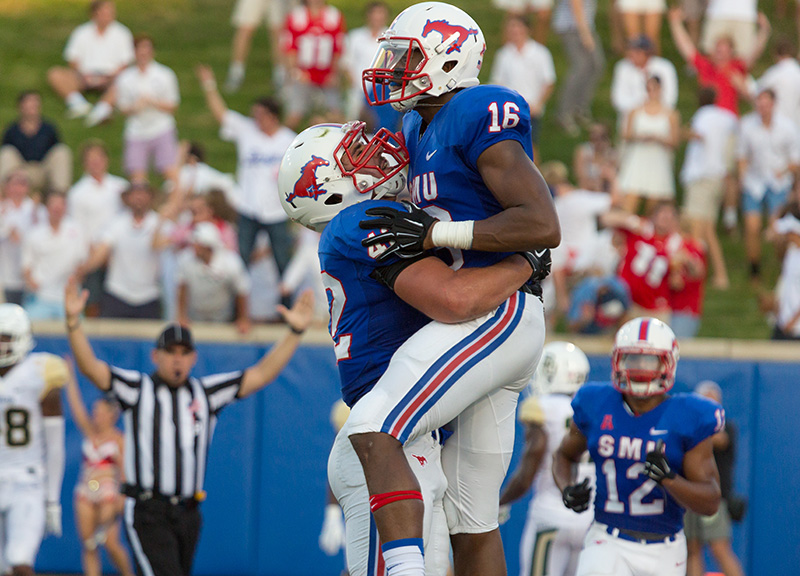 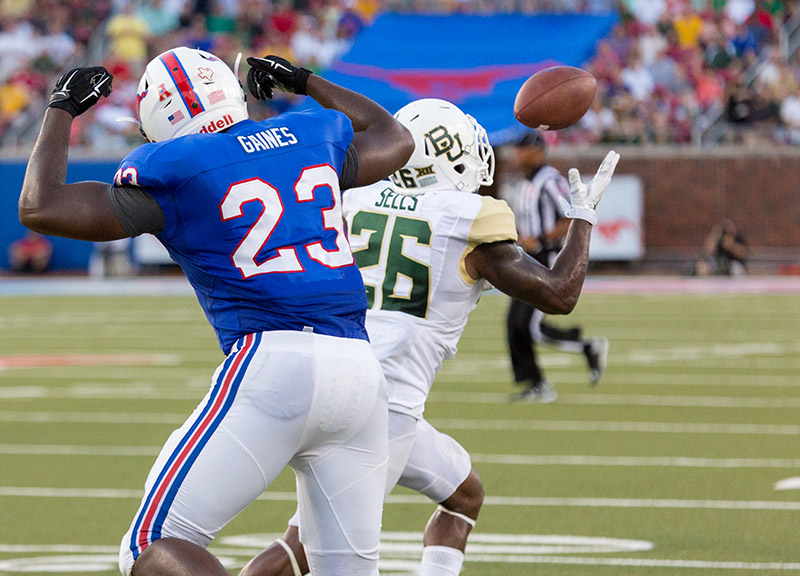 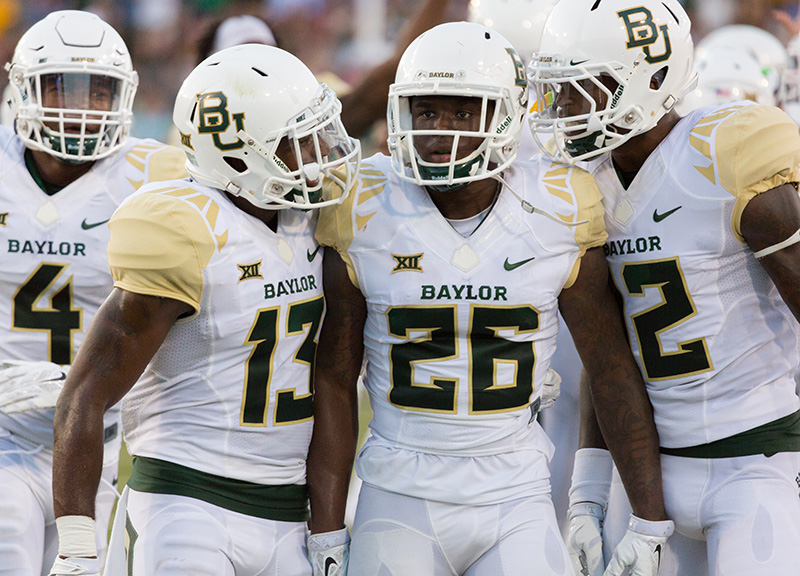 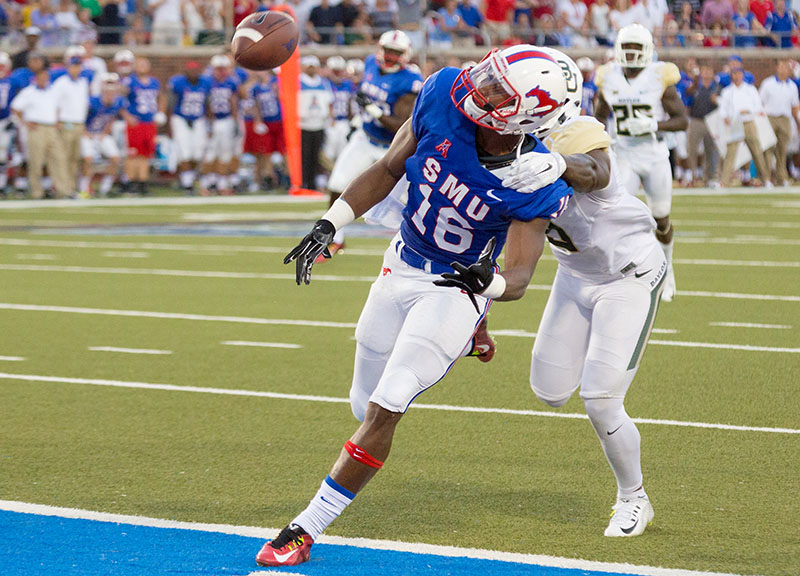 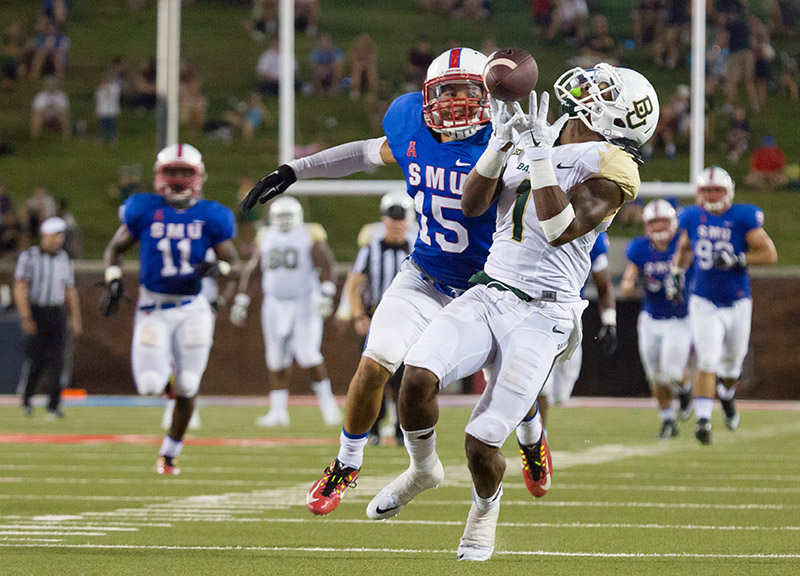 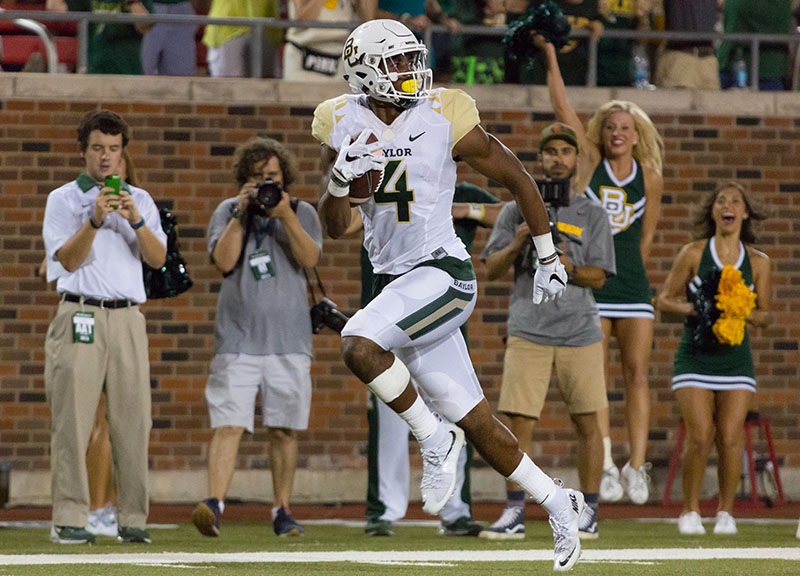 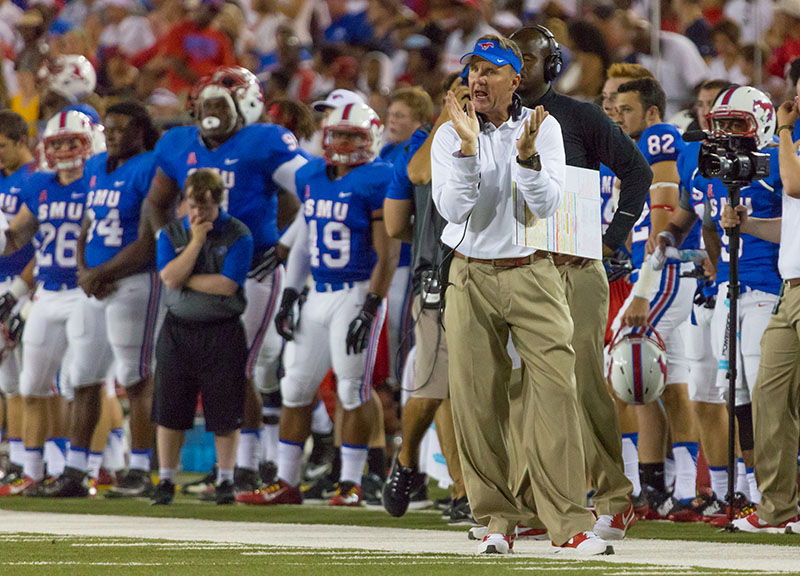 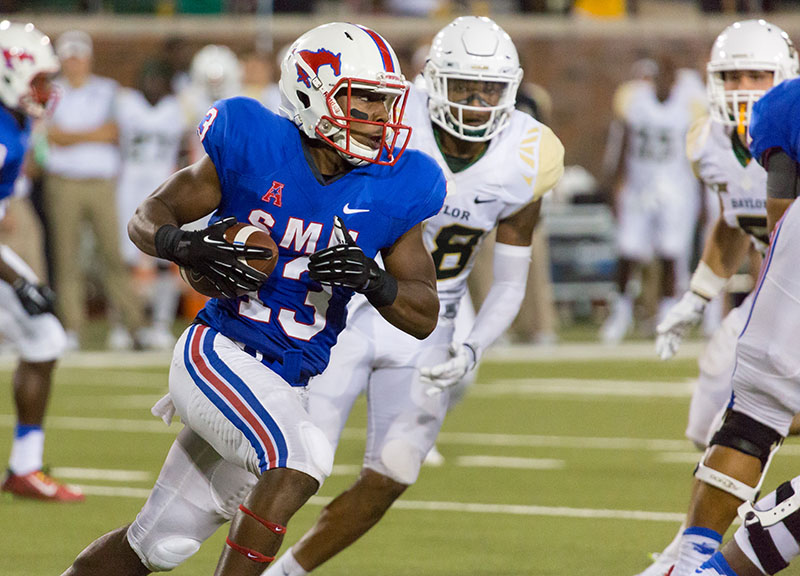 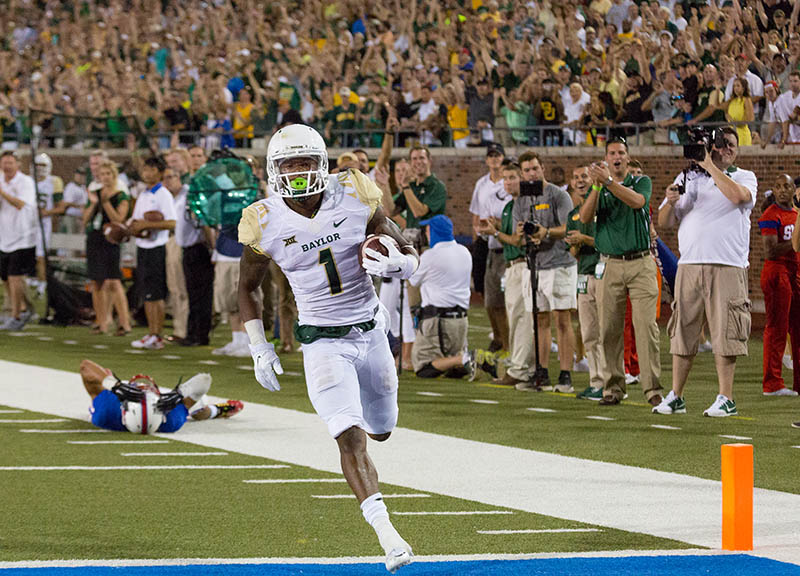 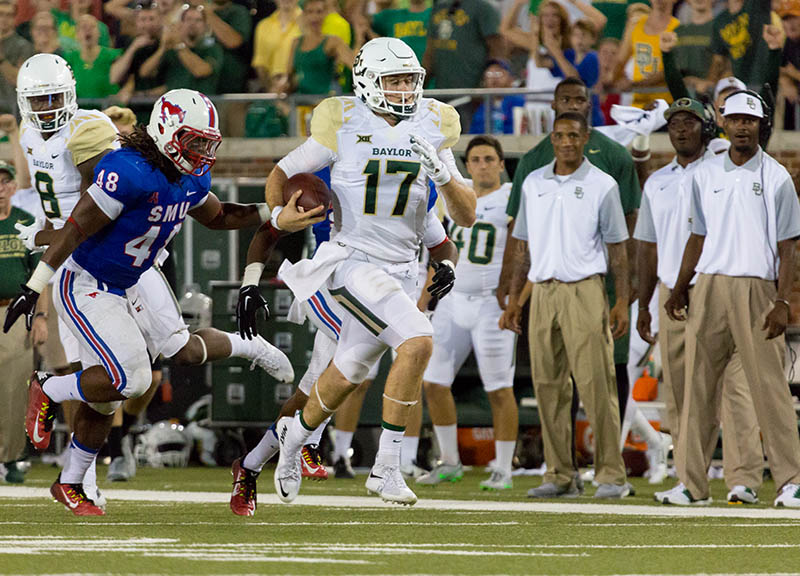 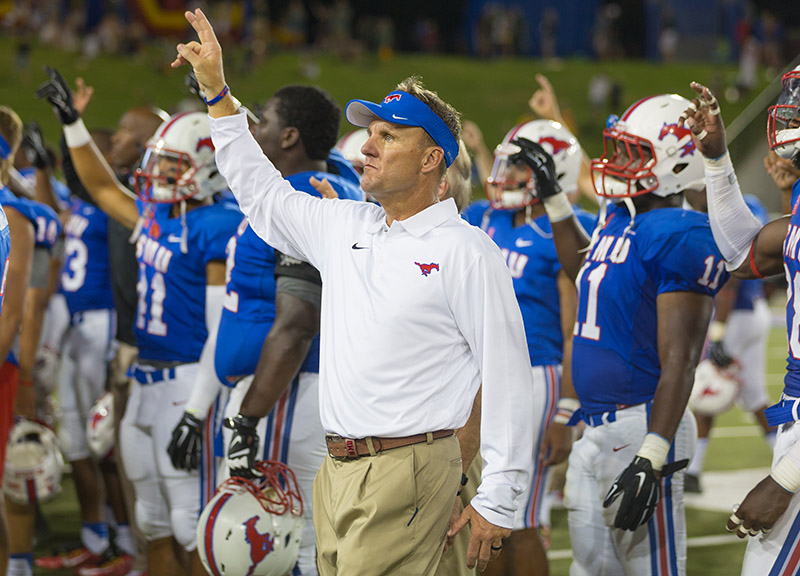