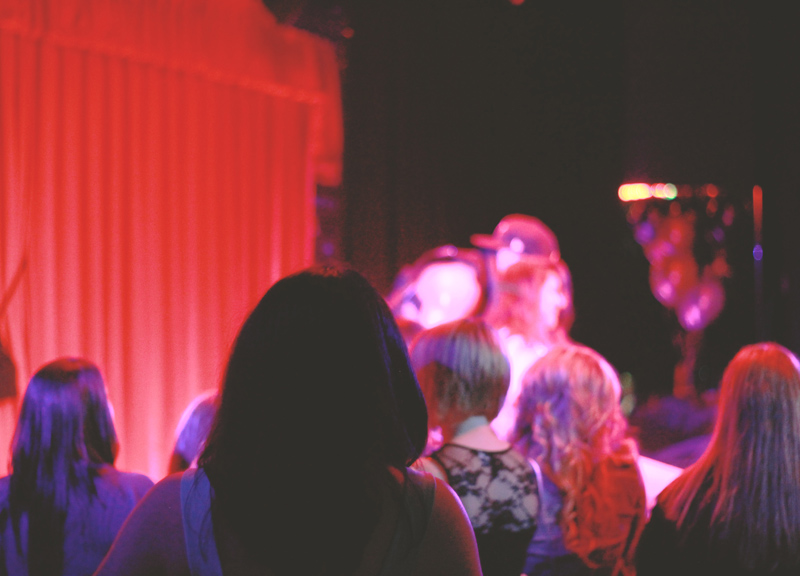 If ever there were a Mecca-like city for male stripping, Dallas is it and LaBare is the Ka'aba to which women 18 and up from all over the region journey for girls nights out, bachelorette and birthday parties or just for the regular old chance to throw some cash at ass-shaking, junk-jiggling, too-beautiful-to-be-true men.

That's no joke: LaBare is considered by many to be the premier club of its kind — a place well-deserving of the self-titled documentary releasing theatrically in Dallas days. And who better to direct such a film than Joe Manganiello, the sexy werewolf of the True Blood that you'll also know as delicious fireman named “Big Dick Richie” in Magic Mike.

With the help of his younger brother Nicholas, who co-produced the film, the pair acts as a fly on the wall in LaBare while shedding light on the life of the male strippers, digging deep into the loss of a LaBare brother and refuting the generally accepted stripper stereotypes.

And, this past Friday night, as Joe and Nicholas celebrated the new film's release at LaBare itself — yes, with plenty of glorious abs and godly asses everywhere — we got the chance to sit down and discuss the documentary with these first-time filmmakers.

Oh, and we also got them to answer the most important question in cinematic male-dancing history.

Joe, I know you’re not usually behind the camera, and that this is your first experience in doing so. Which position do you prefer: Being in front of the camera or behind?
Joe: I prefer freedom. And there's nothing that provides more freedom than being a director and a financier. On an artistic and financial level, you're gonna win most votes. But, with that said, I think what I really enjoy is the freedoms that my acting career has provided in terms of this film — which was to steal my brother away from the independent film company he was working for, to be able to bring his talents over to our company, to get to work with him every day on something that we thought was interesting, and to then have the personal, financial backing to be able to take a gamble because I believed in him and I believed in us. So I enjoy it all for different reasons.

I was really impressed about you wanting to bring some kind of integrity to what was going on with the dancers, to give them the opportunity to show who they really were — hard-working young men. Was that something you learned in the experience, that “Hey, these aren't the guys that I thought they were either!” realiztion?
Joe: Yes, but I think in terms of wanting to bring integrity, that wasn't necessarily our goal. Our goal was to present this world to the public as is. Y'know, as a fly on the wall. We didn't cast this, we didn't write this, and we didn't really have an opinion going into this. In fact, the expectation level that we had was, if we get, Jersey Shore, we’re lucky. We kind of thought along those lines. The guys being who they were is the reason that the film is about what great guys they are. We can't make that film if they're not those guys, and there were a lot of people who kind of said, “What about this in the movie?” and “What about that?” and “How come they're not like this?” It's, like, well we didn't cast it. We didn't pick these guys. They are who they are, and we documented that. I think if we would have filmed this at a different club — maybe somewhere in Vegas, maybe somewhere in LA, we wouldn't have had the integrity level that we had at this club. I think you have to attribute that to the ownership, from the top down. Alex came in and cleaned it up, he cleaned it out of all those guys from the '80s and '90s who were causing mayhem. From what I have heard, he really turned it into a business and made it about the show, brought in choreographers and really made it this really one-of-a-kind place for male entertainment.
Nicholas: Absolutely. It really helps that we went in without a plan, really. We didn't have expectations. We were thinking we were just going to put something together for a reel to make a television show. That was our initial intention. The cards were laid out in front of us that told the story — we realized this very quickly, so I think it was to our advantage that we didn't have a plan going in. We didn't really know anything in advance to a certain extent. Joe had been doing some research about it in the '90s, and some people that actually were still around…
Joe: I learned a lot from Magic Mike about what was going to be interesting to an audience about this world, and the conversations to be had about men and women and how they're different, and what these guys know about women that the average guy doesn't know. Getting the female stripper to talk about the difference between their job and the male's job — it’s just so different and it tells us it's almost like a quantum-physical level, male and female neurology and biology and how we're different, and how we think we have all this control but we really don't because. y'know, girls like this and guys like that. I think that's really interesting and timely in today's world.

What was your favorite part of shooting the documentary?
Joe: There are so many profound moments that are so simply put and so eloquently put — the one that I love is the one at the end that everyone in the crowd laughs when we ask, “Does this job ever get old?,” and the guy says, “Does it ever get old? Nah, it never gets old. The only 401K we got is pussy.” It's how outrageous that statement is. And then you go, “Oh, that's right.”

I'm sure it took a lot of courage for the dancers to open up about the lifestyle and the whole club scene. How did you manage to get them to be comfortable enough to show it all on screen?
Joe: Well, there were a couple things. I started working in bars and clubs when I was 16, so I'm very familiar with that world, and I understand that world, and I understand the pitfalls, and I understand the language. Aside from that, I got street cred — I was “Big Dick Richie” in Magic Mike! There was a big, giant poster of Magic Mike in the club and I pointed at that and said “It’s me. I'm the fireman.” And they all looked back and forth and did kind of a double take, and went “Oh.” And all of a sudden, everybody wanted to be in the documentary. We still had to gain their trust because we weren't just getting them to open up about club life and their jobs, we were getting them to open up about the loss of a brother, a family member, a best friend, the greatest of all time, who had been murdered without justice or punishment a few weeks before we got there. That was the real trick — earning the respect level that then allowed them to trust that we were not going to make them look bad and that our intention was to have their story, their voice be heard where justice wasn't done. I think there was a real need for healing that happened, a catharsis that was happening as we were interviewing the guys and some of them were opening up for really the first time since they gave the police report, or as a witness to the murder that went unpunished, and I think that was what took us until the eleventh hour to get.
Nicholas: Joe and I as filmmakers and as people, we always have people's best interests at heart. We're never going to take advantage of somebody.
Joe: It's easy to say that and not mean it, but we were willing to hang in there and earn that trust.

Nicholas: Genuinely. And they too were very conscious of the possibility of us going at a different angle than we did, and the concern of that. But, at the same time, I think they all knew the opportunity that they were all apart of, and we were just the first ones to step to the plate and tell the story. There were multiple side conversations I had with ownership, people that were close to them, saying you need to take care of these boys, you need to do what's right for these kids — they don’t know Hollywood. We knew that already, but it's nice to know that people within the organization — their bosses and ownership — were looking out for them as well.
Joe: I think we're used to lowest common denominator entertainment in a lot of ways. And I think that there are these quote-unquote reality shows that are scripted, that are cast [is part of that]. We made the initial rounds taking the show around, taking the footage around as a TV show, [and] we would get producers and production companies asking, “Well, can you get them to fight with each other?,” and I go, “Well, I don't want to do that because then we're tampering,” and then they go, “Well, can you make them be gay? Or can we put some gay guys in?” Well, they're not! I don't know what you want us to do. We didn't cast this, it's interesting enough. That’s what’s interesting to me, and I think there is such a lack of integrity — an accepted lack of integrity — in the terms of reality and documentary.

Nicholas: People just think you have to tick boxes — that there are just boxes that you need to tick in order for this to be successful, or for it to fit into the model that we think works. And we feel very differently.
Joe: What’s interesting about that: It's, like, I don’t want to see that. I don't care about that.
Nicholas: [Our film] is very unique. It's just so pure in what it is. We didn't do anything. We didn't tamper it. And it's just beautiful. It's amazing.
Joe: If you can't tell a story with the footage that you're getting as a producer, as a director, you shouldn't be in the business. That's the whole exercise, is figuring out how to tell a story out of a cloud, out of this footage, and to have something clear and coherent. That's the challenge.

OK, serious question. If you had choose, who's your hire at Chippendale: Farley or Swayze?
Joe: That’s tough for me. Adrian [Swayze] definitely has the better body, but Barney [Farley] was just the showman.
Nicholas: That’s funny. Amateur Night really reminded us in the film of that sketch. We actually talked about that together — like, “Oh my god, this is actually happening in real life.”

Joe: Randy at the end going, “OK, now. Chaz is hired. But Troy: Keep workin’ on your physique — we're gonna keep you dieting — you have great charisma.”
Nicholas: It's like, “Oh my god, it's happening!” I love Farley. And it's so sad that both of them are gone. But I think that Farley was just amazing.
Joe: Swayze was the man, too! You got Roadhouse. You got Point Break. I'm gonna have to go with Swayze.

Cover photo courtesy of La Bare. All other photos by Ashley Gongora. La Bare starts screening at the Angelika on Friday. 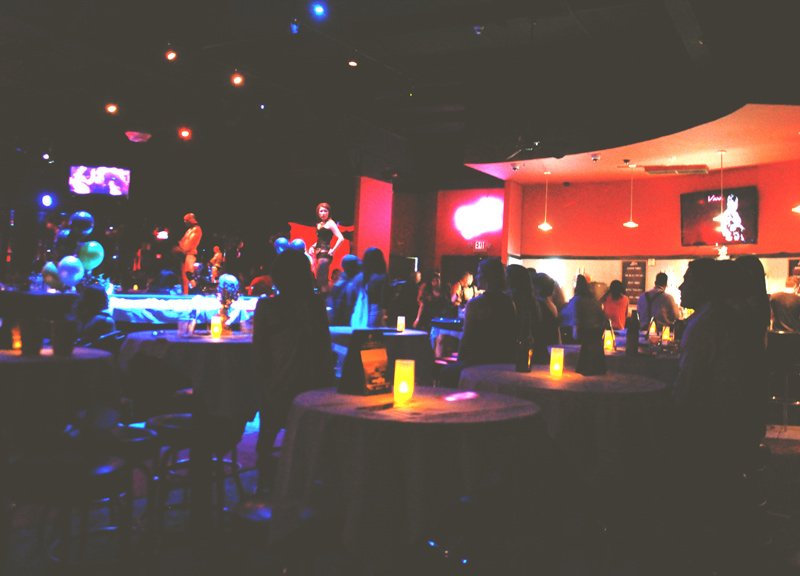 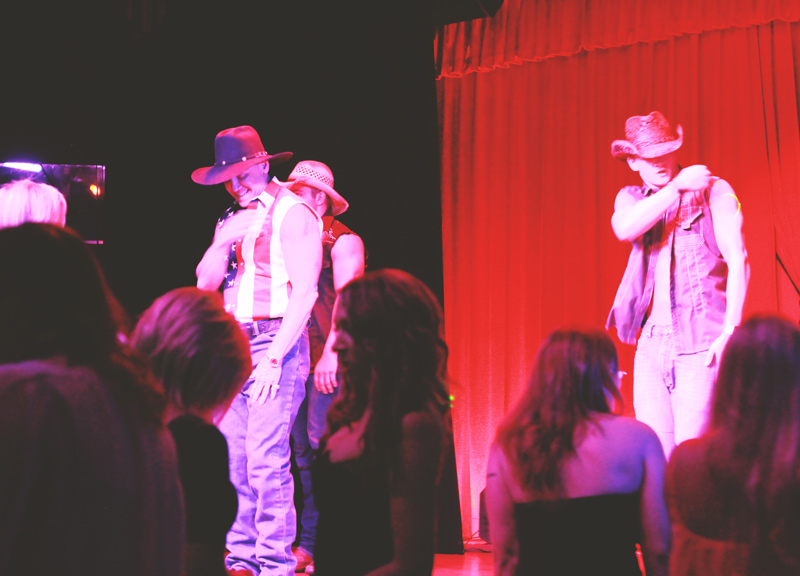 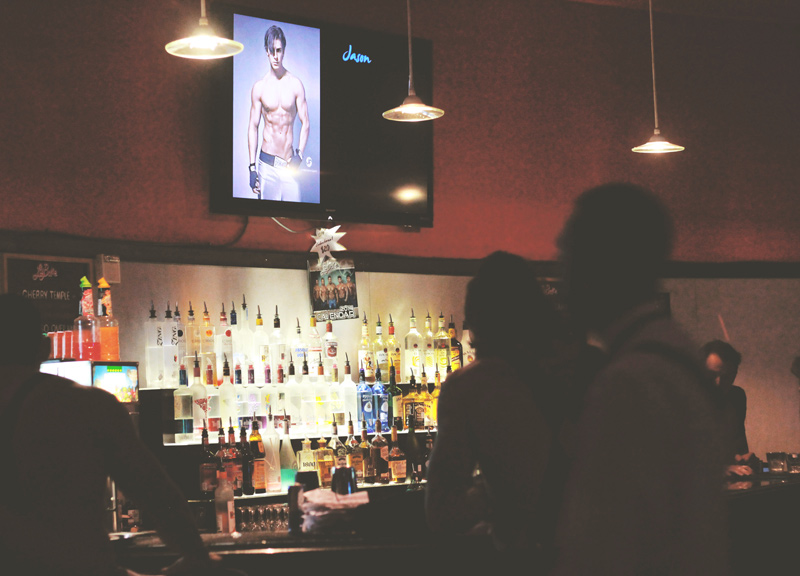 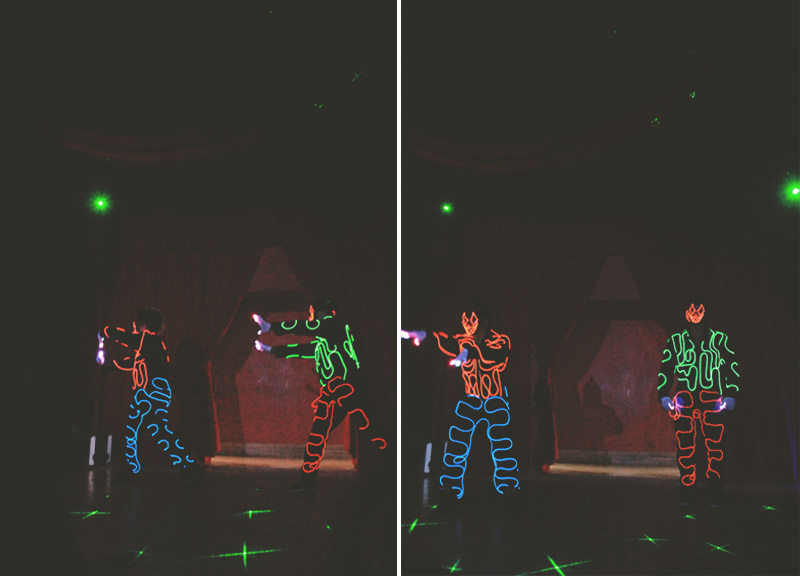 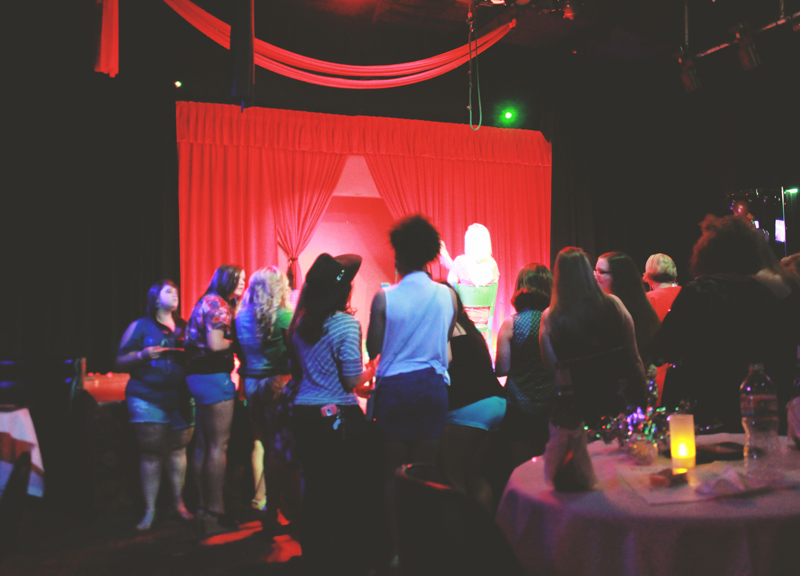 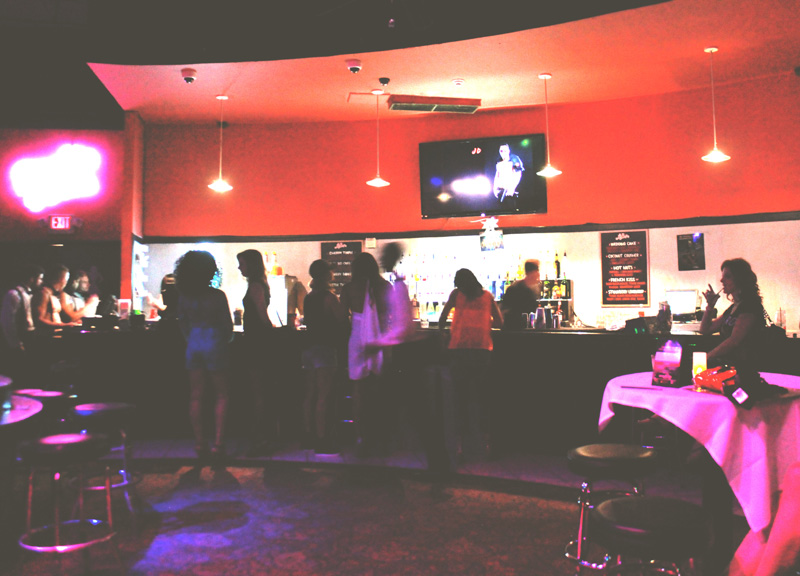 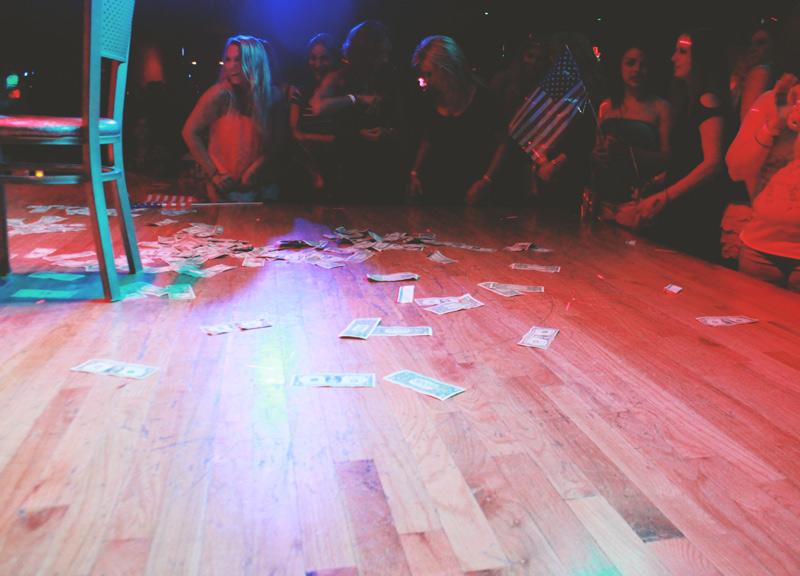 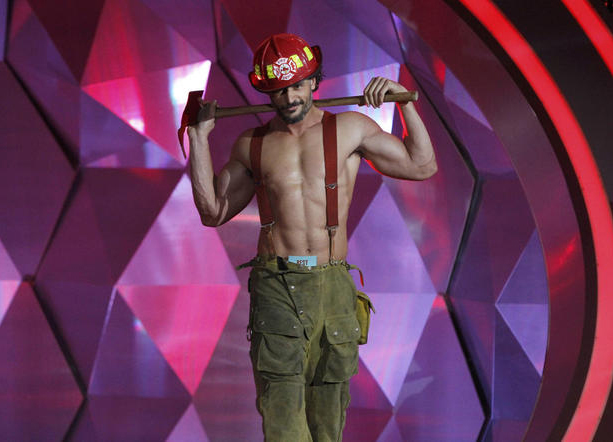