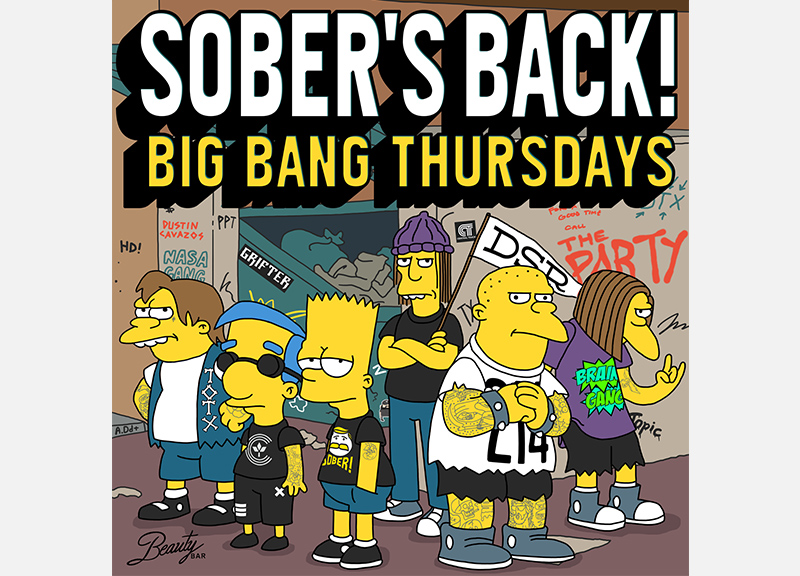 After A Year And A Half Away, DJ Sober Returns His Big Bang! Bash To Its Original Beauty Bar Home.

Seems wheels of the Dallas DJ residency turntable are spinning again: A year and a half after packing up his Big Bang! residency at Beauty Bar and taking it across the Central Expressway and into the basement of The Travis, DJ Sober is now switching things up again, bringing Big Bang! back to its original Beauty Bar home starting this Thursday.

If the news comes as a surprise, well, that's because it was kind of meant to be: Though his decision to move Big Bang! back to Beauty Bar was made a few weeks back, Sober chose not to announce that last week's basement bash would be his last, instead deciding to simply mention it after the fact with an announcement posted to Facebook last night.

For Sober, the move is mostly meant as a change of pace.

“When I first moved, it was needed,” says the DJ born Will Rhoten. “I needed to switch things up — and I did. And we made something there. Now, really, I just wanna freshen things up again and throw a curveball.”

This move is certainly that, but it's also one we've seen before. Big Bang! was one of Beauty Bar's original recurring events when the spot opened in 2010, and the weekly spent two and a half years in that home — something that neither Sober, nor his crowd, have ever forgotten.

“I've gotten a lot of feedback from people throughout my time at the Travis that they just really missed Beauty Bar,” Sober says. “And, frankly, I missed it, too. There were some really cool vibes there. It's just a little bit of a different vibe. I just really like Beauty Bar in the holidays especially. Maybe that's corny, but it always feels like a house party.”

That's in part, Sober says, to the fact that Beauty Bar is more of a neighborhood spot than the more destination-feeling Travis. But it's more than that, too.

“The vibe at Beauty Bar just reflects what people are open to,” Sober says. “It's people from all different walks of life. I just feel like, with the music, it's more palatable. I can play a different set there, incorporate a lot of the same things, but still offer more of a mixture.”

Sober still anticipates his nights being as hip-hop-heavy as ever, but he says he hopes Big Bang!'s return could signal more sonic freedom for his sets, too, because, as he puts it, with all of its more dance-oriented nights, “hip-hop's kind of a rarity at Beauty Bar.”

For its part, the Travis is taking the high road in response to the news of Sober's departure.

“We've worked with Sober for a long time,” says Matthew Giese, one of The Travis' operating partners, when reached by phone this afternoon. “We appreciate what he does for Dallas. He brings something that no other DJ or club in town can offer — a healthy and vibrant diversity built upon the music.”

Currently, the Travis has no formal plans to replace Sober in its Thursday night slots, although Giese does say that the spot will remain open, likely with rotating DJs. He says he's yet to determine if that means both the upstairs and downstairs portions of his rooms will remain open throughout this changeover period, however.

Of course, Sober says he welcomes the change.

“The whole thing's just kind of rejuvenated me,” he says. “The same feelings I was feeling when I left Beauty Bar the first time, I'm feeling again.”

Nostalgia: One hell of a drug.