Back On One’s Pledge. 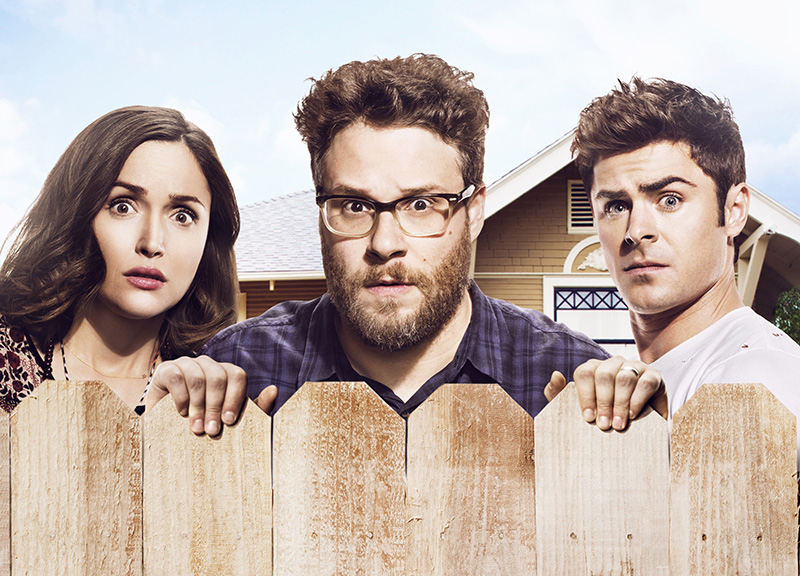 The Hyper-Topical Neighbors 2 Proves That Comedy Sequels Don’t Have To Suck.

Sequels to successful R-rated comedies are tricky. Typically the first film gives us great jokes and a fun story, and then the sequel tries to recreate the exact same jokes with the exact same plot. It’s not all that surprising that this formula often falls flat.

But Neighbors 2: Sorority Rising is the rare exception — an effort that matches, and might even exceed, the comedy of its predecessor, even with an almost identical plot.

It’s been a couple years since Mac (Rogen) and Kelly (Byrne) defeated the frat living next door. Now, they’re now ready to move on from their starter home. With their house in escrow for 30 days, their goal is simple: Keep the rowdy new sorority that’s moved in next door into the old, once-pesky fraternity house from ruining this deal. This time, they have some help in the form of their old rival, the still-fratty Teddy (Efron), who is still searching for direction in his life after college and whose initial efforts to help the sorority find its footing were rebuffed by Shelby (Moretz) and her sisters.

One aspect in which this film is far superior than the first — and don’t get me wrong, the first film is really funny — is in how it explores a lot of deeper themes. Mac and Kelly are about to have their second child, they need a bigger home to accommodate their growing family, they seem equally as nervous this time around (even though they’ve already had one) and they’re not even quite sure if they understand what escrow means. Teddy, on the other hand, is suffering from a quarter-life crisis; he has no direction for his future, wants college to last forever, and can’t even properly boil a pot of water.

A smart move by the writers was letting the jokes and themes of the sequel grow up like its characters. It would’ve been easy to reuse the same jokes and keep the characters exactly like they were in the first film; but, as the returning ensemble goes, they’ve all matured — well, at least sort of. Even though this film reuses some of its old jokes, it puts fresh takes on them. Yes, the funny airbag bit makes a reappearance, only it’s somehow funnier this time around.

The four leads — Rogen, Byrne, Efron and Moretz — are all fantastic. So, too, are the rest of the returning players, of which there are a ton. There are some great cameos, too. But can we talk for a second about how great an actress Byrne is, in particular? She doesn’t get enough credit at all. She’s played distinct and memorable characters in all of her comedic roles, and though she gets overshadowed by “bigger” actors in headlines, she always matches her peers — male or female — punch for punch.

To that end, the film, true to its marketing, does very much promote an equal gender playing field. Shelby and her sisters are all about girl power and not being stereotypical sorority girls. Some of it is inspiring, and some is cheesy. There are other topical notes, too: There’s a Cosby joke, and a very intentionally satirical and funny scene about police brutality that almost steals the movie. Time will tell if this will give the film a dated feel down the road, but for now it’s hilarious.

And that’s the ultimate pull here. Parts of the story makes no sense and others are simply there to push things along, as is often par for course in comedies. Looking for something new and innovative? Keep moving, you won’t find it here.

But, as sequels go, Neighbors 2 is a real winner. It not only lives up to the original, but in some ways, it surpasses it. The jokes are legitimately funny, the cast is at the top of its game, and the characters feel much more relatable and grown up this time around.