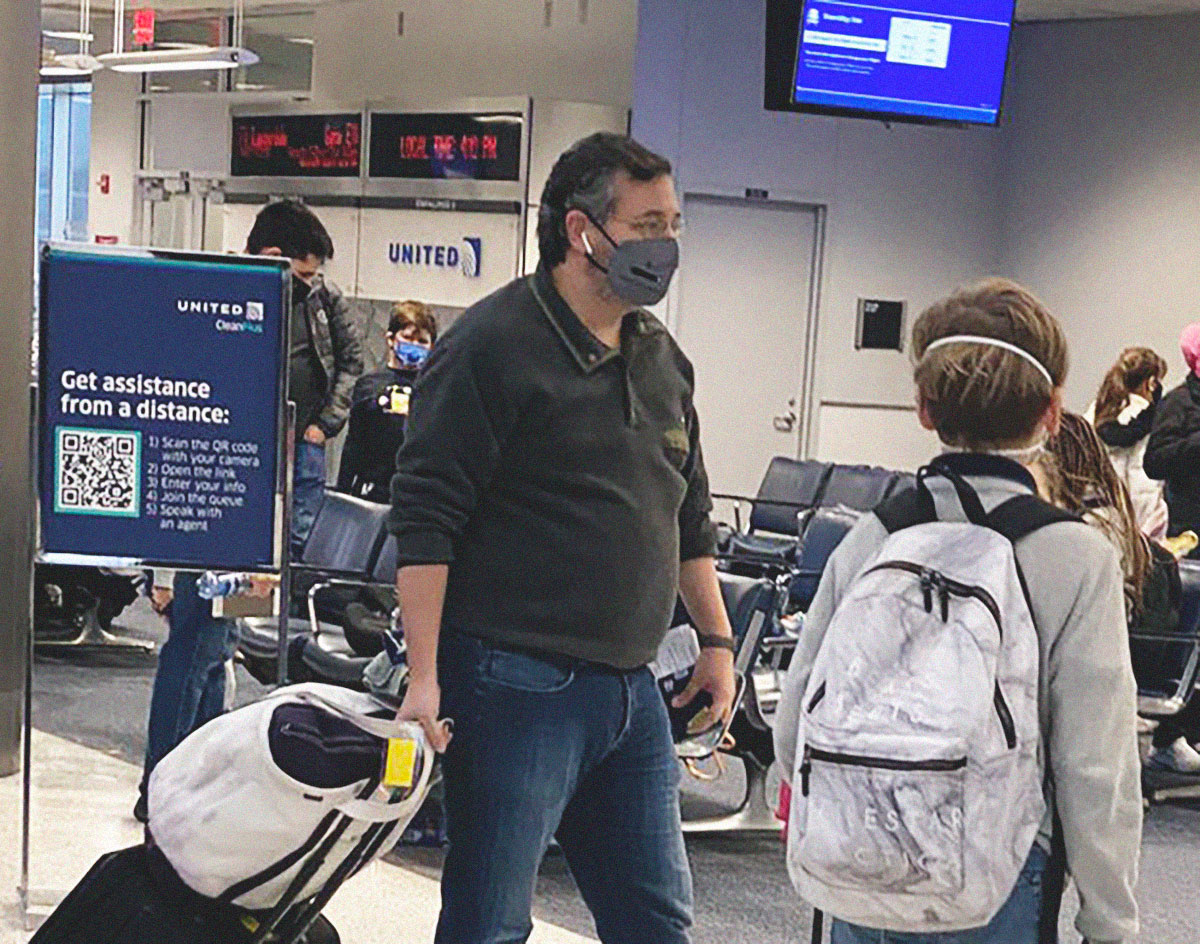 This Clown Really Took A Vacation To Cancun For A Little Fun In The Sun While The Residents Of The State He Supposedly Represents Are Freezing To Death.

You, sir, are more than just another Asshat of the Week. No, that distinction doesn’t really do you justice.

Instead, please consider yourself a lifetime member of The Asshat Club. It’s really insane how many things you’ve done that qualify you for this membership. And yet, somehow, you always still find ways to outdo yourself.

On Wednesday night, during the coldest winter storm your home state has faced since 1949, when millions across the state are out of power and freezing in their homes because of our state’s complete mismanagement of our power grid, sharp-eyed Twitter users caught you at Houston Intercontinental getting on a flight to Cancun.

Let’s say that one more time: WITH EVERYTHING GOING ON, YOU FLEW TO FUCKING CANCUN.

Seriously, Ted: After 2020, I thought there were no surprises left. After you attacked our democracy and helped fuel an insurrection — and then voted to acquit the man most responsible for it — I genuinely did not think you could sink lower.

For once, I actually thought there might be a limit to your depravity, to the outright indifference you so consistently have toward the plight of so many people — situations you have had no small part in causing.

It’s honestly impressive, Ted. Your old tweets attacking California for their blackouts were honestly so spot on. Alas, if you’re gonna talk shit, Ted, you have to be able to back it up. And, as we all know, our standalone power grid here in Texas certainly had no back up this week.

Sure, it’s hard at this point to tell exactly whose fault it is. But it’s kind of everyone in leadership roles’ bad here, no? Every official in this state from the top down has failed it citizens in every aspect this week. The Railroad Commission, whose job it is to make sure oil and gas flow freely into the state, clearly can’t accomplish that goal. Our fearless governor took time from his busy schedule of doing nothing to go on Fox News and rail against green energy (which was not the cause of all our misery, thank you). Our lieutenant governor, meanwhile, seems was more preoccupied with writing an obituary for the late goblin Rush Limbaugh than helping the living — but that’s just par for course for him, too.

It all makes us wonder, Ted: Who in the Texas leadership even gives a shit about the people of Texas?

Can we explain to you how friendships work, Ted? For example, if someone is moving into a new apartment, they might call on one of their friends to help them move — and, in exchange, you might buy them pizza and gas. Pretty simple, right?

So, in your case, how does your friendship with oil and gas work? Really, tells us: Do they pay you in exchange for fucking over the people you purport to represent? We already know you sold out our pandemic relief to line their pockets, so is the next play that we all now have to freeze to death? Honestly, how can you be so close to the oil and gas industry — and yet, when we need them, the best you can do is put up a shrugging emoji on Twitter?

A blizzard strikes Texas & our state shuts down. Not good.

Which brings us up to the issue at hand, the point we started with here. In the middle of all this, you chose to fly to Cancun.

Nobody buys your excuse that you were just trying to be a good dad by flying to fucking Mexico, Ted. Did you not want to see the plans you already made go to waste? Well, boo-fucking-hoo. A lot of plans made in advance of this storm were unable to be followed through upon this week, Ted.

Do you really not have an intern who took a media class, who could’ve told you that this might not make for the best optics? And if you don’t think the optics were bad, let’s ask this: Why did you rush to come back to Texas and get on a plane this morning? Answer us that.

Do you even understand why we’re so frustrated here?

The hardest part of this reality we came to know through the pandemic, and now this winter crisis, is just how little you and everyone else in power gives a shit about actual people.

Now we’re watching on in horror and seeing you completely dropping the façade of even pretending to care. What were you thinking? You can’t even use the excuse of being a dumbass Ted. You’re not stupid. Tommy Tuberville is an idiot; you’re just willfully malicious, power hungry and sleazy. You’ve continuously sold out the people in your home state in the name of personal gain, time and time again.

Texans hate you. The people in the Senate hate you.

What is all this for? If you’re not going to help, then just explain that to us.

And, while you’re at it, get a haircut. You look like shit.

Cody Farmer and the rest of the Central Track staff