Asshats of the Week. 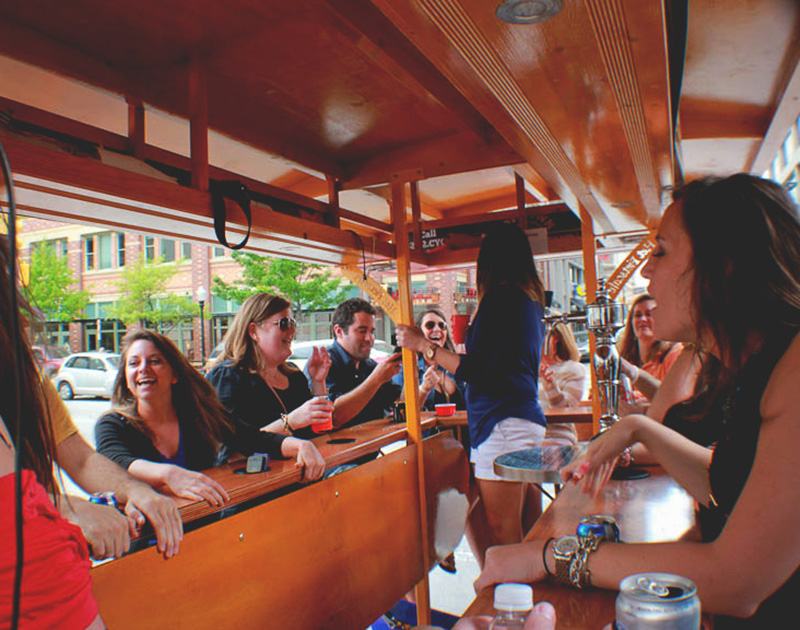 It’s Time To Pedal Out Of Dodge, You Traffic-Clogging Booze Bikers.

Dear Privileged Party People and The Bike You Rode In On,

Other than seeing a freshly smushed animal carcass, there’s probably no other eyesore on the road that makes me cringe more than the sight of a party bike clogging up traffic in the most obnoxious ways imaginable. I’m not quite sure if it’s because of their physical ugliness or the straight up awfulness of the clientele they attract — so let’s dive into both, shall we?!

First of all, how are these even a thing? Judging from exterior of these monstrosities, it looks like some lazy carpenter started to build a trolley, but a sixer-and-a-half of Miller Lite later, said “fuck it” and just decided to birth the abomination we’ve all come to know and loathe. Sure, thought ol’ drunky, physical exertion and heavy drinking in traffic sounds like a great idea!

The idea here is for passengers to pedal along with a driver, but I can’t say I’ve ever seen any of the overly-privileged fucks that ride these things move anything other than their mouths and beer-drinkin’ hands. In turn, it makes the contraption look more like a rickshaw, which is kind of racist, don’t you think?

I don’t think that’s going out on the limb. I mean, let’s talk about how it stands as a testament to (white) privilege that the only PoC I ever see on the bikes are the employees, who always look about a block away from giving themselves the Cobain haircut. I don’t blame them either; we can all hear these squawking riders from blocks away, wooing away about all the Fireball shots they’re going to take at their next stop. One can only imagine what it’s like to have a dozen drunks all speaking at concert volume in a small space at 3 in the afternoon.

But, oftentimes, the drivers are no better themselves, really. What gives these guys the right to park right in the middle of the street whenever they feel like it, blocking lanes of traffic for as long as they feel like it, even going so far as to refuse to move when confronted about it by Deep Ellum business owners? I mean, yes, beer delivery trucks do essentially the same thing with few complaints, but at least they are bringing something to the ‘hood that we all universally adore. We’ll take a cold one over a tipsy, traffic-blocking woo girl any day.

I hate that I sound like an old stick-in-the-mud here. Look, I get it: The Party Bike concept is supposed to be a “fun” solution to drunk driving. But, really, I just think it’s all about privilege. The same people who can buy themselves out of tickets and fines for bad decisions now get to spend money on getting drunk in the public eye and shakily avoiding open liquor laws, all while singing Journey as off-key as possible.

Listen, I’m all for an entrepreneurial spirit and seeing people make money. I just don’t like seeing people doing it at the expense of other people’s good times.

So keep on with your booze-cruising, by all means. Just don’t do it in my neighborhood. That’s all I ask.

Roll out,
Porttia Portis, and the rest of the Central Track staff