New Downtown Dallas Sculpture Is A SkaterBIRD Who Said See You Later Bird.

Six years ago, making good on its promise to erect some new art in the place of the mural-filled tunnel entryways into Deep Ellum that it had demolished to make way for a new light-rail station, Dallas Area Rapid Transit unveiled unto the word a $1.4 million trio of metallic “Traveling Man” sculptures along Good-Latimer Expressway.

And, hey, all was forgiven. Well, at least somewhat: The Brad Oldham-designed, guitar-headed robot has since become an iconic figure for the neighborhood — a visage endlessly recreated on murals, T-shirts and rock show flyers.

What more can I say?

Well, this: Now that Oldham’s design firm has moved into the lower level of the parking garage located at 1200 Ross Avenue in Downtown Dallas, that neighborhood too is getting a shiny icon of Oldham’s to call its own.

He is a skater bird.

Installed on the roof of said parking garage over the weekend, SkaterBIRD is, essentially, just one of the birds we’ve already long seen palling around with our old friend the Traveling Man, now inexplicably perched atop a skateboard.

He said see ya later bird, is all.

In a statement, Oldham attempts to explain his choice by saying that designers and skateboarders are similar in nature, with both trades benefiting by tons of repetition and both being pretty badass.

That’s all fine and good, but I think we all know the real reason SkaterBIRD exists.

Can I make it any more obvious? 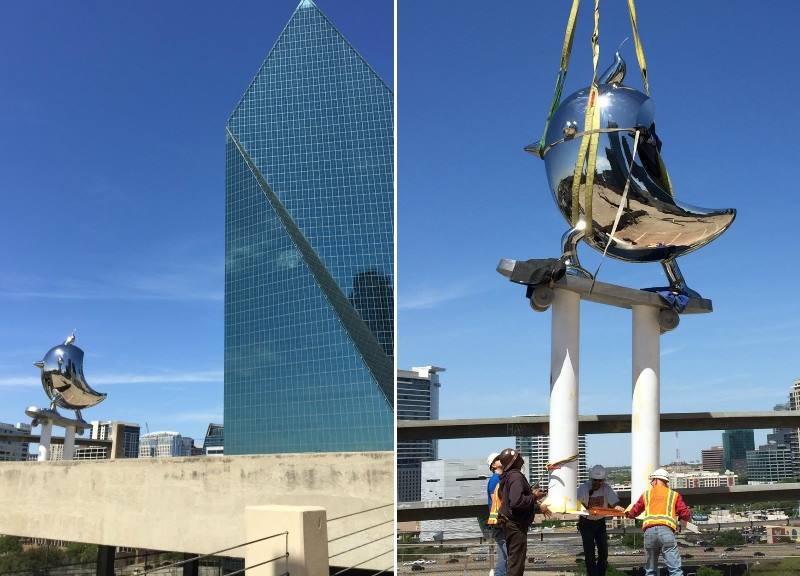