Nickel And Rye, Bolsa and The Libertine Share Their Unique Takes On The Old Fashioned.

In the realm of cocktails, the Old Fashioned is the Clint Eastwood — a drink of few words, simple at its core but with a rougher exterior.

The original, untouched Old Fashioned served back in pre-prohibition days was an astoundingly simple drink that, truthfully, wouldn't even be called a cocktail by today's standards. It was a cube of sugar in the bottom of a short glass with a couple moistening dashes of Angostura bitters and ice. From there, the patron would be allowed to pour bourbon or whiskey to their heart's content.

It was a beautifully simple drink, one that satisfied the liquor purist with a cocktail they could feel dignified sipping on. It was also largely considered a man's drink due to the simplicity and power of the liquor.

After prohibition, the Old Fashioned reemerged completely changed. Where once it was a comfortingly simple drink every bar could make with little to no fuss, the Old Fashioned had become a muddling of citrus, sugar (and not the original cubed kind), blended whiskey and some extra bitters.

It may take a little longer to make, but now it's a proper cocktail.

Good or bad, this new Old Fashioned came to be the cocktail of the '50s and '60s. Still, until the last decade or so, it had been absent from many bar menus.
But, with the rise of bar and mixology culture, this classic granddad's drink started sprouting up on bar menus across the nation. Then, thanks to AMC's dapper, suit-donning ad men — who are constantly sipping on Old Fashioneds — the drink got an extra push into the mainstream. Today just about every bartender knows how to make an Old Fashioned, and many will offer intricate and unique house spins on the drink that used to be built upon simplicity.

Here are some of our favorites.

At Nickel and Rye — a popular destination for winos and cocktail lovers alike — the staff sticks to a simple take on the new-age Old Fashioned recipe.

Sure, it may share very little lineage with the original — they use simple syrup instead of sugar cubes, add in orange and lime peels and mix it with black walnut and orange bitters alongside the regular Angostura — but it's not a wild departure from a post-prohibition Old Fashioned.

The main difference in Nickel and Rye's Old Fashioned is the lack of muddling. Where the orange and lime peel would usually be muddled in the bottom of a shaker, Nickel and Rye simply spritz the peels on ice and drop them into the glass. “We decided it might be a bit overwhelming,” says bartender Marie Stinson. The result is an Old Fashioned that maintains a bit more focus on the whiskey than the diluting notes of the citrus.

Bolsa's take on the classic, meanwhile, abides by the loosest definition of an Old Fashioned — sugar, bitter and liquor.

In lieu of the typical whiskey or bourbon, head bartender Kyle Hilla takes it a more flavorful direction with the introduction of rum. Instead of a lump or sugar or a pour of simple syrup, hibiscus syrup is used to sweeten the mixture. Add a bit of vanilla tincture made in-house for a little extra sweetness and the regular Angostura bitters, and you have Bolsa's Stockade.

It may be stretching what an Old Fashioned is, but if you're searching for that sweeter Old Fashioned without the edge of a dry whiskey — or if you just love rum — this is one of the better versions in town.

While Bolsa's cocktail was built upon the loosest definition of an Old Fashioned, Will Croxville over at the Libertine sticks somewhat closer to the original recipe at the base, but then adding in wild ingredients until it threatens to become something else entirely.
The Carrie Can Drink this Old Fashioned — which we're pretty sure he named on the spot — may be complicated in its creation, but the result is something so tasty that we'll ignore that Don Draper wouldn't call this an Old Fashioned, either. Don't get us wrong, it's not a bad thing.

Croxville gave the drink its name because his fellow bartender is allergic to oranges and “everything has to be designed around her fucking allergy,” he quips. And since the typical Old Fashioned is made with plenty of orange, he needed to discover a recipe that works without the ingredient.

Instead the defining taste of this cocktail comes from their house-made truffle honey. The sweetness of the honey rings throughout the yellow-tinted drink and the truffle oil helps to bring it a delicate and hearty taste which keeps the honey in line. Croxville also adds a couple dashes of gumbo bitters which further complicates the flavor profile of the drink, adding in notes which ensure the sweetness of the honey doesn't get out of hand.
From there it's a normal Old Fashioned — a liquor mix of bourbon, rye whiskey and scotch are mixed and shaken with the bitters and poured over a Cold Standard hand cut ice cube.

And though this drink may be a bit hearty for the dead of summer, it's a thoroughly enjoyable take on a classic. 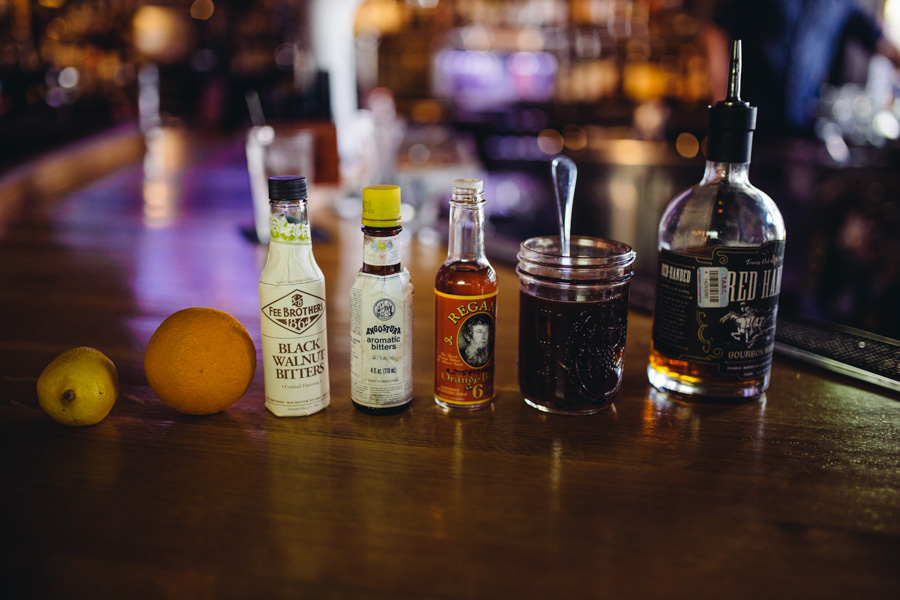 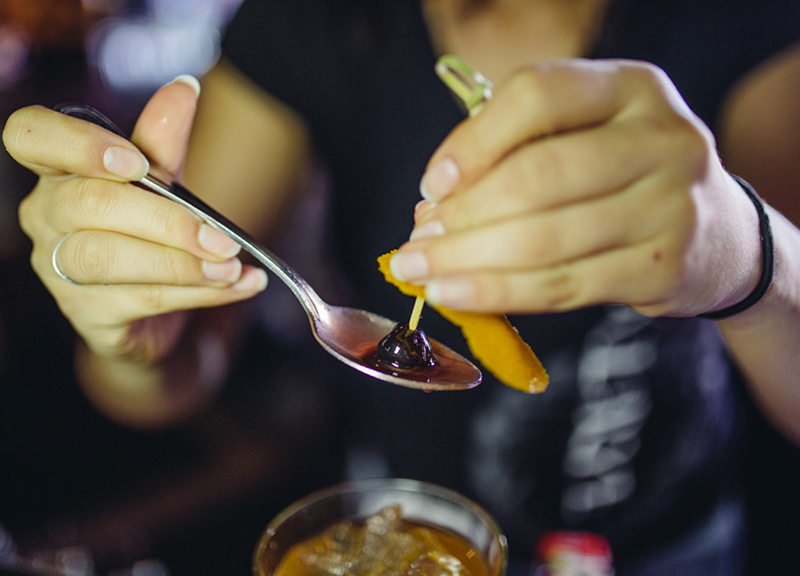 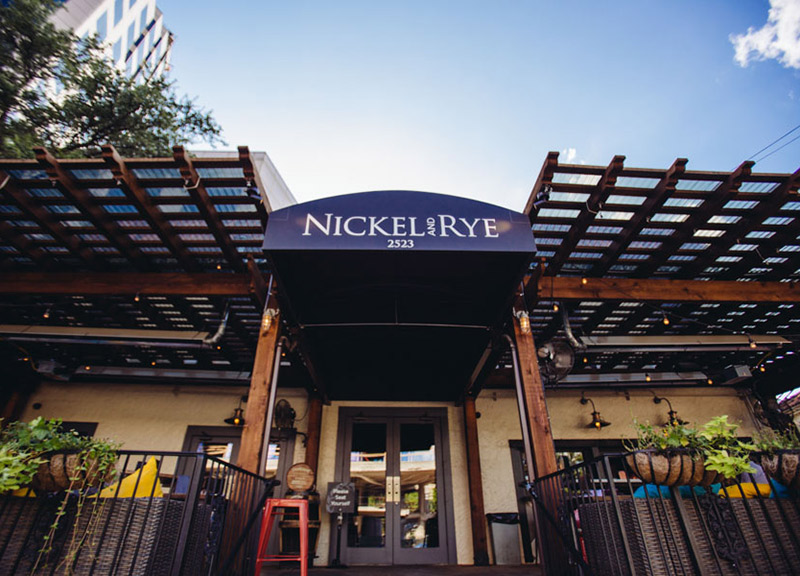 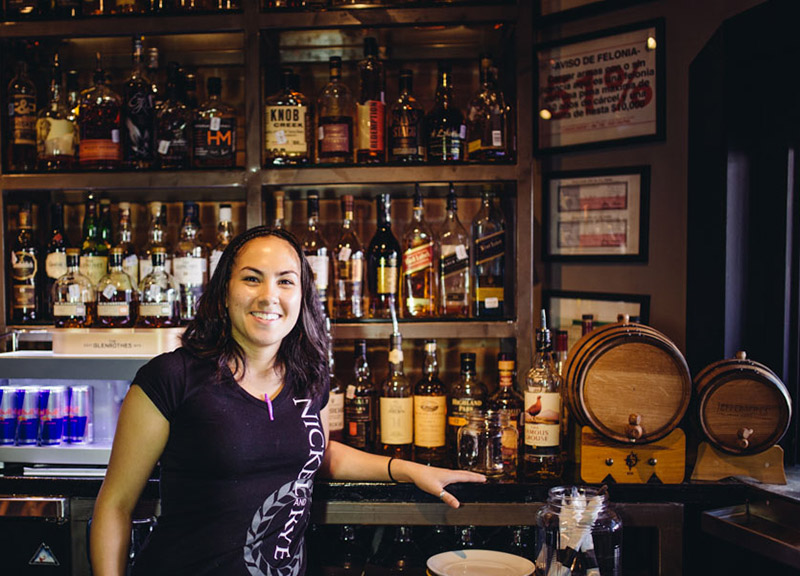 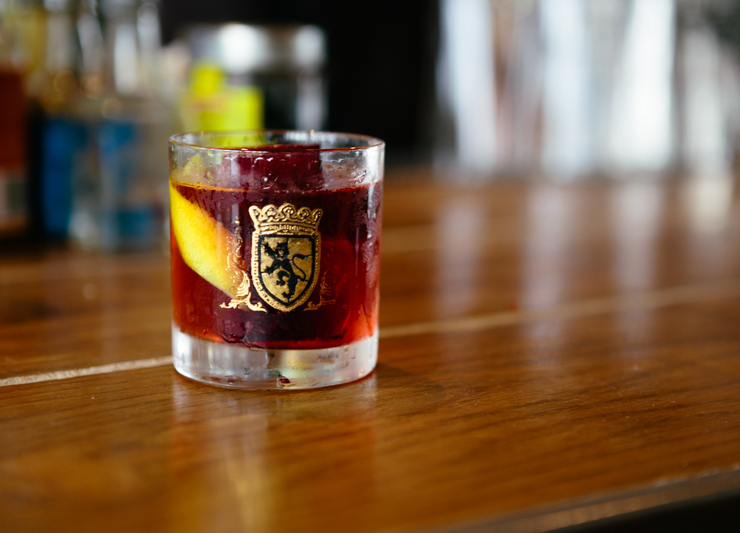 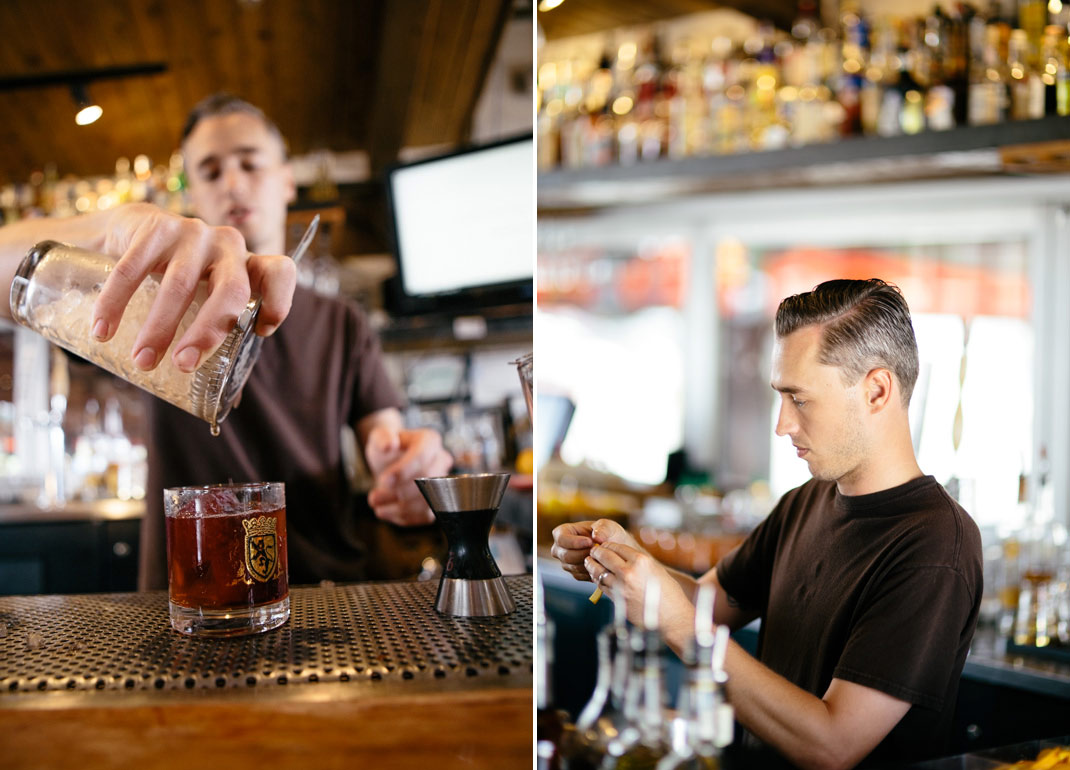 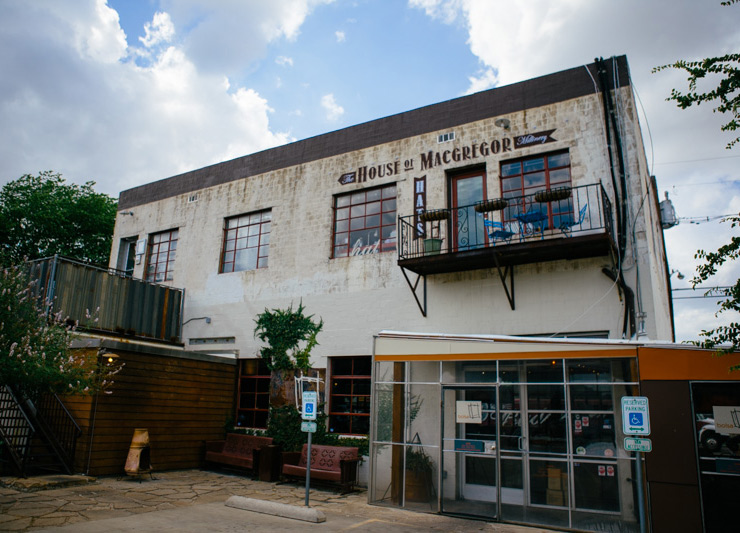 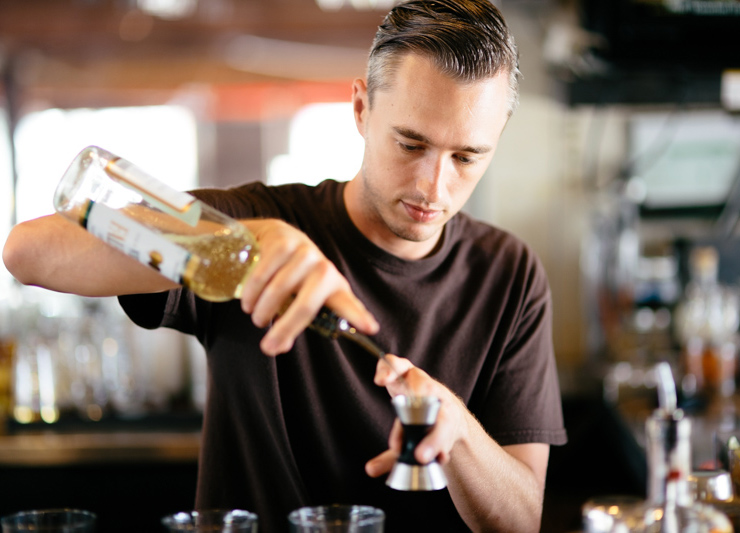 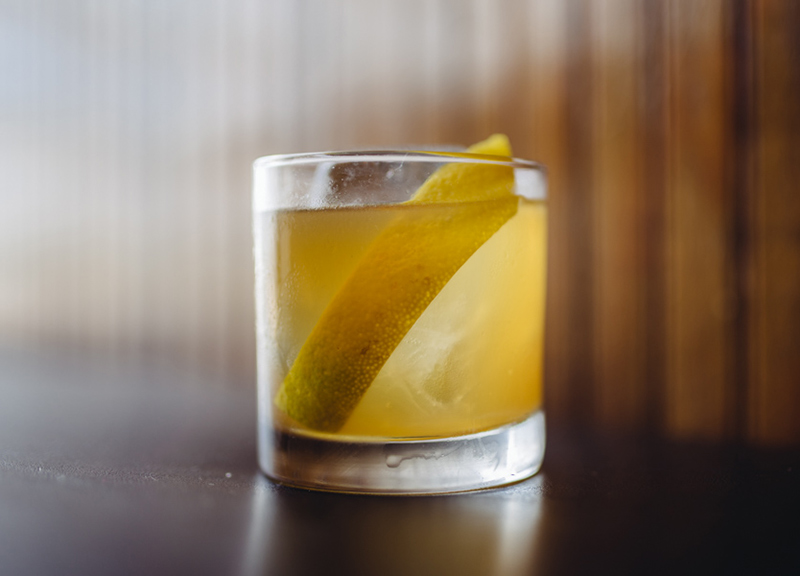 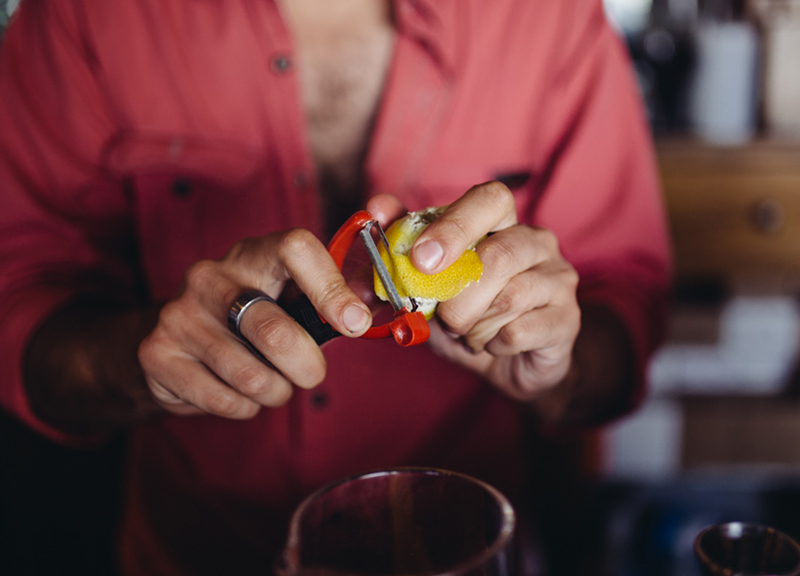 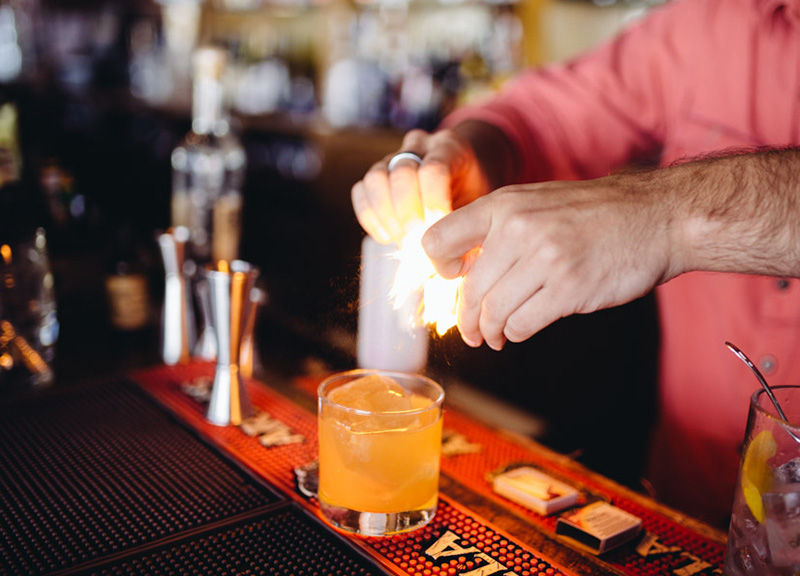 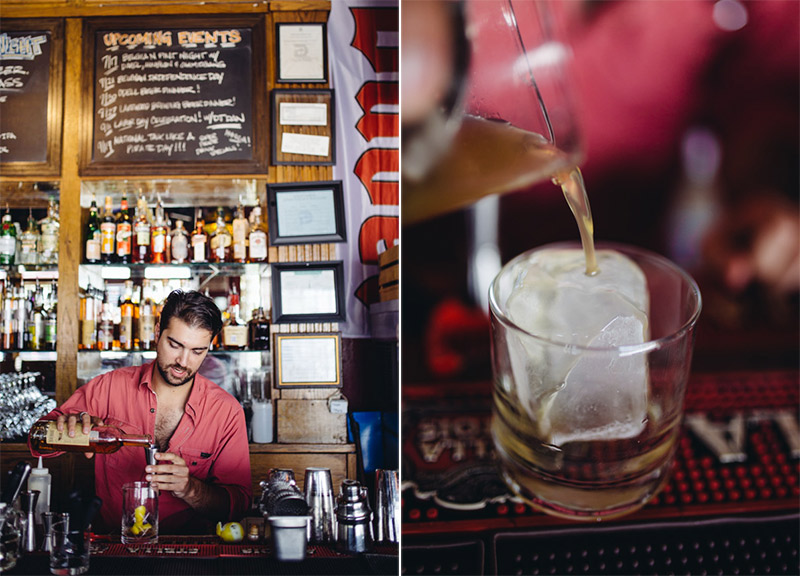 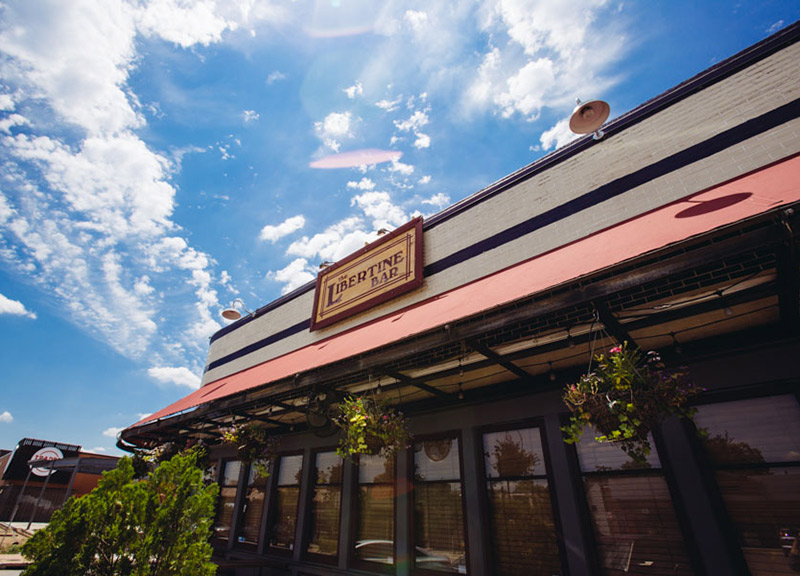 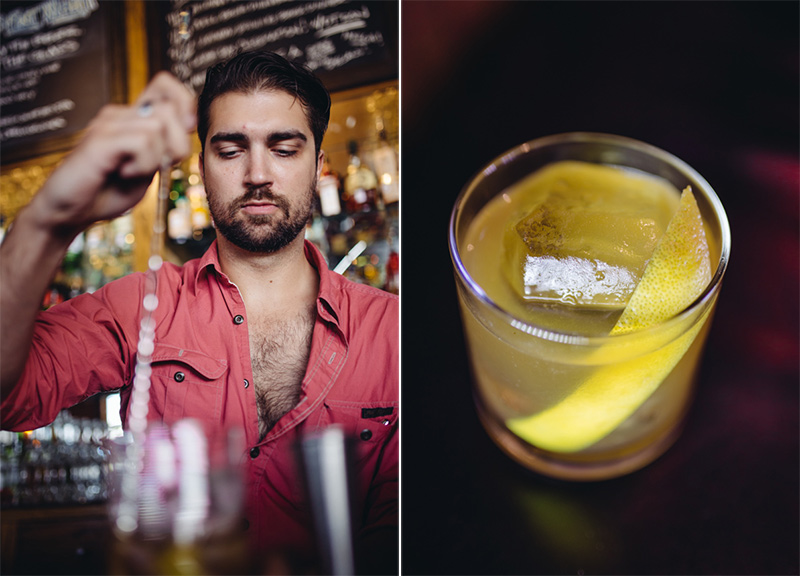