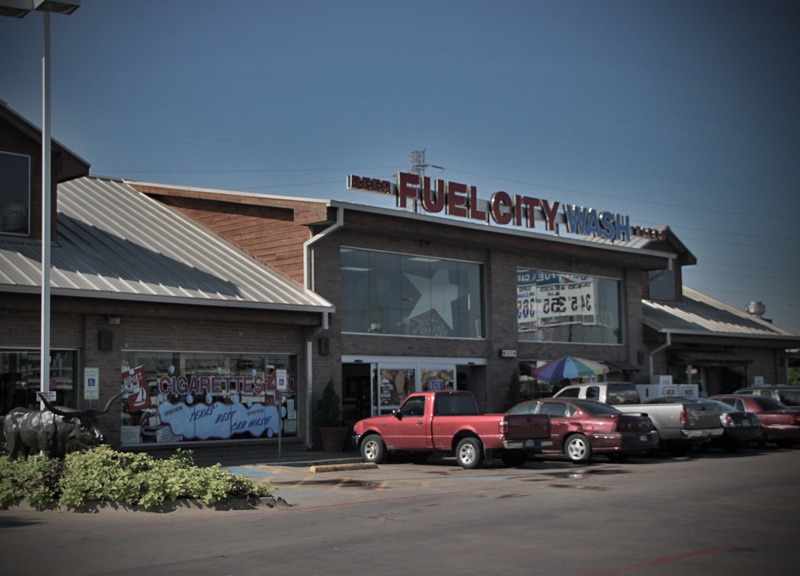 Are Dallas’ Most Famous Gas Station Taquerias All They’re Cracked Up To Be?

It’s a place where you can fill your jalopy’s tank as well as your own.

Among the local options, none is more legendary than Fuel City, which stands as something more than a gas station on the banks of the Trinity River. It’s a theme park, really. There’s a swimming hole, longhorn cattle and even a nodding donkey on this gas station’s grounds. But it’s the tacos, available 24 hours a day, that drive business here.

Fuel City’s owner is savvy enough to both know this and exploit it.

Earlier this year, two Fuel City press releases were circulated. One was about the new patio, with its lattice cover. The other was about the station’s new partnership with Gulf Oil, and, somehow, that bit included a one-day special on tacos.

Fuel City, clearly, has capitalized well on its reputation, which was secured when Texas Monthly named it the best Texas taco spot in its December 2006 cover story, “The 63 Tacos You Must Eat Before You Die.”

This year, though, something happened.

I went one step farther, calling them the Catcher in the Rye of tacos. I also noted that the accidental ingestion of infant vomit is preferable to the consumption of their picadillo taco.

What I haven’t yet noted is how Fuel City stacks up to its sibling gas station taco haven, Fuel Town on Inwood.

So, off I went to visit Fuel City again — and with a clean slate, promise — and Fuel Town. My objective was to compare the two and declare a decisive victor. My conclusions weren’t that simple.

There are, of course, a lot of similarities between each of these spots. They both attract folks from all walks of life. Stiff suits asked to pick up a large order for fellow cubicle jockeys stand patiently in the same line as the day laborers. Late at night, beautiful party people share space with bedraggled truckers and night owls of all sorts.

It’s really quite marvelous to see the taco as the great equalizer in that regard. Too bad the quality of these spots aren’t all that great.

Really, my opinion of Fuel City’s pride and joy, the picadillo tacos, remains unchanged. I will say this, though: Their barbacoa is a decent selection. It offers no surprises and sticks to form, with rivulets of fat running alongside the grayish brown beef strands. Unfortunately, the barbacoa at Fuel Town left me feeling like I had chugged a 24-ounce bottle of vegetable oil chased with a meaty ball of dip. My taco al pastor at Fuel Town was satisfactory, though. The pork was warm, with good color and a mellow flavor, and no surprising burst of achiote or chile. Quixotically, though, the tortilla was cold. Meanwhile, as picture perfect as Fuel Town’s carnitas taco was — curls of skin-embracing pork, dotted with cilantro and white onion — the over-zealous seasoning of the meat resulted in several bites of porcine salt bombs. Fuel City’s chicken fajita, on the other hand, was pink and dry with slimy threads of onion. Its beef counterpart was tough.

While I was able to score a seat at a Fuel City picnic table under the patio, that meant eating with a side of poop. The wooden tables aren’t cleaned often, it seems. By the time I finished my order, I had pigeon feces on the side of my left hand and on my right elbow. That isn’t romantic, and romance is what truly fires the fascination with these places.

Still, I will say this: People new to Dallas ought to try Fuel City and Fuel Town at least once. They offer a glimpse into what the Dallas taco landscape was like several years ago.

But, I implore you, consider these trips something of an archaeological taco expedition.

There are indeed better gas-station taquerias more worthy of your time and money. Start with Bachman Tacos & Grill inside the Bachman Lake Chevron on Northwest Highway, where patrons munch on superlative pastor prepared on a trompo. Le Tejanita inside the Flash Mart at Park Lane and Abrams Road offers some of the best breakfast tacos around, too. Either of these spots are better than Fuel City or Fuel Town combined. But neither currently has the reputation.

Legends never die. Even if, maybe, they should.