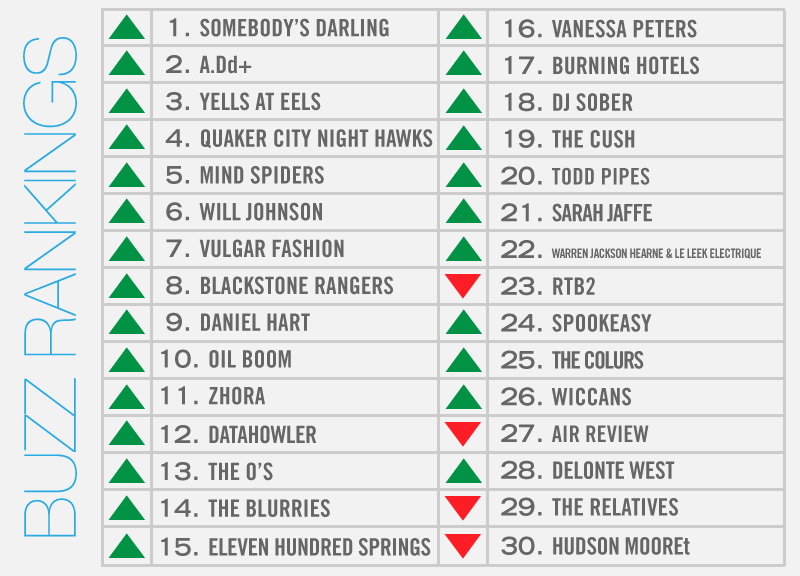 Though statements like the following get thrown around a lot, this weekend is, perhaps, one of the busiest music weekends that Dallas has seen in years.

The two-day Index Festival at Trees and the all-day lineup of bands at Bryan Street Tavern's Big Fucking Anniversary Show would go a long way toward proving that statement true, even if national acts like Big K.R.I.T., Dinosaur Jr., Flobots and Astronautalis weren't performing at various local venues this weekend, too.

Still, even with all that's going on in this ridiculously packed weekend, another show has helped put a favorite local country act atop this week's list of buzzing acts. After a month-long tour — and over a month since their sophomore full-length was released — Somebody's Darling returns to town this Saturday to play its homecoming/album release show at Dada. Aside from our own coverage of the long-time-coming album, the adored country act received feature articles in pretty much every major publication this week. And, not surprisingly, they were revealed as nominees in the “Best Country Act” category in this year's Dallas Observer Music Awards.

No matter which of these shows locals choose to attend, they'll have the privilege of enjoying a big chunk of bands nominated for DOMAs this year. Furthermore, it was announced earlier this week that Daniel Hart, Blackstone Rangers and Burning Hotels will be performing at this year's Art Conspiracy fundraiser.

Elsewhere, it was revealed this week that The O's, Eleven Hundred Springs and Quaker City Nigh Hawks ar among the bands that will featured in two-minute slots in the North Texas Chevy Music Showcase which will air on WFAA-TV on Tuesday and Thursday nights this fall, just before the Jimmy Kimmel Live! Not surprisingly, these acts are nominated for DOMAs as well.

Meanwhile, Denton electronic duo Vulgar Fashion came to the collective attention of North Texas and beyond this week when they were featured on the Denton-based video series Violitionist Sessions.