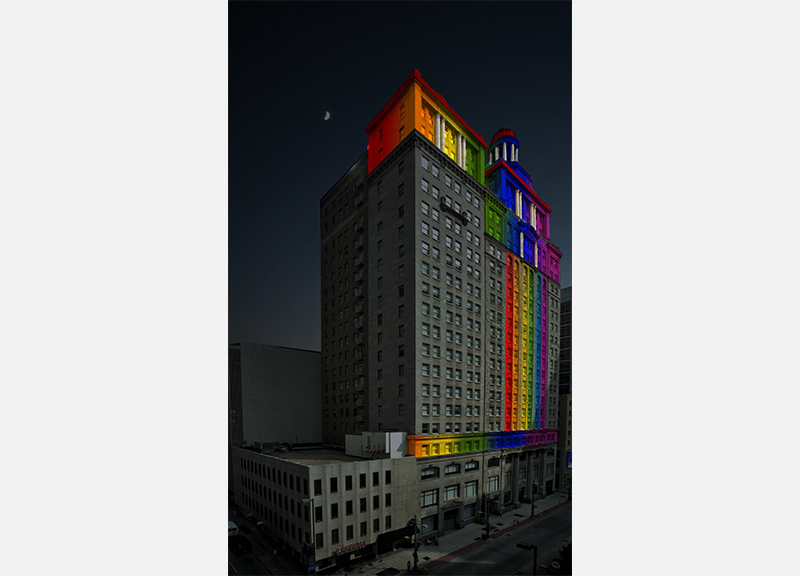 It's a big week for civil rights in America, and, as such, right this very second, a couple of major rallies are currently underway across North Texas. Over in Dallas' Cedar Springs District and up at the Courthouse on the Square in Denton, LGBT rights supporters are gathering with pickets and signs and flags to make known their position on the two landmark cases being discussed before the U.S. Supreme Court this week — which is to say that they'd very much like to see both the Defense of Marriage Act and California's Proposition 8 ruled as unconstitutional by the judges, who'll hear oral arguments over these cases on Tuesday and Wednesday.

But, once the sun goes down on Dallas tonight, an even bigger show of support will be visible by anyone with a clear view of the Dallas skyline. Starting tonight and running through Saturday, March 30, the Davis Building in Downtown Dallas will be lit up in rainbow LGBT pride colors as a show of support for gay rights.

The Bascom Group, which owns the Davis Building (located at 1309 Main Street), explained their motives for the lighting move in a press release making the rounds this afternoon: “The Davis Building is proud to launch Phase II [of its David Building lighting project] on the eve of the US Supreme Court hearing two landmark cases, Prop 8 and Defense of Marriage Act. The building will be illuminated through Saturday night in support of the LGBT movement and in support of marriage equality.”

Say what you will about Downtown Dallas' recent obsession with lighting its skyscrapers, but at least this lighting actually means something.

Below, check out an artists' rendering of what the building will look like after dark for the rest of the week.

(Tip of the cap to the Dallas Voice.)