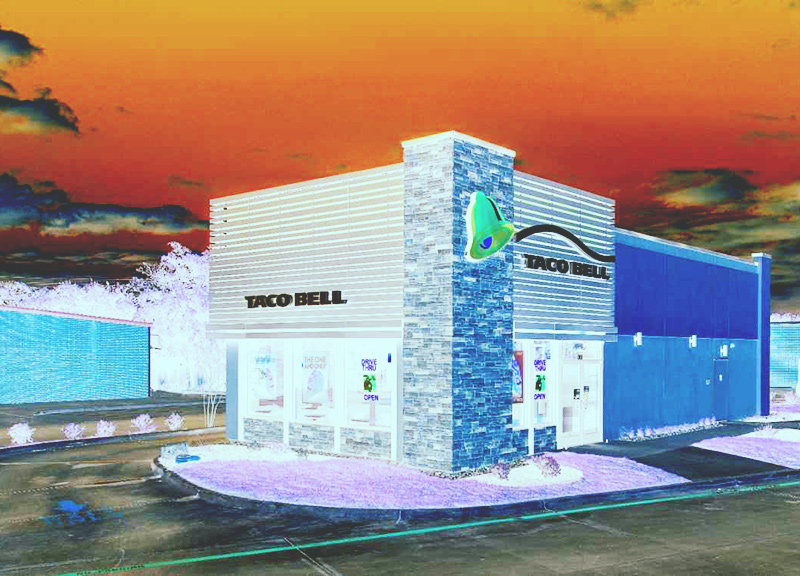 Out To Lunch With John Tesar and Matt McCallister.

Part One of Maybe One. John Tesar and Matt McCallister, mid-convo while out at lunch.

Tesar: You want mild or spicy?

McCallister: Neither. I celebrate the Taco Bell Crunchy Taco Supreme taco in its purest form.

Tesar: I get that. I had a phase like that for a while, but then I grew a pair, hashtag #Burn, hashtag #ClassicTesar.

Tesar takes a huge bite into a glistening Steak Gordita Supreme. The gordita is honored to be on the mouth of a fancy chef rather than the drunken sweatpants-donning manbeard it had been destined to meet from the moment it was frozen and shipped to this particular Taco Bell location.

Tesar: So, Filament opened the other day. Congrats, Chef.

McCallister: Thanks, man. Opening up three or four more restaurants in a week or so.

McCalister chugs an entire Diet Coke in one gulp. A pure, seemingly infinite, wave of self-hate washes over him, which causes him to immediately throw it back up.

Tesar: Oh yeah? Me, too. Except I’m opening 20 in a couple days, so. Anthony Bourdain. Jacques Pepin.

Tesar: Oh, no. Sorry. It’s this thing that happens to me when my blood sugar gets low. I’m coming out of it. Alice Waters. Just bear with me a second. Regular Julia Child. And also Meryl Streep as Julia Child in Julie & Julia. The book, not the movie. OK, I should be good now. Bradley Cooper. BURNT. DAMMIT.

McCallister: Yeah, well, it’s cool that Filament is already a Best of Big D for like eight categories from D Magazine now. They sent us a sticker like a couple hours before we opened to just save time and I really appreciate that, ya know? Takes the pressure off and gives me time to focus on my new passion, my cologne line, McStank, which is 100 percent beads of my own sweat that we collected since day one – and just the good ones, none of the half-ass sweat beads. We’re storing it all in a secret tank at Braindead. Nobody knows, so keep it quiet.

Tesar: Sure, no prob.

Tesar somehow retweets his own tweet he just tweeted about McStank, tagging McCallister and also, for some reason, Eric Ripert.

McCallister: So, what’s the name of the restaurant you’re opening, again? It’s like Sauce Sprocket or Bouillabaisse Exclamation Points or Italian Pants or something?

Tesar: What? Oh — sorry. Say that again? I got distracted writing an impassioned four-paragraph response to a Facebook post in my feed. I just get so sick of people posting stuff, and I just have to bring the truth. Hashtag #ClassicTesar. Hashtag #TruthBombs, y’all.

McCallister: Who said shit? I’ve got your back.

Tesar: My aunt posted a picture of her dog with the caption, “I love this dog! Furthermore, I love life!” and it just set me off and I had to bring up Leslie Brenner again, except I never say “Leslie Brenner” anymore because I’m actually scared she might Beetlejuice into the room.

Tesar: Did you get all that, or should we do it once more? We’re good? Good.

Tesar focuses back on McCallister.

Tesar: So, yeah, my place is Gravy 51° — because fuck Dallas, that’s why. People were all, “When are you opening Fork hahahaha? When are Plate and Placemat starting to serve up dinner, my joke is so original and hilarious bwahahaha?” And I’m like, “Suck it, Losers. I could name this place Dong Lice and I’d still charge you forty dollars for pasta, and you’d blog the shit out of it like there’s no tomorrow because it’s gonna be delicious and you can’t even deny it, not even a little bit.”

The most awkward fist bump in the history of fist bumps occurs. A roach that had previously been scurrying across the floor stops mid-scurry to turn his roach neck and then shake it disapprovingly.

Tesar: So, what’s your next place called?

Instead of speaking the new restaurant name, McCallister simply writes it in on a piece of used toilet paper he locally sourced during his powerwalk this morning. Every creative success he’s ever had has started with a good powerwalk. He likes the way it makes his “hips go all wonky.”

McCallister: Nah, you’re mispronouncing it. Just breathe out all the air in your lungs real quick, like someone punched you in the gut. Because the food is gonna be a swift dick-kick.

Tesar: Dude, nobody will get that here. New York, sure. They’re ready for a name like that. But Dallas? Maybe in 10 years.

McCallister: I know, man. I know.

Both men savor the rest of their combos in silence while simultaneously contemplating throwing it all away and opening 20 Taco Bell franchises, which would all open on Royal Lane and would all do spectacularly well.

On our next episode: Tragedy strikes when a Zoli’s Grandma Slice takes over Dallas during a thunderstorm of epic proportions that Delkus saw coming but decided not to roll his sleeves up about.

Alice Laussade is a James Beard award-winning writer who hates brunch and is the mother of Meat Fight. Yell at her on Twitter here.

OTHER DALLAS FAN FICTION WEEK STORIES.
• All Tay’s Exes Perform In Texas. On a serendipitous evening three of Taylor Swift’s ex-boyfriends perform in Dallas at the American Airlines Center. Yes, there is drama. Yes, there is bad blood.
• I, Nowitzki. Comedian Clint Werth pals around with Dirk Nowitzki, then steals his identity — and much to the chagrin of Tim Duncan.
• The Misadventures of Lo Down Loretta Brown. Ever wonder what it’d be like if Erykah Badu was a superhero? In this story she is; she’s Lo Down Loretta Brown.
• Too Old For This Chip. Frustrated at Dave for always exploiting them, the Chipmunks quit Hollywood, move to Texas and become the best ever death metal band in Denton.
• Dr. Phil’s Show of Revelations. Jerry Jones appears on Dr. Phil to unveil a big secret. But will anyone believe him?
• Another Keep-It-Real Moment. What happens when a radio ad pitch stops being polite and starts getting real?
No more articles