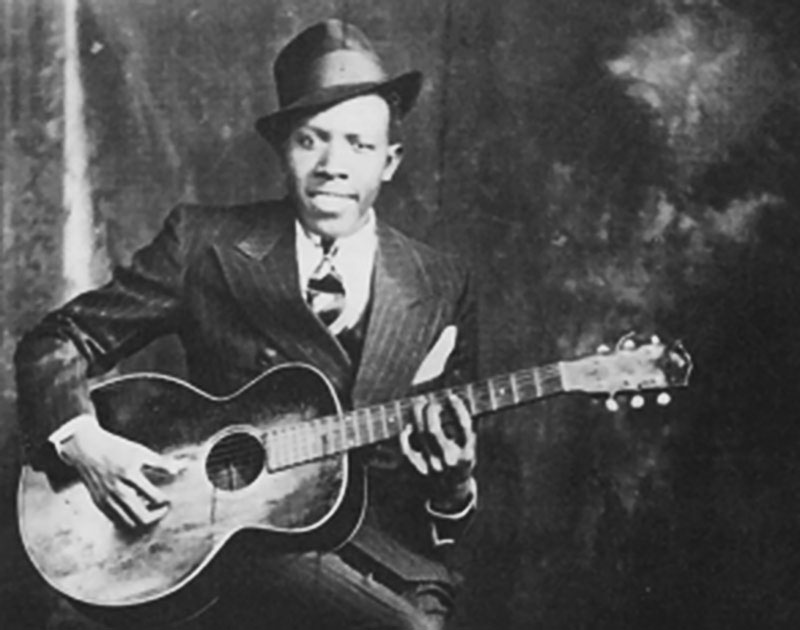 On Saturday, 508 Park Ave. Will Host An Anniversary Concert, Offer Tours Of The Studio Where The Legendary Bluesman Laid Down 13 Of His Known Recordings.

When Texas Slim was maybe 8 years old he would walk from his guitar lessons at McCords Music on Elm Street right past 508 Park Avenue and over to the public library where his mother worked.

He walked by this building maybe hundreds of times as a kid. But only once he became a professional blues musician as an adult did he realize that the building he was passing each day on the way to meet up with his mother was the site of one of the most influential blues recordings of all time.

In 1937, a Mississippi Delta bluesman named Robert Johnson made his way to 508 Park Avenue to record 13 tracks — nearly half of his entire known catalog. The following year, Johnson would die at the age of 27. But the impact that his recordings left on music was profound, particularly in the realms of blues and rock’n’roll and upon musicians like Slim.

This Saturday, June 17, the 80th anniversary of Robert Johnson’s June 19 and June 20 recording sessions in 1937 at 508 Park will be celebrated with a concert of performances from Slim and his fellow bluesmen Jim Suhler, Aron Burton and JMac at the amphitheater that sits within the Encore Park campus that surrounds the building. Another lunchtime concert held in the same venue from 11 a.m. to 1 p.m. on Tuesday, June 20, will also see Dallas band The Venetian Sailors covering a selection of Robert Johnson songs, and it will be free to attend.

Early comers to Saturday’s ticketed concert can even catch a tour of the storied building in which Johnson recorded — something that would have been impossible until just a few years ago.

“Going inside, it was absolutely haunting,” Slim says of his first visit inside the marble Art Deco building made famous by Johnson. “I don’t think if I went in a hundred times in a hundred days it would be any less [impactful]. The hair [was] standing on the back of my neck. You can just feel that vibe. You can just feel that some things happened there that were really significant.”

For years, 508 Park has long been a kind of shrine or pilgrimage site for fans of Gene Autry, Bob Wills, The Texas Playboys and, most of all, Robert Johnson, the bluesman that sold his soul to the devil in exchange for musical talent, or so the legend goes.

For years, people have been seen coming up to the building just to put their hands on it, says Pat Bywaters, executive director of the Encore Park organization now in charge of the property.

“I’ve caught people out here from France and Belgium,” Bywaters says. “I’ve had people show up, and they wouldn’t even know what to expect. They didn’t know if the building would be here or not. They were just looking for the address. They were blown away by what they were seeing.”

What they saw was a building had been left empty and moldering, one that was falling into such disrepair that it had been threatened with demolition, just as many other historic Dallas buildings have at one time or another. But in 2011, the neighboring First Presbyterian Church of Dallas snatched up the decaying property and began a detailed restoration project.

“Most of the preservation folks we’ve had through here said we have gone far beyond what we’ve needed to,” Bywaters said. “We’re putting all our effort into research.”

As an example of the level of detail they’re pursuing in the restoration, Bywaters points out the sconces on the exterior of the building. The originals had been removed at some point in the ‘60s, the team at Encore Park thinks. Using photographs of the building from that time, though, they were able to commission replica fixtures from the local Potter Art Metal Studios. The craftsman at Potter Art is convinced that his grandfather even designed the original fixtures all those years ago, Bywaters says.

The recognition that the restoration efforts at 508 Park is bringing to Dallas’ musical history is long overdue, says Suhler, one of the musicians scheduled to perform at the concert on Saturday. The building, Suhler is quick to point out, is significant not just for Robert Johnson’s recordings, but for the long list of artists who also recorded there, such as Olivia Mendoza or the Light Crust Dough Boys.

“In Dallas, history is sort of dismissed unless it’s monuments or freeways named after rich dead businessmen and civic leaders,” Suhler says. “There isn’t real attention paid to the artists that created the city.”

The Presbyterian church, which also owns the The Stewpot next door, integrated the building into its ever-developing Encore Park campus, which now includes a community garden, the aforementioned amphitheater and a monumental bronze sculpture wall depicting scenes from the history of Dallas. Plans for the campus’ continued growth include a Museum of Street Culture, an open art studio for the homeless and, yes, even a recording studio.

“Presenting the history and restoring the building is a great thing to give to the city, but it also helps us to collaborate with and support these non-profits across the street,” Bywaters said. “We want to support the local arts, whatever it may be — culinary, visual, performance, music.”

The 80th Anniversary of the Robert Johnson Recording Concert will celebrated on June 17 at Encore Park’s 508 Amphitheater, with tours of the building starting at 7 p.m. and live music performances commencing at 8:30 p.m. Advance tickets are $15 right here, or $20 at the gate. Head here for more information.