With Their 40th Anniversary Fast Approaching, The Grape Shares Their Bistro-Style Mussels Recipe.

The Grape is coming up on its 40th year here in Dallas. So, no, it's not a stretch to call the place an institution on our beloved Lower Greenville.

What's weird, though, is that, over the years, many people have seen the spot as somewhat unapproachable, and maybe a little “too fancy.” Guess what, guys? It's the opposite. And with summer approaching, their patio just might be your new best friend.

To celebrate the restaurant's impending anniversary, we sat down on opposite side of the table from The Grape's owner and head chef, Brian Luscher. It was more than a pleasing experience, and to all senses.

The guy's just got it down. The atmosphere, the food and the experience.

How long have you been at The Grape?
Well, I was the executive chef at The Grape for the original owners for four years, left for a couple of years, and then came back and bought it. So I'm going into my fifth year of owning it.

Is it a totally different experience to own it?
It's the hardest job I've ever had in my life! I look back at being the executive chef, then to being just the chef, and how much less there is to do in a day. A chef's job is a really difficult job; there are a lot of little things and a lot of big things, and you couple it with every other single responsibility there is. Yeah, it's the hardest job I've ever had.

Are you from Dallas originally?
I'm not, but I've been here for 15 years. My wife Courtney was born and raised here. She's the general manager of the restaurant. She runs the front of the house and is in charge of our killer wine program.

How is that, working with her?
[Laughs.] Like I said, it's the hardest job I've ever had in my life! Seriously, it's the best. I know what her motives are. There are absolutely no angles, just trust.

Was that the original plan?
It was. Courtney, on her own accord, is an excellent general manager. She was the GM at Dakota's when it got 4.5 stars from The Dallas Morning News years ago. We actually met in the restaurant business.

Where else have you worked in Dallas?
Well, I left The Grape to open up a PGA tour-owned and -operated country club in McKinney. Definitely at the time, I thought it was the coolest thing ever. I thought it was what I had been working towards my whole career. I was making money, but after about three years, it just wasn't fulfilling. It was a lot of club sandwiches and chicken fingers and ranch dressing. That's cool, but just not what I wanted to do. I really wanted to cook. So that's when I decided I wanted to open my own restaurant.

Is that how you ended up buying The Grape?
Well, we were looking around, had a bid on some property, had some contractors lined up and then I got a phone call from the owners of The Grape. They were looking to sell — but not to just anyone. Sixty days from that phone call, we signed the purchase agreement.

What do you think the public perception of The Grape is?
Everybody has always had this pre-conceived notion for the longevity of The Grape that it's this fancy place. People think it's too fancy.

What is your goal for The Grape?
My goal is for the experience to take place. Not just because of me, or the food, or my wife or her wine — not any one aspect — but the entire experience. By the end of the night, I want everyone to have elbows on the table, cheeks to be rosy, laughing out loud, just having a good time. Once people get in here, they realize it's a bistro. Just like a bistro you would find in any major city — San Francisco, New York, Philadelphia, Boston. You go into these old cities and there are places like this. If you found yourself transplanted into one of these neighborhoods that had a place like this, it would be your favorite spot. The food is honest, it's good and it's super approachable. It's about accommodating our guests and creating a great experience. It doesn't have to be super over-the_top bonkers to be a great experience.

Aside from The Grape, what's your favorite restaurant in Dallas?
Lately, I've been going to Il Cane Rosso. I like what Nick Badovinus is doing at Neighborhood Services. It's solid, it's a nice atmosphere. I think Bruno at The Mansion is creating the finest cuisine in our city. I adore anything he puts in front of us and he's just a cool dude. He's so chill. So many names, so much going on the city right now.

What do you think about the direction of the food scene at the moment?
Despite whatever bitching some people do in the press about how Dallas sucks, I don't see anybody trying to propel what we're doing through a positive energy. The majority of people in Dallas want steak, chicken fried steak and a margarita. I think there is a movement of people doing just that — just trying to make the honest, best version of what people want. Not over the top. But the best. Just honest and about the food. These guys are proud, yet humble, and just trying to make some good food.

The Grape is coming up its 40th anniversary. What has changed? What is the same?
The mushroom soup is the same. It's the third generation of a brother in the back that is making it. The chalkboard menu is the same. Cathy and Charolette, the gals that opened this place in 1972 after they traveled Europe after graduating from college, they had been in the big cities like New York and they thought Dallas needed a little place like this. They wanted something where people could try something different — a different wine, a unique cheese, a quiche. In 1972, not many people were eating these things. That spirit is still here. These classic items are classic for a reason.

Speaking of classic items: Luscher was kind enough to share with us his recipe for The Grape's bistro-style mussels, which are just ridiculously delicious. Here it is, complete with his notes on how to perfect the dish and its preparation.

Step 1: “Gather your ingredients. It's always a good idea to have everything ready to go before you begin, but with this recipe especially it's key. Here's what you'll need: 1 lb. of mussels, cleaned and de-bearded (Note: A good seafood purveyor will clean them for you. Also, be sure to discard any mussels that are open — and the ones that don't close with a gentle tap — when you're ready to cook); 1 tbsp. of olive oil; 1/4 cup each of finely diced celery, carrot and onion; 1 fresh bay leaf; 1 tbsp. of minced garlic; red pepper flakes; 2 tbsp. butter; 1 lemon, half of it sliced into rounds; fresh thyme; 1 cup of white wine (we recommend Sauvignon Blanc); and some salt and black pepper.”

Step 2: “Saute the celery, carrots, onion and bay leaf in 1 tbsp. olive oil over medium heat until softened and translucent.”

Step 3: “Add the garlic, a pinch of red pepper flakes, a few grinds of black pepper and 1 tbsp. butter to the pan. Stir and continue to cook until the aroma of garlic fills the kitchen.”

Step 4: “Add the lemon slices and a few sprigs of fresh thyme to the pan and stir to combine.”

Step 5: “Add the mussels, the white wine and the juice of the other half of the lemon. Turn heat to high, cover and steam for two minutes. Stir, cover again, and continue to steam until all the mussels have opened.”

Step 6: “Finish with the remaining tbsp. of butter and salt and pepper to taste. At this point, you could throw in some crusty bread and call it done, but for the full-on French experience we add fresh french fries.” 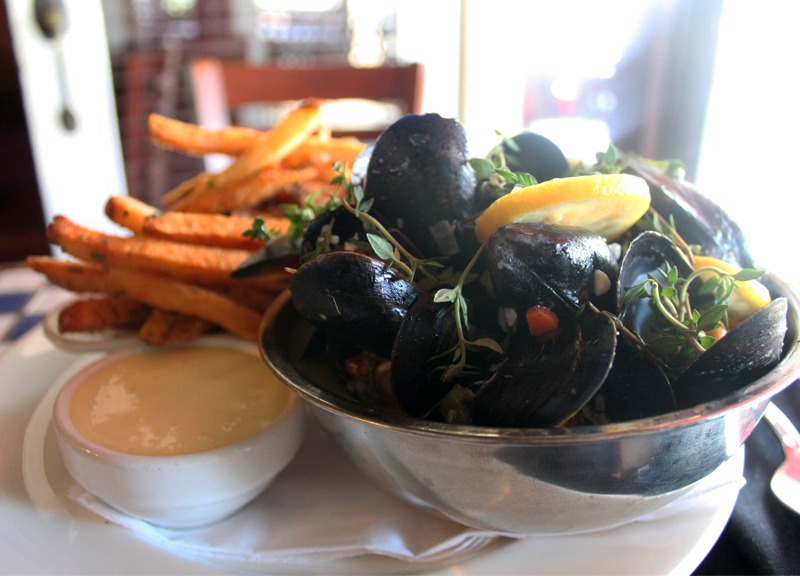 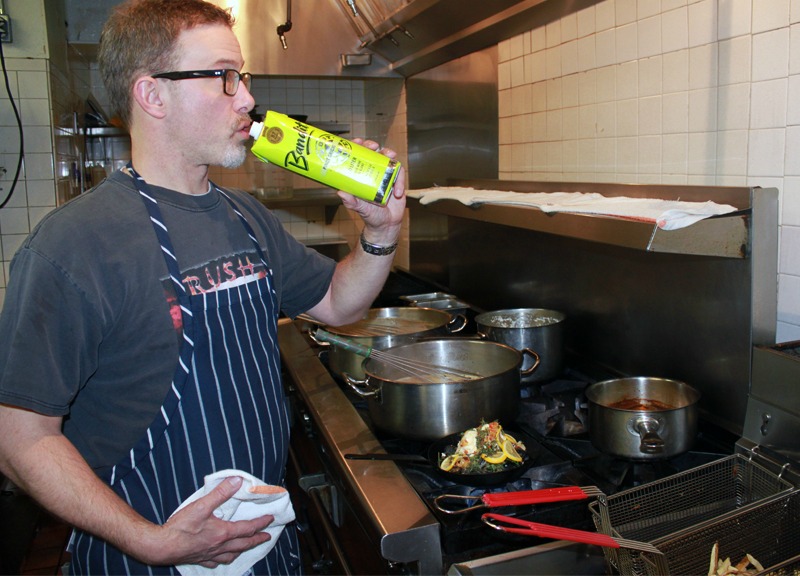 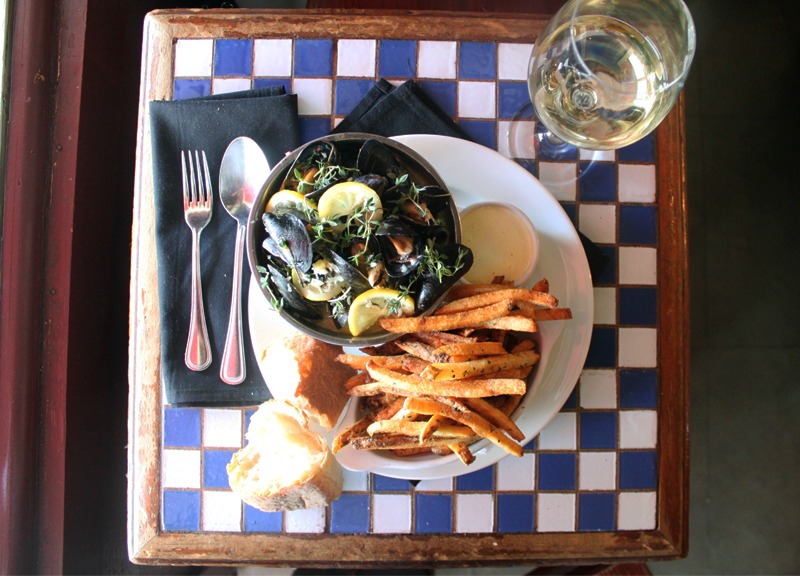