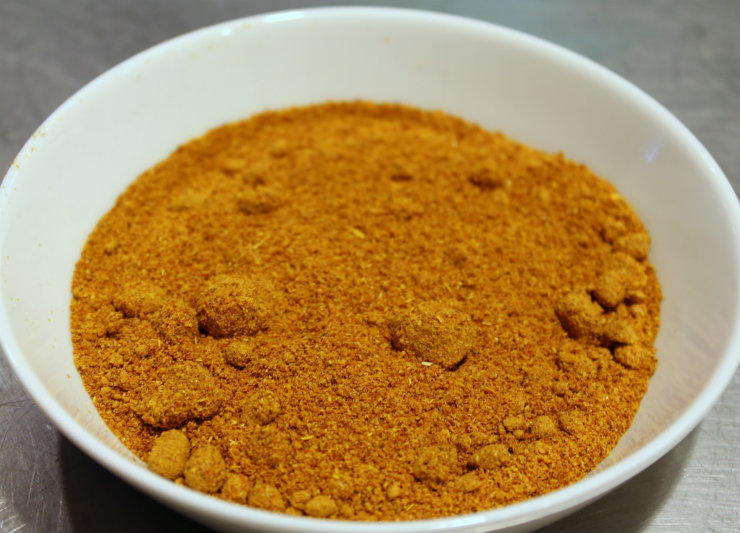 SER Steak + Spirits' Anthony Van Camp Wants His Ghost Chili Oil To Sneak Up On You.

Welcome to Wild Things, where we dive into the kitchen of some of Dallas' most daring chefs to find out what wild, interesting ingredients these food artists are playing with. Whether it's a taboo ingredient or just a food item you wouldn't think you'd find at a certain establishment, it's about time someone highlighted the unconventional and unexpected. Here, we invite you to open your mind — and your mouth — to the wild things in Dallas.

With the exception of one short summer job, the 29-year-old has always worked in a kitchen. And, though life as a chef means working long hours (we're talking 15-hour shifts, y'all), the guy straight loves his job.

He began his culinary career at the age of 16 in a TGI Friday's. First, he was hired as a host. But, soon, he finagled his way into the kitchen. And he's come a long, long way since, training with renowned chefs around the world and even marrying another accomplished Dallas-based chef in former Bolsa sous chef Nicole Van Camp.

Now, he runs the show at the year-old, upscale Hilton Anatole steakhouse, SER Steak + Spirits. In total, Van Camp has been with the Anatole for a whopping nine years, most recently as sous chef at the former eatery that SER replaced, Nana Restaurant.

He defines his cooking style as “progressive,” with influences from various world cuisines. And, in the following interview, Van Camp tells us about the wildest ingredient in his kitchen — an oil that's infused with a notorious pepper that boasts a very Halloween-appropriate name.

What is the wildest ingredient in your kitchen?
Ghost chili oil. It's ghost chilis that have been infused in neutral oil. We use grapeseed oil, but you can use anything — sunflower oil or canola oil or anything that doesn't taste like a whole lot. So we use grapeseed oil, and, really, it's less about the flavor and more about the heat. Just a couple drops will, like, blow your brains out.

What does it taste like?
Hot! It's like eating a jalapeno. The cool thing about it is, you just put a few dots around. So you can't really see it, because there's also olive oil on top, and one little drop is enough to let you know that it's there.

So, itâ€™s kind of fun as youâ€™re eating it. You're like, “Ghost chili oil? That sounds terrible.” And you take a couple of bites and you don't feel it. And then, all of a sudden, you feel it. And then it kind of goes away. It's really nice in the oil because it's not super [hot]. It doesn't make your tongue hurt. If you bite a habanero, it would make your tongue hurt. This doesn't do that. It's just really spicy.

We used to use ghost chili oil in our tomato dish, but we took [the dish] off [the menu] because tomatoes suck right now. [Now we use it] in the mesquite-grilled Texas quail dish, which has chorizo and pancetta stewed with fingerling potatoes, ghost chili oil and Texas quail. We used to have peaches on the quail, but those are also out of season, so it was time to change both of them. It makes it fun to eat, and it brings that heat element.

Why did you decide to feature this wild ingredient?
Because it's fun! And I like people to ask questions and have fun when they're eating. This is definitely a fun thing to do. People ask about it all the time. Yeah, they have no idea what it is, so it gives our waiters, like, a point to talk about, and it's fun to eat. Especially because, as you're eating, it's not necessarily gonna be in the first bite, and you're like, “Wow, where's the ghost chili oil?” And then you find it, and then it's — I donâ€™t know, it's fun.

What makes having this item in your kitchen special?
Because it's the hottest chili! Ghost chili is hotter than the habanero. It's more about the heat, and you can kind of sneak it in. It's not like there's jalapeno in it; there's not an actual pepper. It's just a drop of oil, and the oil's been strained, so all the heat is in the oil. So, it's fun because you can put drops in different places and, as people are eating it, they're kind of surprised.

Dried, ground ghost chili. Van Camp says he used to get fresh peppers, but started using this alternative because he couldn't use a whole case of ghost chilis.

Grapeseed oil is poured into a bag that contains dried and ground ghost chili. This bag will be vacuum-sealed and cooked sous vide-style for about an hour and a half to infuse the oil.

Van Camp pulls out fresh, julienned scallions that are stored in ice-cold water.

Van Camp working the quail on a blazing hot grill.

Dried, ground ghost chili next to a bottle of ghost chili oil (left). The young chef picks scallions to garnish the dish (right).

Van Camp adds just a couple of drops of the ghost chili oil to the dish.

He then finished off the dish with fresh chives.

A close up view of the spicy oil on the plate. 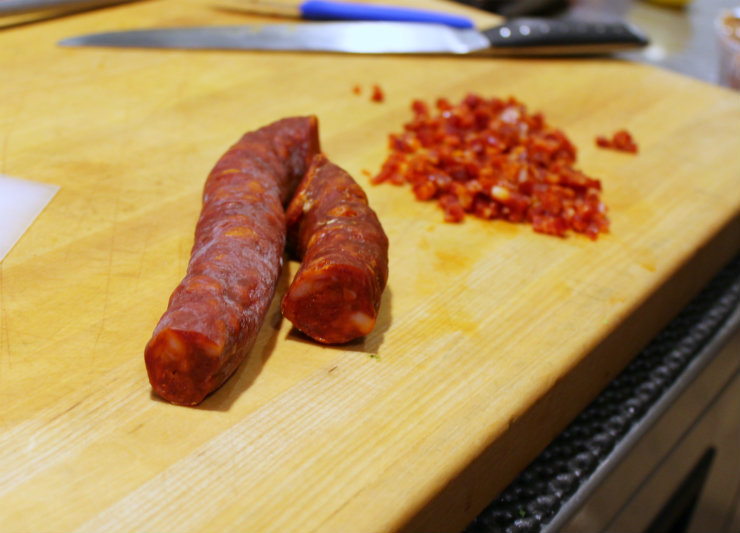 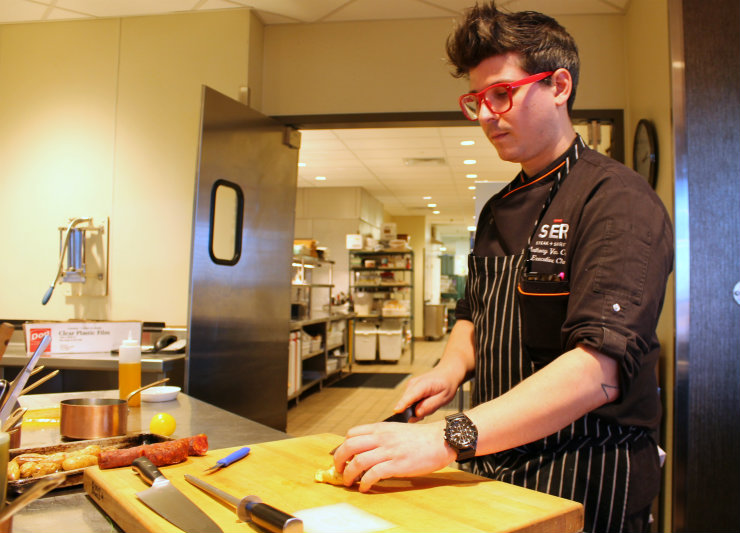 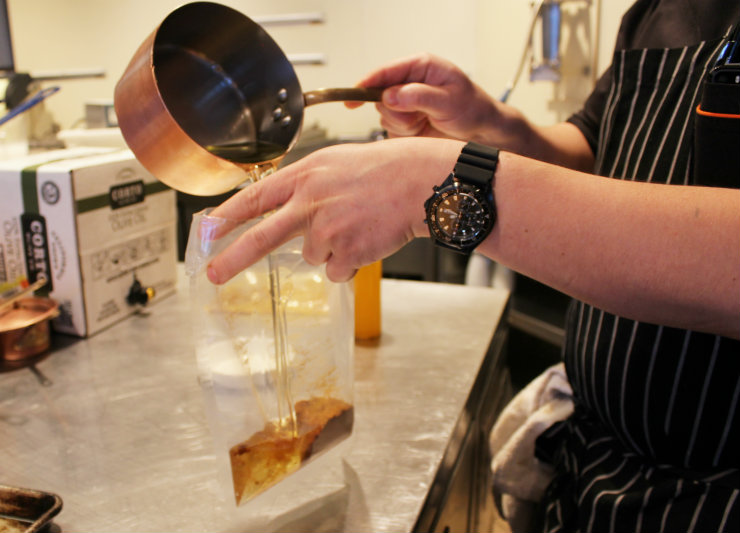 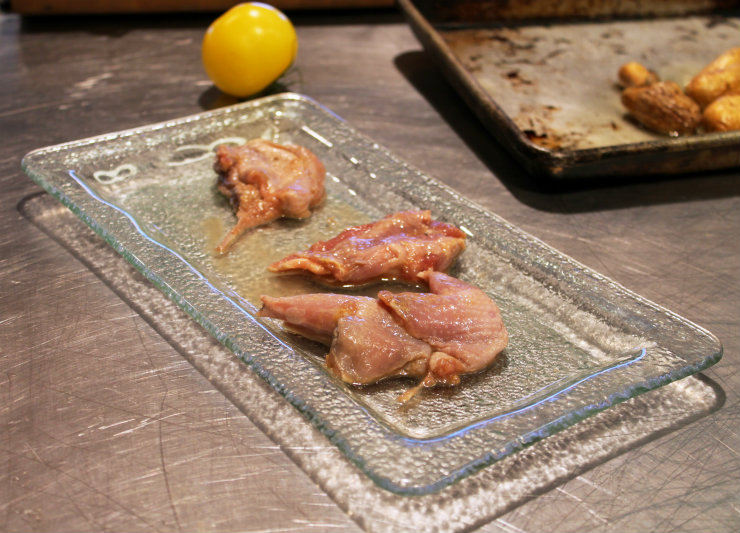 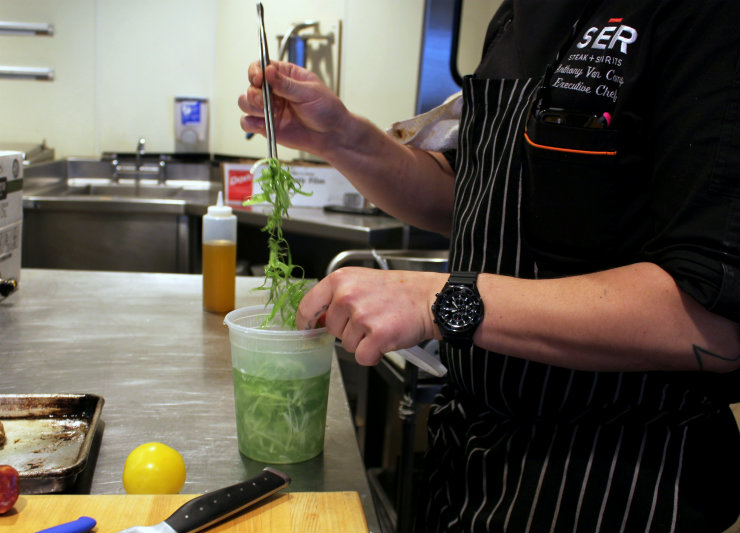 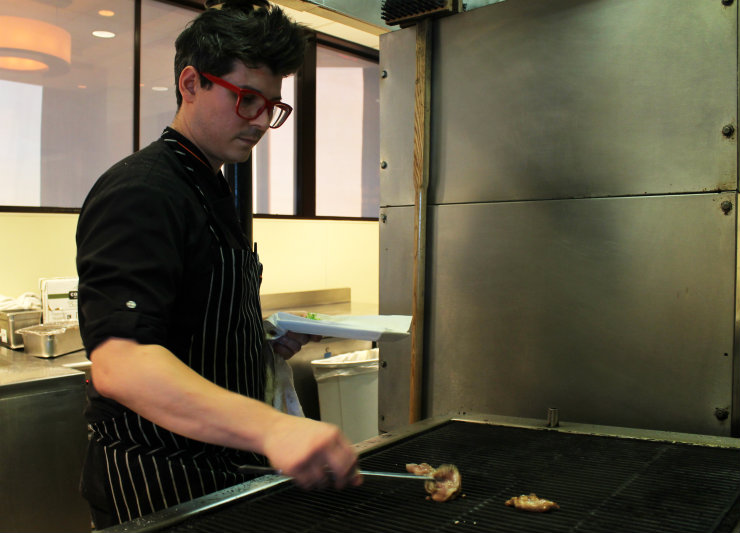 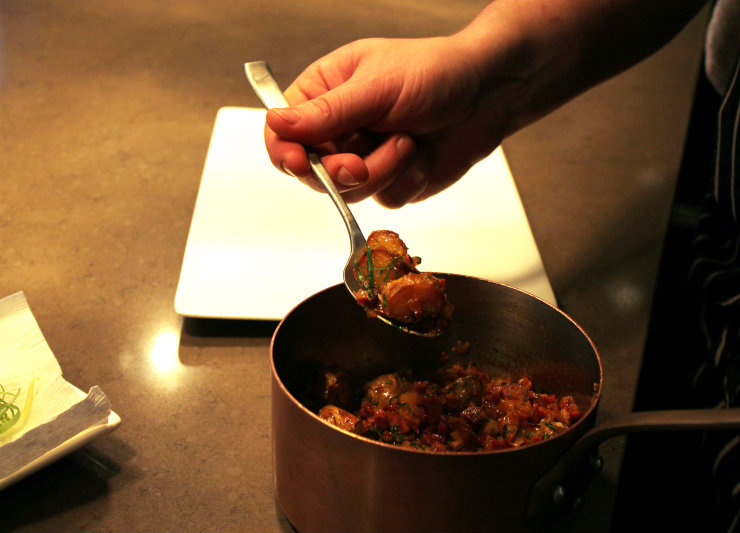 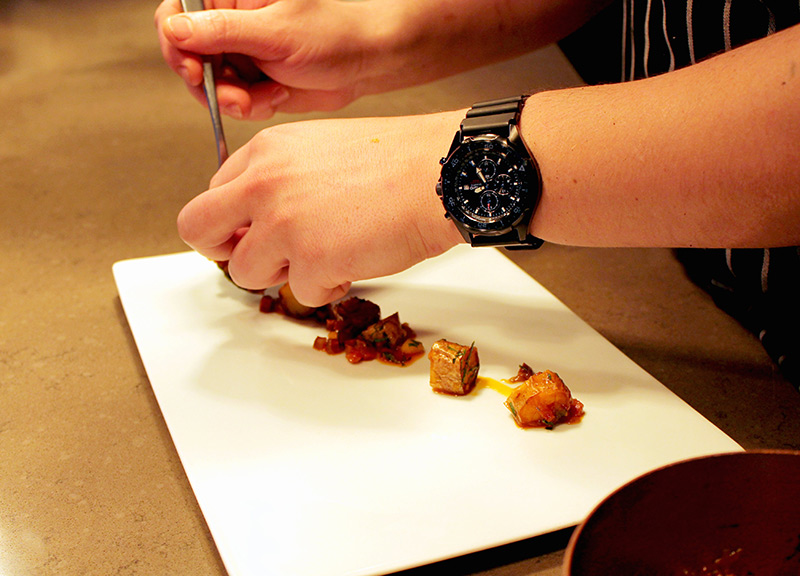 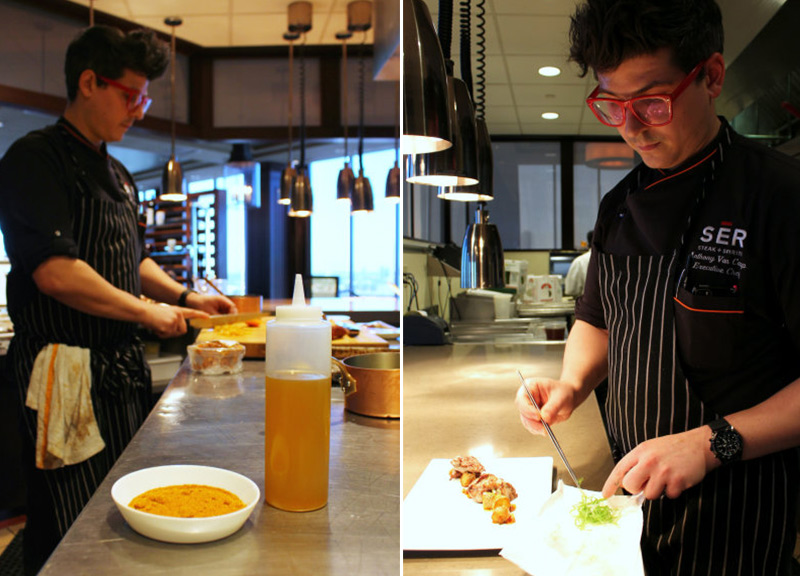 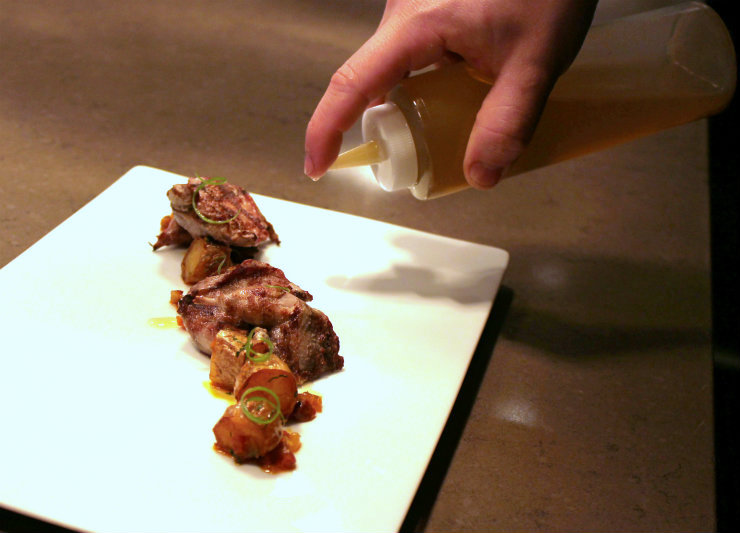 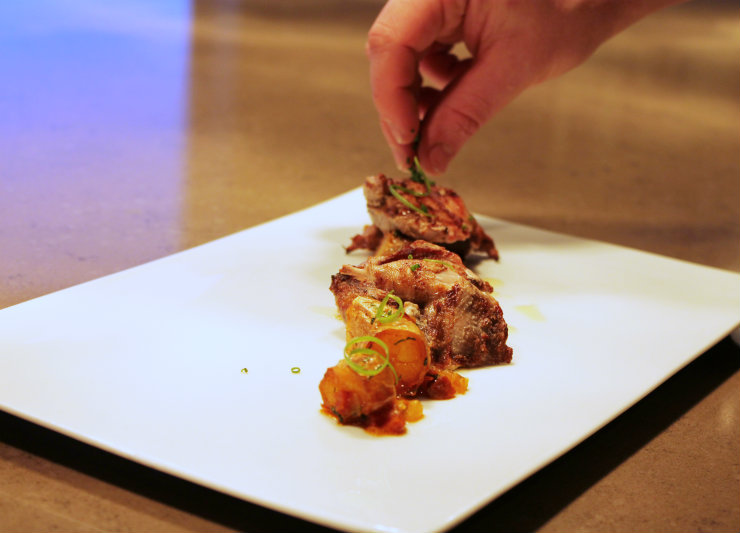 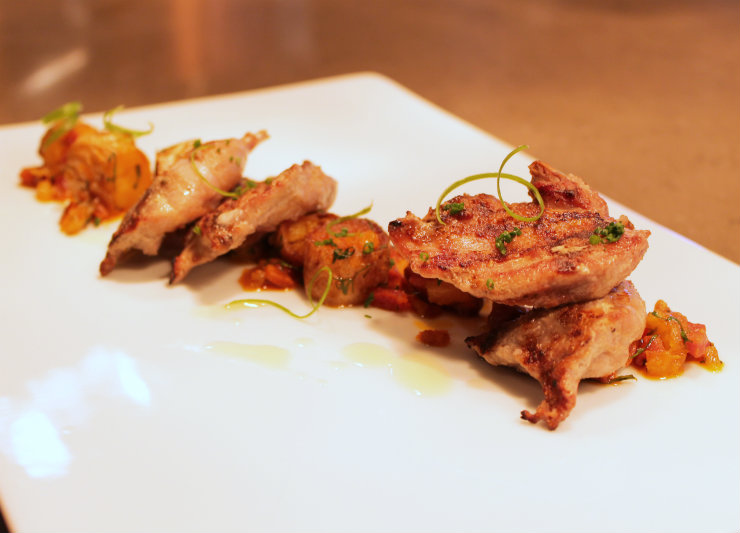 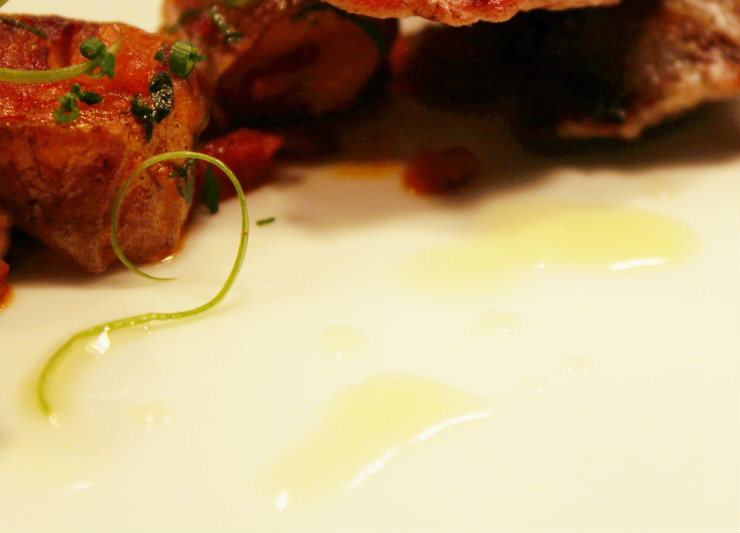 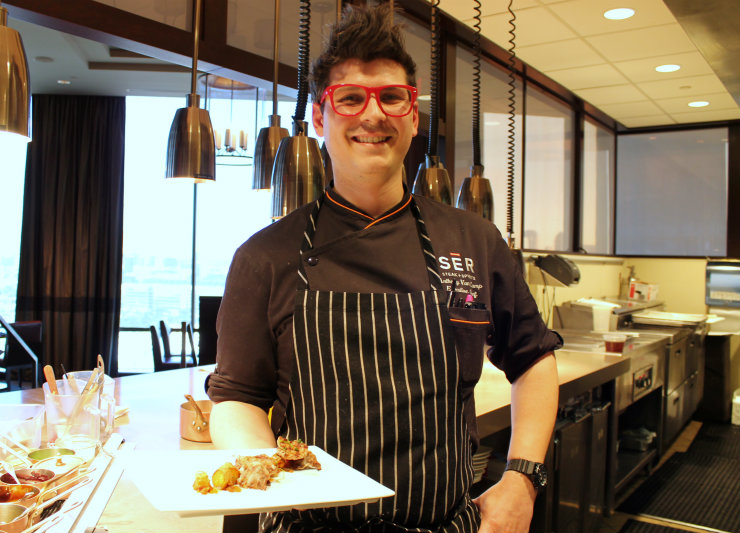