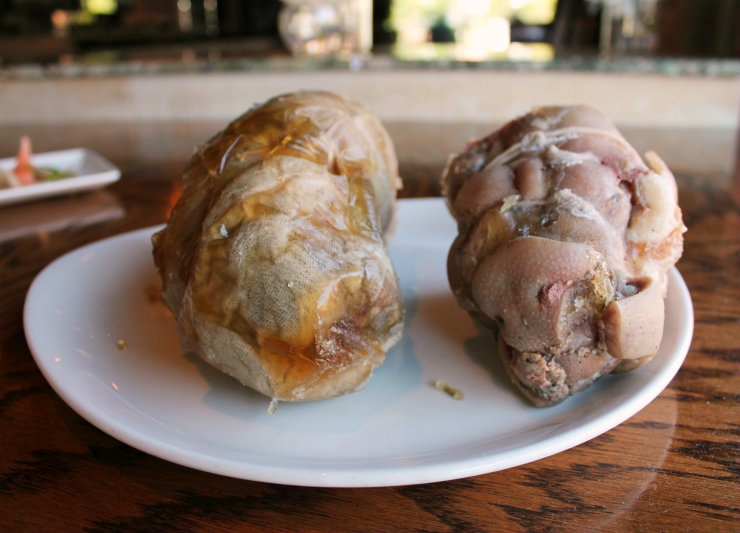 Pig Heads Might Seem Weird, But Oak's Richard Gras Says They're The Tastiest Part of The A

Welcome to Wild Things, where we dive into the kitchens of some of Dallas' most daring chefs to find out what wild, interesting ingredients these food artists are playing with. Whether it's a taboo ingredient or just a food item you wouldn't think you'd find at a certain establishment, it's about time someone highlighted the unconventional or unexpected. Here, we invite you to open your mind — and your mouth — to the wild things in Dallas dining.

For this week's Wild Things, we sat down with Richard Gras, executive chef of the Design District hot spot, Oak. Gras has only been with Oak for about three months, but the 34-year-old chef's creative techniques and whimsical execution is already making waves in the Dallas culinary scene.

He's certainly got the experience to justify that clamor. But after having worked at various Ritz-Carltons in Florida and California, as well as J&G Grill at the St. Regis Bal Harbour Resort, Oak represent's Gras' first job where he truly get to “be free” and explore his passion for food.

And, below, Gras tells us about the wildest food in his kitchen, which happens to be an old Italian favorite and which certainly embodies his new model.

What is the wildest ingredient in your kitchen?
Right now, it's probably the porchetta di testa. Basically, porchetta di testa is a deboned pig's head that is rolled back up into the skin of the head, seasoned, rolled in cheese cloth and then sous-vide for 17 hours. Sous-vide is basically cooking in a Cryovac. A Cryovac basically removes all the oxygen and it makes a tight seal. So, what it does, you place the head into the bag, you put it into the machine and it basically vacuum seals it. One of the biggest things [causing spoilage] is oxygen, so that removes all the oxygen [and] makes a really tight seal. [It] helps to mold it, also, and then you cook it without oxygen. What that does is it allows the proteins to coagulate at a certain temperature to tenderize it without losing a whole lot of yield. If you did this and you braised it, it would probably be 20 to 30 percent smaller. In sous-vide, there's no oxygen — there's no nothing — so you're basically cooking it in its own liquid for a long period of time.

The gelatin — that's all natural — that comes right out of the animal itself. It's not fat, it's gelatin. It basically from the cheeks, the nose, the cartilage breaking down, and basically jellifying on the outside. So, it's like pork Jell-O.

It's a lot different than other people think. When they try it, they're like, “Oh my gosh. I don't believe that an ear could taste that tender!” or “I've never had pigâ€™s tongue before!”

What does it taste like?
It tastes like the best pork you've ever had. It's not overly seasoned a whole lot. We just use a little bit of herbs, spices, salt and pepper. It's just this concentrated pork flavor. If you love pork, this is one of the things that you'll love. It's just an interesting way to pull many flavors out of the cheeks, the ears and the nose and combine them all in one. It's just like an extreme porky flavor that's just so delicious. It's melt-in-your-mouth tender.

These are red wattle pigs, so they're local. The farmer puts a lot pride making sure these [red wattle] pigs are raised well, so that the finished product is much better. It's got a little bit more fat on it. The marbling is a little bit better. The meat's a little bit darker because of what it's eaten, so that the flavor at the end of the day is much better. That's time, that's effort, that's care, from his side. When I get it, I'm gonna put the same care and time into it to make sure that, y'know, that animal died for something. I'm gonna make sure that he died for a great cause.

Why did you decide to feature this wild ingredient?
It's just something that's very unique, and it's kind of like what we do here. We do things that are not necessarily in the same line as a lot of restaurants in Dallas. We want to be different. I don't want to be the same as the guy down the street. I want to be doing some things that are not mainstream, to make us different, and I think this is one of those things.

Coming into Texas, I didn't know what to expect. One of the purveyors came in and said, “Hey, I can get you red wattle heads.” I'm like, “What the hell is a red wattle?” I didn't know. So, I got the heads in and I was like, what better to do than [porchetta di testa]. It's something I hadn't done in a long, long time. It's one of those things that you learn at the beginning of your career and you forget it for a little while because you're so caught up with trying to do what you want to do. This is kind of like a reflection of the past for me. It's like going back to what you learned in the beginning.

The reason why I wanted to feature it is because it's local, for one, and that's a big deal for me. But, also, [I wanted to] bring something to our guests that maybe they can't get somewhere else. [Something] that is gonna keep them coming back for more and keep them interested.

What makes having this item in your kitchen special?
First of all, it's different. I mean, I don't think thereâ€™s anything that I've seen [like it] in Dallas. I've only been here for three months, so I could be very wrong. It's just uniqueness of the preparation. It's the flavor of what's on the plate. It's the tradition behind it. It's the newness of the old, y'know? It's a very classic thing that we've kind of put a new spin onto. It's just who we are.

This is a great product. It's a killer charcuterie, and that's kind of what I represent, too. It's the local movement. It's doing something that's different. It's kind of going off the beaten path to deliver your guests with a unique, memorable experience through the pork head.

It's a badass piece of charcuterie. It's just one of those things that, when you eat it, it makes you happy. I guarantee you anybody who comes here and has this, it's gonna make them happy.

Porchetta di testa. The half on the left is still wrapped in cheese cloth and covered in “pork Jell-O.” The pig's nose can clearly be seen on the half on the right.

Porchetta di testa. Can you make out the pig's face, including the nose and the skin around the eyes, on the half on the right?

The good-looking side of porchetta di testa. Gras explains how to prepare porchetta di testa:
“It takes about 20 minutes to prepare, if you want to do it well. You basically start at the chin and you make a slit all the way down to the neck, and from there it's like working from side to side. You peel it until you hit the top of the head and then you pull it forward, so that you get the nose and everything off. From there, you take the tongue out, because that's not something that you can leave attached. The ears will come off, too. [The skin] is basically butterflied, like a turkey breast, and you lay everything in there. You roll it up, tie it and wrap it in cheese cloth.”

A side view of porchetta di testa still wrapped in cheese cloth and covered in natural pork gelatin. Gras says he gets eight heads about every three weeks, which produces about 16 orders.

A close-up of porchetta di testa prepared for the house made charcuterie board. The meat is topped with olive oil, lemon, salt, pepper, pickled beets, charred fava beans, radish slices and piave cheese.

Another angle of the charcuterie plate. Gras says everything on the plate takes the eater on a flavor-packed journey: “The pickled beets have a lot of acidity to help cut through some of the fat. The burnt fava beans help to give you that kind of, like, almost bitter flavor, but because there's a good amount of fat in the head, it just works really well. We always have some kind of pickled veggie that goes on our charcuterie board. We use a lot of local vegetables, like, from Comeback Creek [in Pittsburg, Texas]. He'll have okra and I took 10 pounds of okra and I pickled it.”

Executive chef Richard Gras with his kitchen's prepared porchetta di testa, a portion of the “House Made Charcuterie” board, $24. 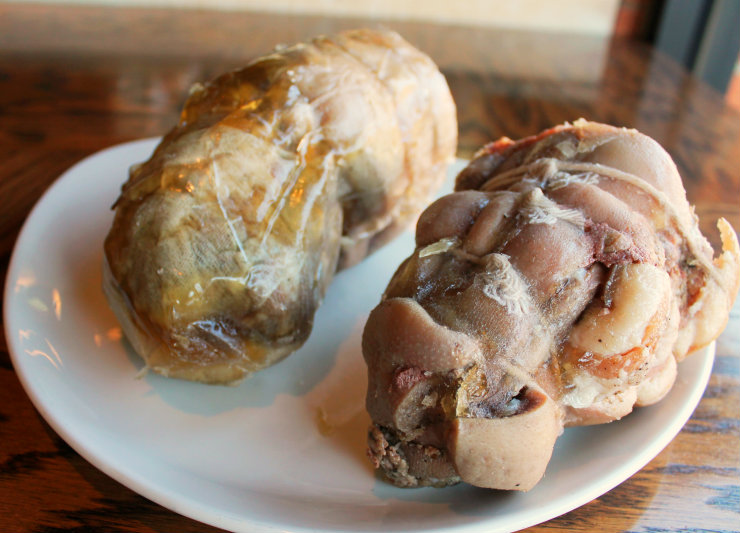 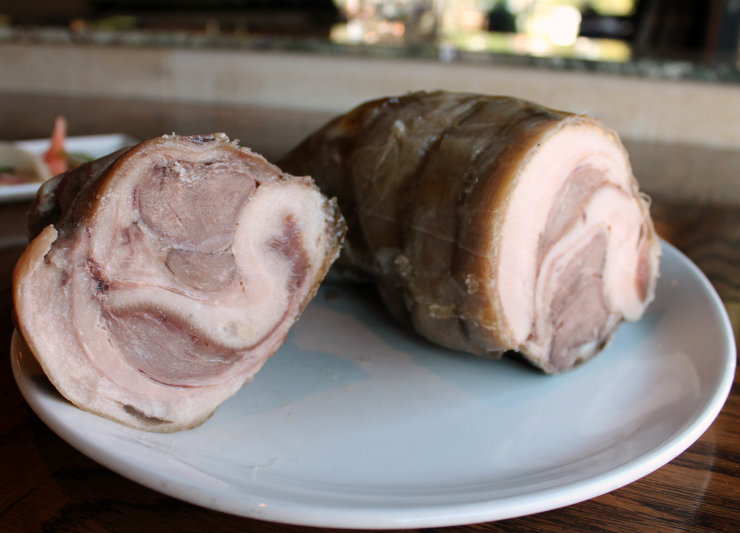 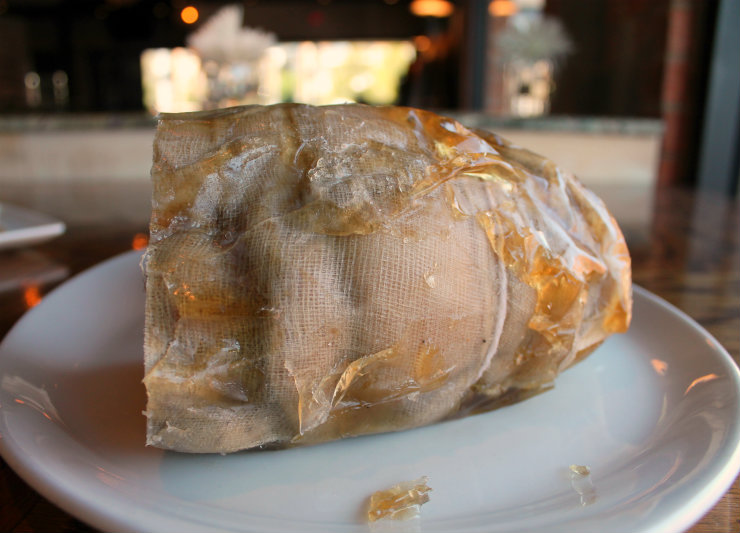 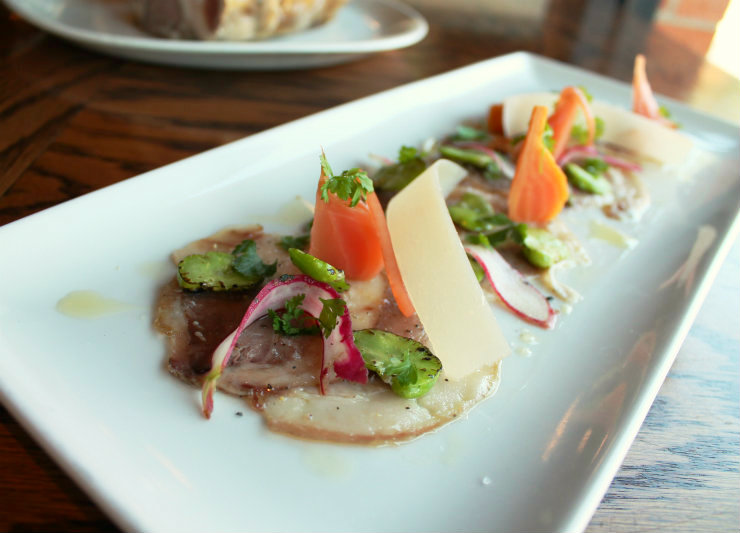 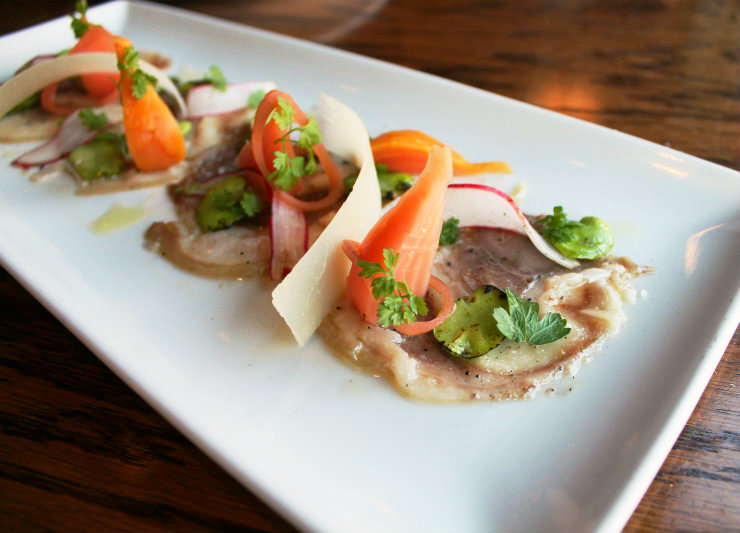 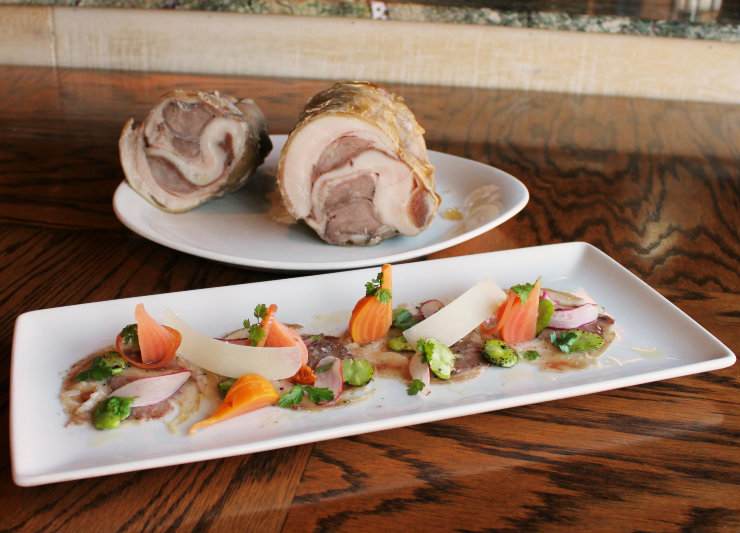 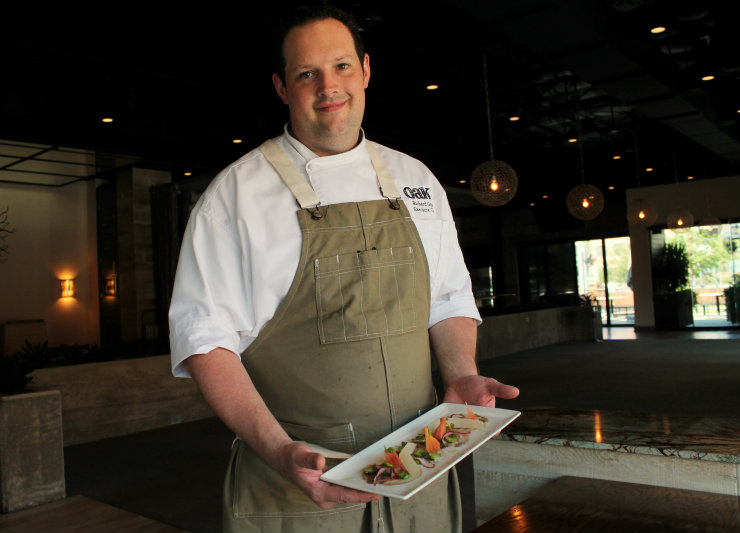