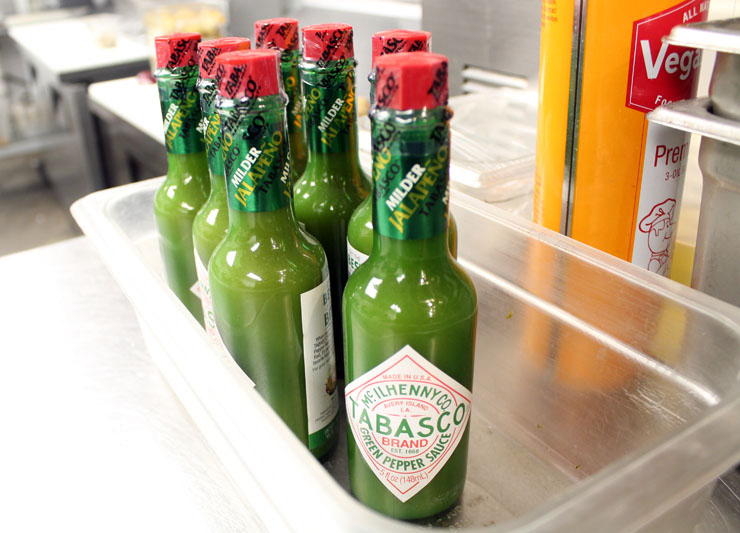 We've All Had The Secret Ingredient at Boxwood. We Just Don't Use It The Same Way.

Welcome to Wild Things, where we dive into the kitchen of some of Dallas' most daring chefs to find out what wild, interesting ingredients these food artists are playing with. Whether it's a taboo ingredient or just a food item you wouldn't think you'd find at a certain establishment, it's about time someone highlighted the unconventional or unexpected. Here, we invite you to open your mind — and your mouth — to the wild things in Dallas.

Executive chef Jason Wade has been rocking the Boxwood Tap & Grill kitchen since the establishment took over the old Thomas Avenue Beverage Company space back in July. And the 36-year-old truly loves it — so much so that he doesn't mind the fact that he left a lucrative computer-based career for a life in front of the stove.

Wade, who considers himself a Texan even though he was born in Kansas, grew up in San Antonio, where he says he cooked “out of necessity” because his parents worked around the clock. Starting from the time he was in junior high, he was responsible for most the family meals. After high school, he spent four years in the military. And, even though he worked on computers during his time in the U.S. Navy, he made friends in the kitchen and even had the luxury of preparing his own meals if he didn't like what the kitchen put out.

And though he admits the well-paid, software-based career he landed in San Diego in the wake of his service was relatively easy, he says he yearned for a challenging and much more enjoyable profession. He wanted to do what he loved for his career.

So he came to Dallas, where his family was living, and enrolled in the Art Institute of Dallas.
And, there, his drive, ambition and discipline shined at the school's culinary arts program. Wade completed two separate two-year-long associate programs at the Art Institute in just a little over two years total — all while working a part-time job in the morning and full-time job at night.

His first restaurant job after school was at Mercy Wine Bar in Addison. Since then, he's worked the kitchens at Whiskey Cake in Plano and Cafe 43 at the George W. Bush Presidential Center. And though Wade has a background in fine dining, he created a straight-forward, neighborhood bar-type menu for Boxwood Tap & Grill. Given the eatery's close proximity to other pub-like establishments, he wanted his space to have a “neighborhood bar-friendly menu that was a little more elevated.” He kept bar fare in mind when creating the menu, but also focused on quality ingredients and big flavors.

And Wade's ingenuity and enthusiasm for flavor-packed cuisine inspired his usage in developing complex flavors from a simple product. That product? Tabasco's Green Jalapeno Sauce.

Wade's unconventional use for this condiment — the somewhat lesser-known cousin of the original red Tabasco — is the secret wild ingredient in many of Boxwood's most-popular items.

In the following interview, Wade discusses how he uses the wildest ingredient his kitchen in the restaurant's most popular brunch item.

What is the wildest ingredient in your kitchen?
Here at Boxwood, in our kitchen, it's probably the green jalapeno-flavored Tabasco.

For those who haven't had it, how does the green sauce differ from the red?
It's based with jalapenos, so it does have a predominant jalapeno flavor. But I like it because it seems to have a little bit of an effervescent effect. It adds enough acidity to something, but it's not as tart as a lime or lemon would be. So it gives it a little bit more balanced, a little bit more mild acidity than adding lemon or lime juice or a really tart vinegar of some kind. It brightens and helps bring out more flavors than just adding a pinch of salt into a dish. It really helps add a little bit more flavor than just a chopped-up jalapeno or something. But it's not too strong. With the little heat that it does add, it's a little more subtle, kind of on the back end of your palate, instead of being so spicy that it really hits you up front. It's a slower-building spice, so it's more enjoyable.

Why did you decide to feature it so heavily in your menu?
The first time I ever tried it was about three or four years ago at another restaurant. I happened to see a bottle, and I had never tried it before. Even though I grew up in San Antonio, I'm not a big fan of things that are too spicy. But I do love serranos and jalapenos. One day, I tried experimenting with it to add it to a vinaigrette, and it just had a really nice, unique flavor. It just brightened it up in a way that didn't add a whole lot of spice. So then I just started experimenting and using it in multiple things. And now it's a very common ingredient that I kind of gravitate towards to adding unique flavors into vinaigrettes or sauces or even gravy. Now that I know what kind of flavor it has and what it can do when it's combined with other things, it's nice to use the Tabasco in an unknown way. Most people just take Tabasco and use it as a topping on a food item they're having — like a taco or whatever. But I very rarely use it as a topping ingredient. I use it more as a base ingredient for building flavors in a dish. I like using it more as a foundation-builder instead as a final topper on a dish. Like, if you're putting it just on top of something, then that just kind of tends to be overpowering. But if you're using it as a base flavor to build upon, I think it helps make a sauce or vinaigrette or marinade or something more creative or flavorful.

What makes having this item in your kitchen special?
I'd be willing to bet that most places just offer this Tabasco as a topper or finishing sauce. I think that's why it's kind of unique to use it in some of the food that we have here. I get comments from guests about a dish [that features the Tabasco] all the time. They're like, “Wow, that's so good!” or “It's unique!” or they want to ask about the flavor or ingredients. It's all because I'm using the Tabasco in the back end and they don't know it. I don't put it out on the tables, so it's not offered out on the tables as a finisher. I just use it in the kitchen. It's kind of my little secret ingredient just to surprise guests.

Bottles of green Tabasco sauce. This is the “secret ingredient” in 10 of Boxwood’s menu items.

The secret ingredient is added to the made-from-scratch country gravy.

After frying diced fingerling potatoes with chopped red and green peppers and red onion, Wade tosses the potato mix with salt, pepper, butter and a dash of green Tabasco.

A close-up of the potatoes and veggies.

The chef slices a freshly-made cheddar biscuit to start plating the dish.

A healthy serving of Wade's gravy is about to be ladled on this close-to-finished plate.

The plate is finished off with two slices of bacon, fresh green onions and a sliced strawberry.

A look at Boxwood Tap & Grill's most popular brunch item, “The Southerner.” 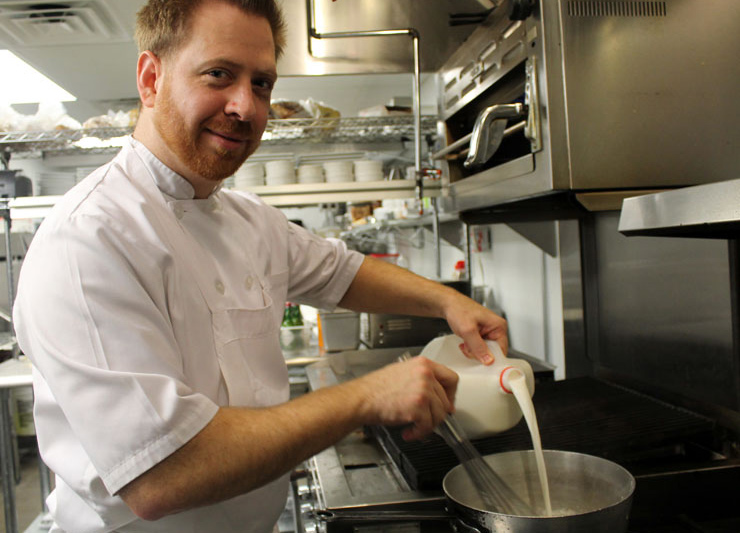 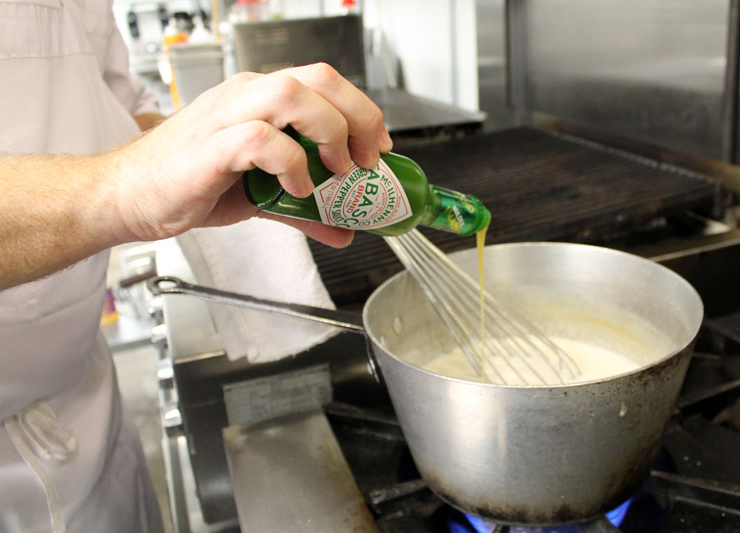 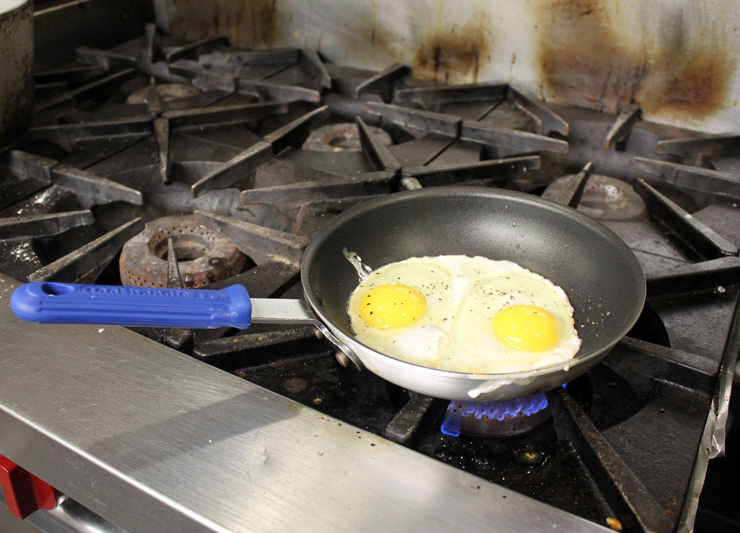 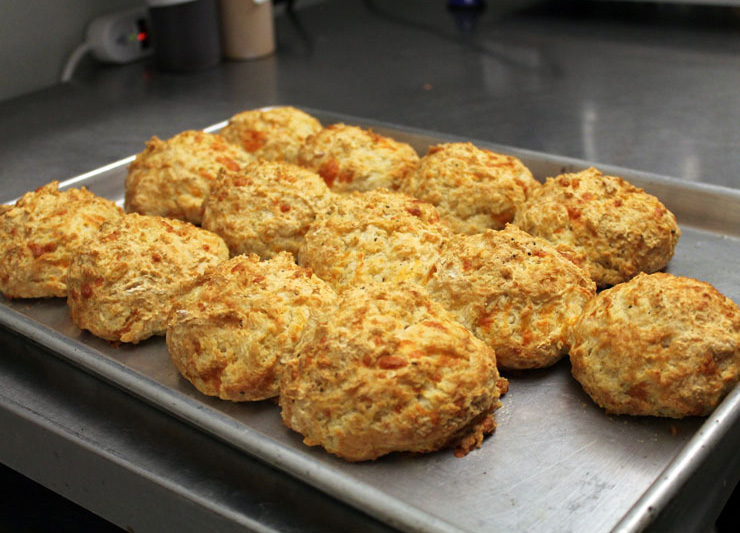 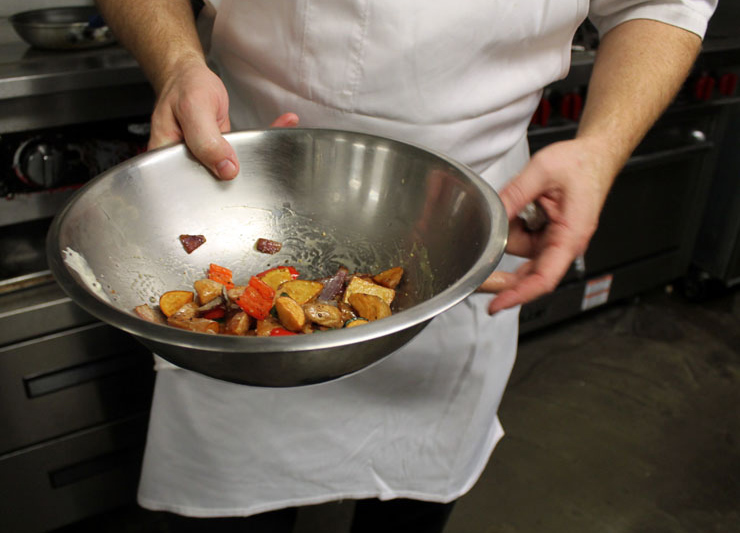 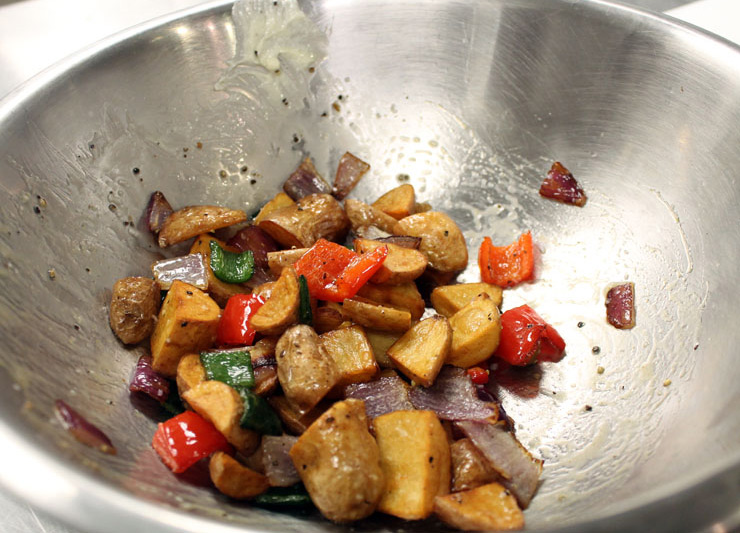 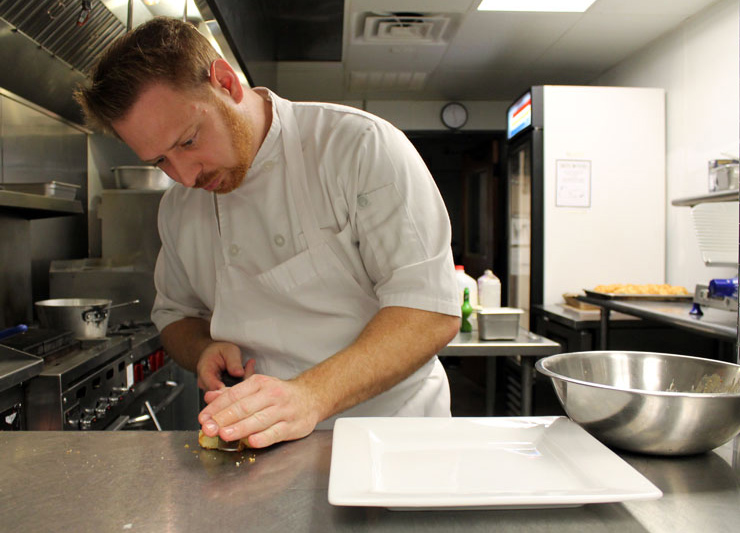 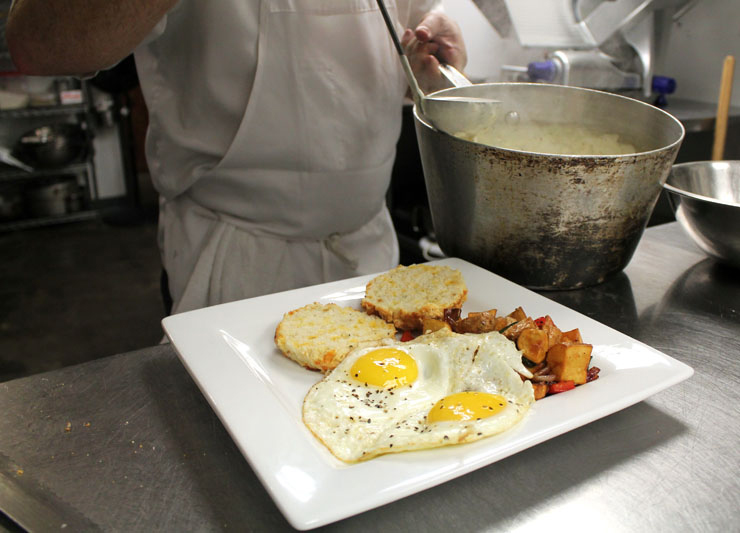 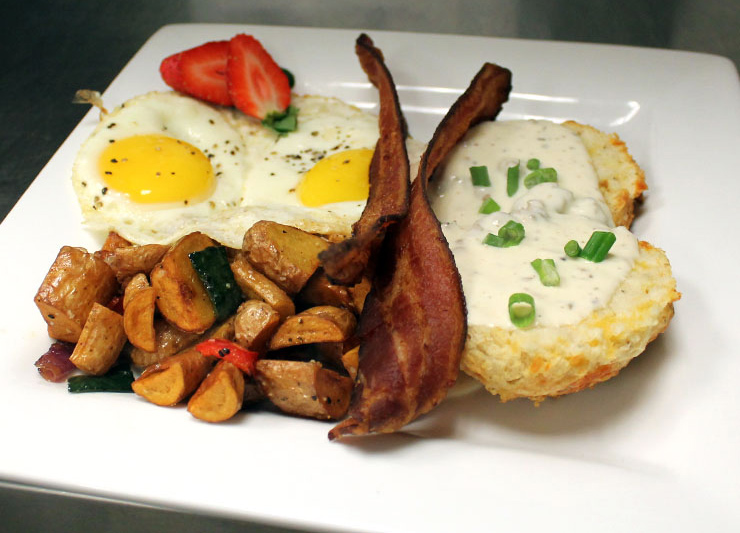 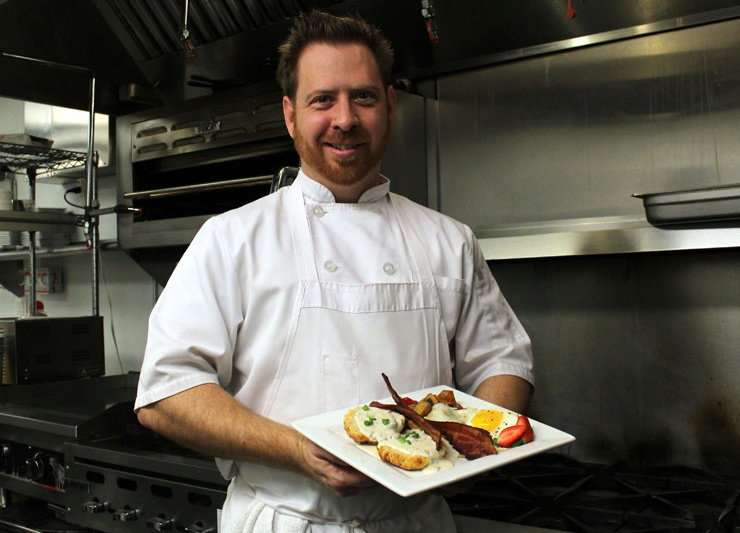 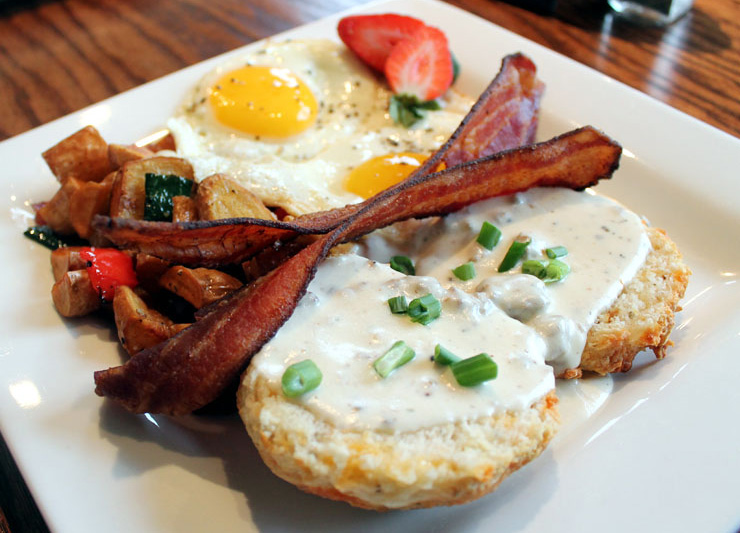