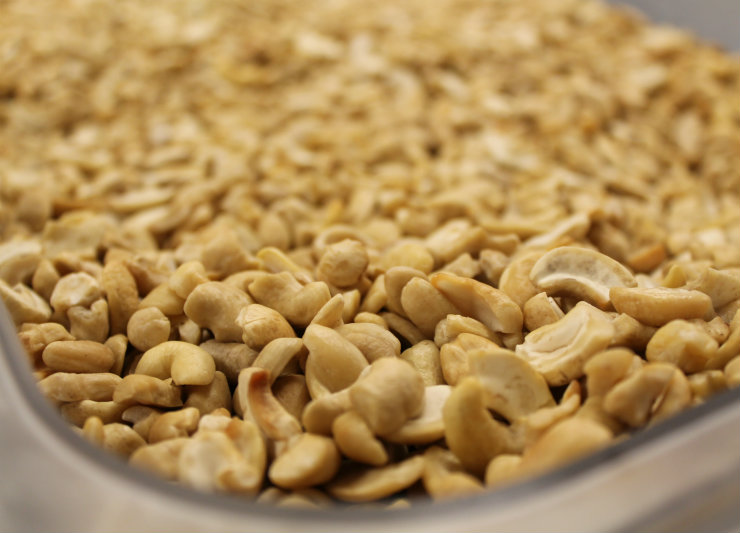 Welcome to Wild Things, where we dive into the kitchen of some of Dallas' most daring chefs to find out what wild, interesting ingredients these food artists are playing with. Whether it's a taboo ingredient or just a food item you wouldn't think you'd find at a certain establishment, it's about time someone highlighted the unconventional or unexpected. Here, we invite you to open your mindâ€”and your mouthâ€”to the wild things in Dallas.

Ask anybody in Dallas what the go-to vegan joint around is, and the response you'll hear will most likely be Spiral Diner & Bakery.

What began as a small lunch counter at the Fort Worth Rail Market is now a two-location, well-recognized establishment that has been named as one of America's top vegan restaurants, and with good reason. Spiral Diner & Bakery has been cooking up tasty, comfort vegan food since 2002.

Founder, “overlord” and chef Amy McNutt opened the first location in Fort Worth in order to fill a culinary void in North Texas. McNutt, a Southlake native, had always had an interest in food and a love for animals. She left Texas to study film at the University of Southern California, where she was exposed to the vegan lifestyle. Although she arrived to California as a vegetarian, she made the switch to a vegan diet after educating herself on animal welfare issues and experimenting with vegan cooking. Her interest in vegan cuisine pushed her to spend a lot of time at many Los Angeles-area vegan restaurants, talking to managers and, as she says, “watching and learning.” After graduating from USC and spending a year in L.A.'s film industry, she returned to Fort Worth with a goal to open a restaurant.

Even though McNutt is a home-trained chef, she spent a year perfecting recipes for Spiral's menu. Both she and her husband, James, created the menu and “learned through trial and error.” She credits the vegan lifestyle as the real reason she got into cooking; discovering new foods and ingredients used in vegan cuisine inspired her cooking and fueled her passion.

Since offering her creations to the public and opening Spiral, it's become one of the most popular vegan restaurants in the Dallas-Fort Worth area. The success of the establishment led to opening a second location in Oak Cliff, run by Sara Tomerlin, and a change in McNutt's role at Spiral.

In 2008, McNutt granted longtime manager, Lindsey Akey, ownership of the Spiral Diner & Bakery in Fort Worth. Now, McNutt and her husband, who is also a filmmaker, have time to pursue their other passion: film. The two are currently in the process of opening a movie theater.

Now, even though McNutt isn't in Spiral's kitchen every day, she remains the creator of most of the restaurant's delicious menu items. Below, she discusses what she believes to be the wildest ingredient in Spiral Diner & Bakery's kitchen — a multipurpose nut that can be transformed to mimic many foods, including an award-winning cheese.

What is the wildest ingredient in your kitchen?
Cashews. It sounds simple, but it's surprisingly versatile, especially for vegan cooking. I think that it's surprising how many ways you can use cashews. They're so rich and they blend up so smoothly. You can use them to replace things like heavy cream, cheese. Anything that you would traditionally get a really rich flavor from, cashews are a really good alternative.

At Spiral, one of our most popular items is our nacho cheese, which is cashew-based. We use whole, raw cashews — you definitely want to use raw cashews because once they're roasted, the flavor changes. If you're going for a cream-type flavor, you want to use raw. We sell it mostly on our Nachos Supremo, which is like the best thing ever. It's just a big ol' pile of nachos, with the cashew nacho cheese, quinoa, black beans, veggies, sour cream and guacamole.

It's pretty decadent. It's definitely a special treat kind of item.

What does it taste like?
Well, the nacho cheese ends up tasting almost like ballpark nacho cheese, like good ol' fashioned, super rich, creamy [cheese]. But it tastes a little bit better than that because the ballpark kind is all hydrogenated oil, crappy milk product — y'know, like bottom-of-the-barrel milk product. So, this is a very high-quality [cheese]. Obviously, cashews are very expensive and very tasty, and we don't use any fake ingredients in our nacho cheese. It really does mimic that ballpark-style nacho cheese, but without making you feel like crap after you eat it.

Why did you decide to feature this wild ingredient?
Just because it really surprises people. And they're so versatile. I mean, we get the most comments from people who do eat at Spiral for the first time. We always push the nachos because they're one of the most impressive things for someone who is not vegan, who is eating their first vegan meal ever and used to eating comfort foods — burgers, fries, nachos and stuff like that. This shows them that you do not have to sacrifice taste to be vegan.

I think people are really surprised when they taste the nacho cheese. First of all, if you didn't tell them it was cashew-based, they would probably assume it was some kind of silken tofu or some sort of base like that. Until you tell them it's cashew-based, they can't really place the flavor because cashews are so versatile. People are just really surprised that a) vegan food can taste so good, and b) that that's what our nacho cheese is made of.

What makes having this item in your kitchen special?
I think because it gives people something that they're used to, like nacho cheese, but in a cruelty-free way, and it kind of opens the door for them to maybe explore some other things on the menu. It proves to first-timers that we know what we're doing and that we know how to make food taste good, even though itâ€™s all plant-based.

As far as cooking cashews and making them into a cooked cheese sauce, I can't think of anywhere else that does that [in North Texas]. We use cashews for other menu items, too. We use them in our raw desserts. We have a raw chocolate torte and a raw key lime pie. We use them as a cream substitute in our tomato bisque soup. It adds that little bit of richness that you get when you splash a little cream into any soup like that. We also use cashews to make a parmesan cheese that we sprinkle on all of our pasta dishes.

Corn chips get a healthy drizzle of Spiral's nacho cheese on top.

Quinoa and black beans are featured in the Nachos Supremo to take place of the meat that's traditionally served with nachos.

The quinoa-black bean mix is cooked down in a hot skillet.

The hot quinoa-black bean mix is spooned on top of the cheesy nachos.

The toppings are added to the Nachos Supremo plate one by one.

A close-up of the finished Nachos Supremo plate.

A close look at the texture and appearance of Spiral's cashew-based nacho cheese. 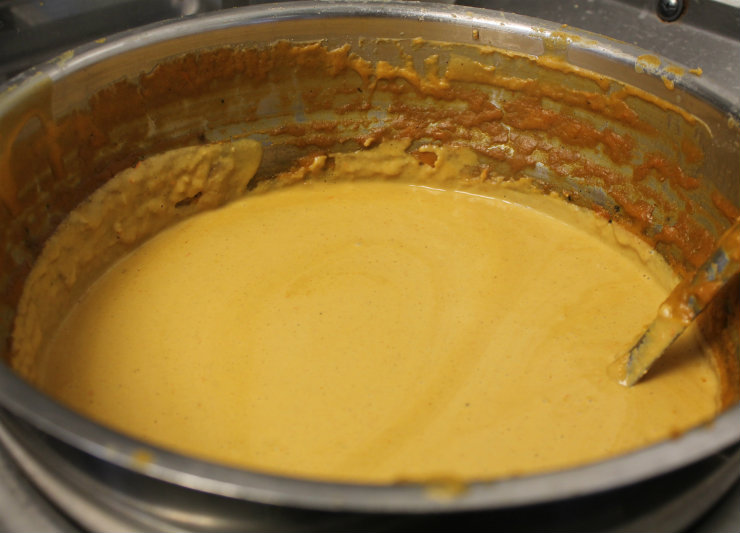 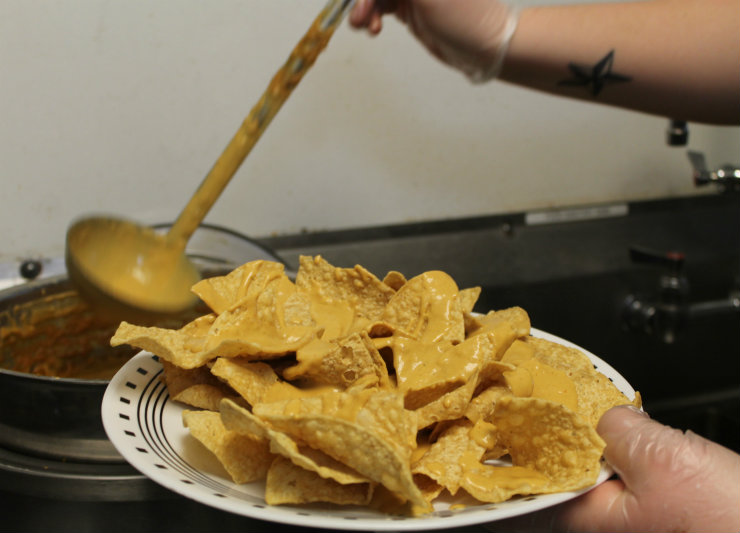 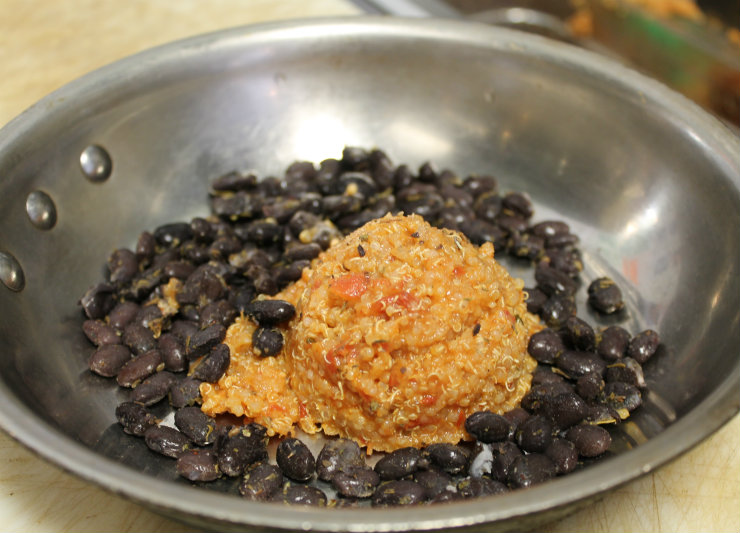 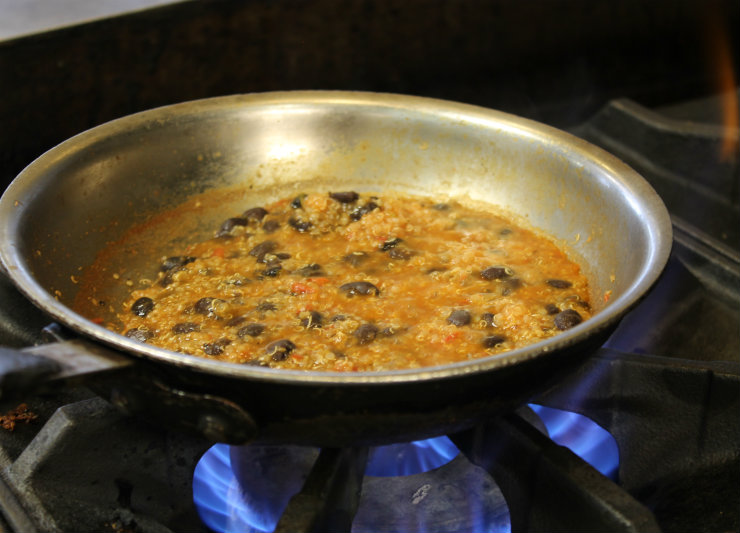 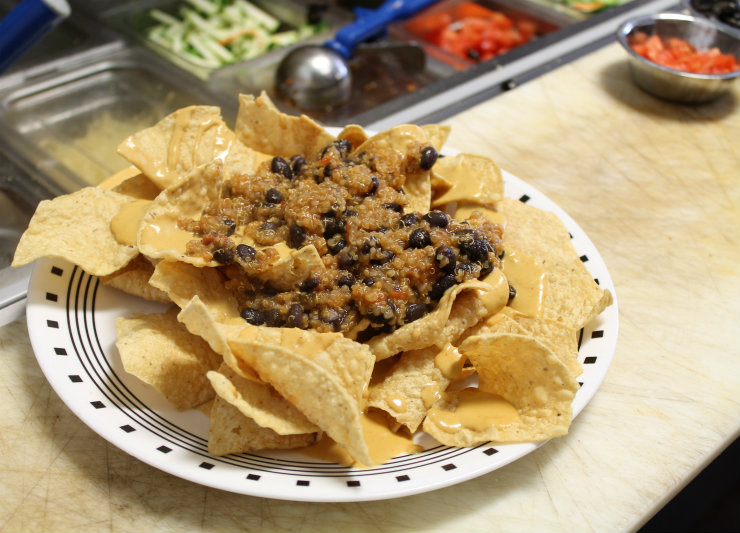 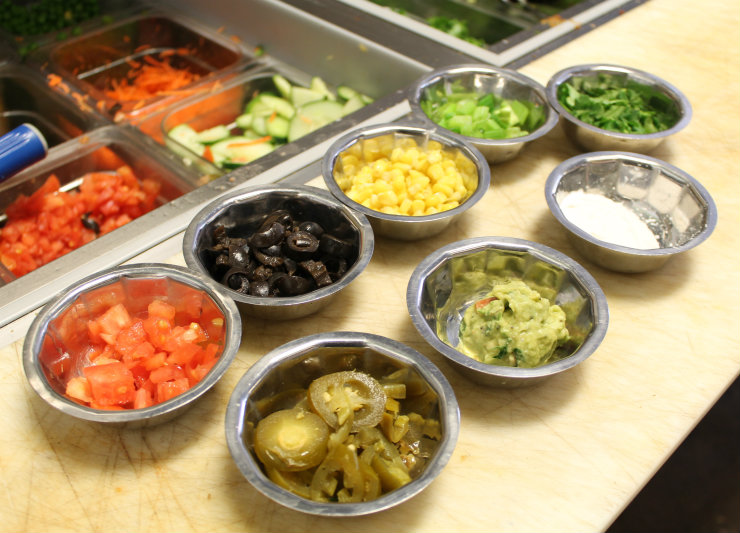 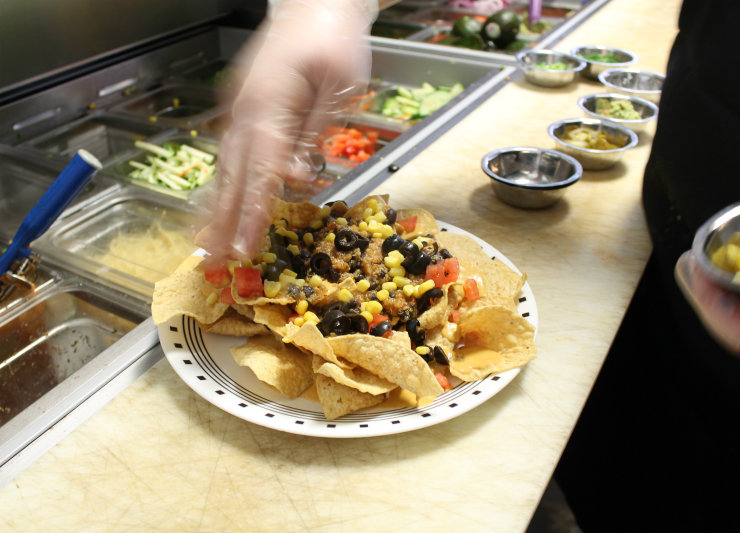 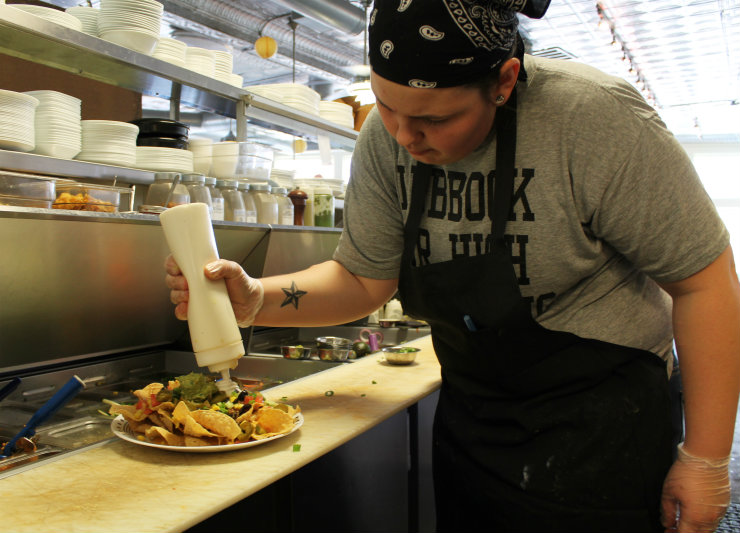 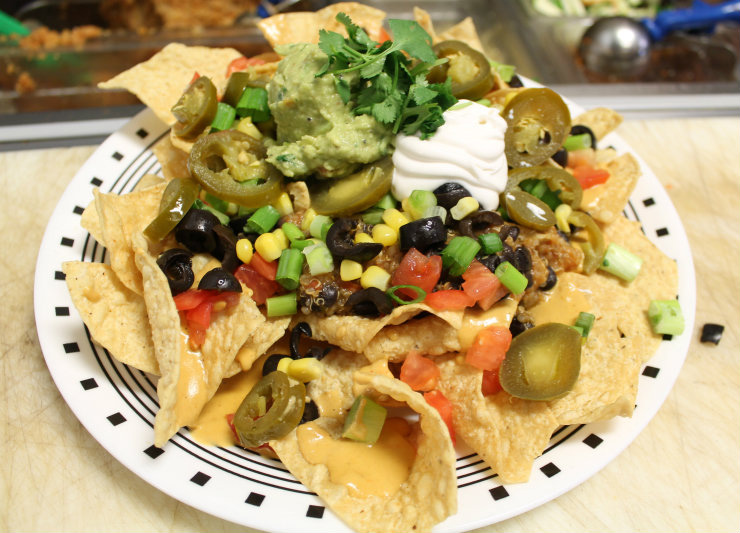 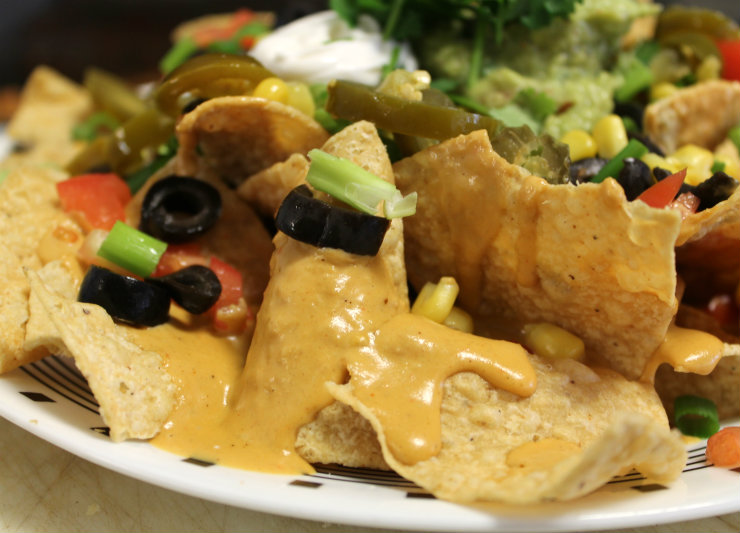 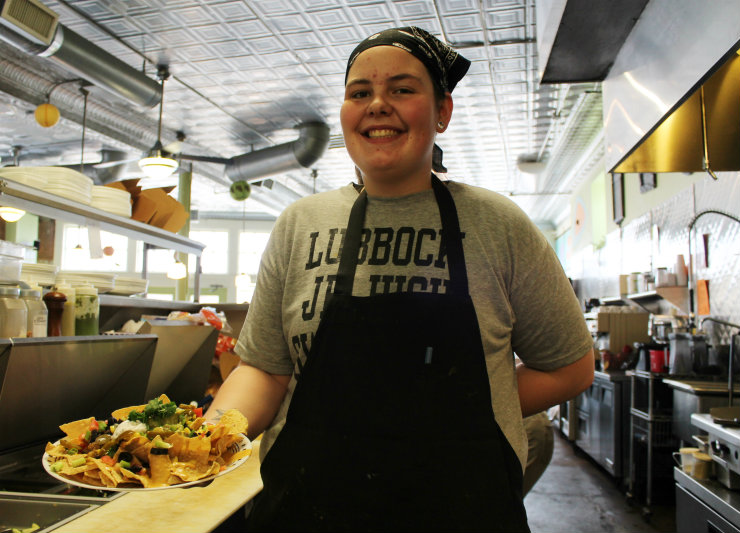 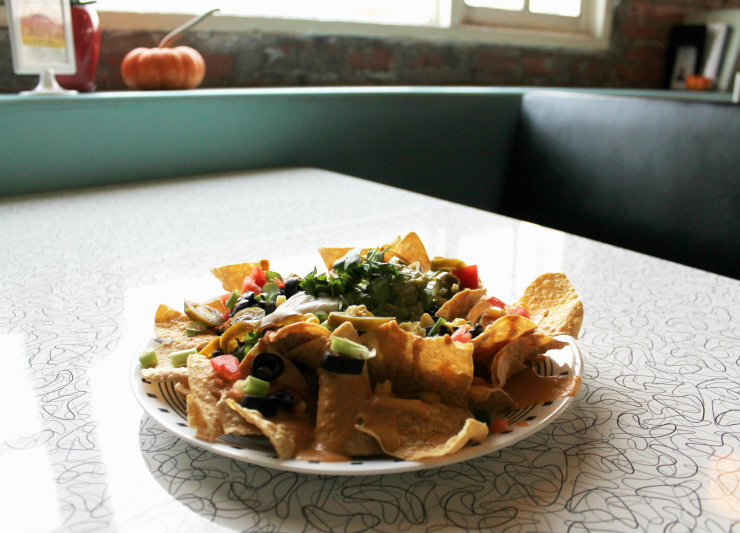