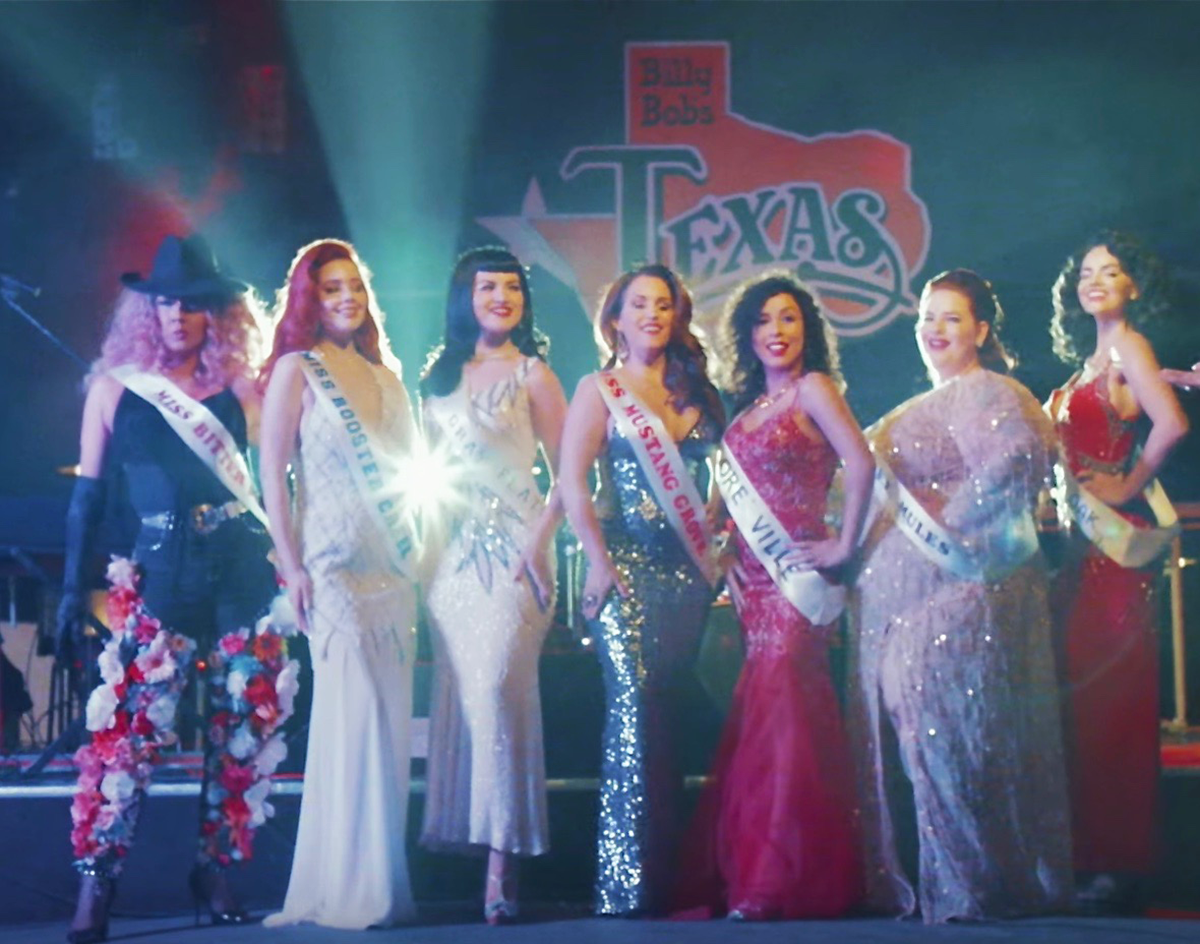 Orville Peck has been something of an alt-country sensation in the last year, and the masked, flamboyant cowboy shows no signs of slowing down. Yesterday he dropped a music video for the song “Queen of the Rodeo,” and in addition to boasting a handful of local stars, it was also filmed at the world’s largest honky tonk — Billy Bob’s in Fort Worth.

Starring in this eight-minute video are Tami Thomsen (of Kirtland Records), burlesque star Minxie Mimieux and Evan Tate, owner of Tate Farms in Rockwall. For all its panache, the video has all the earmarks of our culture’s depictions of cowboys: bull-riding, lassoing, rhinestones, etc. Think Urban Cowboy, but in a world where the OG Gilley’s hosted drag shows.

The video concludes with a caption, dedicating itself to “all the LGBTQ+ and two-spirit community members working and performing in rodeos, ranches, and roadhouses across North America.”

Also being honored at Billy Bob’s is Willie Nelson’s late drummer Paul English, who died of pneumonia at his home in Dallas on February 12.

On Tuesday, March 3, the Fort Worth music venue and dancehall will host a “Celebration of Life” for English, who, in addition to drumming for Nelson, also drummed for Delbert McClinton, Leon Russell, Waylon Jennings and Ray Price, and at one point served on the Farm Aid Board of Directors.

“Paul was proud of his Fort Worth heritage,” said Billy Bob’s in a statement. “He grew up on the North Side and as a youngster boxed in the Golden Gloves and played trumpet in the Fort Worth Salvation Army band. After graduating from Fort Worth Polytechnic High School, he became a regular at some of our city’s more infamous establishments in Hell’s Half Acre, along Jacksboro Highway and, of course, the Fort Worth Stockyards, where he organized some of the area’s more notorious activities.”

Just down the road from Fort Worth in Arlington is also home to a fallen hero who held a proud Texas city heritage — Dimebag Darrell, whose brother Vinnie Paul, became the second and latest member of Pantera to leave this world too soon.

The latter once stated that a Pantera reunion would not have been possible without Dimebag, but for years, fans have floated around the idea of the groove-metal band’s surviving members doing a tribute tour with fill-in members such as Zakk Wylde.

Darrell’s longtime girlfriend, Rita Haney, in discussing that very idea to “The Blairing Out With Eric Blair Show” at the Ronnie James Dio Memorial Gala Awards, said, “I don’t think there could be a Pantera reunion, but I think that his two remaining brothers, [bassist] Rex [Brown] and [vocalist] Philip [Anselmo], if they wanted to honor Darrell and Vinnie, as far as where I’m coming from and what I believe Darrell would believe — because he was the most forgiving person that I know — I believe that he would be honored. It’s kind of a cliché to say, but he truly would be grateful that he meant that much to them.”

By way of other news pertaining to dormant bands from the Fort Worth area, Bummer Vacation is back, and the four-piece is playing two local shows to celebrate the brief occasion. The first of these is Friday, May 29 at Club Dada, and the second is the following night on Saturday, May 30 at Main at South Side in Fort Worth.

These will be the band’s first performances since the start of its hiatus in early 2018.

Moving on, Texas hip-hop festival JMBLYA has dropped its first of three waves of lineup announcements, and so far, the Dallas date (Friday, May 1) has Lil Tjay, bbno$, Kaash Paige, Delly and Gwapmizzle tapped for the affair. The second wave will drop tomorrow, and the third (in which the headliners are announced) on Friday.

Speaking of Kaash Paige, it’s been a hell of a week for local music releases, and she kicks off this subsegment with a new music video for “Heartbreaker”:

By way of other releases, Post Malone has collaborated yet again with the Prince of Darkness himself, Ozzy Osbourne, on the latter’s album bonus track “It’s a Raid”:

Denton metal outfit Doomfall has just released an eardrum-rupturing, self-titled EP, and it is a recommended listen for fans of Melvins, Sleep and Witch Mountain:

Another Denton artist, Lorelei K, is following up her latest LP Lightbender with a stripped-back live EP titled Stripped at Killer’s:

Moving on from there, Dallas R&B artist David Morgan is yet another local artist to drop an EP. This one is titled New Muse:

Arkayist (the amalgamative project of Rat Rios and Honor System) has just released – you guessed it – an EP titled Don’t Drink and Drive:

Breaking this chain of EPs is Oak Cliff’s biggest name of late, Mr. Yella Beezy, who has just uploaded a new single called “Keep It In the Streets”:

Another rapper, another fresh track. BBY BRUJA has just graced us with a new one titled “Toxic”:

Also dropping a single is Sunbuzzed, whose latest, “Sci-Fi-Hi,” (we bet you can’t say that five times fast) just dropped:

And in closing this subsegment, Dondria has come out with a new music video for the cut “Take You There”:

And finally, what better way to close than with three concise bulletpoints of news?