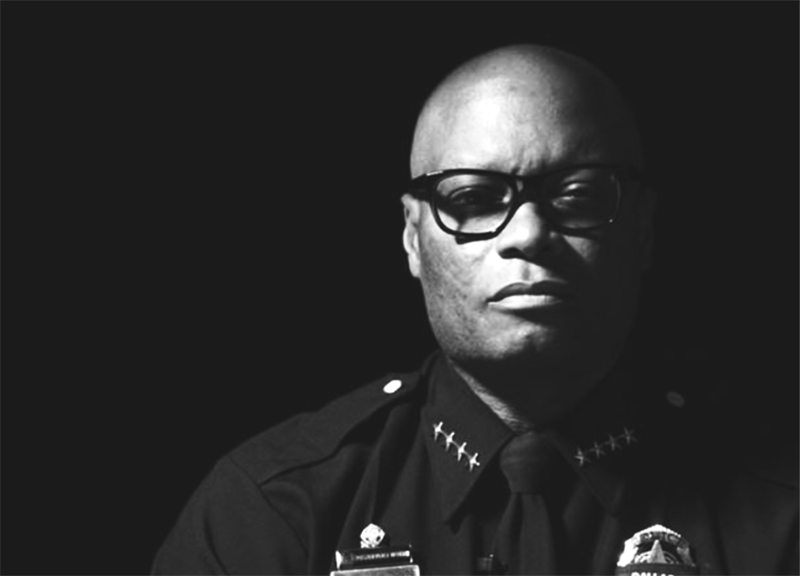 The biggest news in Dallas this past week was the reveal that Dallas Police Chief David Brown will be retiring from his post effective October 22, 2016, which also happens to be the 33-year DPD vet’s 56th birthday. His announcement comes just months after his handling of the July 7 shooting in Downtown Dallas thrust him, and his (model?) department, into the national spotlight — so much so that even People was among the outlets reporting on his decision to step down.

Perhaps weirdly, the very same day Brown announced his retirement, he also appeared in a video from the Black Eyed Peas, in which the pop-rap outfit, backed by various additional celebrities, announced the release of a remixed version of its 2003 hit “Where Is The Love?”

Hmmmm. Coincidence? Or another arrow in the quiver for those who are saying that Brown’s retirement means he’s now setting his sights on and angling for more prominent political positions? Makes you think.

One person definitely headed for bigger and better things is Arlington’s own Maren Morris. The country singer earned headlines — and a No. 1 buzz ranking, thankyouverymuch — this week when she earned five nominations (Album of the Year, Song of the Year, Single of the Year, New Artist of the Year and Female Vocalist of the Year) for the 50th annual CMA Awards, tying Eric Church and Chris Stapleton for the title of most-nominated acts. She’ll find out if she wins when the awards air live on ABC from Bridgestone Arena in Nashville on November 2. Before that, she’ll play her home market when she opens for Keith Urban at the American Airlines Center here in Dallas on October 14.

Another area country singer kicking butt on the awards circuit is Lindale’s Miranda Lambert, who took home the inaugural Merle Haggard Spirit Award at the 10th annual ACM Awards on August 30, this one at Nashville’s Ryman Auditorium.

Another trailblazing Dallas musician too took strong advance of her platform this week is Erykah Badu who penned an essay for Essence about the importance of staying “fully present” and coming to terms with “the full acceptance of who we really are” in order to find joy.

Those are words that might apply this week, too, to Grand Prairie’s own Selena Gomez who publicly revealed that she’s going to be taking some time to herself for an extended period, so as to deal with “anxiety, panic attacks and depression stemming from her battle with lupus.” Well, that or she’s dealing the fallout from her Instagram feud with ex-flame Justin Bieber.

If Gomez is looking for a place to express her rage, one good option might come on September 24 at Texas Motor Speedway as the day-long metal festival Texas Mutiny goes down. There, she could catch sets from Avenged Sevenfold, Deftones, Chevelle, Pierce The Veil, Of Mice & Men, Ghost B.C. and many more, including locals Hellyeah and Mothership. The full lineup for that one, and tickets currently going for $179.50 can be found here.

Or, if its peace Gomez seeks, she might find it on Friday, September 16, at Klyde Warren Park in Downtown Dallas as various local musicians band together to celebrate the International Day of Peace. In addition to a group yoga session, the 12-hour event will also feature performances from (among others) Cure for Paranoia, Dezi 5, Sam Lao and -topic, plus DJ sets from Christy Ray, DJ Vex and DJ Souljah.

Speaking of -topic, his new song with Bobby Sessions and Sikwitit — the creation of which we discussed last week — can now be heard in full. Check that out below.

Another area rap collaboration well worth your while comes courtesy of Dallas producer Gensu Dean, whose new Whole Food album collaboration with Detroit-born rapper Denmark Vessey. Last week, a song called “Black Love” from that release, which features Iman Omari and Dallas emcee 7evenThirty, got a “songs we love” nod from National Public Radio. Hear it for yourself below.

Dig what you hear? Catch Gensu Dean and Denmark Vessey when they perform at RBC on Thursday, September 8. If you feel so inclined, you can also catch the pair during a BYOB meet-and-greet beforehand from 5 p.m. to 7 p.m. at Oak Cliff head shop Royal Hemp.

In need of a more East Dallas-based spot for your low-key hangs with musicians? Starting October 1, the new Garland Road spot Here could be your new go-to. A collaborative effort from Polyphonic Spree manager/choir member Juile Doyle (also a co-owner at Good Records) and Hagfish drummer Tony Barsotti, the spot will feature “creative cocktails, a ‘Southern refined’ menu in a ‘West Texas-meets-Palm Springs’ retro atmosphere,” per a press release. Expect some music, too. Adds the press release: “The lounge will also feature live music, but executed in a casual, organic fashion, without a stage. Doyle and Barsotti say they want people to feel a certain way when they come in, whether it’s the house music or a live performance.”

Surely, that spot would be thrilled if it lasted as long as Tuesday Night Jazz has over in the Arts District. Next Tuesday, September 13, that series will enter its whopping 20th season at St. Paul Church. For more information on this year’s schedule, head here.

Also on the Arts District front, the Dallas Symphony Orchestra announced four additions to its lineup recently. See who here, but know that the gist of things here is that conductor Jaap Van Zweden isn’t necessarily resting on his laurels before he bounces for New York City in 2018.

Why he would want to leave the Dallas area is anyone’s guess. The music scene here takes care of its own, as evidenced by this GoFundMe, in which locals ponied up $5,000 to help the Denton band She Banshee — and its housemates in Mink Coats — get its train back on track following its home and practice space going up in flames. At the moment, a few of those bands’ members are without a house to call their own. But with those donations — and more, which are still welcome — life will go on.

I don’t know that you see this kind of compassion in every market.