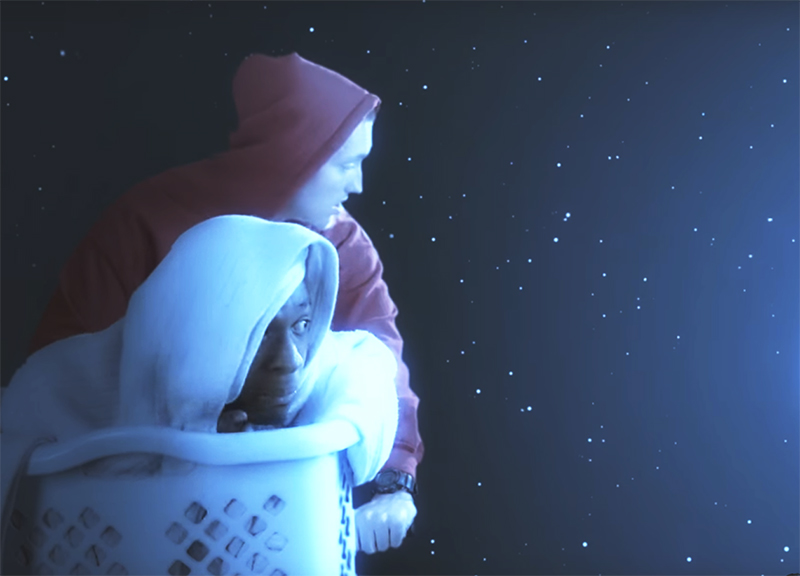 2 The Beat Wants To School Kids In The Rap Game and Lil Ronny Gets Inspired By E.T.

No need to extol the values of a music education in this space — we’ll just assume that everyone reading this gets it — but let’s not act like the ways in which we offer music lessons to our youth are infallible. The main issue, of course, is that schools don’t necessarily teach kids through music they can relate with.

The School of Rock chain has made its name and brand by exposing this misstep and offering kids the chance to form bands and the rock songs that speak to them. But even its courses are lacking. Like, c’mon, where’s the hip-hop?

Well, right here in the greater Dallas area, maybe. A new “after-school instructional music program” called 2 The Beat will, in co-founder Antonio Hall‘s words, “[accept] students at any skill level, with the goal of providing them a solid working foundation in the creation of Hip Hop Music. (Song Writing, Recording, Music Production, Mixing, PR, Marketing, Touring/Booking & Fundamentals of Registering and Licensing Music).” Joining Hall in this venture is legendary Texas rap producer Mr. Lee, the man responsible for many of your favorite Rap-A-Lot cuts.

Says Hall of the venture’s inspiration: “Through my experience dealing with artist here locally, [I’ve seen that] it’s rare that they have all the tools needed to be successful. Too many talented artist are on the verge of making it big or making music a living. We wanted to make that a reality so I partnered with multi-platinum producer Mr Lee to help. I’ll be bringing guest producers and industry executives to help shed light and educate also.”

Hall anticipates the first of seven planned area schools to open in McKinney this fall. A website launch will come in July with pricing and enrollment information.

One area rapper who maybe could use that kind of guidance is Fort Worth trap hero Go Yayo, who, just after the release of his Boom God mixtape, found himself in hot water last week for an appearance he made in early May during a 97.9 The Beat-hosted pep rally for the state STAAR test at Fort Worth’s Morningside Middle School. Neither The Beat nor FWISD invited Yayo, but he showed up regardless. Once there, he encouraged kids to stay in school and warned about the dangers of the rap game. As WFAA reports, parents weren’t exactly thrilled that a rapper who glorifies guns and drug sales was talking to their impressionable children — maybe rightfully, to be honest — but, hey, as the below video shows, the kids were pumped about it.

Perhaps the parent’s wouldn’t have been so pissed if the Beyonce-approved boogie rapper Lil Ronny MothaF was the area emcee who made a surprise visit instead? Eh, who are we kidding? They’d still throw a fit. But that doesn’t mean Lil Ronnie doesn’t have love for the kids anyway. The awesome, Alpha Male Visuals-directed video for his new “Up In The Air” single is filled with references to classic kids movies, from E.T. to Up. It’s tough not to like this guy.

Sorry, folks. The Dallas Boogie still ain’t dead. The inspiration for one of the best lines from that scene’s best songs is, though: MMA icon Kimbo Slice, once immortalized in the Dorrough classic “Ice Cream Paint Job,” died this week at the age of 42. Soon as the news broke, Dorrough was quick to thank the fighter through his social channels.

What is dead may never die, folks. Need more proof? Buried in this Dallas Observer story from Sara Button about Rubber Gloves‘ final weekend is the news that Record Hop reunion might not be a one-off after all. See? When one door closes, another opens.

Speaking of undead things: This Buzzfeed story about how a couple guys from Dallas — including some who would go on to form ZZ Top — masqueraded for a time in the ’60s as The Zombies is a must-read. We’ve known for a while now that there were Zombies imposters out there back in the day, we just never realized there was a local tie. Now, there is, and it’s cool to see.

Another artist with local ties that’s onto cool things of late? The Arlington-sprung Next Big Thing In Country Music, Maren Morris. In addition to praise from Rolling Stone, a glowing review of Morris’ Hero LP in The New York Times compares the singer favorably to another skyrocketing North Texas country product, Kacey Musgraves.

Musgraves, meanwhile, will be among the acts playing free shows at the State Fair of Texas this fall. She’s the biggest name doing so by far, although Nelly, while less hot these days, will also be up in herre. See the full lineup here

Finally this week, we’ll leave you this week with another new rap video, this one courtesy of fresh area face Cobell Damu, whose “No Limits” answers the question of where we can find a rapper as comfortable turning an apple into a bong as he is with visual biblical references.