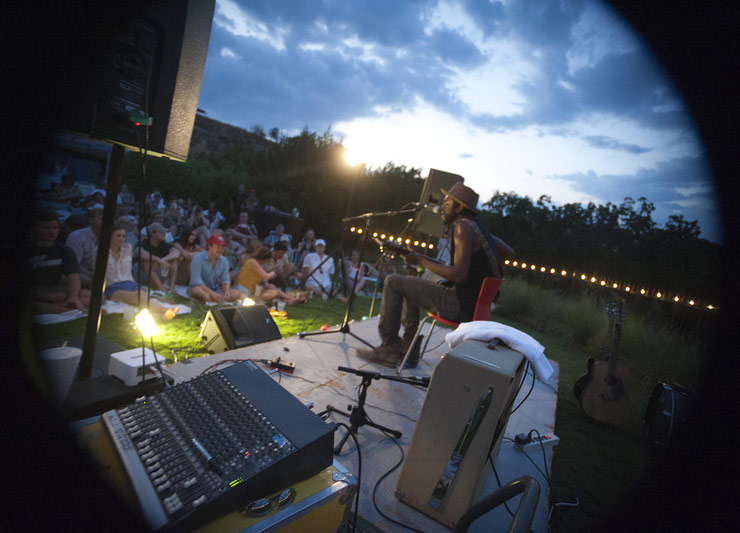 KUZU Gets Funded, Barefoot at the Belmont Moves and Leon and Blue the Misfit Get Their Own Docs.

When one door closes, another opens — or so goes one tired cliché, anyway. In any case, it's at least somewhat interesting that, at just about the same time we learned that Rubber Gloves is preparing to close for good next month, a new Denton independent radio station got once step closer to its launch.

After raising more than $26,000 via crowd-funding, KUZU announced it will now be able to hit the airwaves this summer, potentially even by July, making it Denton's first LPFM station. Read up on the station over at The Dentonite, which has interviews will all the station's major players.

Changes are also afoot for KXT's Barefoot at the Belmont, which was recently forced to find a new home away from its old spot at the Oak Cliff hotel. The station's new locale for its intimate, poolside summer concert series — now dubbed KXT Sun Sets — will be The Pool at Dallas Power & Light. It kicks off later this month, and tickets will be available here one week prior to each show.

For its part, word has it that The Belmont Hotel may have initiated the move in order to usher in an intimate poolside series of its own. Stay tuned for further developments there…

As for other big shows around town, it's business as usual. It was also recently announced that this year's Mad Decent Block Party will once again return to the Zouk parking lot on Friday, August 26. This year's lineup will include D R A M, GRiZ, Kaskade, Keys N Krates, Nina Las Vegas and Unlike Pluto, plus some to-be-announced names. Tickets, which run $62.58 to $90.90, are available here.

Moving on, hey, remember that time when Leon Bridges starred in that Squarespace ad that debuted during the Grammys? Last week, an expanded 22-minute version of that spot was released as a short documentary online. Peep it below while Leon retells his origin story yet again, this time with stunning visuals and trips to the kitchen where he washed dishes, the clubs where he met his band members, the studio where he recorded his debut album and the Dallas thrift shop where he cops his look.

Also getting the doc treatment this week is Blue, the Misfit. The below, 12-minute clip by Misael Sandovol follows the Dallas rapper/producer from his weekly War Club Wednesday DJ night at RBC back to his studio and onto SXSW.

Another new film from a local musician comes from Erykah Badu, who stars alongside The Wire's Michael K. Williams in a flick about a group of Cleveland skaters trying to make it big. The Nas-produced drama opens July 29 in theaters and VOD, but you can catch the first trailer below.

Also on the screen of late was LeCrae, who sat in with The Roots during last Tuesday's episode of The Tonight Show. Catch him rapping over the band's instrumentals while coming in and out of breaks all show long, as we've embedded the full episode below.

In other news, St. Vincent has joined Peter Gabriel and a team of researchers at The Sync Project to explore the biological effects of music on the human body in an effort to engineer playlists to improve memory, help dementia patients and allieviate things like pain or sleeplessness. How rad is that?

Something we reckon appears on many of St. Vincent's playlists is some Pearl Jam. She recently explained to NPR's Bob Boilen that the song that “changed her life” and inspired her to pick up a guitar for the first time was Pearl Jam's “Jeremy.” Fitting that it was a song about Dallas that helped spawn one of its greatest musical treasures.

Speaking of musical treasures, the world's been long-clamoring for a new full-length from Chance the Rapper. It won't have to wait much longer, though, as the Chicago emcee's #Chance3 is set to drop this Friday. In the interim, you can catch up on everything the Chicago rapper has been up to in the three years since the immaculate Acid Rap in one convenient spot, as the Dallas-tied Elz The DJ put together a mix of his own, which he calls Chance 2.5, that incorporates a bunch of the guest verses Chance has turned in on other people's stuff since then.

Then, following in Jonas Martin's footsteps, Lou Charle$ debuted a Mother's Day project of his own this past week, the video for which you can watch below. “Mama Say” appears on last fall's In Transit EP.

Finally, per the Morning News, Paul Simon hinted that he and wife Edie Brickell have recently begun looking at houses in her old Oak Cliff hood. Gentrification level: Complete.

Cover photo of Gary Clark Jr. performing at Barefoot at the Belmont by Will Von Bolton. Got a tip for White Noise? Email us!