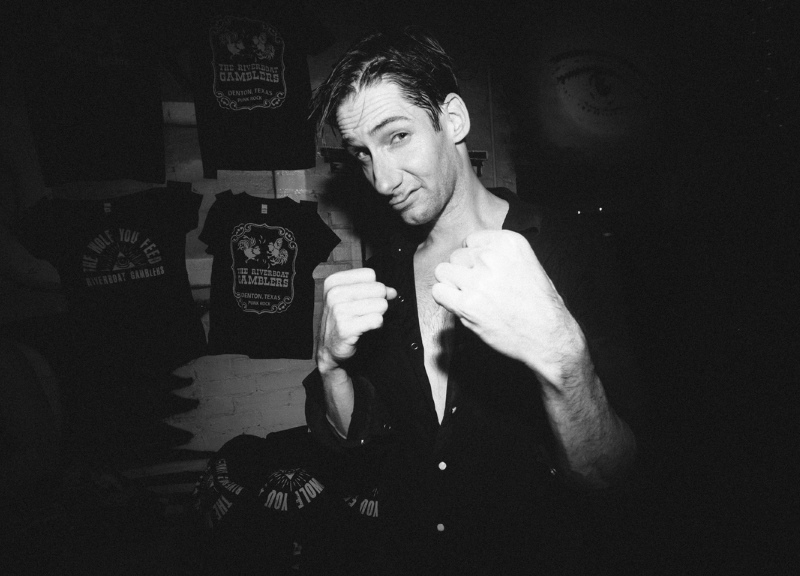 There are just a couple more days left of 2015, and like pretty much everyone else in our line of work these days, we've been pretty nostalgic of late, doing the whole looking-back-at-the-year-that-was thing.

Hey, everybody is doing it!

Take, for instance, our compatriots over at New York Magazine, which recently named its most stylish couple of 2015. Taking home that honor was Dallas' very own St. Vincent and her sometimes ex-model lady friend Cara Delevingne. Says the mag: “Whether wandering around Soho in double denim and mystery coats or matching in see-through Burberry at London Fashion Week, the pair managed to always look effortlessly fashionable — and, well, adorable. (So much so that Karl Lagerfeld gave them their very own row at Chanel, in case you want to readjust your relationship goals.)”

But enough looking back. Lots of other local artists are already looking forward to 2016. Take Power Trip, for example, which, in addition to recently welcoming frontman Riley Gale back home to permanent Dallas residency, will kick off a tour with Lamb of God, Anthrax and Deafheaven on January 15. That one comes through Dallas on February 5 at The Bomb Factory.

Also keeping an eye to the future this week is The Riverboat Gamblers. In mid-April, when Richard Linklater's “spiritual sequel” to Dazed and Confused hits theaters, it'll feature the Denton-sprung punk rock band making a cameo in the flick, as seen around the 1:35 mark of the trailer below.

Also coming in 2016? In a few short months, Provident Realty Advisors will have fully demolished the century-old building that once housed the Starck Club. Why? C'mon, you already know: It's to build some shiny new apartments!

Another thing to look forward to in 2016 is the continued rise of street-savvy Dallas emcee Fat Boogie, who is among the many Dallasites slated to perform at an official SXSW '16 showcase. The date, time and venue for that one is of course still TBD, but in the meantime the rapper just dropped his most promising track to date. Stream and download “Fat Boogie Runnin'” for free below.

Also, far as we can tell, Post Malone is looking forward to continuing his rap game dominance heading into 2016, too. He's certainly not having any trouble lately aligning himself with big name emcees. On top of that 50 Cent track he recently popped up on, Post also appears on Gucci Mane's new “Embarassed,” track alongside Riff Raff and Lil B.

We wonder: Will 2016 also be the year in which the Republic Records-signed rapper finally drops his debut full-length? Jury's still out there, but the Grapevine native born Austin Post did continue to tease that release with yet another new single of his own this week. Check out the blinged-out “Boy Bandz,” which came with its own video, below.

Meanwhile, Daniel Markham continued to spread his vampire wings this week, releasing his third project of the year, none of which from his eponymous, life-ruining rock outfit. Following up his Smoke Paint collab with Tony Ferraro and his Harmony in Hell duo with Claire Morales comes the sophomore effort from his black metal alter-ego, Larry Legion. Find the six delightfully noisy tracks below.

Speaking of alter-egos: The Longshots' frontman Joey Gorman has released some new solo tracks under a new Joey Gorgeous moniker. Recorded in Nashville, the new stuff leans a lot more in the early Everclear direction than the rackety garage of his other project. I dare say it's even a bit poppy.

Anyway, back to the theme at hand: Hot Coffins, for one, seems pretty anxious to get all this holiday shit behind them. That's just as worthy a thing to look forward to as any, we suppose. Take the band's latest video is for I H8 Black Magic track “Thank You For Your Purchase,” which doesn't sound like it drips with any sarcasm whatsoever. The album housing this song was responsible for one of our favorite tracks of 2014, so now's a fine time to revisit it.

Another new video comes from G.U.N. who, for his part, was responsible for one of our favorite songs of 2015. His follow-up effort, “Options,” is just as worthy of some attention, though, and you can give it some with a little click on the video below.

Also, it's a good thing Star Music's video for “No Chill” comes ready with its own video. That way, he can really drive the sarcastic nature of the hook home with rolls of his eyes and quote marks when rapping about how all y'all are “all about that.” Sick burn, bro.

Here's something else a little bit rap-related: After a decade of pretending to be Germans based in Dallas, Lazer finally released a Dirk Nowitzki-themed mixtape. If you can get past the fake German accents, it's actually some pretty strong stuff. But, c'mon, what took so long to add up two and two, fellas?

Speaking of new mixtapes: Baconomics released its latest tape this week, too, and it's not about cellular devices or hall of fame athletes. But, hey, you can still download it for free below.

Not to be outdone, weather-obsessed Dallas emcee Raw Elementz also dropped a new mixtape this week. Appropriately, his follow-up to last year's It Feels Good Outside is called, yup, More Songs From Outside.

More geographically than meteorologically concerned is Rikki Blu, whose new Pleasant Grove EP, who is just the latest area emcee to make a case for Pleasant Grove's realness in 2015. (We see you too, $kaduf.)

Then, just when you thought we were done presenting you with freshly dropped Dallas hip-hop mixtapes, allow us to discuss one that made its debut this weekend: Right Hand of God is the latest release from the golden-throated Mga-Czar, and it's got a real nice Clipse feel to it in parts, particularly on the fourth track, “I Don't Need,” which features a guest verse from A.Dd+'s Paris Pershun. Also making a surprise appearance on that release? Hey, that's our own Podcastin' Rodney Blu — who is related to Rikki Blu, actually (they're brothers, thanks for asking) — guesting on the kickoff, title track. Almost makes you pine for Rodney's old Born Free days, doesn't it? Um, sure, almost.

Then there was Coach Tev, who used his latest track to avoid the Craigslist's Missed Connections section. Per the Dallas Observer, the plan worked, too, helping him finally reconnect with that “cutie” named Chrissy.

Don't all these people know that we already submitted and shaped our year-end lists for the best music of 2015. C'mon, everyone: Get it together!

Finally this week, in case you're still on the fence as to where to spend New Year's Eve, the Lights All Night folks want you to know they'll be donating $1 from every ticket sold to the American Red Cross Disaster Relief Fund in response to last weekend's tornadoes. Attendees can also choose to donate more money on top of that single buck when buying their tickets online.

Riverboat Gamblers cover photo by Karlo X. Ramos. Got a tip for White Noise? Email us!