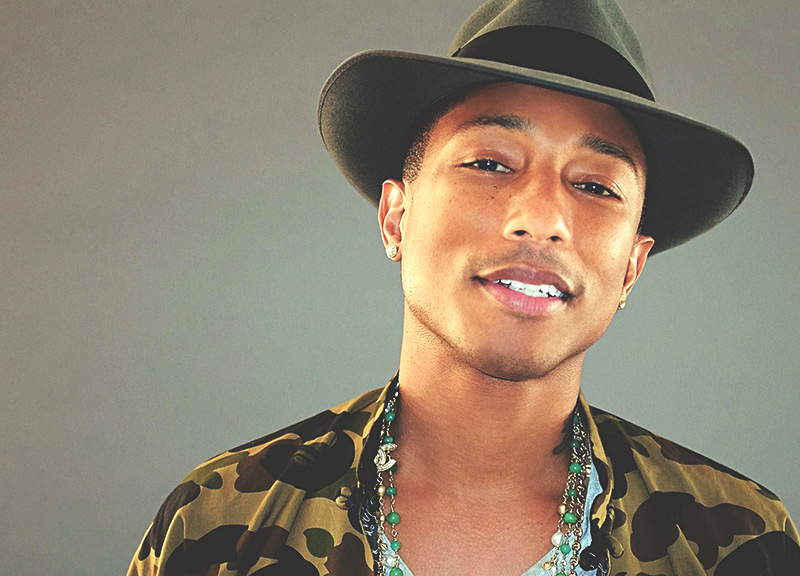 The DSO Will Collaborate With Pharrell, Justus Works With The Game and Slim Gravy Stays Prolific.

Earlier this spring, St. Vincent rocked with the Dallas Symphony Orchestra as part of the inaugural Soluna festival. And in that week of nationally noteworthy events, it was this collaborative performance that may have been the biggest highlight.

Next year, though, the DSO is aiming its sights even higher. Come May 17, 2016, a Soluna project called “Rules of the Game” will bring together super-producer Pharrell Williams, choreographer Jonah Bokaer, scenographer Daniel Arsham and the orchestra for a performance at the Winspear Opera House, reports the Dallas Morning News.

“We wanted to bring Daniel and Jonah to SOLUNA, and in our conversations, this project emerged,” writes Soluna director of festival advancement Anna-Sophia van Zweden. “We are thrilled to present the world premiere performance of this work and to have the Dallas Symphony Orchestra perform original orchestral music by Pharrell.”

Before that momentous occasion, though, a couple of other big festivals will take place in the next couple of months.

In November, of course, the Elm Street Music & Tattoo Festival will take over The Bomb Factory for its upcoming third annual run. That much has been known for quite a while, granted. But organizers of that one recently revealed full lineups and schedules of bands playing. Highlights there include Agnostic Front and Poison Idea on Thursday, November 11; Reverend Horton Heat and Mariachi El Bronx on Friday, November 12; Leftover Crack, The Bronx and Riverboat Gamblers on Saturday, November 13; and Jim Heath (solo, not acoustic) to close things out on Sunday, November 14.

Then, to kick off the holiday season, KDGE 102.1-FM The Edge will hold its annual “How the Edge Stole Christmas” blowout on December 9 at the Verizon Theatre. The lineup there is the very Edge-y Of Monsters and Men, Sublime with Rome, Panic! At the Disco, The Neighbourhood, Atlas Genius and The Struts. Tickets are currently on sale here.

Moving on, you might have heard an in-depth interview with locally-sprung Dr. Dre collaborator Justus on the most recent edition of our Burning Bridges with Rodney Blu podcast. But what you didn't hear in the rapper's most candid sitdown to date was news of his latest big score: Yesterday, The Game released the cover art and tracklist for his upcoming The Documentary 2.5 album and, lo and behold, the disc's 15th track, “Moment of Violence,” features the rapper formerly known as JT alongside fellow Dre proteges King Mezand Jon Connor.

Meanwhile, back in the Dallas hip-hop scene, A.Dd+'s Slim Gravy continued his recent burst of activity, releasing yet another loosie, this one solo and produced by Yung Indiana. Hear it below.

Then there's Brandon Fxrd, who uses a new aggressive-yet-minimal track to remind everyone that he's “been grinding since '09” — or, y'know, since he was 12. Jokes aside, you can just hear the hustle in his voice. And the fact that the youngster is already one of the scene's brightest rising stars starts to really make sense here. The appropriately titled “'09” was produced by Berry Bank$. Give it a listen:

Next up, Riverboat Gamblers announced a series of seven-inch records that it'll be releasing over the next few months. And before the ex-Denton garage punks return to town for the Elm Street Music Tattoo Festival, they premiered the A-side of the first of these releases via Brooklyn Vegan. Here's that one:

Speaking of upcoming releases, Blank-Men's debut full-length, Trash Music for Garbage People, will be unleashed this Saturday, October 10. Before the full thing begins streaming in three days, though, you can get a quick peek at the outfit's latest track, called “Replicant,” which somehow manages to capture the bombastic nature of the band's live shows.

Also, and continuing his free monthly single series, Larry g(EE) released another castoff that won't make it to his full-length record. Recorded not long after the breakout single “Yo Mama,” the gospel-inspired “Love” is a nice third installment in the series. Download it below.

And, finally, Old 97's were the featured performers on the new episode of Ray Benson's Texas Music Scene, playing “Let's Get Drunk and Get it On” at New Braunfels' White Water Amphitheater. In case you haven't figured out how this works, yet, you can watch it below.

Elsewhere: 35 Denton is now accepting bids for 2016 performers; These Machines Are Winning celebrates the release of Architect of Decay on Saturday, November 28, at the Granada; and The Artist Collective's Charlie Grace is bringing her experience booking shows at Crown and Harp and Dada to the House of Blues, where she's been hired as a new talent buyer.

We wonder what that means to the future of the Deep Ellum Block Party.