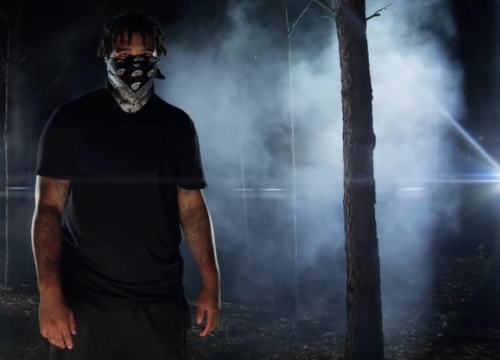 Over the summer, when upstart Dallas rapper G.U.N. dropped his “Johnny Cage” banger, our initial reaction at the time was to call it “among the hypest rap tracks we've heard out of the region all year.” In the following months, our love for the track only continued to grow — something that can be directly attributed to the song's big, dumb, shout-along hook.

Picking up where Migos' “FEMA” leaves off, G.U.N. gasps out the so-fatuous-it's-actually-kinda-brilliant hook, “Wrist like a hurricane / dope, Johnny Cage.”

It's best not to think too hard about it what it means. Bogging yourself down with unnecessary details like the fact that Johnny Cage is universally thought of as the worst player in Mortal Kombat or that one of his big moves is a punch to the nuts — that kind of thinking will get int he way of your enjoyment here.

Instead, you're better of just letting it all go and getting swept up in what's supposed to be a chorus about whipping up high quality drugs that hit harder than a Hollywood actor trying to prove himself in a fight-to-the-death martial arts tournament.

And we highly recommend that you do, because that hook is everything.

Also worth noting: As rugged as G.U.N.'s southern-style raps are from start to finish here, they're matched — hell, maybe even surpassed — by the tough-ass beats JakeGoesDigital provides underneath. In tandem, their efforts makes for a hard-hitting track that not only makes you forget all about how silly that chorus is, but wins over listeners pretty much from the jump.

We proved that much earlier this year when we hit the streets and forced unsuspecting Dallasites to listen to the song. To a person, mostly everyone we aurally ambushed admitted, while having never previously heard the song, that it was definitely something they'd jam of their own accord.

Then again, who wouldn't rock out to this? You almost can't help it. Seriously: That hook just grabs you and gives your ear drums just the kind of unsuspecting nut-punch they need from time to time.