The Sum Of Its Parts. 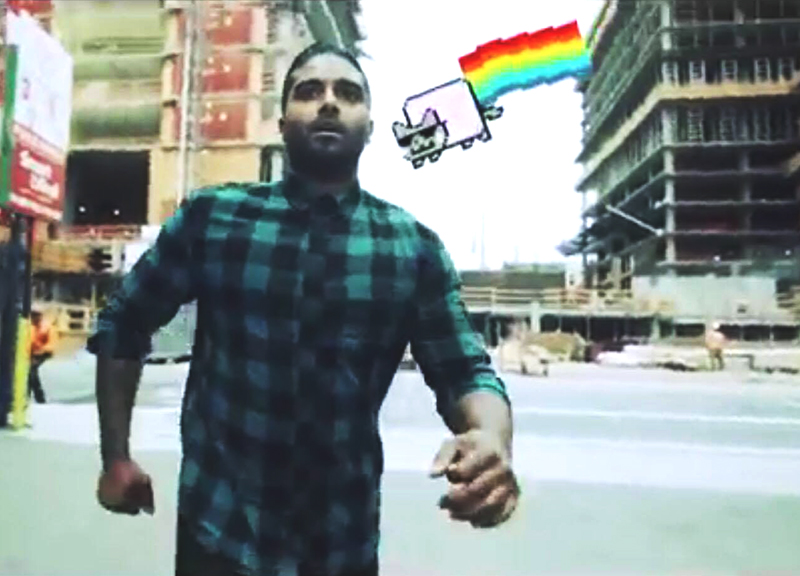 Sum 41’s New Video Is Filled With Memes It Neither Sought Nor Got Permission To Use.

This story has been updated. Scroll to the bottom for the latest developments.

Last week, the Canadian punk band Sum 41 released its music video for “Fake My Own Death,” the lead single off of its forthcoming 13 Voices LP, its first album in five years.

It’s a brash, speedy song that’s fairly befitting of the “comeback” narrative surrounding the October-set album, and its meme-filled, Marc Klasfeld-directed video is without a doubt a fun visual pairing for it:

One problem: Neither the director nor the band nor its Hopeless Records label sought permission to use those memes and images that the band interacts with throughout the clip, thus turning its at-first-blush clever “When Memes Attack!” concept into what will likely become a costly one.

Chris Torres, the Dallas-based illustrator behind the Nyan Cat meme, says the band never approached him about using his character in its video.

“It was brought to my attention actually just a few hours after [the video] was live, when it had less than 8,000 views on it,” Torres says. “It’s since then broken over 2 million views in just one weekend.” [Editor’s Note: It actually has around 1.5 million at the time of this writing.]

In our March interview with Torres, the illustrator talked about some past lawsuits he’s been involved with over his work being used without permission. It’s an ongoing problem, he says when asked about this particular incident with Sum 41.

But at least he’s not alone in fighting this fight. Ben Lashes, who manages Torres and the creators of other memes used in the video (including the photographer behind Doge), says none of his clients were contacted about having their work used in Sum 41’s visuals. It stands to reason that the same can be said of the many of the other images used in the video.

“[Neither] Hopeless Records nor Sum 41 have ever reached out to myself, or either of the copyright holders for Nyan Cat or Doge regarding usage in their video,” Lashes says. “The band may see their blatant infringement as a ‘punk rock’ move to reclaim some forgotten glory, but with Nyan Cat and Doge they are ripping off an independent artist and independent photographer who rely on proper licensing of their works in order to continue creating. As with any infringement of my clients property, we are taking this very seriously.”

Sum 41 doesn’t seem to be, though: “I haven’t been able to contact them,” Torres says. “I know Ben has gotten through to them, but discussions haven’t gotten very far. I don’t know the details, but they don’t seem to be making this a priority.”

Neither Hopeless Records nor Sum 41’s publicist responded to our multiple requests for comment as part of this story.

But the video’s director did — and, for his part, he’s already deflecting blame some, saying that any questions about seeking permission for the memes and other images used in his video should be directed toward the label.

He does, however, say that the idea for the video came from Sum 41 frontman Deryck Whibley.

“[Whibley] contacted me for the video and had the basic idea,” Klasfeld writes in an email. “He wanted to do something that would really make a statement [about] coming back. I just wanted to ensure the band looked great and delivered a killer performance… This was a combination of everyone in the band and myself going back and forth. They were all really involved.”

Klasfeld also downplays Lashes’ assertion that the band’s infringement of Torres’ copyrights was some attempt at a “punk rock” move: “I don’t think there is a specific statement,” he says. “[It’s] very open to interpretation.”

Torres’ interpretation, though, is that the video — which arguably features Nyan Cat more prominently than any other image it contains — could’ve been improved had he been contacted about it.

“I would have made sure they actually animated Nyan Cat properly, and maybe would have even made some brand new ones just for the video,” Torres says.

Instead, he’s now tasked with chasing down compensation for someone else appropriating his work.

“Ninety-nine percent of the time, people go through the proper steps to work closely with me if they want to use my art in their projects,” Torres says. “Unfortunately, some people don’t often follow those rules. If people using my work without consent don’t see value in it, they wouldn’t have used it in the first place. I originally created characters and animation as an independent project for myself, but over the years my art has actually turned into my livelihood. It sucks to see my work used in commercial stuff without permission.”

Update at 5:28 p.m. on July 6, 2016: Torres says Hopeless Records has now reached out to Lashes, passing along word that the production company behind the Sum 41 video claims that the images used in it are a reflection of fair use.

To prove his point, Torres has super-imposed his original Nyan Cat image over the ones used in the video in the following set of three comparison GIFs.

Seen in this light, the two look nearly identical, save for the smaller rainbow trail used in the Sum 41 video — and, in Torres’ words, that their version was “just animated poorly.”

Meanwhile, Sum 41’s publicist has finally replied to our repeated inquiries for the band’s take on this disagreement.