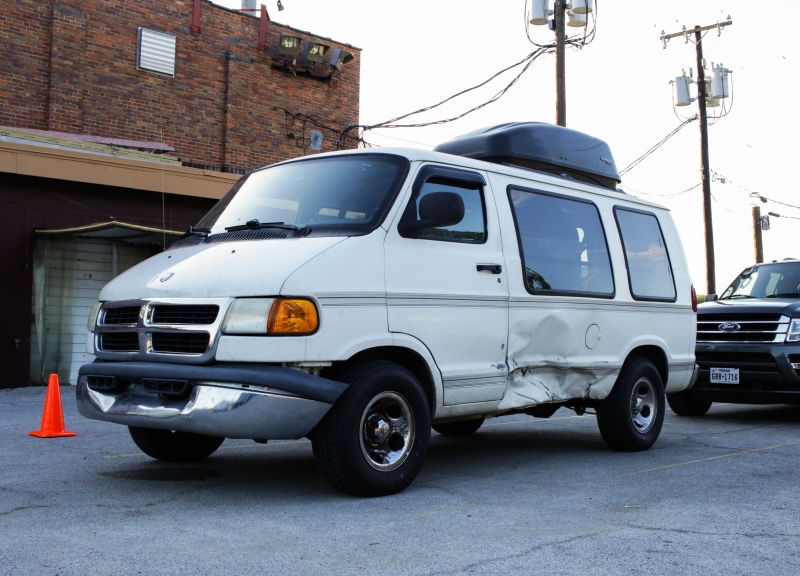 For Nots, Vanna White Is The Star Of The Show.

There was a point during last weekend’s Parquet Courts show at the Granada, where the band’s co-frontman, Andrew Savage, stopped and recalled a chat he had earlier in the day with the clerk at Good Records. He relayed to his audience how he told the employee that he thought there was a good chance Nots would end up stealing the show later that night.

Indeed, the Memphis punks in Nots have become a force to be reckoned with. Since Goner Records put out its We Are Nots debut, the band’s developed an aesthetic that blends no wave and dirty garage rock with just the right amount of punk appeal.

Before their opening turn at the Granada, we caught up with these scene-stealers to find out about their van, a dented wonder with her share of quirks.

So what are you currently touring in?
Natalie Hoffmann (guitar/vocals): “We’re not really even on tour, we’re just playing four shows for Levitation.”

Which is cancelled, unfortunately. That aside, tell us about your van.
Charlotte Watson (drums): “This is a 2000 Dodge Ram B 1500 conversion van.”
Alexandra Eastburn (synths): “It’s white.”
Natalie: “Creatively named Vanna White.”
Charlotte: “So lame.”

How’d you get her?
Charlotte: “Well, we were touring in a different van prior to this one. But, unfortunately, that van disappeared from my life. And then I bought this one. We were actually on tour at the time. We went to SXSW, and we knew that we had an upcoming tour with Quintron & Miss Pussycat, and so I had been looking quite fervently on Craigslist asking around about finding a new vehicle for us. While we were coming back from Arkansas, I found an ad for Vanna and it was a good deal, so my friend George and I went to Lepanto, Arkansas and we met Vanna and took her for a spin and kind of impulsively just bought her.”

Did she come with that big dent there on the side?
Natalie: “I was just waiting for that one.”
Charlotte: “No, see…”
Natalie: “It’s a choice…”
Alexandra: “Her name got changed to Crunchy Vanna.”
Charlotte: “Crunchy V.”
Natalie: “Crunchy V is so gross.”
Charlotte: “It’s so gross. We don’t really call her that. Don’t call her that. She doesn’t like it.”
Alexandra: “She gets offended. She doesn’t want to purr.”
Charlotte: “So, about this van…”
Natalie: “We are funny. We’re so funny.”
Charlotte: “So we got this van, and then I went to work, and I was at Goner and so I was showing Jack and Eric and I was like, ‘You guys, you gotta check her out, she’s awesome.’ They were like, ‘Yeah, she’s great.’ It was the first day I had her, and I spent every little penny I had buying her, so I didn’t exactly have insurance yet. Then I went for a spin to go buy us burritos and then I got T-boned by a woman who didn’t have insurance either. I got her towed, got the door to close and nothing mechanically was effected by the dent on the side of the van, so it would cost more than I paid for the van just to fix the dent. It doesn’t really do anything, so it’s just kind of there. It’s kind of good security. But now that we’re talking about it, it maybe is not. I mean, we’ve driven all over this great North America in this van.”
Alexandra: “And the terrains of Canada.”
Charlotte: “Yeah.”
Natalie: “Through the mountains.”
Charlotte: “That’s true.”
Alexandra: “Through Montana. She’s seen it all.”
Natalie: “And we get four princess chairs. I mean nobody has a middle seat. Nobody’s like ‘goddammit, it’s my day.'”
Alexandra: “It feels like a party barge.”
Charlotte: “It does kind of feel like a boat.”
Natalie: “Lap of luxury really.”
Alexandra: “We’re all cruising along in this sea of life.”
Charlotte: “We’re all generally equal in comfort, which is good. No fighting over seats.”

Who usually does the driving?
Natalie: “Charlotte drives a lot. I get motion sickness. So I try really hard because I like to drive, too, but I take a lot of medicine.”
Alexandra: “I’ve driven like four times.”
Charlotte: “Yeah, we take turns driving at night.”
Natalie: “I’m so sensitive in the car it’s horrible. It’s a horrible thing for a touring musician.”
Alexandra: “Natalie says I’m a passive driver.”
Natalie: “She is.”
Alexandra: “I drive my little car beautifully, but when I get in the van, something different happens. I don’t know, it’s just different.”
Natalie: “Everyone approaches the van differently.”
Alexandra: “I need a booster seat.”
Charlotte: “I drive it all the time so I feel like, maybe, because she’s a little quirky, that I’m a little protective. But I also just really like driving and especially when we start a tour, I’m like ‘Yeah! Let’s go!’ I get so stoked just to drive for a long time. I just like it. There’s something very calming about it for me about travelling.”

What are some of Vanna’s quirks?
Alexandra: “She’s so unusual.”
Charlotte: “Well, she has less quirks now with all the fixes here and there. She’s got a little frowny bumper in front. We got in a little fender bender in Georgia, which was so dumb and terrible. But we took care of it and now she’s just a little frowny. But driving her is fine. She just feels like a boat, and you can’t really see out the back because of all our stuff, so you have to be present while driving the van.”
Meredith Lones (bass): “And we have a little hamburger on top.”
Charlotte: “We have this, when we go on long tours, we have a lot more stuff. Like more merch and more personal items, so it’s good to have the camper on top, but man when I drive this thing around town, I just feel like a sore thumb. I just feel like everyone knows where I am all the time.”
Meredith: “We have scraped the roofs of parking garages.”
Charlotte: “That was in the other van.”
Meredith: “Oh, that’s right. Well we have done that.”
Charlotte: “The hamburger means we can’t really go through drive-throughs which sucks.”
Natalie: “I mean, it’s only at like 3 a.m. and when you’re drunk and really want a Mexican pizza. That’s like all you need and you’re feet from it.”

How clean do you guys tend to keep the van?
Alexandra: “We keep it organized, but inevitably it becomes disheveled.”
Natalie: “It’s smelly.”
Charlotte: “Food and…”
Alexandra: “We’re conscious. We try to throw things away at gas stations.”
Natalie: “I leave patty melts under the seat.”
Charlotte: “I found it a month later. It looked the same. It was amazing.”
Meredith: “Sometimes someone gets a salad or a sandwich in the bottom of their purse and they don’t remember.”
Natalie: “Sometimes you pull meat out when you’re trying to get your lipstick out.”
Meredith: “That happens.”

Is there anything else you’d like to add about Vanna White?
Alexandra: “I’m grateful.”
Charlotte: “I mean, I love her. You know, sometimes I look at other vans and I’m like wow, that looks comfortable or that looks cool but I love Vanna, you know? I love her.” 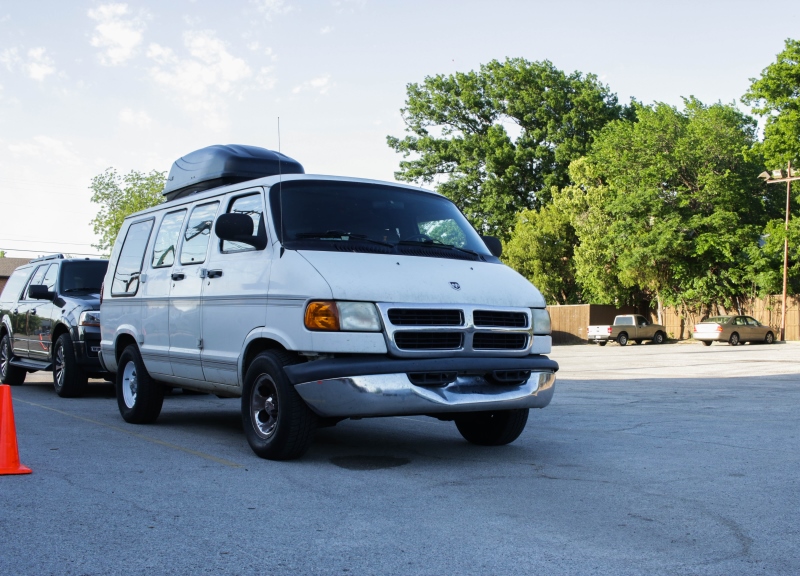 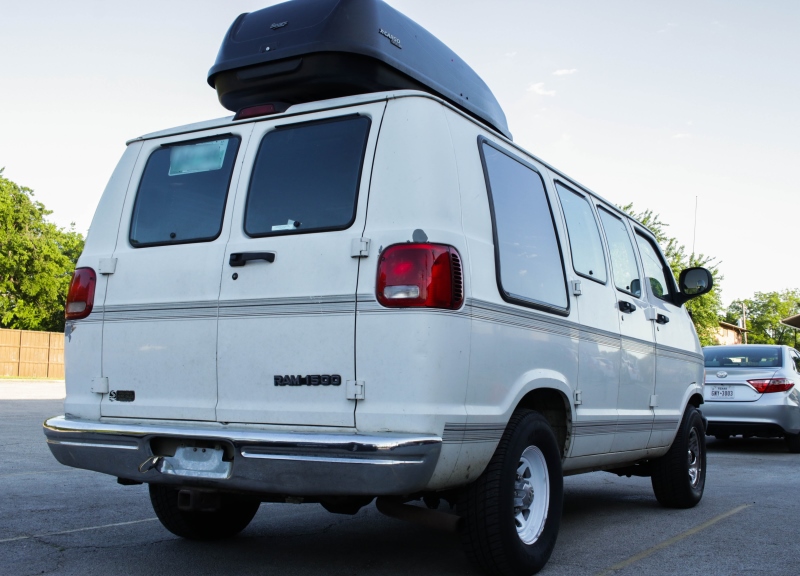 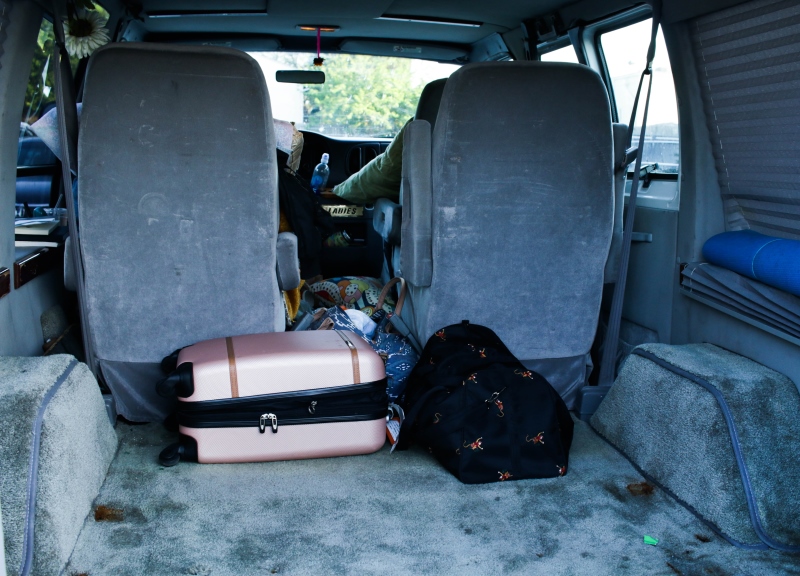 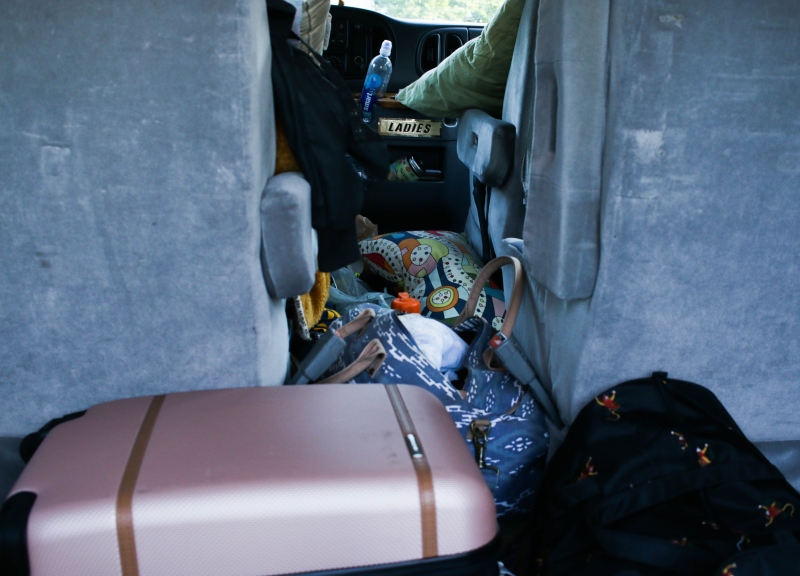 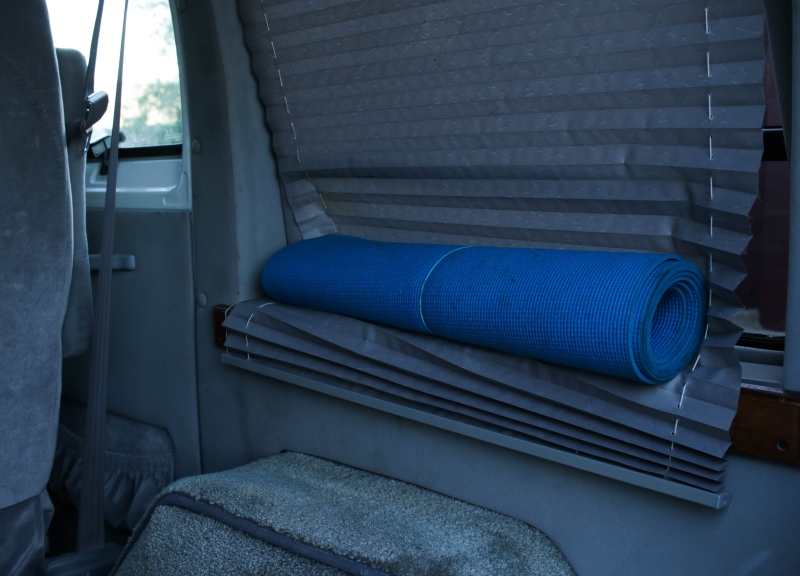 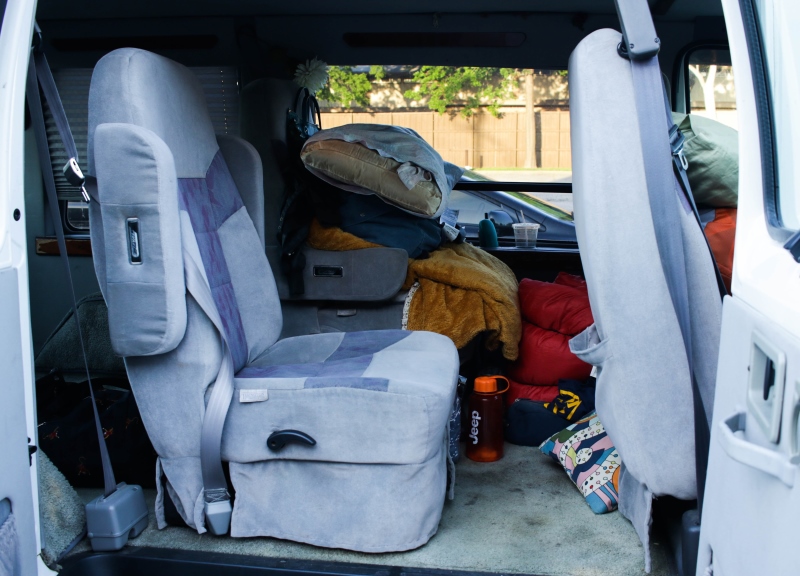 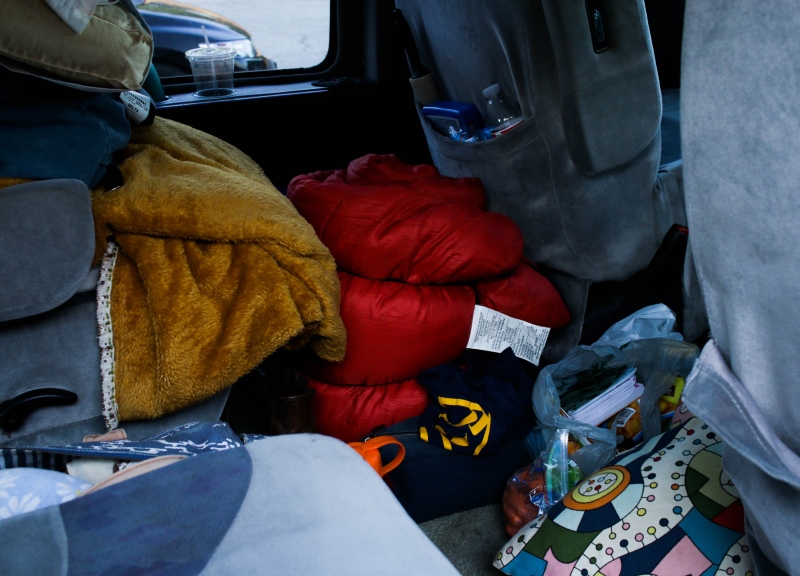 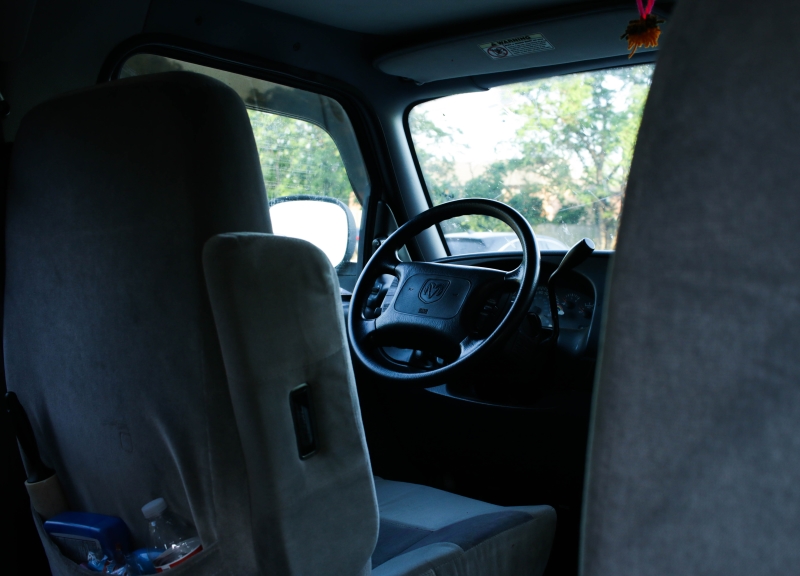 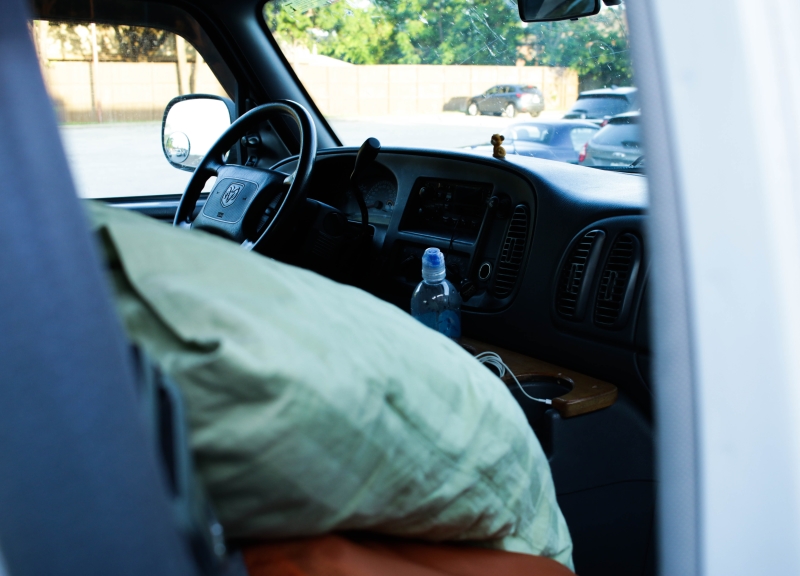 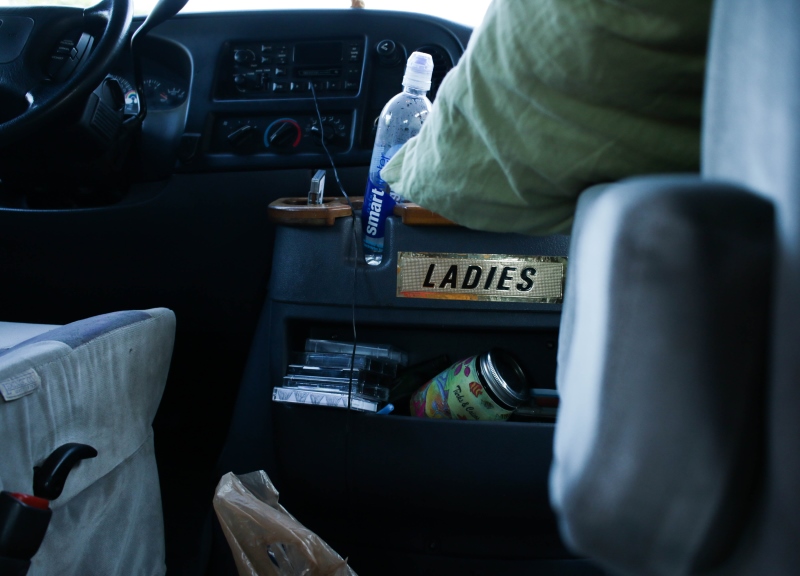 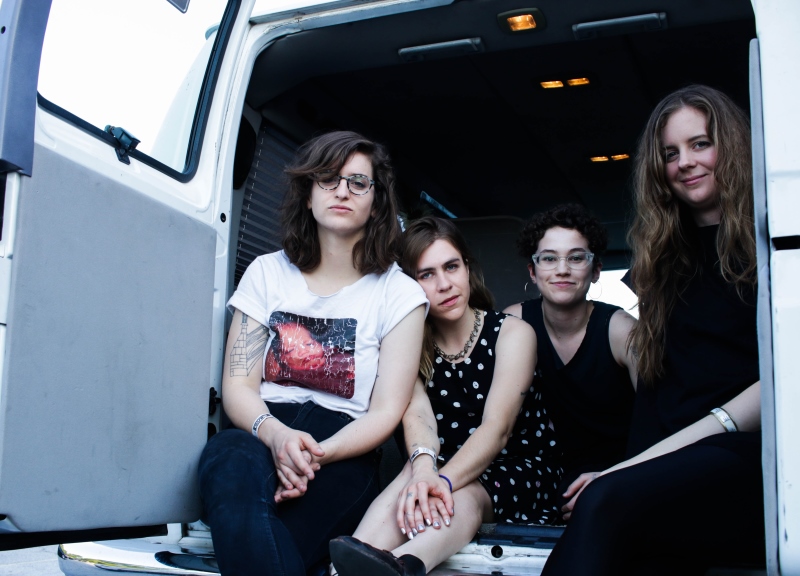